a weekend of coffee shop networking

Once, a man whom we can only assume must have been truly desperate responded to a Craigslist personal ad which bore only a single coy statement, “Call for a good time.” He showed up at the requested meeting place, and was whisked off for a day of exhilarating, platonic adventure, culminating in skydiving. Needless to say, he had a good time.

This story has grown near and dear to my heart in my lifelong quest to become the ultimate altruistic troll, but I bring it to you for a half-reasonable reason: this weekend reminded me of it.

Several weekends ago, I was having dinner with some ’08s who are now full-time techies in San Francisco, and one of them casually remarked, “Oh, I saw Mitra the other day…”

Allegedly, I frothed at the mouth and rasped, “Mitra?? THE Mitra?” (Mitra, for those of you who don’t know, was the original admissions blogger, and predates Ben, who predates Chris, who pretends to be old. I witnessed her last year of blogging the year I started thinking about applying to MIT. (Sorry, Mitra.))

So after stalking cross-referencing the alumni directory with Facebook, I shot off an email to Mitra and Sam with the subject, “this is not a craigslist proposition,” just to be clear.

Mitra’s response: “I don’t know about you, Sam, but I am quite disappointed this is not a craigslist proposition. Those are the best.”

Sam’s response: “Hey Rachel! Thanks for the totally non-creepy intro!”

And so we met up for coffee. In the true spirit of SF, our less-than-loud conversation was quietly tolerated by plaid-clad hipsters wincing at us over their Macbooks with saintly martyrdom. One hipster actually retreated into a corner of the coffee shop after we sat down. By the door, the shop’s token eccentric was matter-of-factly spinning a hank of wool wrapped around his arm onto a wooden spindle.

Mitra: So did you email us just because we were in the area, or because we were your favorite bloggers?
Me: The first reason…
Mitra: Oh.
Me: ..and also the second.
Mitra: TAKE THAT, MOLLIE

Apparently, when Sam searched his email to find our meetup plans, he stumbled upon another email from me…as a prefrosh.

Sam: I think I owe you a postcard from a few years ago.
Me: Huh? OH GOD.
Sam: Yeah, I put up a letter addressed to stalkers in my public folder, and you found it.
Mitra: Actually, after he put it up we timed how long people took to find it. Our friend found it in less than a week.

But alas, my stalker cred has diminished over the years. I didn’t even know, for example, that Sam’s initials are S.A.M.

We also talked about Real People Things, like bad puns, and Ok Cupid shenanigans, and how gap years rock, and how each cover of Oprah is better than the previous one and this month’s cover was so good that they’ll just have to terminate the magazine now because they can never, ever top it. 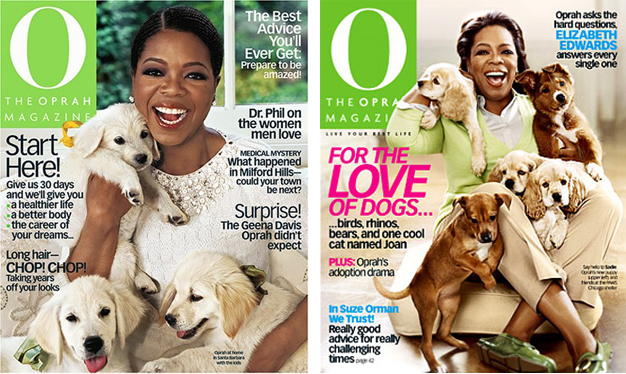 (Actually, I think Sam is just obsessed with Oprah.)

Also, how being as networked as possible on LinkedIn is a good thing, although it can lead to some awkward situations, like when the MIT alum CTO of some hot new startup asks you how you know someone they found you through and you’re like, “Uhh, I think I met them at a Burton 1 party last year. Oh, we’ve networked at a few tech-related social functions.” Which indirectly leads me to our conveniently meta-referential parting words:

Mitra: Whenever you have a blogger meetup, I feel like you’re obligated to blog about it.
Me: Definitely! But how can I construe it as compelling and relevant?
Mitra: Maybe it can be about the strength of the alumni network, or something.
Me: Nah, that would be kind of preachy. LET’S TAKE AN EXCITING PICTURE INSTEAD!
Sam: YEAH! 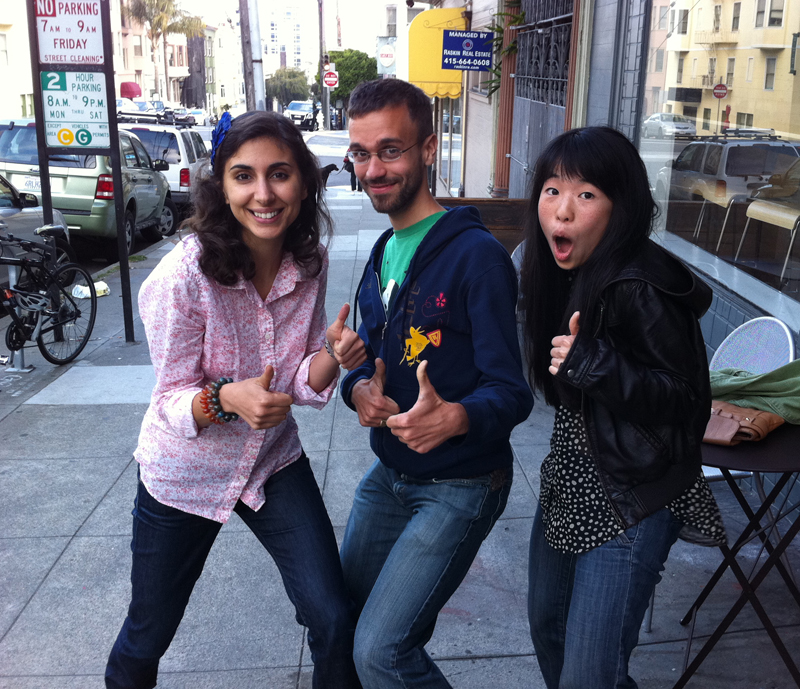 In lieu of the strength of alumni networks (and I already implied it, so you get it for free anyways), here is the theme of my weekend: coffee shops. Rather, shops that serve coffee. To be fair, every shop in SF seems to have a dual specialty in coffee. Bookstore-coffee-shop combos are pretty common, as are coffee-shop-creperies. The most unexpected combination I’ve seen so far was an espresso bar that also rented videos. It’s not like someone just decided one day, “Oh, maybe we should also rent videos, so people can browse them while they drink their espresso, even though they can’t watch them while drinking their espresso,” or vice versa. No, someone clearly thought this through. 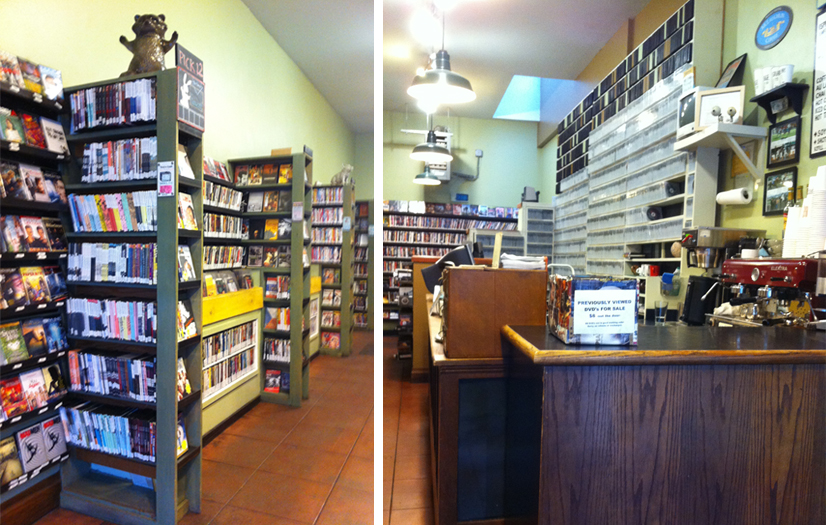 For some reason, every coffee-shop-that-is-also-actually-another-kind-of-shop in San Francisco is also an art gallery.

For dinner, my roommate Tiffany’12 and I went to a coffee-shop-diner-art-gallery that also served dinner, but it was too late for dinner, so they were only serving breakfast, but they were also out of breakfast food. We were like, “Do you have pasta?” “Do you have sandwiches?” “Do you have eggs?” “Okay, do you have food?” and finally went next door, where we had…breakfast. For dinner. At a coffee shop that was also a diner and an art gallery and served Middle Eastern food. I swear their matching illustrated chalkboard menus even had the same handwriting as each others’, as well as the coffee-shop-creperie-art-gallery near my apartment.

Later, I gave my leftovers to a hobo kitten named Macaroni, whom we had encountered earlier on the way to dinner. 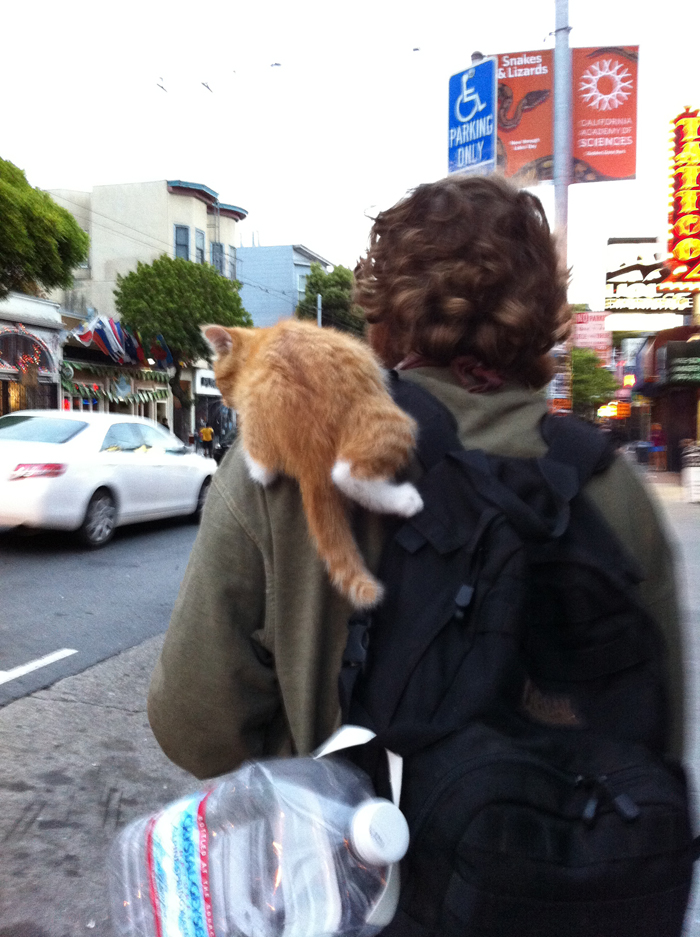 I give entirely too much credit to coffee shops, though. The MIT network really is a fantastic thing to be a part of. While scrounging for housing at the beginning of the summer, I crashed with an ’08 I met through an alum of my floor, and I actually ended up taking over a ’10’s lease when he decided to move out for the summer. On the Facebook employee shuttle, I happened to sit next to an ’03 in HR who noticed me posting a blog entry to this very site and wanted me to write for the Facebook engineering blog.

Also, Dropbox employees keep giving me free storage. Try getting a punchcard for that, suckers.

10 responses to “Call For A Good Time”