It’s raining. I’m sick. No lab today, because the postdoc in our group also picked up whatever viral assemblage has been partying in my lungs lately. Circumstances are ripe for a brash inbox reorganization- as of this writing, I have exactly 11111 unread messages in Gmail. Initiative was taken. Somewhere along the way, I got lost in a cyber-attic of unsent drafts and attachments old and neglected enough to be hanging out in cobwebs instead of on the interwebs (Pun #1, check). Check out what I wrote to myself 1.7 years ago during my first visit to MIT:

I went downstairs and took full advantage of the free breakfast buffet. And then went to the top floor of the tallest building in Cambridge (later that night, the lights in the building would be turned on to spell SOX when seen from afar).
¬†
10:00: off to the MIT tour. It was pretty much like every single college tour ever created. I did learn by observation that MIT is about 50% Asian.

11:30: I met Mace (short for MeiHsin), the student that I would spend the night with. She reminded me of Helena Lam*, quite eerily. We talked, and then I had to run off to lunch.
¬†
As it happened, our hotel was across the street from the best seafood restaurant in Boston (according to the placemats). It was pretty excellent. I had clam chowder that had also been eaten by ex-presidents and other people who used to be important.”

*Helena Lam is a girl I knew in high school who liked gardens, drove like a murderous grandmother, studied abroad in Japan, and never sent me a postcard.

Notice that even in my formative years, I showed precocious signs of a furious ambition to eat everything ever created, ever (free breakfast buffet, seafood restaurant, etc.). The story of my day goes on to include a lavish, adjective-laden description of a Boston sushi buffet that won my everlasting admiration.

8:00: Headed over to McCormick Hall (the all-girls dormitory) and met up with Mace. It was still relatively early by MIT standards, so we headed out and looked at the tunnel system (MIT has tunnels that connect through virtually the entire campus. So one need not ever see the light of day). Disconcertingly, there was nobody else down there at the time. I was awed and astounded by an elevator that connected the tunnel to the outdoors. In effect, an outside elevator. In effect, a pair of metal sliding doors¬†in the middle of¬†trees or something (I don’t actually remember, so great was my amazement).
¬†
And then Mace called her computer science friend in Simmons Hall so that we could visit. It was a 10-minute walk, some of it along a highway. Honestly, Simmons Hall beats the outdoors elevator any day. The architecture was mind-boggling. The furniture was from Ikea in 2020. And the lights in the elevator were red-tinted. Says the comp-sci major, “If you press a certain combination of keys and go to a certain floor, the elevator will play Christmas music.

First of all, Yan, Vassar St. is not a highway. It’s barely an alley. You just called it a highway because you almost got hit by a car. I also like how you arbitrarily decided that Simmons Hall is better than an elevator. Critical comparison skills right there.

Additionally, I’m digging your grammer-bookish, pseudo-antiquated sentence structure: “one need not ever see the light of day”, “so great was my amazement.” Somebody must have told you that imitating Ovid was going to be the new trend in blogging.

Thursday:
Woke up at 8:30 AM to the sound of a generic alarm clock. Mace slept until 8:31, which is when I woke her up. It’s not a big deal from MIT students to¬†be prompt¬†because students aren’t counted as late unless they arrive more than 5 minutes after class starts. We had some cereal, and she worked more on her paper.
¬†
And then she walked with me to 6-120, where a Physics class was in progress. I went in and pretended to be a student, which was easy given the 100-person attendance at the lecture. The topics were potential energy curves, momentum and collisions. It was probably one of the greatest classes I have attended in my life (definitely the best science class). The instructor was witty and brilliant. The students were quick. And it’s almost redundant to mention that the topics were covered¬†swiftly and in-depth.

Make no mistake, I was straight-up enamored with 8.012, the afore-praised Physics course that instantly earned a spot at the top of my “101 Greatest Science Classes Ever Attended” list, which I didn’t even know I had. Afterward, life was never the same; I hopped on a plane, went home to my 300-person public inner-city high school, slagged through hours upon hours of the most intellectually-anemic science curricula ever devised, and kept on raving about Taylor expansions of potential energy curves to anyone who wouldn’t listen, which was basically everyone.

As mentioned previously, my first MIT visit was a few watts short of dazzling, to say the least. To say the most (can I use this expression?), it was borderline miserable. Once in a while, however, some part of my brain accidentally spills nostalgia all over my buried memories and forgets to grab the paper towels until I’ve already stepped halfway into a dreamy-edged flashback. This time, I’d literally stepped halfway into the MIT admissions office.

Right now, I’m looking at yesterday afternoon through wide-angle lens, and I absolutely cannot locate the errant desires that nudged me into the plump, overcrowded middle of a MIT admissions info session/ tour. Why did I pretend to be a prefrosh, despite being recognized as soon as I glanced into the doorway? Why did I listen, numbly captivated, to McGreggor Crowley spout admissions factoids to jittery prefrosh-and-family as I cringed behind a family from Ohio and pretended to scribble notes in my lab notebook? Why did I follow the tour guide for an eternal 70 minutes through the most nauseatingly familiar sights on campus? No idea.

But, you ask, did you learn? Did you walk away with pages upon precious pages of journalistic insights into the heart of MIT’s self-image? Were you inspired to analyze the filtering of details that the Institute projects onto its potential students? Or to deconstruct MIT’s officially-sanctioned attempts to unironically, un-self-consciously encapsulate the dichotomy between Work Hard (selective admissions, world-class academics, heavy courseloads, etc.) and Play Hard (crazy projects, hacking, making fun of Caltech, crazy hacking projects as a means of making fun of Caltech, etc.)?

The answer is, nope, sorry, I’m not David Foster Wallace (yet- I’m working on it. Summer project #283 is to become DFW before Christmas.) On the other hand, I did learn that there is a life-sized plastic cow in the Stata center. The tour guide sort of pointed at the plastic cow and said, “MIT has a fun and vibrant student culture, as indicated by this cow, blah blah steak blah blah dome hack blah.” (Note: the editor has taken considerable artistic liberties in the insertion of “blahs.”)

College tours, no matter how crisply presented or enthusiastically narrated, are shallow by default. The rambling complexities of MIT’s blood and pulse are, by necessity, compressed into a rapid-fire slide show of snapshots, symbols, and synecdoches: hence the passing overhead glimpse of a plastic cow, the oft-repeated anecdote about the Caltech cannon, the pigeonholing of dorm culture into one-word descriptions like “social” and “quirky” and “studious,” the elevation of the Student Center into a pulsating nexus of campus life, the conspicuous display of MIT’s hacking ethics, the boasting of barely-meaningful statistics (“more than 500 student groups on campus!”), the 2.007 trophy, the fact that Kresge is exactly 1/8th of a sphere, the height of the Green Building, the firehose water fountain, Oliver Smoot, and so forth.

But with regards to baiting applicants, the splicing of MIT culture into a multicolored whirlwind advertisement works beautifully. Given the time and resource constraints of the admissions info sessions and tours, I’m not convinced that anyone could do a better job of profiling MIT’s personality in an attractive yet mostly-honest way*. Although oversimplified, the image jigsawed together on every single tour is acceptably accurate and, more importantly, entrancing to exactly the right minds. On some subconscious level, the message is, “Here’s what your life could be like if you came to MIT. Go ahead, insert yourself here. You, yes you, could be the person who puts a plastic cow on the Great Dome.”

*Resource constraints aside, my perfect introduction to MIT involves use of blowtorches, soldering guns, LED lights, lots of paint, and free hummus.

Fine. I half-believed it 1.7 years ago and so will the starry-eyed high schoolers walking into 10-100 on Monday morning at 10 AM (or 9:45 if they’re extra ambitious). No harm done.

Yet (imagine this “yet” in boldface, 16-point font), some part of me is still writhing in refusal to compromise with the wholesale simplifications incarnated by the plastic cow. Spend a year on campus, and you realize that MIT is infinitely more than the sum of its symbols, its anecdotes, its freeze-dried relics of bygone pranks. Sometimes, I think of MIT’s culture as a fire, breathing and evolving, feeding off the oxygen of fresh ideas and consuming the dead matter of the past. It needs you as much as you need it, which is nearly as much as I need hummus. You try to capture it, to show it to others, but it burns through your hands*. So you give up and just tell people to come to CPW.

*Sorry, does this sound too angsty? Should I change it to “but it makes your hands uncomfortably warm, yet not warm enough to require a visit to MIT medical?” Am I writing this out loud? Oops.

And what about the blogs? Think of mine as a tiny corner of webspace where I can freely play with fire*. Also, I secretly want to 1-up the plastic cow in showing you what life at MIT is like.

*In a safe, police-approved way.

The plastic cow, for instance, did not partake in a spontaneous midnight baking war that culminated in the invention of . . . (insert suspense here) 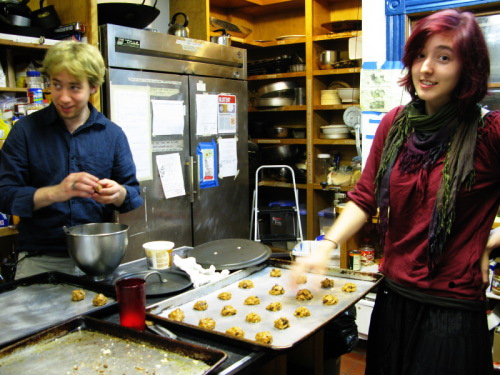 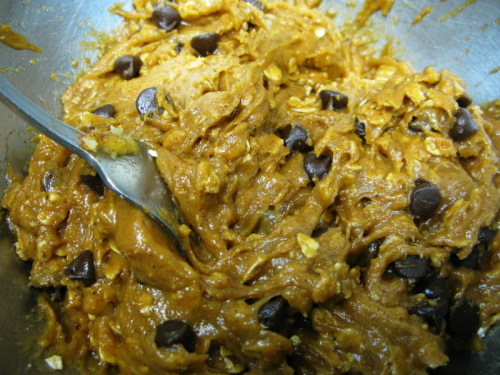 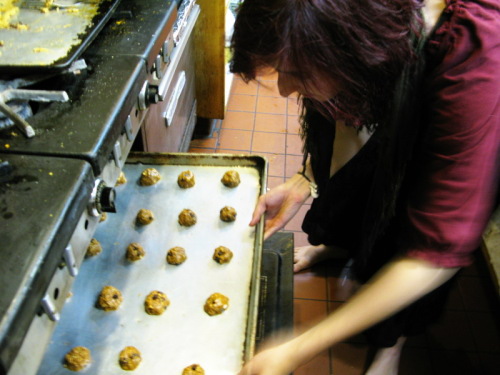 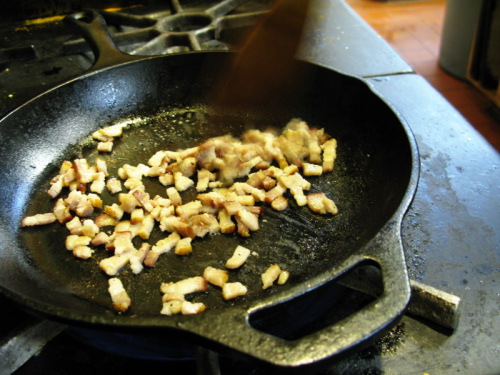 Never before and never again will I label a cookie as revelatory. The first bite screamed with passive-aggressive, rebelliously delicious rage at civilization’s slavery to flavor combos that can be parsed by the human sensory system. 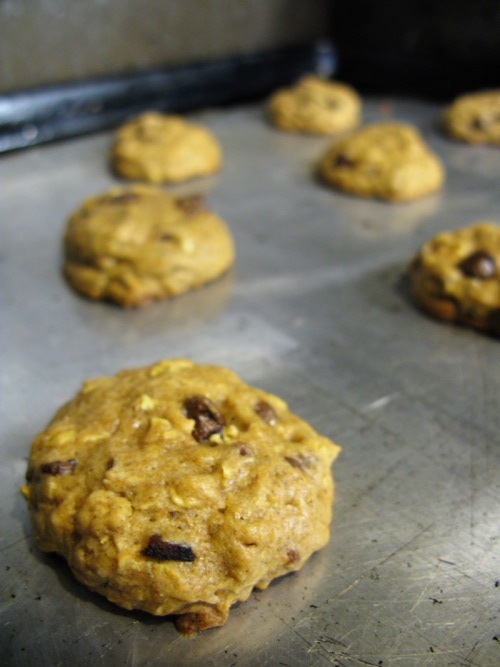 I had insomnia for two nights afterward.

And then I decided to check to see if I could fit into Jared’s backpack while preserving my topological integrity. The answer was yes. 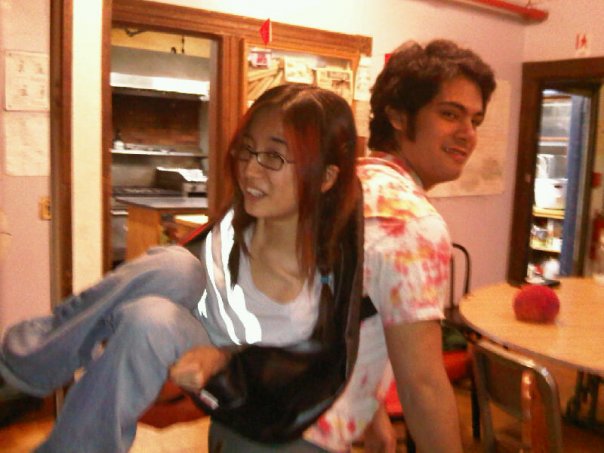 So anyway, you should apply to MIT.