I have run out of things to write about because nothing is happening in my life right now, other than finals week and Celeste. Celeste is the first video game I’ve picked up in months, mostly because my friends convinced me to play it. I’ve had a copy for a while now from one of those game bundles and started playing two weeks ago or something. It’s a great game, and I’m glad that I played it, and now I’m going to shower praise on it and maybe convince you to play it too. 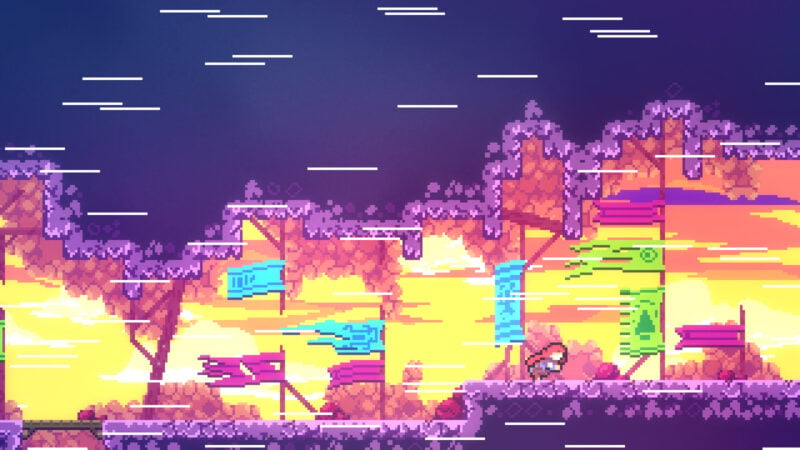 Celeste makes it with a limited set of controls. Madeline can move. Madeline can jump. Madeline can climb walls, but she has limited stamina. Madeline can dash once in one of the eight cardinal and intercardinal directions, and the dash recharges when she touches the ground or touches a crystal. That’s it: movement, jumping, climbing, dashing. That’s four directional buttons, and one each for jump, climb, dash. 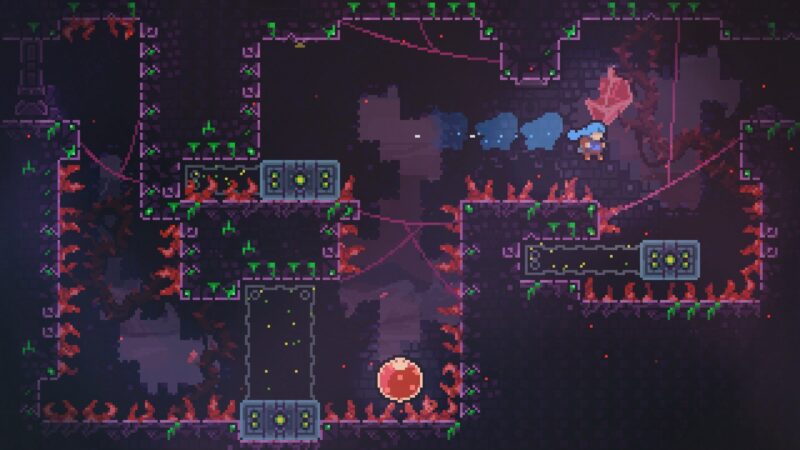 The complexity arises with how these simple controls combine with each other and interact with the environment. You can hold the jump button to jump higher. You can move while in the air. You can combine a jump and a dash to reach farther. Primarily, though, there’s the dozens of objects that appear in Celeste that make it interesting. Aside from the regular cast of spikes and bottomless pits, there are conveyor-belt platforms, crystals that refill your dash, falling platforms, bubbles, clouds, purple orbs, springs, and more.

Each of Celeste’s nine chapters have their own look and feel. They’re all set in different locations, each with unique art. Each chapter has mechanics that are unique to that chapter, which adds variety to the game. More than that, there’s also an ineffable way that the rooms themselves are designed that make things feel different: some rooms feel maze-like and suffocating, others feel light and airy, and Celeste conveys this through level design, not just new objects or different art. 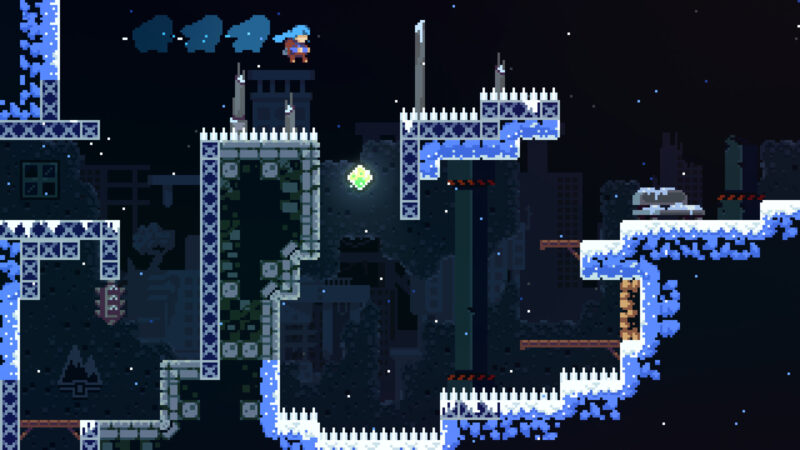 The game’s incredibly fluid. I’m not sure I can easily articulate as to why it feels like this. But it does. Movement feels smooth, responsive, even natural after a point. There are no long loading screens. Madeline respawns almost immediately after death, making it forgiving rather than penalizing. No lives, no restarting at the beginning of the level, no game over.

Celeste is hard, but never unfair. Challenging, but forgiving. Some rooms are puzzly, other rooms are rhythmic. And this was part of the reason I was put off from Celeste for a while: it just seemed too hard for me. But the developers have put Assist Mode, which allows you to tweak some of the game’s mechanics to make certain rooms easier. 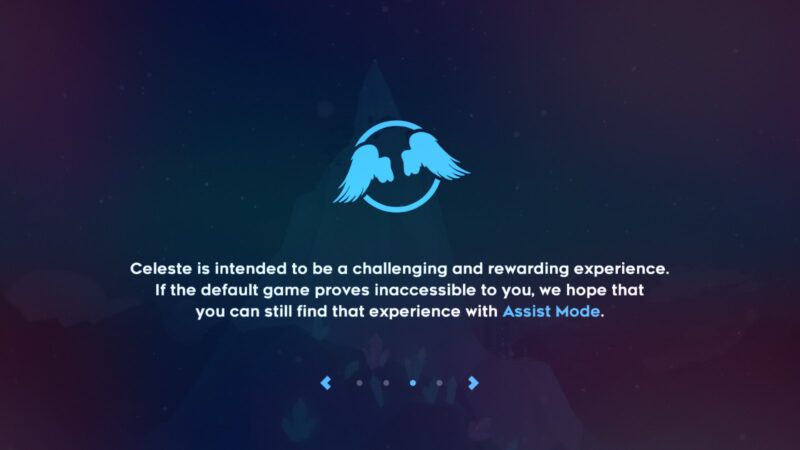 The game doesn’t shame you or make you feel bad for using Assist Mode. It doesn’t drop mechanics or skip bosses or whatever. You can turn it on and off when you need to. I used it for two of the rooms in the game that I found too difficult, and turned it off for the rest of the main story. I didn’t feel like I was doing something wrong, and no one told me I was doing something wrong when I used it for those two rooms I found too hard. Celeste allows you to play at a pace that’s good for you—whether it’s experiencing the hardcore platforming or enjoying the art, music, and story.

Speaking of art, Celeste’s art is pretty and charming. There’s a beautiful attention to detail, with how Madeline’s hair changes color, how wind blows her hair, how she sweats when she’s using up stamina. The pixel art is juxtaposed with a more full art style that appears in dialogue and the end of chapters, and rather than being discordant, it just works. 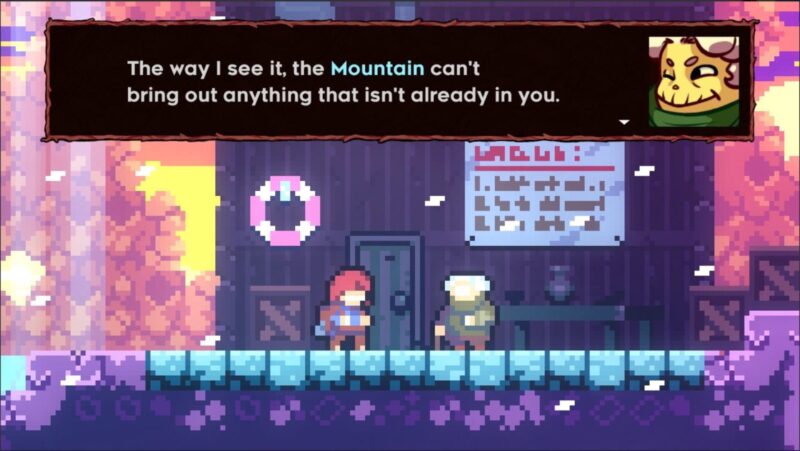 And how can you talk about Celeste without talking about its music? The soundtrack is beautiful, hands-down the best soundtrack I’ve ever heard in a video game, with apologies to Undertale and Ace Attorney. Take this track, for example. It starts off with a pretty simple riff, a variation on Madeline’s motif. The rest of the track just plays with this riff in different ways, making them feel different yet still cohesive. Each of the parts of the track corresponds with a change in the story, so the music increases and decreases in intensity in response to what’s happening in the game.

It’s genius musical design. And you get this attention to the music everywhere. Like all good video game music, it sets up the right amount of tension to help concentrate, but it’s never too flashy to be distracting. (That’s why it’s great background music for working.) It’s so catchy that I listen to the soundtrack on its own, and even if you don’t end up playing the game, I’m still giving a strong recommendation to listen to the soundtrack.

Celeste tackles the difficult topic of mental illness. Early on in the game, Madeline shares that the reason she’s scaling the mountain is partly to confront her anxiety and depression. The way the game so candidly talks about mental health and related topics feels encouraging. I could relate, deeply, with the conversations Madeline has about her feelings. And the game’s ending doesn’t feel like a platitude, nor is it cheap or forced.

Alright. I want to talk more about the story, so I’ll talk about some spoilers after this picture. Spoilers will stop after the next picture. 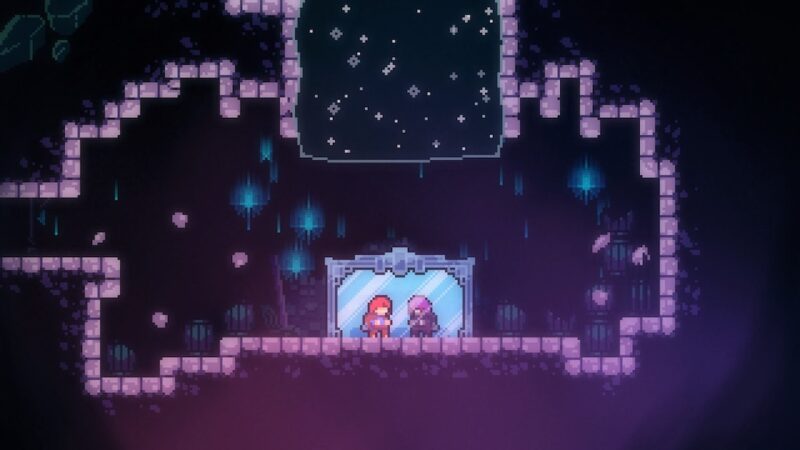 One of the things that hit me really hard is when Madeline gets asked why she’s climbing the mountain. And she responds:

You’re right, I don’t even know why. I just had to get out of my head. I’m stuck in a cycle. […] I’m going crazy. I can’t stop thinking about dumb crap that doesn’t matter. My brain fixates on these stupid things that happened forever ago. I should be over them. None of it even matters. I’m good at keeping up appearances, but the truth is I’m barely holding it together.

And like, wow. That’s such a mood. I’ve talked before about barely holding myself together and keeping up appearances, and I think it’s comforting to know that these experiences are universal in some sense. Seeing a part of myself being represented in media is always nice.

And speaking of parts of myself, one of the main characters in the game is referred to by Madeline as Part of Me. Part of Madeline looks like a goth version of Madeline, who acts as a somewhat antagonist in the first half of the game, preventing her from climbing up the mountain. When Madeline says that it’s literally her own self preventing her from climbing Celeste Mountain, I felt that—it’s such a strange feeling to have your biggest obstacle be yourself, of all things.

And what does Madeline think? Well, how else are you supposed to feel when this dark doppelganger of yourself is shooting lasers at you, preventing you from getting something you want? You blame yourself.

It’s like… I’m at the bottom of the ocean. I can’t see anything in any direction. It’s claustrophobic, yet I feel exposed… I remember feeling normal. But now it just feels out of reach, no matter what I try. Then again, I was probably always messed up. It just took something hurtful to bring it out. There must be something wrong with me.

That’s how I felt. That there’s just something wrong with me. That I’m just going to be messed up, forever. That I’m an inherently Bad Person for feeling like this, and it’s no one else’s fault but myself. And yes, it’s one thing to get it out with my own words, but it’s another thing to see someone else say it too. Celeste paints a relatable picture of depression, and the way the game presents it as part of the story is moving, and if the only thing I got out of the game was this, then it still would’ve been worth playing. 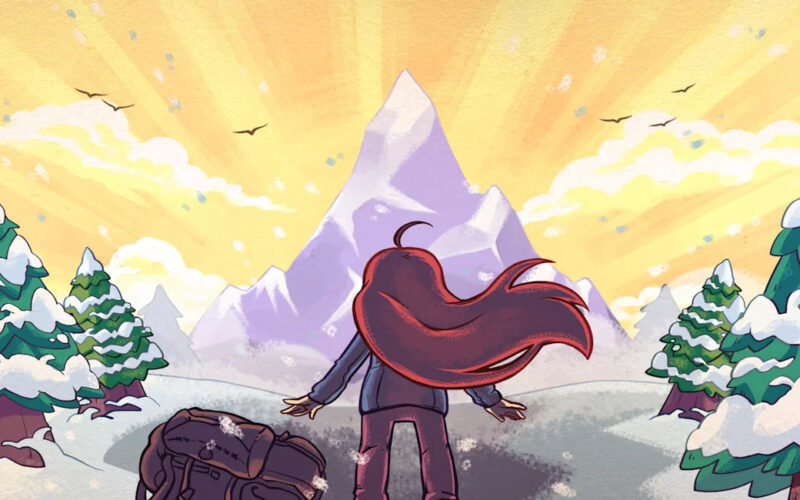 The main story took me around fourteen hours to finish. But then there were things to do other than the main story, like collect all of the red berries, and do the chapters after the epilogue. I ended up spending around another dozen hours on post-story content. Even after that, Celeste still maintains its appeal. Now I get to talk to people about the game, which is pretty nice, because a surprising number of my friends have played it.

Celeste is also made with speedrunning in mind. The options has a switch called speedrun timer, and there’s lots of tiny tricks that speedrunners can do, more of which are still being discovered, even if the game came out two years ago! I’ve gotten to watch some speedruns of the game, which are amazing, and they kinda inspire me to try speedrunning myself? We’ll see if I actually try that.