Cellular neurobiology by Mollie B. '06

The more syllables it has, the cooler it is

This morning I went in early to image neurons on the confocal microscope again, and I was going to take pictures of the lab and our equipment for you guys — I wanted to take them when I was in early, so I wouldn’t have to explain to all the postdocs what a “blog” is — but I forgot the camera. Hey, I’m not a morning person, and I can’t remember to do everything when I leave my nice dark cozy apartment at 6:45 AM. At least I did remember to leave Adam a shopping list, so he could go to the store on his lunch hour and get me ingredients for cookies and pie!

So I guess instead, I’ll talk about what my lab studies generally, and hope you don’t notice that there aren’t any shiny jpegs to go along with my talk.

I’ve been working in Morgan’s lab for the last three years, which makes me one of the more senior lab members. Morgan’s lab is primarily concerned with studying the proteins which make up neuronal structures called dendritic spines.

As someone may or may not have ever told you (I know they didn’t teach me anything about neurobiology in my high school bio class… but maybe things have gotten better over the last five years), neurons talk to one another via chemical signals. One neuron gets excited, and sends an electrical signal to its end which causes little packets of neurotransmitter to be released. The packets of neurotransmitter travel across the synaptic cleft and bind to receptors on the outside of the postsynaptic neuron. Different neurotransmitters bind to different receptors, so at this point everything gets really complicated. But something that’s relatively universal is that the receptors are anchored to other proteins, which form a scaffold for the receptors and their associated factors. These scaffolds are located in the spines, and form a line visible on an electron microscope. This is called the postsynaptic density, or PSD. The spines are the hotspots of activity in the postsynaptic neuron; there aren’t many/any receptors or scaffolds outside spines. Ohmigod, I did not make this figure in Paint. How rude of you to suggest that I did. 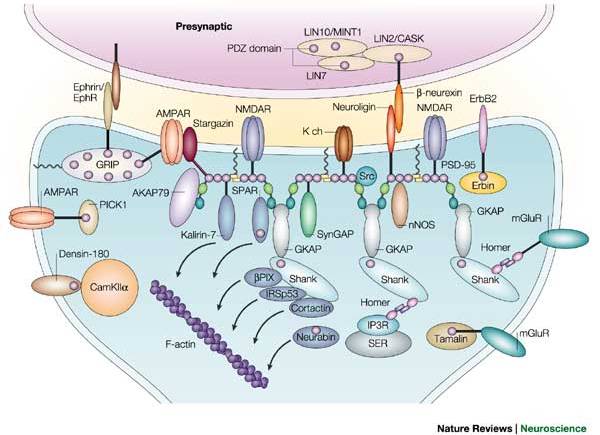 This is from a paper of Morgan’s from 2004. As you can see, lots of proteins in spines are binding to each other, and some proteins act as master scaffolds binding many different types of proteins together. These master scaffolds seem to act as liasons to the actin cytoskeleton. This is important, because reshaping of the spines via the cytoskeleton can be shown to have effects on memory-like states. Relatedly, patients with fragile X (a prominent symptom of which is mental retardation) can be shown to have long, skinny spines; most spines in adult neurons are relatively short and have “mushroom” heads.

If you look back at my neuron pictures from last week, you’ll see that the body of the neuron is yellow (red + green = yellow), but there are lots of little green speckly dots all over the dendrites. (Aside: “Dendrite” comes from the Greek for “tree”. If you look at a live neuron in 3-D, you’ll see that the dendrites do look quite a bit like tree branches.) The reason there are speckly dots is that my protein, which is stained in green, localizes very strongly to the spines.

So that’s what we do!

Mainly, I was wondering how much social responsibility do you think scientists have and whether that is enough… many labs seem to focus on issues which are interesting to scientists but will have no effect whatsoever to the outside world.

I have mixed feelings about this personally. As I look through labs in which I could do my thesis, I’m drawn to labs studying medically applicable problems — blame Professor James and 21A.216 (Dilemmas in Biomedical Ethics), but I would love to do something to help cure diseases, particularly the really devastating stuff like tuberculosis and AIDS. But my personal interests aren’t necessarily in those areas, and I’m certainly no microbiologist.

I’m reassuring myself for the moment that even areas that don’t seem to be relevant to disease can be just a few fortuitous discoveries away from a new therapy. As long as it’s related to the workings of biological organisms, it is potentially medically applicable. You just have to think a little harder. ;)

I’m really interested in neurons, and I was wondering if you’ve heard of the theory that neuron density is associated with intelligence or comprehension.
Is it true that the activity of a neuron is proportional to the length of its dendritic tree?

I would say that more accurately, neurons more densely packed with spines will tend to be more active. In a hand-waving way, spine density and spine number are related to intelligence (see again the fragile X example above), but with the strong disclaimer that most studies of this sort are looking at changes in the electrical properties of one type of neuron — my lab uses rat hippocampal neurons — in a dish in culture, while there are many different types of neurons in your head cross-talking in ways we can’t even begin to comprehend right now. Understanding intelligence in a cellular way is far away.

I was wondering, after you get your bachelor’s degree, are you required to get you master’s and then your PhD, or can you start working on your PhD right after getting you bachelor’s?

im really interested in being a cheerleader this fall but i dont have any experience :( what should i do to prepare for the tryouts in the fall?

First and foremost, DO NOT WORRY. We only call them “tryouts” so people will understand what we’re talking about — as long as I’ve been on the squad, we’ve never cut anyone who was interested in joining. Tryouts are really more for you to try out the squad and see if you would enjoy being a cheerleader. Historically, about half the people on the squad did not cheer in high school — certainly I didn’t, and I was even captain of the squad my junior year.