Shout out to the MIT VPN for helping me climb the Great Firewall. Facebook and google are banned, but for some reason Facebook Messenger still kind of works on my phone, and since I have the VPN I can access everything on my laptop (thank goodness, because my life depends on Google products).

We (my mom and I) arrived in Shanghai last night. Today (June 3rd) was MIT’s graduation and I was looking at all the pictures on Facebook from a thousand miles away. Being so far away makes me feel a little better about being reminded about the inevitable fate of Graduating, a both enticing and frightening prospect.

I had my doubts about doing so much this summer–researching at the Media Lab and going to Ethiopia for the water project is already a lot of stuff, so I wasn’t sure if I made the right choice in going back to China. But I felt a pang of both regret and longing this year, one that I wrote about it in the “我没去过北京/I Have Never Been to Beijing” post, because I realized that I hadn’t been to China in six years. And after just one day, I’m so glad I decided to return.

This past school year, I intentionally scoured my email for internship and research opportunities in China, especially in Jiangsu Province and surrounding areas since that’s near my family. I was accepted into a program at Zhejiang University, an 8-day research and cultural exchange session. I’m not doing anything particularly related to my major–in fact, my proposal for a mini-project was to analyze art and popular culture in China, since more and more people are interested in increasing China’s soft power influence, or comparing it with other Asian countries such as Korea and Japan. I took 21G.092 this past semester, a fascinating class called Modern Chinese Fiction and Cinema, which inspired me to propose the project.

I’m spending a week before the program begins just visiting family and wandering around. Six years ago, I couldn’t speak much Mandarin, and now I’m much more fluent. Six years ago, I also couldn’t speak much Amharic or Kafa No’no. I learned three languages in about 4 years, and improved them over the last two. Granted, these were languages I had a little practice in when I was a small child, and also heard all the time from my parents, but still, learning was hard, especially reading and writing, which I’m still far from perfect or close to my speaking ability in. But I took Chinese for four years in high school (plus speaking at home with my mom/listening to her nag help me to correct my pronunciation) and I’m minoring in Chinese at MIT. Other than English, Chinese is my most fluent language.

It’s exciting to return to China now able to hold full and complicated conversations about lots of different topics. I feel, just as I did after going to Ethiopia in January, much more able to handle myself in Shanghai, to get around and navigate on my own and just feel…well, at home. It’s a good feeling. I have put a lot of effort into being in touch with all of my cultures. It took, and continues to take, a lot of time and energy–I may have been born with these cultures, but maintaining that connection requires energy.

We are staying in Shanghai, in Chang Ning Qu (长宁区). 长宁区 is a district where a lot of foreigners live–Shanghai in general has a lot of foreigners (it’s only about 1-2%, but that’s already 1.4-2.8 million), 70% of which are in China to do business, not as tourists. This means not a lot of people stare at me, but then, I also look more like my mother. In Ethiopia, people are more likely to ask me if I am Asian than if I’m American. Today, I went to Yu Yuan（豫园）to walk around with my mom. It’s a rather tourist-y attraction, but pretty, nonetheless. 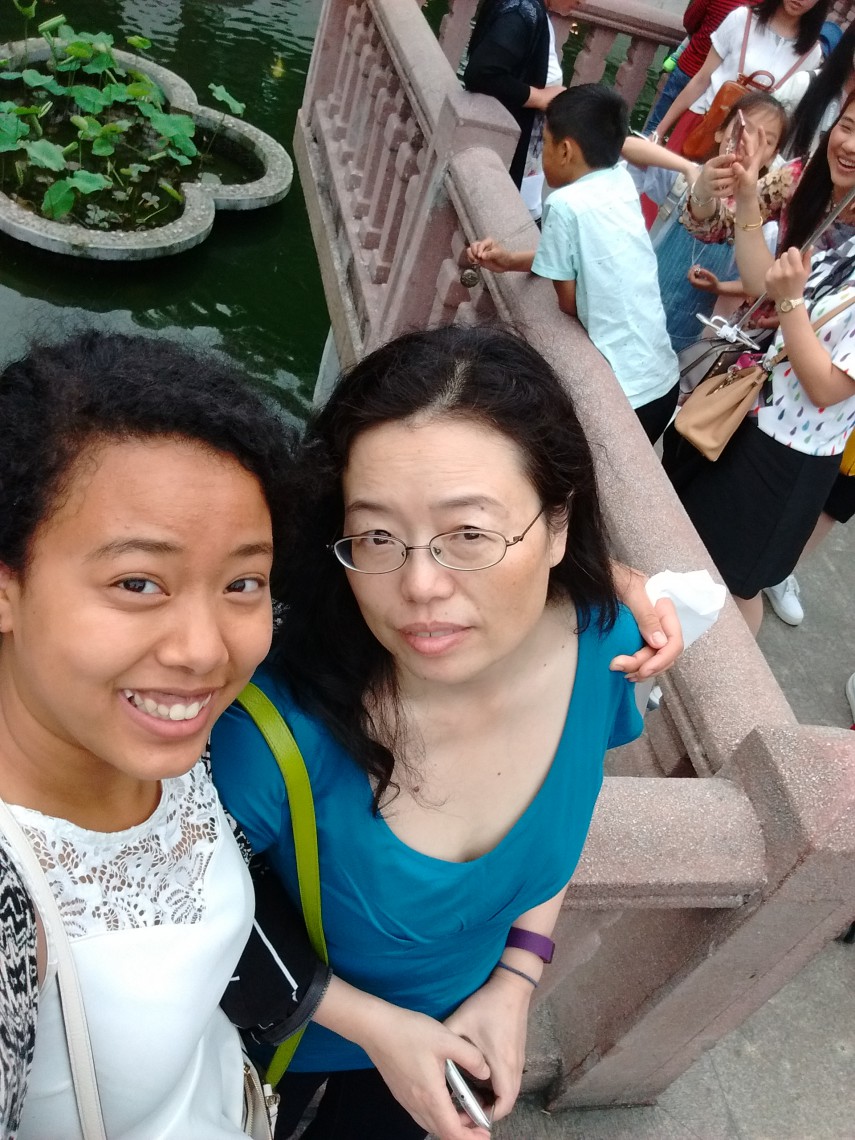 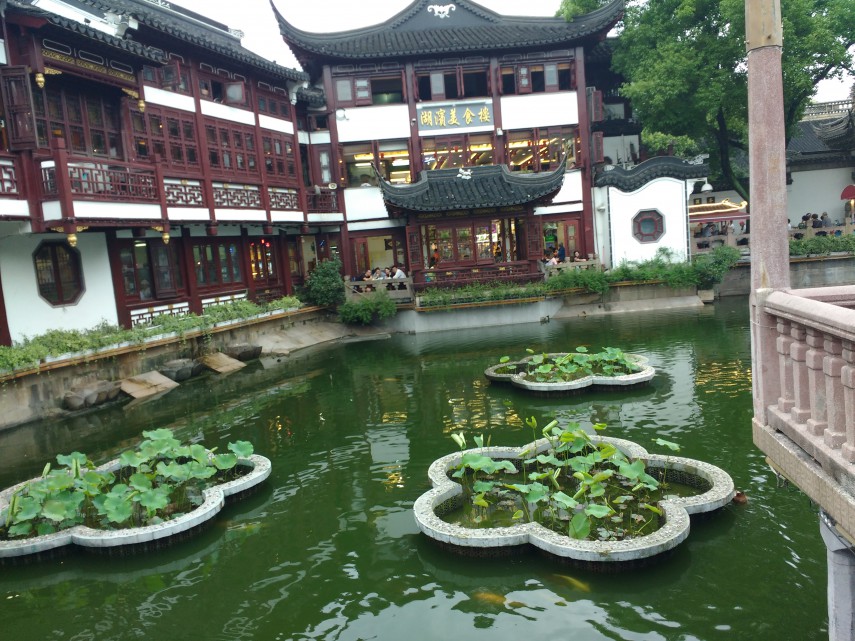 A koi pond in Yu Yuan.

豫园is a kind of marketplace, with a lot of old-style buildings. Sometimes in the background you can see the skyscrapers of modern-day Shanghai, and it makes for quite an interesting contrast. 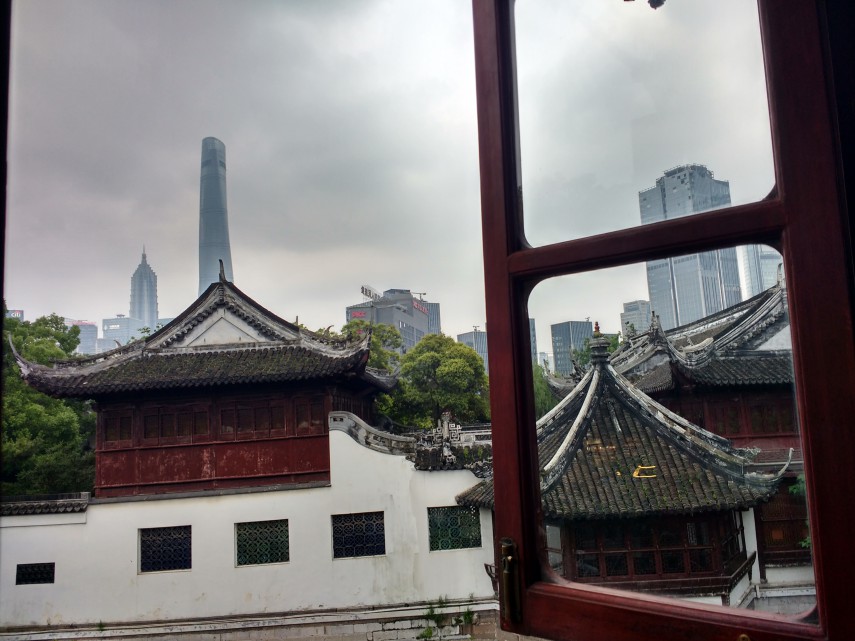 On the way back, my mom went to go meet up with a high school classmate of hers, so I took the subway back to our family friend’s home by myself. A subway is a subway, the hardest part (for me) is simply just reading the signs, which of course, are in Chinese. But once I’ve done a particular route once or twice, it’s fine. It’s easy. But on subways, as I also said in the “我没去过北京/I Have Never Been to Beijing” post, people always stare at you if you look a little out of place.

My mom said, “why are you worrying about these things? Just enjoy yourself;” but, of course I think about these things. It’s different when I’m truly in a country or community I have no connection with–I don’t have any problems with people staring at me because I’m truly a foreigner. But in Shanghai or Addis, and especially Nanjing or Kafa, I don’t think of myself as truly a foreigner. For one thing, I’ve been to those places so many times, and stayed there a good amount of time. For another, they are part of my cultural identity, And third, in the United States I’ve also always felt kind of foreign–especially before I went to college, actually. The diverse environment of MIT helps a lot. But when you are considered foreign everywhere, it can be a little depressing–like you don’t really have a particular country that you belong to, a particular home.

Modern-day Shanghai is very different from the Shanghai of even just six years ago, the last time I went. The staring was pretty pronounced then, particularly at my brother, who has more of my father’s features. Now it’s just a curious glance or two. There are a lot more non-Chinese people in Shanghai, the same way that there are a lot more Chinese people in Addis Ababa. And so, it seems, the world is becoming more globalized and cosmopolitan, and more people are mixing. I like to console myself with the idea that I’m inherently at the frontier of this new generation of people, who consider themselves global citizens rather than belonging to any particular place. They are mixed people, like me, or immigrants, or people born in one country and educated in another, or interracial/international couples, or people who spend half a year in one country and another half in another. Children of parents who travel for work, who went to international schools in whatever countries they had to go. There are many of these kinds of people at MIT, and I meet more and more of them every trip around the globe that I take. (This article on the subject of global citizens is pretty cool)

Between bouts of identity crisis and deep reflection like that above, I soaked in Shanghai and its unique culture, which I remember well. I also ate a lot of food, of course. 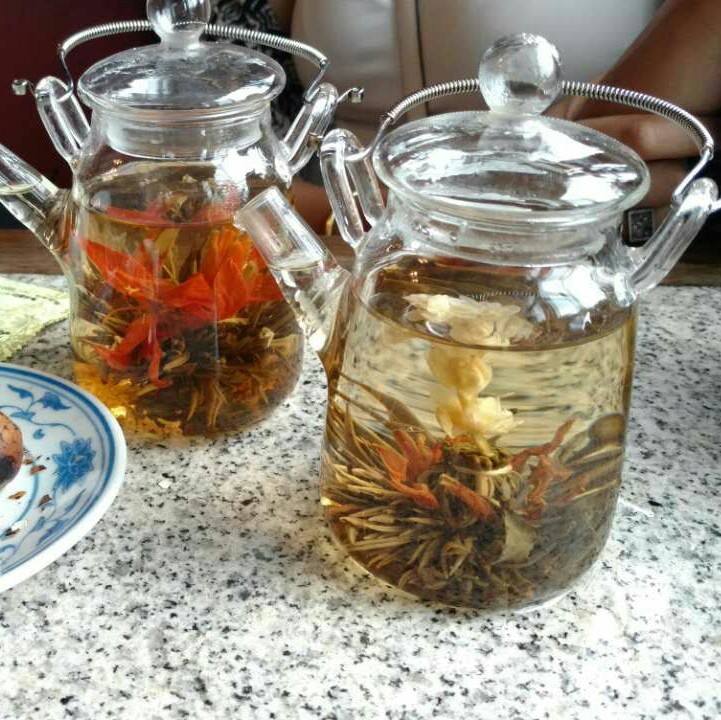 Doing stuff by myself (like taking the subway) makes me feel that I could live here—indeed, I plan on it. I want to live in both my parents’ countries for at least a couple years at some point in time. Shanghai is a lot cleaner and more pristine than it was before, and my Chinese is a lot better than before. You should travel—what you find is that the country where you grew up (in my case, the United States) isn’t necessarily the best at everything, though perhaps it’s a very American sentiment to think the United States is the best at anything in the first place. Regardless, some basic things, like transportation infrastructure and investment in bringing cutting-edge technology to the public, are much, much better in China, and many industrialized East Asian nations. An example that incorporates both of those things is the magnetic levitation train in Shanghai, a high-speed rail that is made a lot faster by levitating the train on a magnetic track—dramatically reducing friction. The United States doesn’t even have a “regular” high speed rail or bullet train, which makes it difficult to travel cross-country without flying or driving. We’re heavily dependent on cars. I thought Boston’s public transit system was pretty decent compared to Denver’s, since the T trains come so frequently. My friend Isabella K. ’18, from Seoul, South Korea, on the other hand, thinks it’s the worst transit system she’s ever had to use. In Seoul, she told me, the trains are high-speed and automated (there’s no human driver), so they run 24/7. There’s a section at the front that’s all glass, so you can stand there and look at everything you pass by. And you can get to downtown Seoul faster and more conveniently on the train than by driving, if you’re far enough away.

What I’m most looking forward to on this trip is visiting my uncle (my mom’s cousin) at his organic rice farm in the countryside. My mom grew up in Nanjing and our relatives are mostly in Shanghai, so I’ve never been to the countryside in China, and I want to see it. I’ve only really ever seen the countryside of Ethiopia, at our family village in Kafa.

I’m finishing up writing this post at 5:30AM, Shanghai time. Today is going to be hotter than yesterday, and I’m going to meet up with a family friend. I will likely receive a few more curious glances, but I won’t mind so much today. In a week, I’ll head to Zhejiang University, where I’ll really be on my own, but also, probably treated more as a foreigner and as an American. It’s always a struggle to reconcile these things, and to continually explain myself to people. But growing up this way has had its benefits, too. I’m glad I have been so fortunate, with three countries instead of just one, with four languages, many cultures and sub-cultures. And an appreciation that everyone is both different and the same—many unique variations in the folds of the cloth of humanity.