The path to self-discovery is lined with my blog entries.

One year ago, in the mush of schoolless boredom known as Spring Break of junior year, I got into MIT. “Got into” is here used idiomatically in the superficial sense, bearing no deeper significance than that I could take a plane to 77 Massachusetts Avenue in August and call myself a student if I wanted to. (I am, of course, blatantly ignoring the huge mass of angst and pain known as Paying Tuition). My situation was thus: One year of high school stood between myself and a diploma. I wasn’t accepted to any other colleges, probably because I hadn’t applied to any other colleges. After about 5 picoseconds of staring at my acceptance letter from MIT, I became exceedingly convinced that graduating high school was just a formality, a trivial remnant of the antiquated American Dream that dominated social aspirations in the postwar decades of the previous century*. Plus, “high-school dropout” had a nice ring to it (and I would get loads of street cred too!).

*By the way, I copied and pasted part of this sentence out of a book report that I wrote about Death of a Salesman in 10th grade.

So I decided to cross “Finish high school” off my to-do list. Before taking a second look at the campus, before getting my financial aid package, before understanding the course requirements, before learning that the elevators in the Stata Center are only semi-functional, before hearing of Random Hall, even before talking to Donald Guy ’12 (who, in all likelihood, helped convinced about 15% of our class to matriculate by various means of the Internet), I accepted my offer of admission. You already know the rest of this story, and some of you who are reading this will live it for yourselves in the next six months. I can hardly wait.

The punchline is that to call myself gratuitously lucky would be understating the absurdity of my uninformed, mostly blind, yet tremendously unregrettable decision. Every day, I wake up. To be more specific, every day I wake up and marvel at the sheer impossibility that I picked the right college without seriously looking at more than one college. Then I go back to sleep, because I probably went to bed at 3 AM the night before and can’t believe that I just wasted 30 seconds thinking about how great my life was when I could have been sleeping.

So, whether or not you’re considering MIT (if not, you might be on the wrong website), here’s my advice: Look both ways before you cross the street from high school into The Vast Unknown. Forget the brand-name universities and try to imagine where you’ll be happiest. Talk to actual students. Probe their insights of their learning environment. Ask them to share with you the aspects of college life that matter most to them (you might get a surprise). Ask them about their most shocking self-discoveries, their failures, their moments of unbearable misery and unforgettable joy. Ask yourself whether you want to live through the same experiences.

This past semester, I’ve finally started to understand MIT as an institute built on cooperative, immersive learning. Meaning that the curriculum is structured around a level of difficulty that requires you to reach out and work with your classmates, to stay up until the early hours of the morning discussing problem sets, correcting each other, plowing yourselves into deeper, subtler levels of comprehension that you certainly didn’t see during lecture. The end effect is that the line between your classes and life beyond classes becomes progressively blurrier until you’re instinctively radiating and absorbing information from those around you during all waking hours. This is unbelievably uplifting to your ability to make interesting dinner conversation at family gatherings.

Snapshot: Last night, on the inaugural evening of Spring Break, I forgot to come home after lab. I walked upstairs to Lulu‘s office hours, arbitrarily, because I remembered That One Blog Post where she wrote about how nobody went to her office hours and how she sat around and ate a sandwich instead. We worked through half a problem, maybe, and spent a nebulously indefinite haze of time sitting there, in an empty office, in a deserted hallway, right above MIT’s famously (un)Infinite Corridor, chatting loosely about physics. Lately, I’ve been realizing that trying to grasp threads of understanding from the fabric of the universe is like pretending to be a salmon. You swim upstream, bluntly against the direction in which the water (the physical metaphor for your intuition) pushes you, but you struggle harder than the actual salmon because you have no instinctive knowledge of how to subvert the current. You are disoriented, weightless and uprooted, despite the fact that you have read books and articles by talented salmon like Stephen Hawking and Alan Guth.

Anyway, it was 9 pm after a while. Weird how that happens.

On a tangential note, I recently discovered with much confusion and psychological turmoil that I prefer college-ruled paper to wide-ruled. Walking into Walgreen’s on an innocent sunny afternoon and feeling compulsively drawn toward what I previously considered a waste of trees, I was overcome with self-denial and forced myself to pick up a stack of wide-ruled instead. Halfway to the cash register, I couldn’t bear it any longer and threw the wide-ruled paper into the candy aisle with much angst and internal dissonance. Mournfully, I lost the identity that I built for myself on the day in 4th grade when I decided that college ruled paper was for uncool kids who didn’t own any good Pokemon cards.

Perhaps it’s a good thing. Edward ’12 recently borrowed my E&M lecture notes, freshly scripted on college-ruled paper, and told me that they were neat. This has never happened to me before in real life. It may have happened once during a particularly boring dream, but I can’t remember.

Anyway, the Blog Police are telling me that I should quit trying to become a guest speaker on Oprah and post a picture already.

Lobby 10 at noon, bird’s-eye view from the 2nd floor. If you show up early to lecture in room 10-250, you can lean against the railing and think about how this is one of the few spots along the Infinite Corridor where your cell phone gets a signal. (T-Mobile users, I’m writing this for you.) 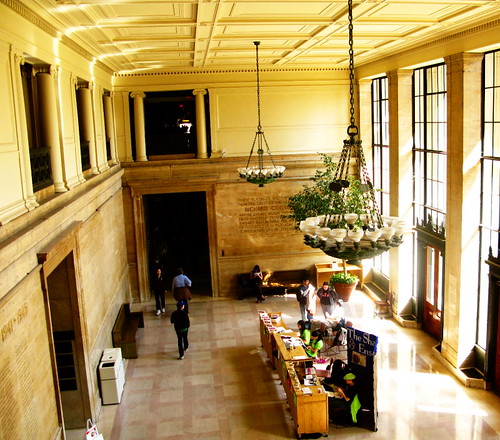 There’s something distinctly fractal-like about the architecture of Lobby 10. Douglas Hofstadter, if you’re reading this blog, I give you full rights to use this picture in your next book. 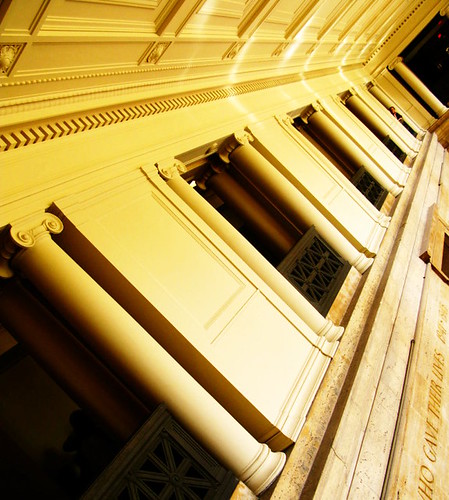 I call this one “Vertigo,” or “Experimental Byproducts of Camera Rotation.” 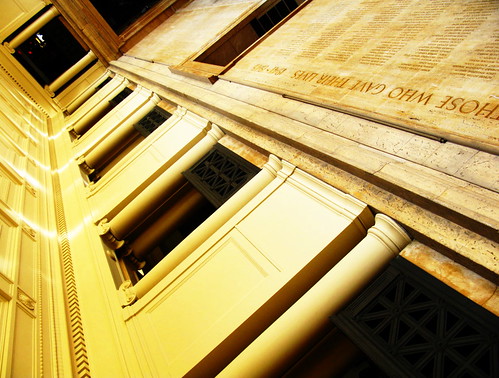 I encourage you to go forth and reevaluate your life now.