Being a college student in a dorm means finally having to decide how and what you want to eat for the next 4+ years. For some, it’s as simple as picking which dining hall you want to go to. For others, it’s a confusing mess of “Where do I start? How do I start? When will I have time to start?” I’ve been through it. It doesn’t have to be a hair pulling mess, because in the end, food is great. I like food, you like food. So let’s get this show on the road.*

A Couple of Doors Down (cooking is fun, too)

Taking charge in the kitchen isn’t quite as hard as it looks. While it may be easy to fall back on the sweet embrace of instant ramen, easy mac, and frozen dinners, cooking is the kind of skill you’ll be glad you learned in college. After that, in twenty years, it’ll be hard to explain to your doctor why you solely eat food that comes from a box. Plus, when you’re not on a meal plan, it becomes your cheapest option. So now, you’re probably thinking, “Cooking? I’ve never cooked a day in my life! I could burn the kitchen down pouring a bowl of cereal if I tried!” or something along those lines. Trust me, I’ve heard it all. But never fear, no one is a lost cause when hunger hits. So now, you ask, “what’s your secret, Sabrina?”

I’m here to tell you my secret; it’s cooking videos. First, let’s start with some classics. The Food Network, or more importantly, Netflix, has a huge variety of cooking shows that are informational and entertaining. Some of my personal favorites are Cutthroat Kitchen, MasterChef, and Chopped. The overall formula for most of these shows is simple: you take some n number of chefs, some n-1 number of rounds, and a specific thing to cook or cook with, plus or minus some unique spins. While you may not be following a recipe by the book while a chef scrambles to finish it on the screen, you can definitely pick up a bunch of cooking skills from watching. For example, do you know how to make a roux? Or properly dice an onion? Or what flavor profile works well with pineapples? I definitely do, and it’s thanks to shows like this. Plus, they’re funny! On Saturday mornings last year, I’d sit down and marathon episodes of Cutthroat Kitchen with some of my hall mates, and we’d laugh about cooking blunders and comment on weird food combinations. Overall, fun times all around. Here’s a pretty cute clip of some Child-Chef-Prodigies testing their whipped creams successfully and not so successfully:

Okay, so maybe you don’t have time to watch hour-long episodes of cooking. That’s totally fine, and you’re in luck! In the past year or so, short cooking videos have made a huge rise on social media. If you follow the right pages on Facebook (given that you check Facebook semi regularly), you can get at least 1-3 short cooking videos a day. You can watch them on the way to class when you’re walking from Building 16 to Building 1, or before class when you get there three minutes early, or when you’re brushing your teeth. When life hands you 30 second cooking videos, you take advantage whenever you can.

These recipes are normally quick to make, and don’t require too many ingredients you wouldn’t already have. Here’s one recipe I tested with a friend and confirmed delicious:

We tried the Avocado Lime Salmon, and it only took ~30 minutes, I got to socialize with other people in the kitchen, and it tasted like I had just paid 15 bucks for it. Besides the notorious Tasty, there’s also Tastemade (and its regional varieties), Twisted, and TipHero.

Right Around the Corner (dining halls are non exclusive all inclusive)

If you’re one of the 50%+ of people who are on a meal plan at MIT, then this one is pretty much a given. You’ve probably got your routine by now, which dining halls are best and which are bust. But for those of you not on the meal plan, all hope is not lost. I was on the meal plan for about two weeks, which was enough to give me a vague idea of how it worked. For one, yes, you can still eat at them even when you’re not on the meal plan! Any student can go into any dining hall (given that it’s open) and pay with TechCash or regular cash, $8 for breakfast, $11 for lunch, and $14 for dinner. I found myself going to the dining halls semi frequently my first year at MIT, partly because I’d only have hour breaks between class, and partly because I wanted to hang out with my friends who were on the meal plan. Overall, it is a pretty solid option for food and socializing.

Up Your Alley (free food gold mine)

Legends speak of it in hushed whispers and hurried footsteps throughout halls and courtyards. It is a sport only known to those willing to put in work for it. It is the one and only, free food mailing list. This mailing list (f[email protected]), which anyone with a Kerberos can add themselves to, is where people will email out to when they have an event, and there’s leftover food that they just don’t want. This “food” can range from four boxes of pizza, to a tray of Chicken Tikka, to bottles of soda, to a bag of charcoal (yes, it has happened). Playing the free food game is really chancy. First of all, there are definitely fruitful periods (the immediate weeks after REX, the week of Career Fair, etc…) and dry periods (IAP, mid-semester, etc…). Second of all, there are some physical limitations to how fast a person can travel. Let’s phrase this like a PSET and try it out:

If Sabrina is in Building 66, and she receives an email at 2:34pm that was sent at 2:31pm that says there are two free boxes of Dunkin Donuts in Lobby 7, will she get any donuts? Keep in mind, foot traffic in Lobby 7 is at a moderately low F(x) in MIT Students, but at a constant rate C for tourists. Also, keep in mind, Sabrina can walk the distance of the Infinite Corridor in 7 minutes, and there are ~50 other people within the Infinite who have just received the same email, 3 minutes ago.

The answer’s pretty obvious here, right? No, Sabrina will definitely not make it in time to grab a donut. But, free food can sometimes be a gold mine. You can actually just get really lucky and be really close to free food. Or, you can learn to play the game right. There are usually free food “hotspots” where there are a lot of events with a lot of food: Lobby 10, the Stud, Kresge, Stata, and Sloan. I generally rule the first three out because they’re too far when I’m at Senior Haus, and unattainable when I’m in class.

There are even some times where you don’t have to work for free food. If you live in a dorm like Senior Haus or East Campus, occasionally friendly floormates or hausmates will triumphantly come back from their free food conquests and share with the people of their living group. In the Haus, food gets brought to our lovely front desk, where emails are promptly sent out and the madness begins. Overall, great (albeit, cold) options with minimal effort, except a bit of running.

On the Way to Class (more than just dining halls)

There are also a myriad of options for retail dining on MIT’s campus, for when you just don’t have time to cook, or can’t be bothered. There’s all the restaurants in the Student Center: LaVerde’s, Subway, Shinkansen Japan, Anna’s Taqueria, Café Spice, Shawarma Shack, Dunkin Donuts, and that one grill spot by the Dunkin. There’s the Steam Café on the fourth floor of Building 7, Café 4 in the Infinite, Forbes Café in Stata, and the Koch Café in the Koch Building. Because most of them are located near prime PSetting spots, they make quick, tasty grabs that you can eat while crunched for time and rushing to finish.

To summarize all the places and their perks:

All these options take TechCash, which is great if you forget your wallet while hurrying to class. My studio (4.022 – Architecture Design Foundations) met on the fourth floor of building 7, which is conveniently right next to the Steam Café, so I found myself frequenting that one most often before my 3-hour studios. Their soups are pretty top notch. And, like I mentioned before, Steam Café has the one of my favorite views on all of campus. 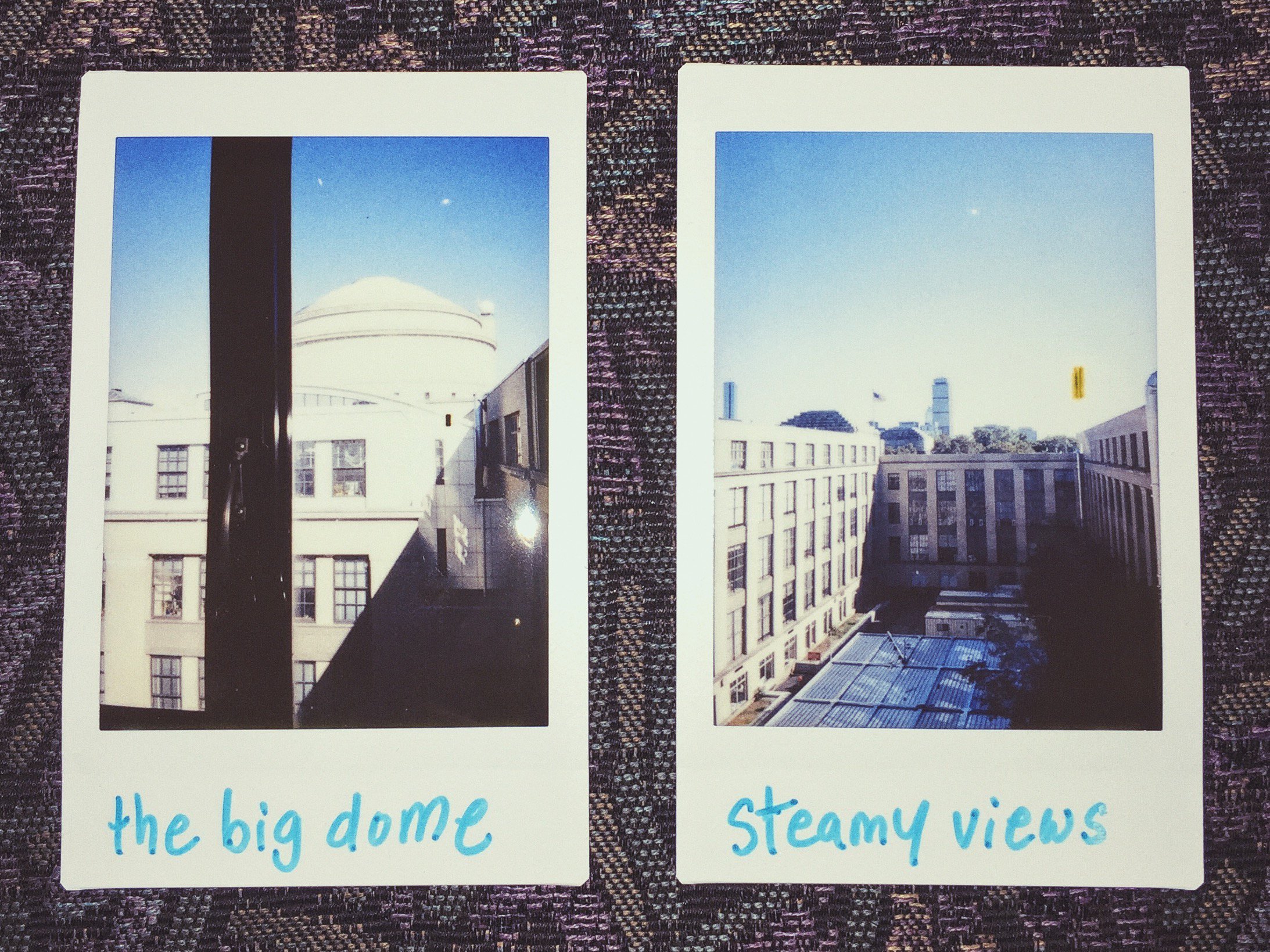 Just a Block Away (the kendall square meal plan)

After about a month at MIT, you’ll probably get sick of cycling through the same 6 or so food spots, and then you might think, “Oh no! Am I resigned to a semester of food misery?” or, “Oh no! I want to start eating healthy, and I can’t do that with a diet that’s 90% fried chicken!” Either way, there is a solution. As it turns out, we live around some great areas for convenient (and sometimes healthy!) food.

Kendall Square is, well, just a block away. Metaphorically speaking if you happen to live on Dorm Row, and literally if you live on the East Side. Besides the illustrious T-Stop, there are tons of fast casual restaurants for quick dine ‘n dashes (the legal form, of course). There are classics and food trucks and Boston Originals alike; Chipotle, Cosi, Clover, Jose’s, Panda Express, Einstein Bros… I could go on forever. I’ll break them down into a comprehensive list based on cravings.

Craving a lot of food?

Note: This definitely isn’t every single restaurant in Kendall Square, but rather the ones I’ve personally tried.

Making My Way Downtown (down the aisle marked “essentials”)

For a college student, supermarkets are like Toys R Us to 7 year olds. All the responsibility of being able to finally put that cake in the shopping cart, without your mom immediately taking it out. Because being an adult means being able to eat nothing but cake all day, and no one can tell you no. You definitely shouldn’t do that, but you could. Now, I could compile a list of the nearest supermarkets and what’s good for what and where what is, but someone has already done that!

So, you’ve read through that, but now what? Besides those things you just can’t not buy, like frozen Orange Chicken, there are some things that I would call “essentials” for surviving and thriving.

Everything the Light Touches is Our Kingdom (aka, boston is a big city with loads of options)

Fear not, it isn’t the end of our food journey yet. There is a whole new world outside of MIT where the food possibilities are endless. And much like x-squared, the limit doesn’t exist. Boston, Central Square, Harvard Square, Porter Square, Davis Square… you get the point. If you’re feeling up for some fancy food plans, there are restaurants on every corner, in every regional variety, in all sizes and shapes. I could name all of my favorites, but I also think the fun of this one is just going out and stumbling across a place that strikes your eye. Also, there are just way too many.

So go out there! There’s a whole world of food to explore.

Good luck, and happy fooding everyone!

*thanks to Dominik M. 19′ for coming up with this silly, youtube esque opening line