A photographic biography of a Friday

While cruising down Facebook Blvd. the other night, The Virtual Representation of Yan ran into The Virtual Representation of Katelyn ’12, who, incidentally, also happens to exist outside of cyberspace sometimes. Anyway, Katelyn slept for 2 hours and still had a headache at 10:54 pm, according to the unquestionable truths of Facebook status update. This was unacceptably tragic, especially at an institution where “sleep is like currency” (in the eternal words of Donald Guy ’12, who, unlike basically everyone else on MITblogs, appears to have been born with a last name). Sympathy flooded into my soul: ernestly did I remind Katelyn of our valuable Facebook friendship by reducing her life to a sinusoidal function.

Proof of Why Katelyn Has a Headache:
1. By Christian teaching, sloth is one of the seven cardinal sins.
2. Sleep is a member of the set . Therefore, sleep is a sin.
3. sleep(t) = sin(wt), where sleep is a function of time.
5. sin is a periodic function, so sleep is a periodic function also (as evidenced by the term, “sleep cycle”). Let the period T = 2 hours.
6. Sleep is directly related to health, so health(t) = ksin(wt)
7. Thus, after one period of 2h, health(t) returns to its initial value and Katelyn still has a headache.

Other news: I have at this point exhausted the bloggability of not being awake. The rest of this post will be about things I did yesterday in between (approximately) 284 naps.

10-11 AM was occupied by Eric Lander‘s last biology lecture of the semester. Only at MIT does one of the world’s most renowned researchers teach an introductory biology class while perched on a desk. (This is a brilliant lecture tactic, because sitting on a desk will make you appear far more approachable to students than the chair-sitters who teach at Harvard.) Professor Lander, I will fondly remember the desk in room 26-100 as well as the enormous intellect that sat on it. 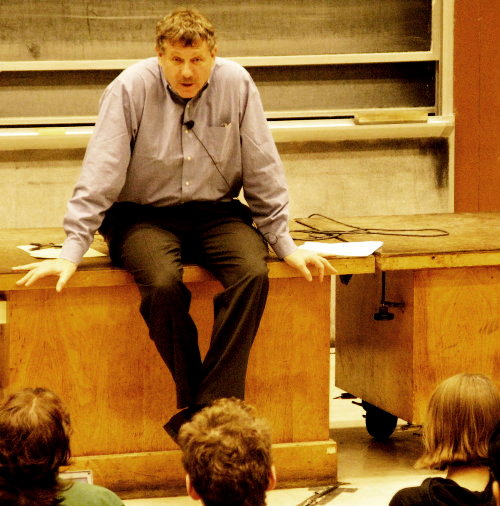 Next was 3.091: Introduction to Solid State Chemistry, whose lecturer is universally recognized for never sitting down, among other equally impressive achievements. 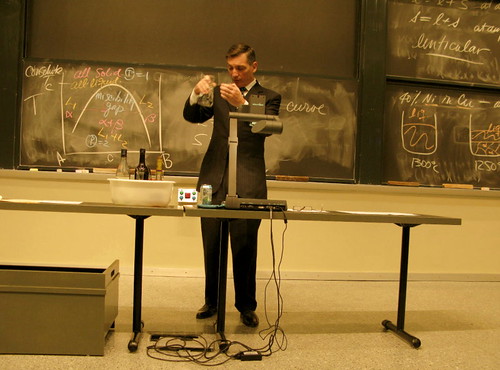 Quoth Bill Gates: “Everybody should watch chemistry lectures — they’re far better than you think. Don Sadoway, MIT — best chemistry lessons everywhere. Unbelievable.” I’m using Windows right now, so the spirit of Bill Gates compels me to link you to the 2004 Open CourseWare version of the same lecture that I witnessed on Friday:

In the profoundly eloquent phraseology of a YouTube commenter: “the proffesor is just excellent never understood phase diagrams so well.” I couldn’t agree more, my silver-tongued comrade.

Friday’s lecture featured nonzero quantities of alcohol for the sake of scientific education. 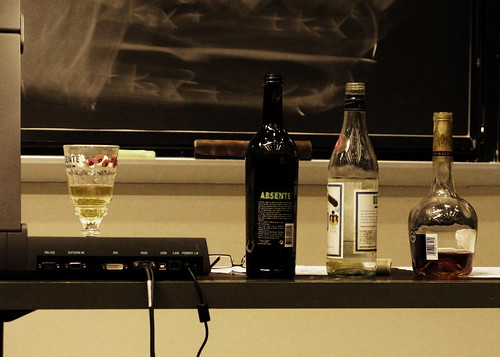 Because only at MIT is absinthe used to demonstrate the real-life relevance of binary phase diagrams. Look! It’s a clear liquid! 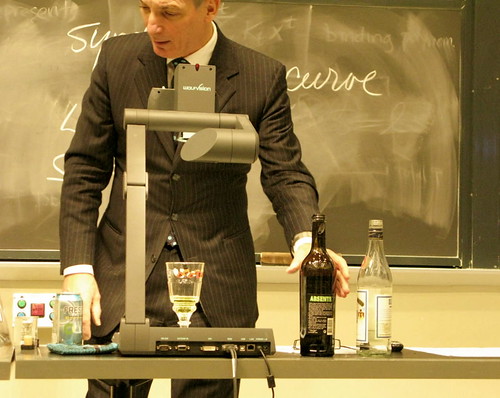 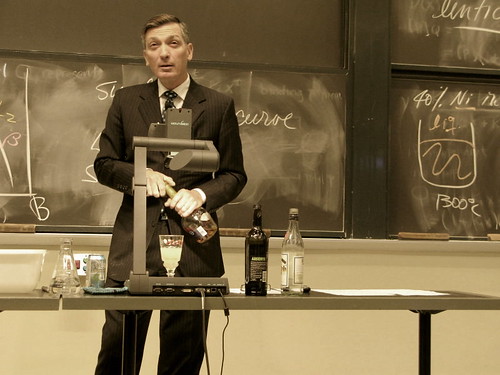 (Trivial trivia: Various informants have told me that the back of my head appears in all of the videotaped 2008 3.091 lectures since, like, the beginning of October. Some people just get all the fame.)

Later that afternoon, I continued to establish myself as a black hole of fame, from which limelight cannot escape. My name! On a chalkboard! In front of an almost-full Linguistics recitation class! At last, I have conquered my life’s goal: to be used as an example for proper research paper citation format. 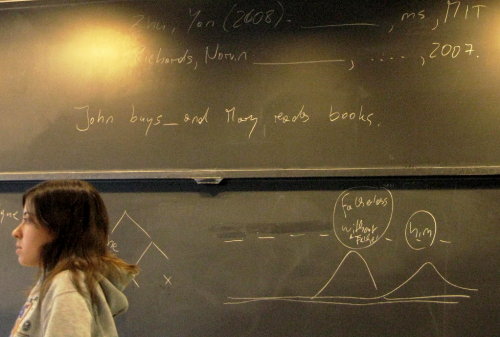 Also, our recitation leader baked us coconut and chocolate chip cookies. In a gloriously confusing moment, he passed around a Tupperware full of cookies and said “Today, I want to show you guys what I’ve been working on lately,” to which I thought, “Cookies??!!” It turns out that he was referring to his project in pronoun reference semantics, not pastry-making. 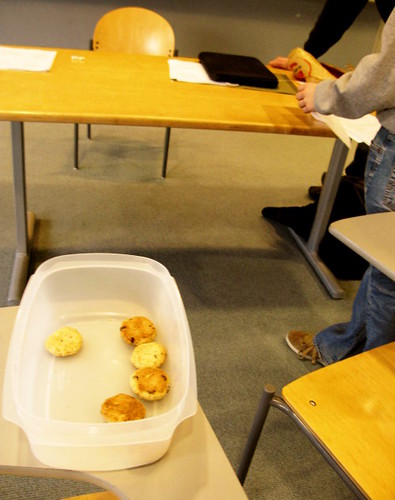 On my way back to Random after class, I took a picture for the Internet. What else is new? Feast your eyes on one of the bazillion attention-frazzling bulletin boards wrapping the inside of the Infinite corridor like cheap Christmas gift wrap. I mean, economical gift wrap. 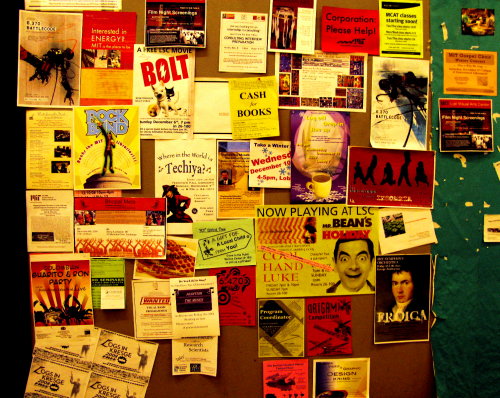 (Bonus challenge: In the photo above, find Beethoven, a Course 6 class, free waffles, an MIT choir group, and one movie whose existence cannot be justified.)

A shade further along the corridor, velvety echoes of thick polyphony greeted the ear like a friendly Walmart employee. Except, MIT’s choirs are far more resonant and in-tune than any Walmart greeter that I have ever encountered, even in Texas. 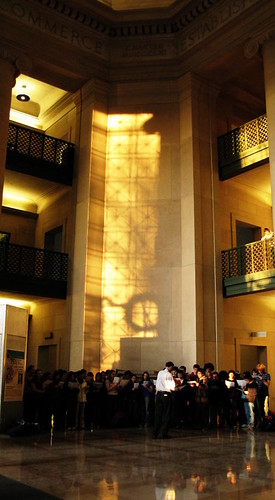 (Note the shadow of a wreath on the wall, a cherry plopped on Lobby 7’s holiday-themed sundae.)

The production of the photograph above made me miss the Walk signal on the crosswalk outside, so I ended up looking at the sunset for about 15 seconds more than I would otherwise. Life was short. Sunlight looks nice. Photographs last. The light changed to green and I sprinted across Massachusetts Avenue to Kresge. 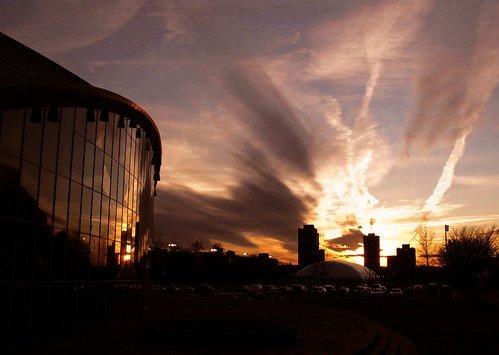 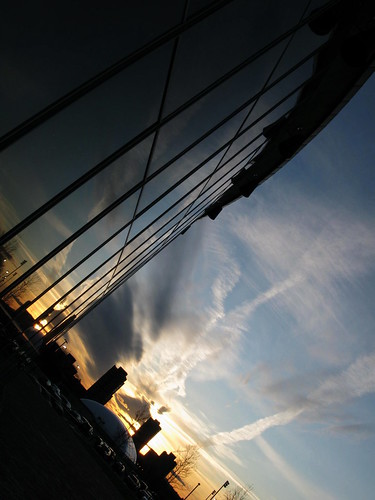 After 10 minutes in meat-locker climes, my hands could have been a lecture demonstration in Solid State Chemistry. I returned to Random Hall in a numb state of iciness, or maybe an icy state of numbness, or maybe a stately numb of iciness, or maybe I should start a new sentence now. Manishika ’12 proceeded to come into my room and actively complain about the fact that my window was open while I assumed a fetal position on the carpet and withdrew into my overcoat. By “actively complain,” I mean “walk onto my desk in order to close the offending source of ventilation.” 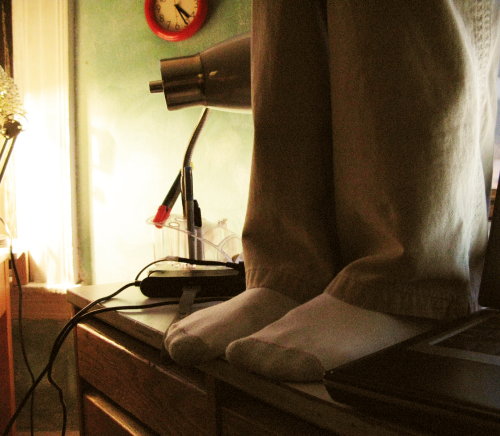 Eventually, Manishika detached herself from my desk and I took a nap while the temperature in my room escalated back to numbers that looked like my test scores in high school. Luckily, it became so unbearably warm that I awoke, just in time to steam inside a thermally-overachieving kitchen while cooking pasta for Random Hall’s dinner with Stu Schmill, MIT’s Dean of Admissions. 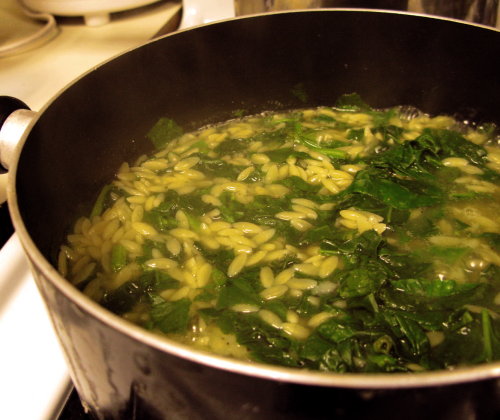 Stu Schmill arrived promptly at 7 PM on Pecker floor, where he was greeted by a freshly-set table in an abandoned dining room. 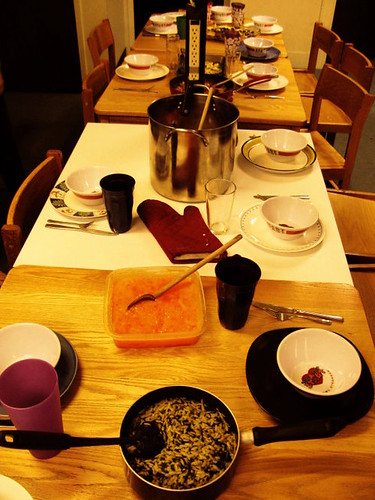 Actually, everyone just ducked under their chairs as soon as I pulled out a camera. Later, I caught them unawares. 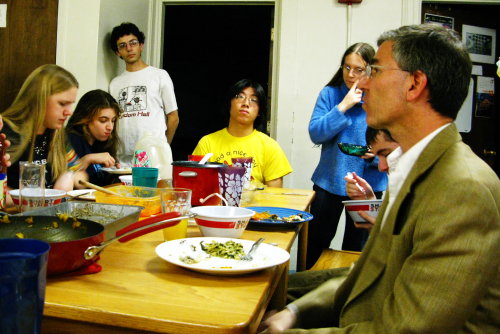 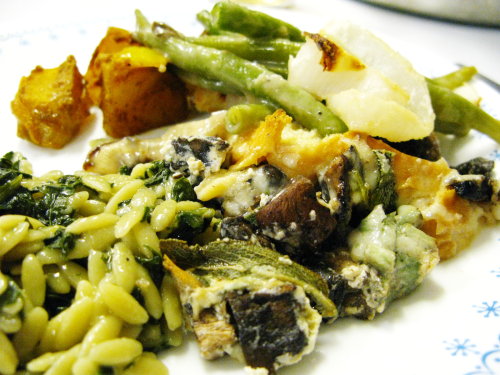 Speaking of food (sometimes, it feels like I do nothing but speak of food and write in parentheses), December is nightly desserts month at Random Hall! Here’s the deal: I’m making dessert for Random on Dec. 18th. Comment with your most brilliant dessertlike concoction (no recipe needed; we’ll figure it out), and perhaps you too will become famous. If I decide to make your dessert, I’ll post a picture of the results before it becomes entirely digested. You will also have my eternal gratitude, but the photo will last longer anyway.

Ok, one more of Kresge before I disappear for another week: 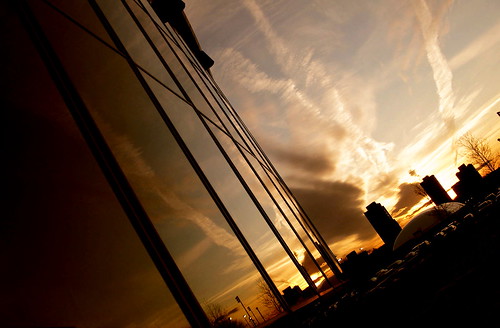