Deciding to Live on Campus by Nisha D. '21

Many bloggers have been posting about their decisions to live off campus, and their explorations in finding new places to live. Today, I’d like to talk about exactly the opposite – deciding to live in the COVID-19 restricted MIT campus.

To clarify, I don’t actually need to live on campus. I am not an international student who the Trump administration is trying to boot out of the country, nor do I have any in-person graduation requirements. I actually just want to live on campus. Wild, right?

The whole decision making process that revolved around this mess was probably one of the most stressful ones of my life, and is a saga that unfolded over many months. I figure that it might be insightful to those of you faced with a similar decision next semester, when – theoretically – juniors, sophomores, and freshmen will be invited back to campus. This might not happen, but I’m sure at least a few of you will have the same difficult choice to make.

I’ll admit it – when we first got kicked off of campus, I was naive enough to believe that we’d be back by May. Spoiler alert, we were not back by May. At some point in April, it started to sink in that not only would we not be back by May, we might not even be back by the fall, and that I would need to find alternate housing.

At some point in this time period, rumors of what MIT’s fall plans would be started to float around. How many students would be allowed back, what classes would be allowed back, if Course 6s just straight up wouldn’t be allowed back,⁠01 i was salty about this one, but i see why it would be reasonable , etc etc. So much stuff was going on in this time that I straight up don’t remember because it was too overwhelming. I purposefully didn’t go to the charettes or the town halls that the administration ran, because honestly, MIT admin has a bad history of actually listening to its students.

I do recall filling out a large survey somewhere in this time period.⁠02 checking my emails from ian waitz reveals that it was sent on 6/12 It asked us to basically rate the pros and cons of the five options that they had distilled from the: 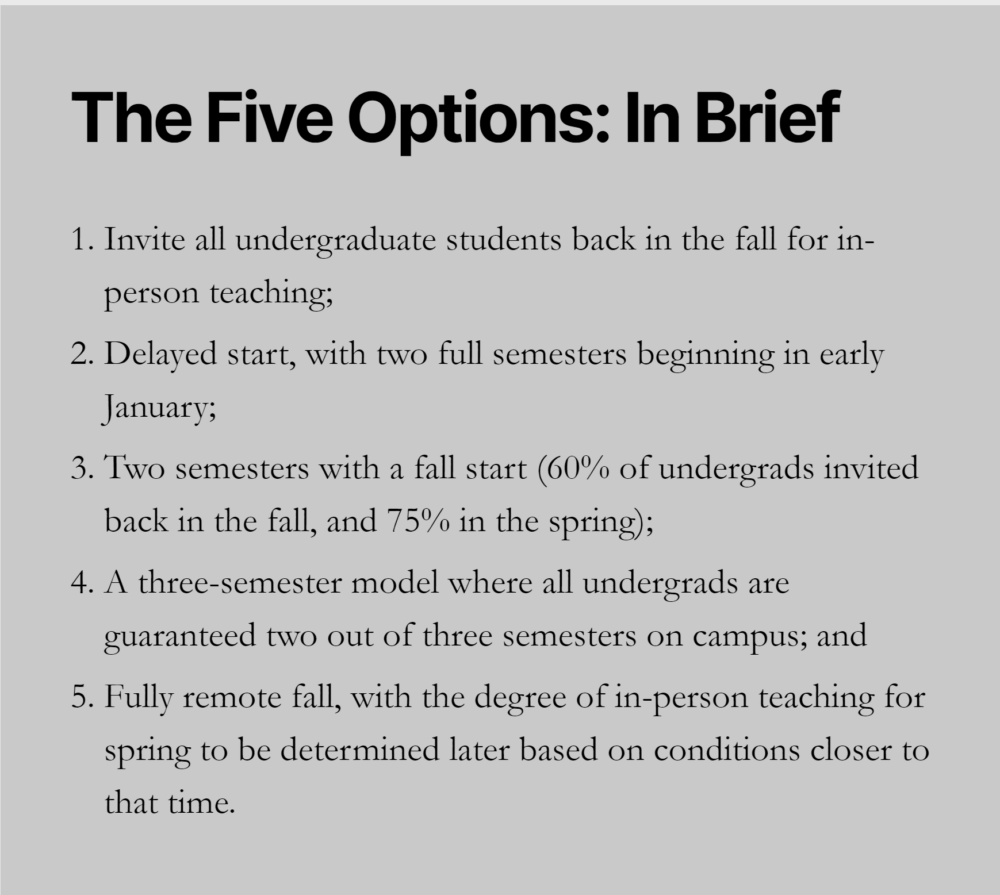 spoiler alert, NONE OF THESE WERE THE FINAL PLAN

Purportedly, a ton of effort went into this. However, nobody really found any of these options palatable. I personally remember filling this out with a lot of rage and exhaustion, and telling admin that I personally would not find it worth it to come back to MIT unless I could live on campus. I assumed, at that point, that I was not going to even be invited back. I had assumed this so hard, in fact, that I was very seriously planning on taking a gap semester to work full-time at the Media Lab.

I did, however, have one bit of foresight that prevented me from fully going ham on that plan. MIT has flaked on us more times than a Stanford student flaking on their dinner plans with friends. They’ve said a lot of things to us in the past few months that have mostly not ended up happening. And that does in fact include ALL FIVE of these options. None of them actually ended up being the final plan. And so, I held off on declaring my gap semester and apartment hunting until the final MIT fall plan was released. This turned out to be a good idea.

Hilariously, MIT admin accidentally released the fall plan about 12 hours early, having it release at midnight instead of noon the next day. It was incomplete, and answers to questions still hadn’t been filled in even though it was supposed to be released the next day, which was… kind of a mood.⁠03 some questions involving the specifics of living on campus were not updated until WAY after the FAQ released, which was really annoying It wasn’t quite a whole plan, but it was clearly what we had been waiting for.

My entire gap semester plan had banked on the fact that I would be invited back onto campus in the spring…because obviously, right? Senior spring is supposed to be the best semester of college, where we get our senior ball, senior week, and graduation. Apparently, we are no longer getting any of those things, which is immensely sad and frustrating and heartbreaking, but understandable.

So, faced with the option of submitting to the harsh campus restrictions and getting to live on campus with a select few friends, or struggling to find an apartment to live more freely: after surprisingly little waffling, I chose the former. Although my home state’s motto⁠04 LIVE FREE OR DIE is also my personal motto, the stress of finding an apartment, plus the finality of never getting to live on campus again otherwise, forced my hand.

Since I only need a semester to graduate anyways, I’ve decided that this will be my last one. As a senior, I don’t really see the point in having my last semester be virtual. I’d rather live on campus, sneak in a few good memories with good friends, and hopefully end on a more positive note than we did last semester.

I’m also very attached to the physical spaces of MIT. Walking through campus itself is an experience that I appreciated a lot when I lived there, but appreciate tremendously in retrospect. Just walking through the Infinite, on Killian Court, and in front of Stata remind me that I go to MIT. I am living my childhood dream, and the dream of many others around the world. It’s hard to remember that feeling in a Zoom room.

So, in the end, I filled out the housing form very close to the deadline just to make sure I wouldn’t change my mind. I put myself in a pod group with my boyfriend and two other senior friends. And of course, I ranked East Campus first.

Things moved pretty quickly after that. We got our dorm assignments on 7/30, got sent room request forms from our RACs⁠05 Rooming Assignment Chairs on 8/4, and got our room assignments on 8/12. I’m back in my room from last year, which I’m psyched about.

Obviously, there’s a lot of stuff for us to read. I still haven’t got around to reading about the storage situation, and I really forced myself to fill out the required COVID-19 online course that all on-campus students had to take. There’s still a ton of stuff on my to-do list.

We move in this weekend, and the first thing we’ll have to do is go to the MIT Medical testing tent to get tested. After that, we’re required to quarantine for a week – like, serious quarantine, not recommended to leave your room quarantine – and then we’ll be allowed to interact with our pod groups in closed rooms and use our dorm spaces in a socially distant fashion. I personally have at least a tiny bit of hope for having some amount of fun this semester. Since sports are cancelled and also cooking is cancelled, that opens up a solid 3 hours of my day to do what I want. Practicing swimming because I got bad at it, training for the half-marathon I’m doing with Petey in October, dicking around with friends, or probably doing more work. I think it won’t be awful. I won’t be surrounded by friends per se, but a few of them will be there, and we can still make good memories together.

Now to be clear, MIT is entirely made by its people, and without a majority of them, I don’t know what it’s going to be like. It’ll be significantly worse than it was, for sure.

But I have to believe that, for my very last semester as an undergraduate here, living in a highly restricted MIT will still have shades of MIT that going to MIT on Zoom does not. I can still live in my room and set it up the way it was before this all happened. I can still walk through the hallways of my dorm and get into random wild conversations with people, albeit with masks and social distancing. I can still speedwalk down Vassar to the Z-Center to exercise, even if the fencing season is cancelled.

Maybe this is all wishful thinking. But at least this time, just maybe, I’ll get to say a proper goodbye to MIT.