Always look on the bright, side of life

Every so often I am begged to write a blog entry about a specific subject. Begged. We’re talking knees, clasped hands, tears, and offers of first borns. The topic in question? Bathrooms.

Apparently bathrooms are a hot topic among applying students. I think back and I realize that I’ve gotten asked about bathrooms before and during most of my dorm tours I end up having to explain how bathrooms work here, so I guess I could give you a bathroom primer.

Now, I only live in one dorm, so I can’t speak for all the dorm bathrooms (which I’ll leave to blog readers to describe in the comments), but I’ve had some experience with the bathrooms of the other dorms and have heard some stories, so I’ll just do the best I can.

Burton-Conner, my dorm, has bathrooms. Yay! We don’t have to use the bucket! First, the biggies:

That’s right guys, if you get into MIT there’s a high likelihood that you’ll get to stand 6 inches away from a naked senior on just your first or second day here! That goes for you too ladies, naked guys standing just 6 inches away! Oo la la!

There’s a slight caveat though. 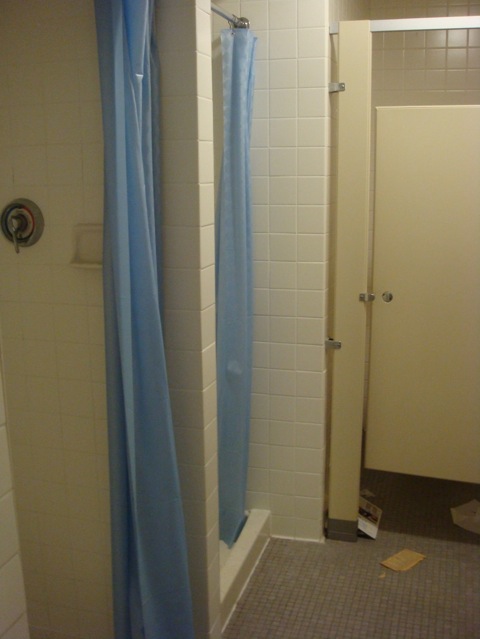 Those 6 inches are tiled, so unless you’ve got x-ray vision or some crazy quantum tunneling ability, those 6 inches might as well be 6 miles.

But maybe talking about this is a little abrupt, let’s start from the beginning. In Burton-Conner there are suites of people that live together, kind of like mini-apartments. The suite I’m sitting in right now houses 8 people, the largest suite on our floor. It is comprised of both males and females (in fact, only one dorm at MIT is single sex, all the rest are coed) and we get along swimmingly. In addition to our suites there are several others, one of which is single sex.

Dorms = coed.
Floors = coed.
Suites = potentially single sex, if you manage to do rooming right (but we’ll save that for a later entry).

There are 7 bedrooms, one kitchen, a lounge, and two bathrooms per suite. Each bathroom is normally left open, indicating that nobody is using it. 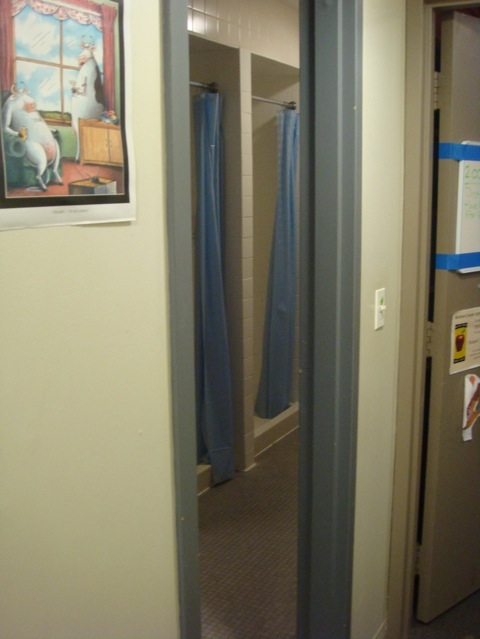 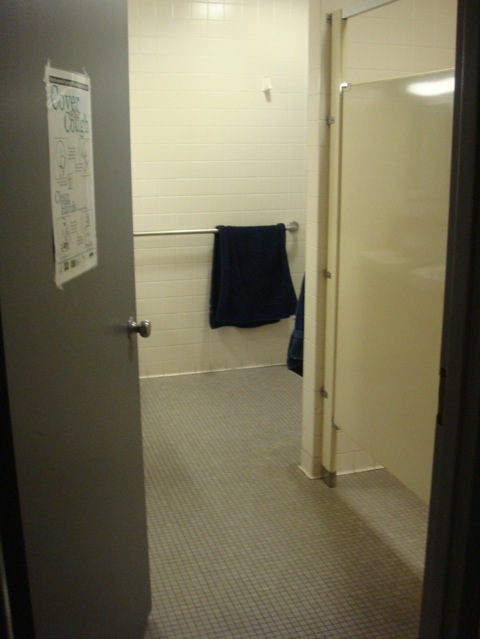 Upon entering a bathroom you are usually faced with one of three things, either sinks, showers, or a toilet. Starting with sinks . . . 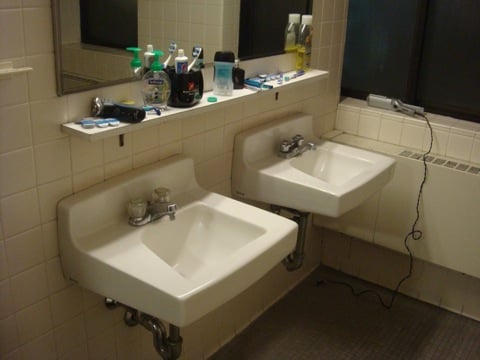 This particular bathroom has two sinks and a little shelf above it. The shelf is a convenient place for the necessities: gel, deodorant, toothbrushes, razors, contacts, cologne, lalalalala!

Variations on a theme 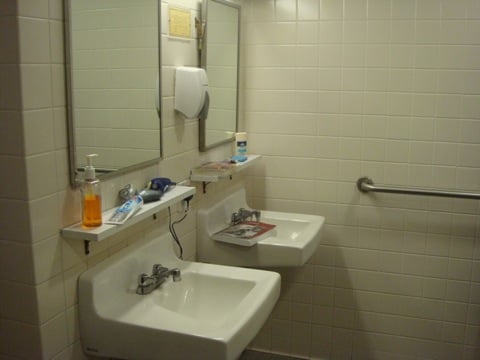 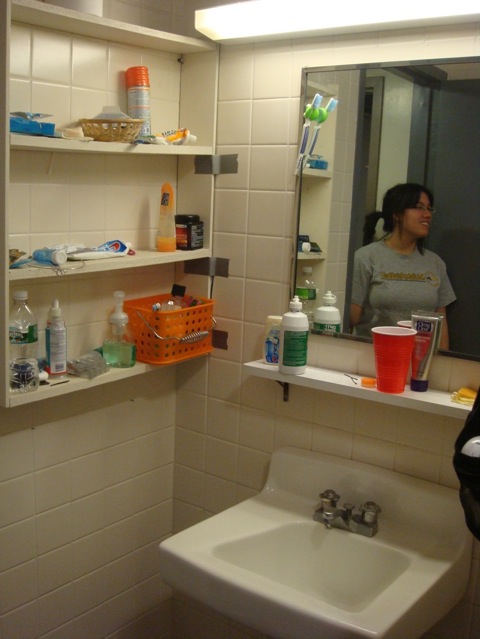 As you can see in that last picture, Dorothy is bad at getting out of pictures, and there are additional shelves in each bathroom for more storage. 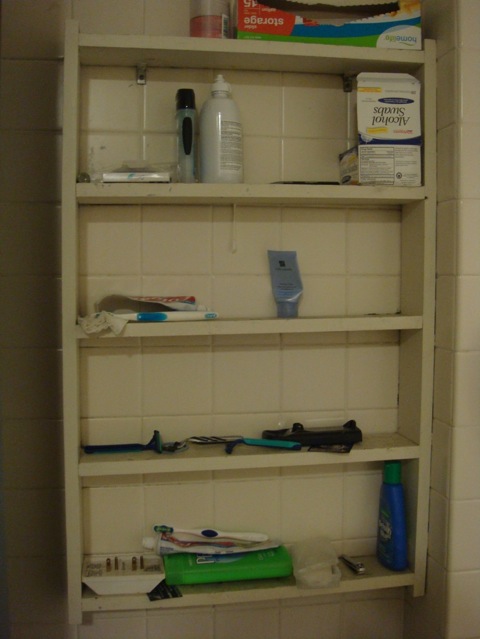 Next are the actual toilets. Nothing too exciting here, just a typical stall with toilet. As a general rule there is only one toilet per bathroom (at least in Burton-Conner), evidence that my dorm doesn’t encourage cooperative bowel relief sessions.

Several dorms have bathrooms with multiple stalls and are coed as well, but again, nobody cares. It’s not like somebody’s going to walk in, kick open your stall door, plop down on your lap and start up a conversation.

Next, duh duh duuuuuh, the showers! As I said earlier, there may be multiple showers per bathroom, but they’re quite separate. 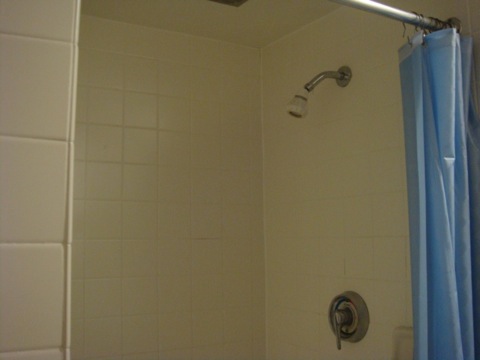 Then again, there are also bathrooms with just one shower. 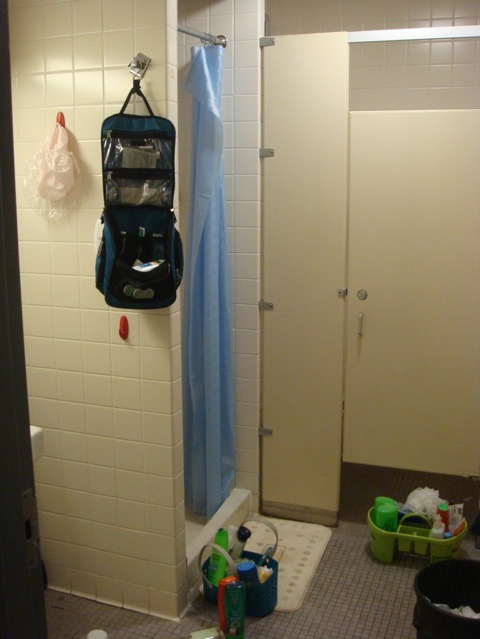 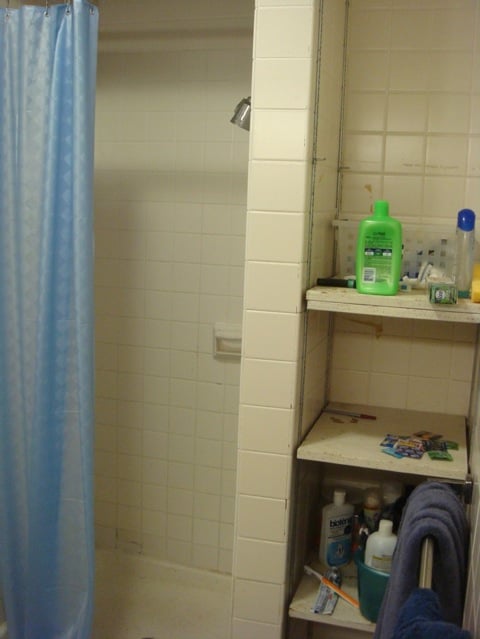 There are also some people who are extremely excited about their toothbrushes. 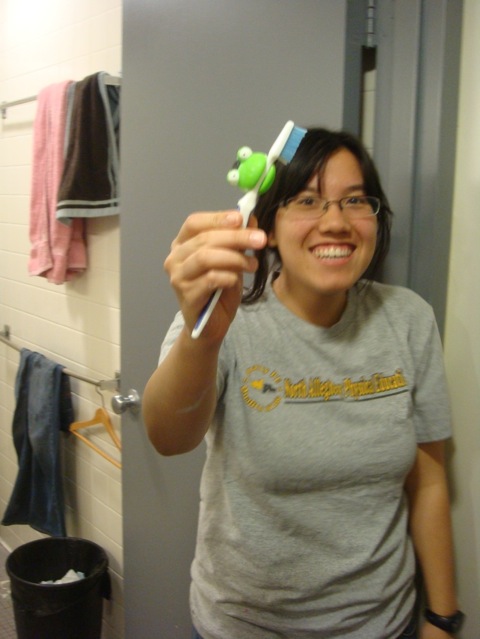 Now, since we’re going to have guys and dolls in the same bathrooms we should probably talk about some rules. These rules probably differ from bathroom to bathroom, but these are the rules for our suite.

1) If the door is open, you may enter the bathroom.
2) If the door is closed you MUST knock.
3) If nobody replies, you may enter, cursing the last restroom user for not propping the door open when they were done.
4) If somebody replies, wait patiently for them to be done using the bathroom.
5) If you hear somebody in the shower, knock hard. Generally they will say “come in” and then you can shower too.

That’s it, just that simple.

“But college students are slobs, who cleans the bathrooms?”

In Burton-Conner? The cleaning staff! Not so for all the other dorms. I don’t know specifics for each one, but I know that in Simmons nobody cleans the bathrooms for you : (

Two ply? Only on special occasions

Accidental walk-ins? None that I’ve heard of.

From my experience, there are so many things at MIT that are important, difficult, and take adjusting to, worrying about bathrooms just isn’t that critical. We’re grown ups now, just be civil and polite and everybody gets along alright. You may not be used to having to share a bathroom with a girl or a guy, but you’ll find that very little changes (except the length of the hair you find in the shower), so don’t sweat the small stuff and worry more about, well, anything, more than bathrooms at MIT.