at long last, i got to go to gamer christmas

i actually had a wild ride with e3 because i realized in may that i could actually attend this year, and immediately rushed to the website to buy a pass. i then realized that the registration for industry passes – tickets for those in the game industry – was closed, and i would have to purchase a gamer pass, which is a whopping $350 a day. i was too broke at the time to even think of purchasing that (and even with money, i don’t think i would have), so i resigned myself to the disappointing realization that since sony (the corporation that playstation is part of) wasn’t attending e3 this year, i probably wouldn’t be able to attend either.

but a few weeks later, a few days before i started work, i woke up to an email in my inbox saying that my e3 registration had been confirmed! i had no idea how i had received such a fortuitous email, and after some consultation with the intern group, we determined that santa monica studio (the place i work) had bought all of its interns e3 tickets, making all the other interns at other playstation locations very sad and jealous, lol.

so yeah – i went to e3! this has been a dream of mine since e3 2015⁠01 the e3 that the final fantasy vii remake was announced , before e3 was even open to the public. and of course, for those of you who keep up with gaming news – the final fantasy vii remake was available to demo this year because they just announced that it’s coming out next year⁠02 i cried tears of joy for like an hour , making this literally the best year that i could have attended!

when i found out that the final fantasy vii demo was gonna be at e3 for sure, i pretty much had one goal for my entire e3 experience: demo the damn game. here is a recounting of my day at e3 (spoiler alert: i achieved my goal).

GAME START: i woke up at 6 am⁠03 if this isn't an indication of how determined i was to play the demo, then i don't know what is on wednesday to catch my 6:25 bus. the bus stop is approximately 13 minutes away. this was a poor decision in retrospect, but i had slept in the clothes that i wanted to wear⁠04 i was proudly sporting the god of war dev team shirt , so all i had to do was brush my teeth, grab the sandwich i had made the night before, and head out the door. i had a minor panic attack because my public transit app told me that the next bus was at 6:45 and i had promised to meet some interns at the office at 7 to uber to the convention. i then realized that the public transit app was merely boosted, and there was still a bus at 6:25, but i had wasted about 3 minutes panicking and seeing if i should call an uber, so by the time i actually left to the bus stop, it was about 6:14. i pretty much ran/speed walked the whole way to the bus stop, and actually made it there pretty fast – 6:22, with 2 minutes to spare before the bus actually got there. quest: completed.

LOADING LEVEL: i made it to the office by 6:45⁠05 turns out that when it's too early for there to be traffic, there is actually no traffic, a rarity in LA , so i took the extra time to hang out in the kitchen and inhale some coffee. we called our uber at 7:15, and since LA traffic was in full swing by then, we got there by 8:15, fraying a few of my nerves because i had wanted to be in line by 8⁠06 i actually picked up my badge early so i could beat some of the line, because i am extra . i also lost a bit of my advantage by standing in line in the wrong place, but we still had a solid place in the queue – about halfway in.

doors opened to industry people at 9⁠07 the public can only enter at 12 , and as a part of sony playstation, we were included in that special access! but when 9 rolled around, it was still going to be a total free for all, so i prepared myself to book it to the final fantasy vii exhibit, which i could see through the closed doors while i was waiting in line. 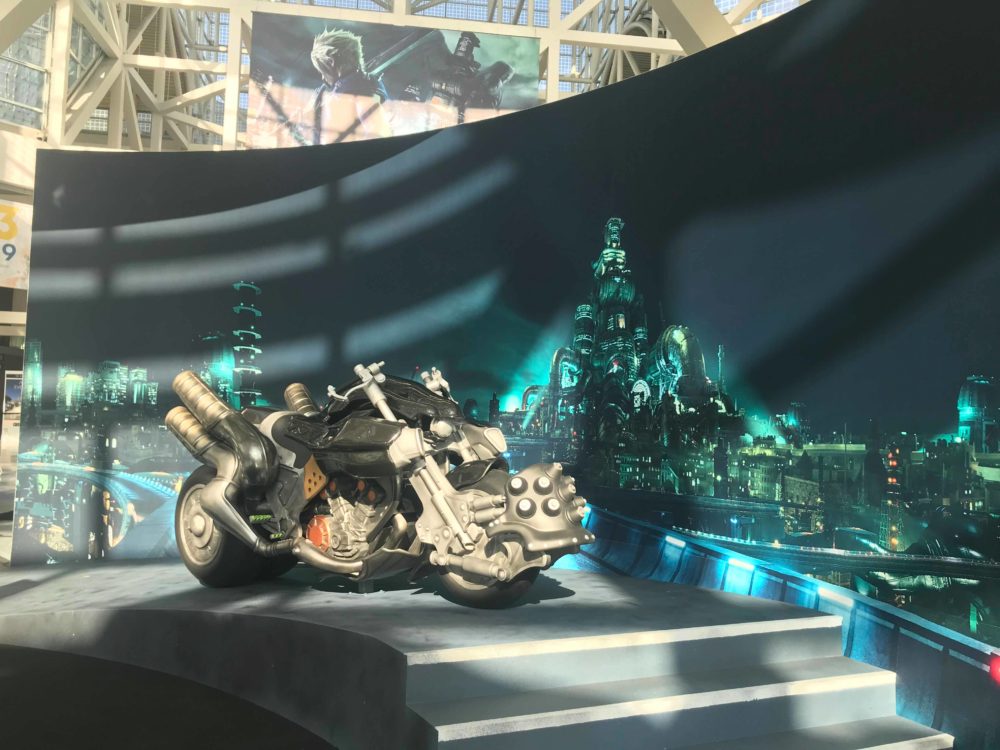 this was the first thing i saw when i walked into the convention center, and i was so happy – it’s cloud’s (the protagonist of final fantasy 7) motorcycle against a backdrop of midgar at night 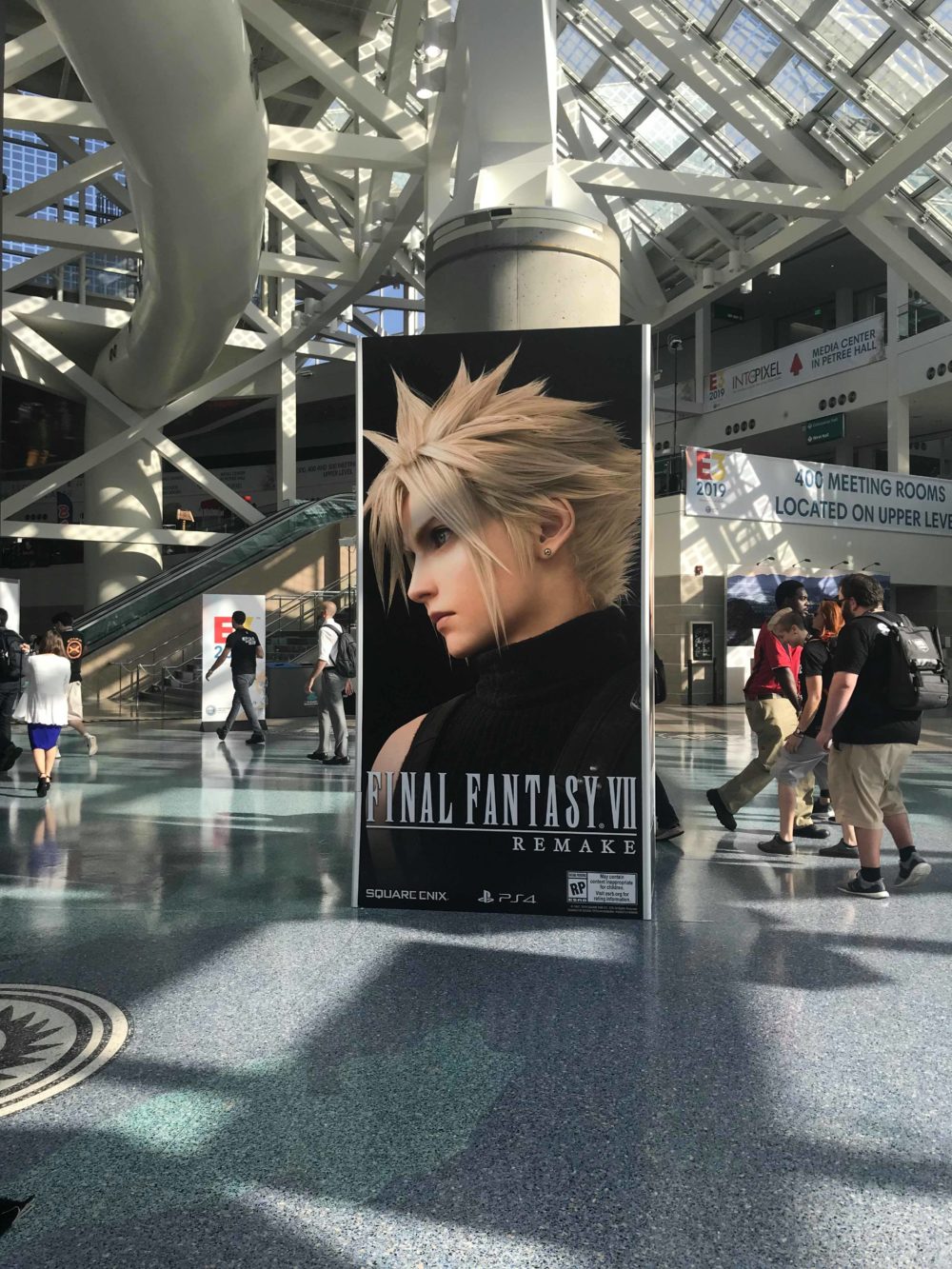 cloud, my son, looking more beautiful than ever in the good year of 2019 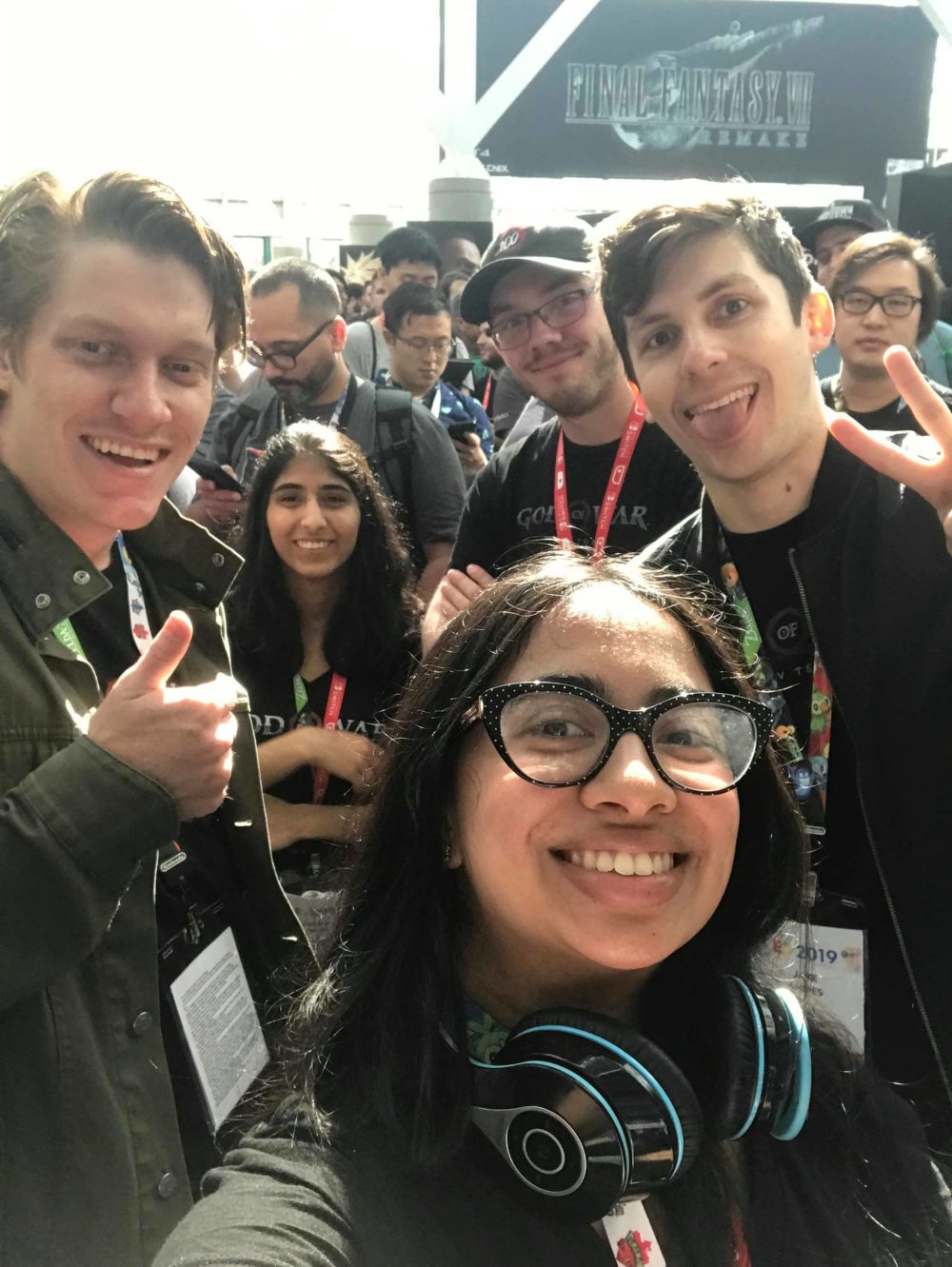 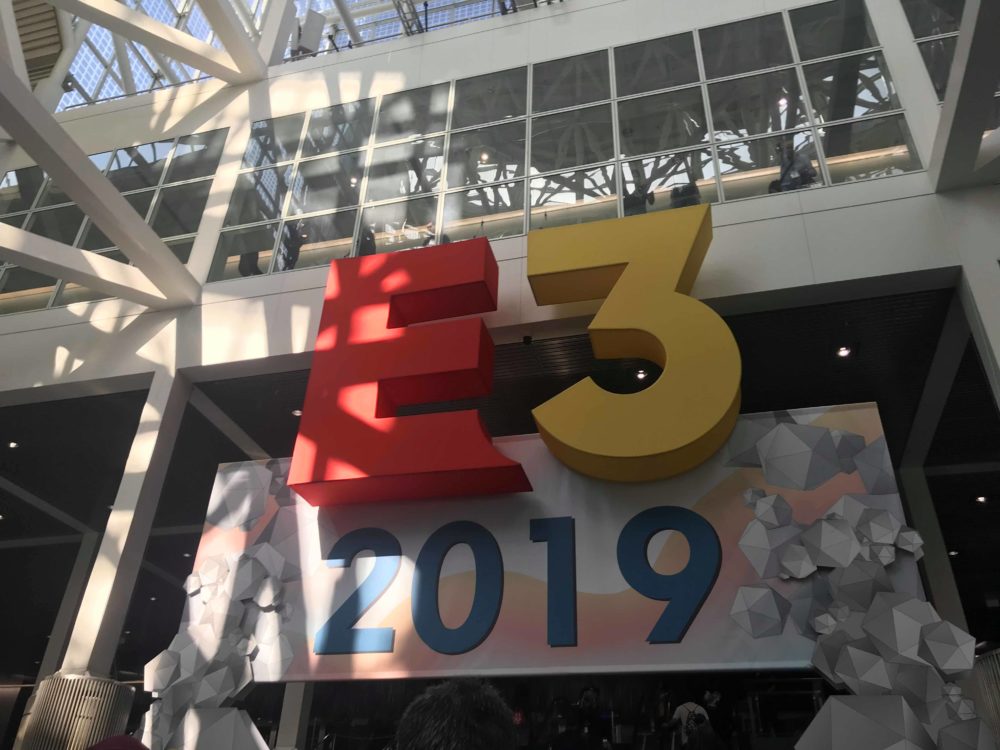 FIGHT!: the gates opened at 9, and to my great surprise, literally everybody turned out to have the same goal as me and EVERYBODY booked it to the final fantasy vii demo. luckily, i am small and speedy, and i managed to make it into the middle of the line to get a ticket for the 10-11 demo. apparently, if you weren’t in line in the first three minutes of the mad rush, you didn’t get a ticket to one of the three demos they had that day. i got super lucky. 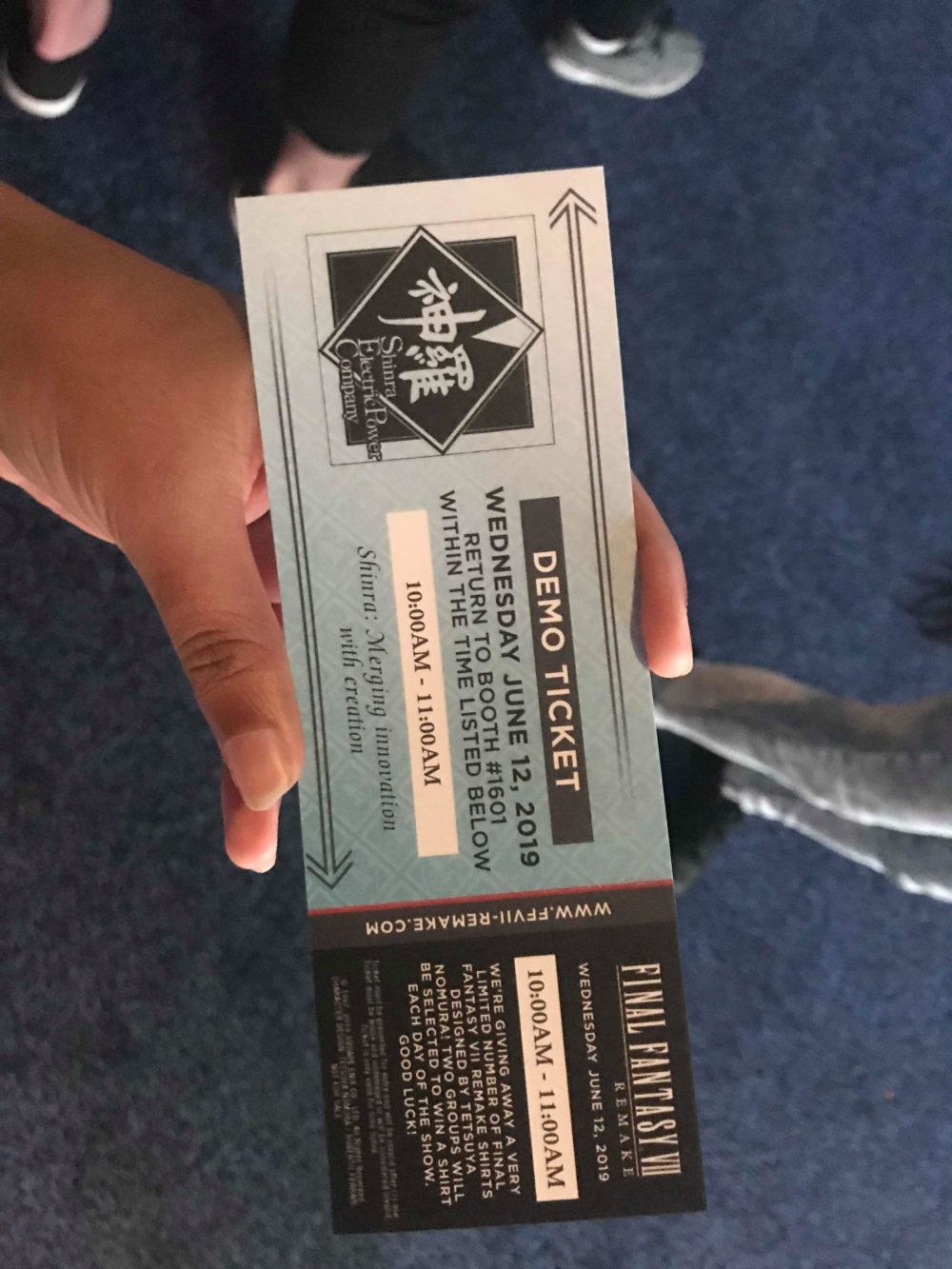 one of the precious demo tickets, which were super aesthetic and well themed!

i hung around the exhibit for another half an hour because i wanted to be the first in line for the 10-11 demo, and chatted with some of the staff. they had shinra company themed shirts⁠08 the shinra company is the huge megalomaniac corporation that basically rules the world in final fantasy vii , and there were even two staff members dressed up as turks⁠09 the shinra company's elite assassination squad, basically , which made me really happy. they were in character too! 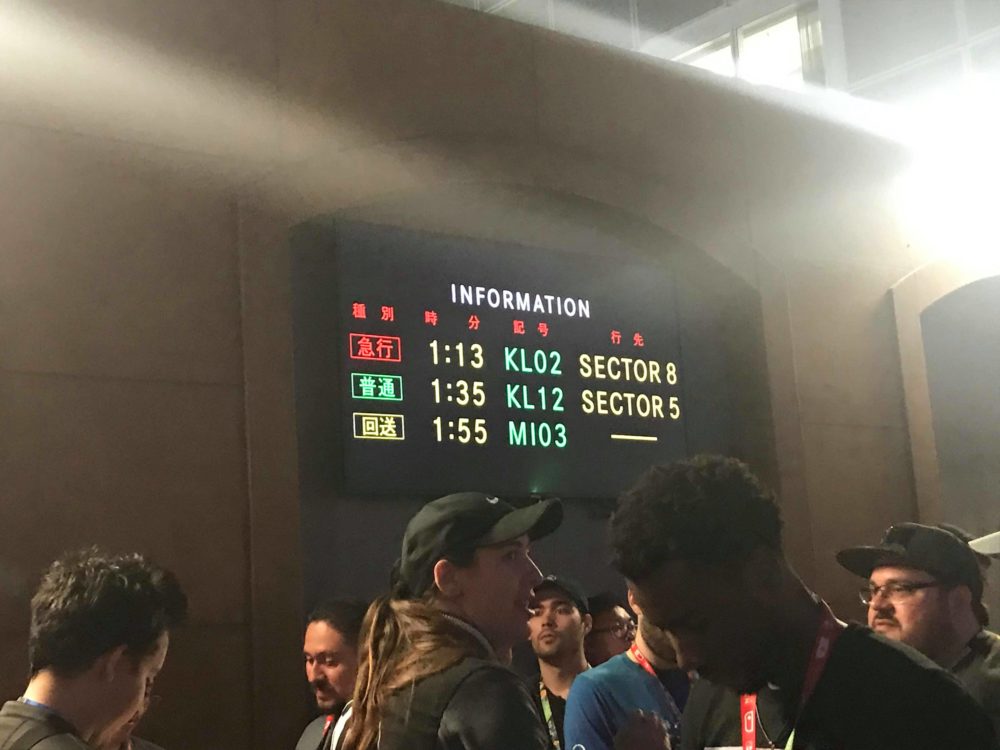 i finally got into the demo around 10:15, and unfortunately i couldn’t take any pictures inside the demo room, but it was amazing! first, there was a little explanation given by one of the characters⁠10 jessie, for those of you who have played - she 'hacked' the shinra feed to tell us how to defeat the reactor on how the battle mechanics worked and then we actually got to play the first twenty minutes of the game, up to the first boss fight! the new battle mechanics are really fun, and the graphics are beautiful, and the music is amazing. i literally couldn’t have asked for more. i was over the moon for the entirety of the demo, and i’m lowkey still over the moon because it was just that good. march 3rd 2020 here we come! 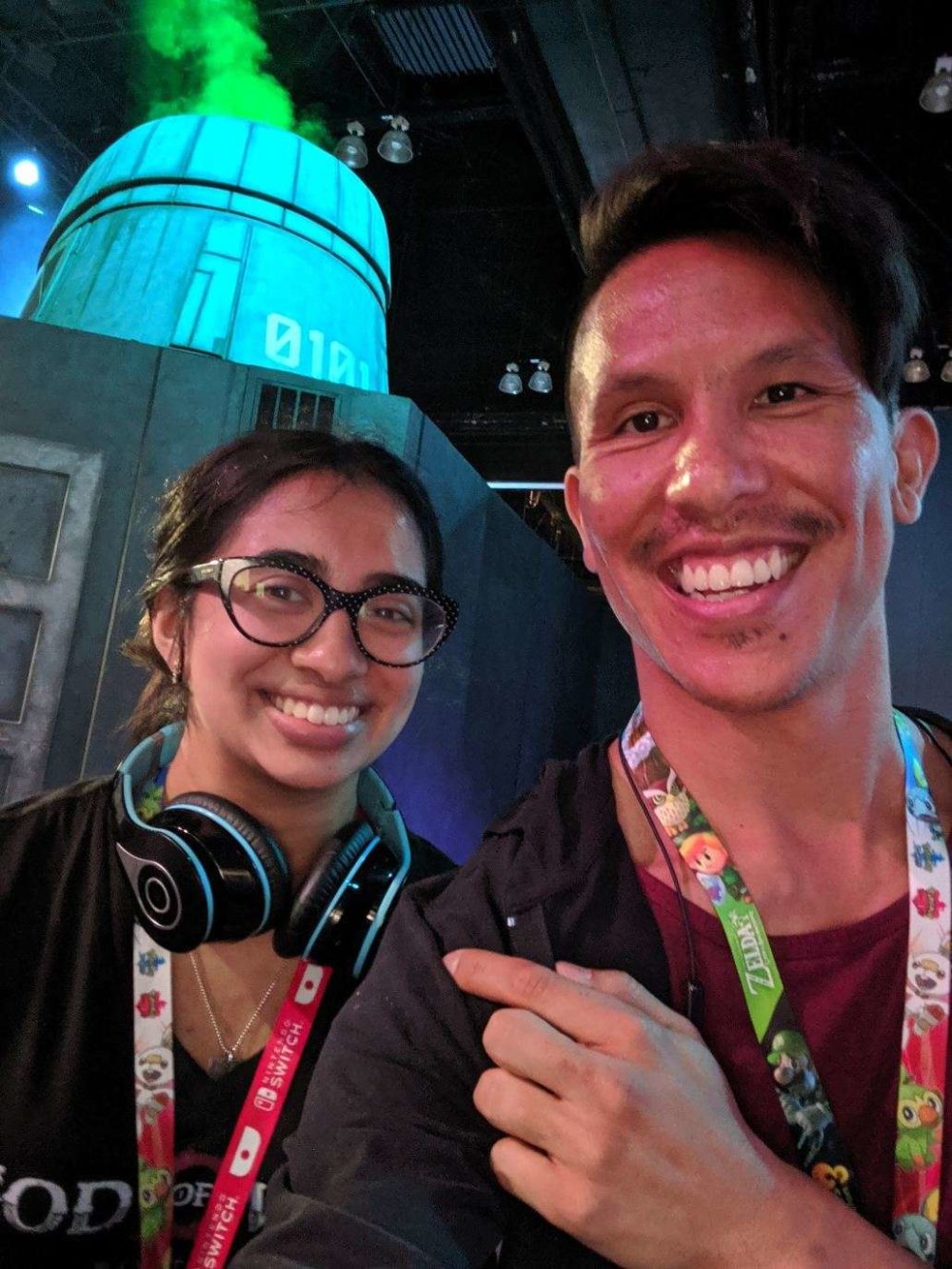 a coworker and i snapped a selfie in front of the super dope final fantasy vii exhibit after finishing playing the demo :)

OPEN WORLD: after finishing the demo, i had pretty much exhausted everything that i had wanted to actually do at e3, so i spent the rest of the day wandering around. here are some of the cool pictures i took and cool things i saw. 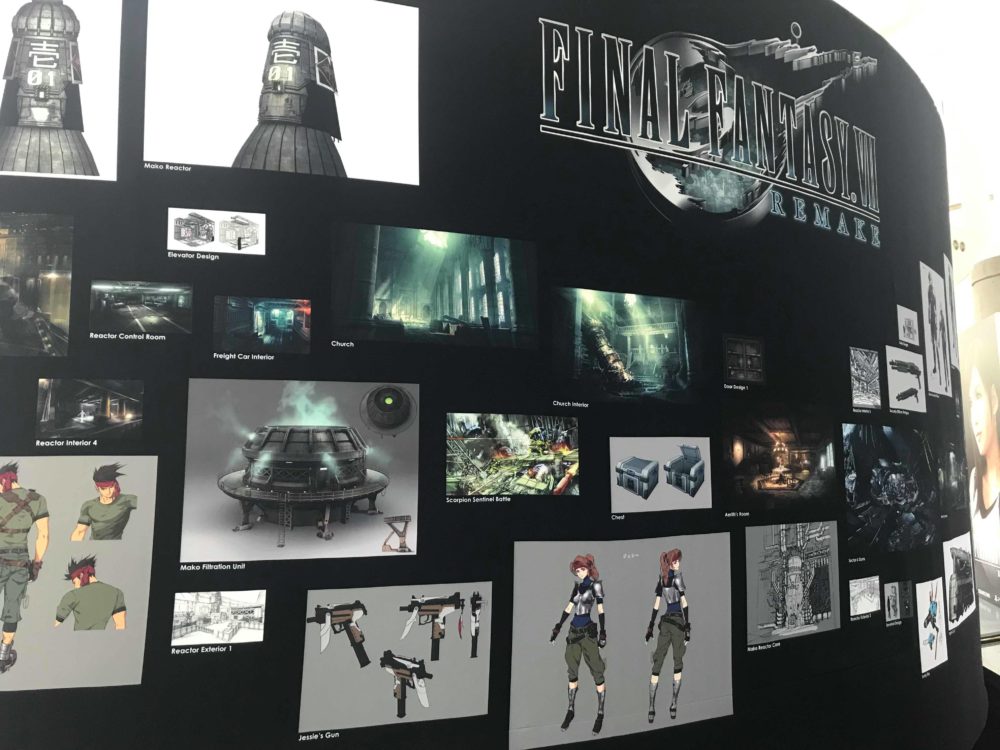 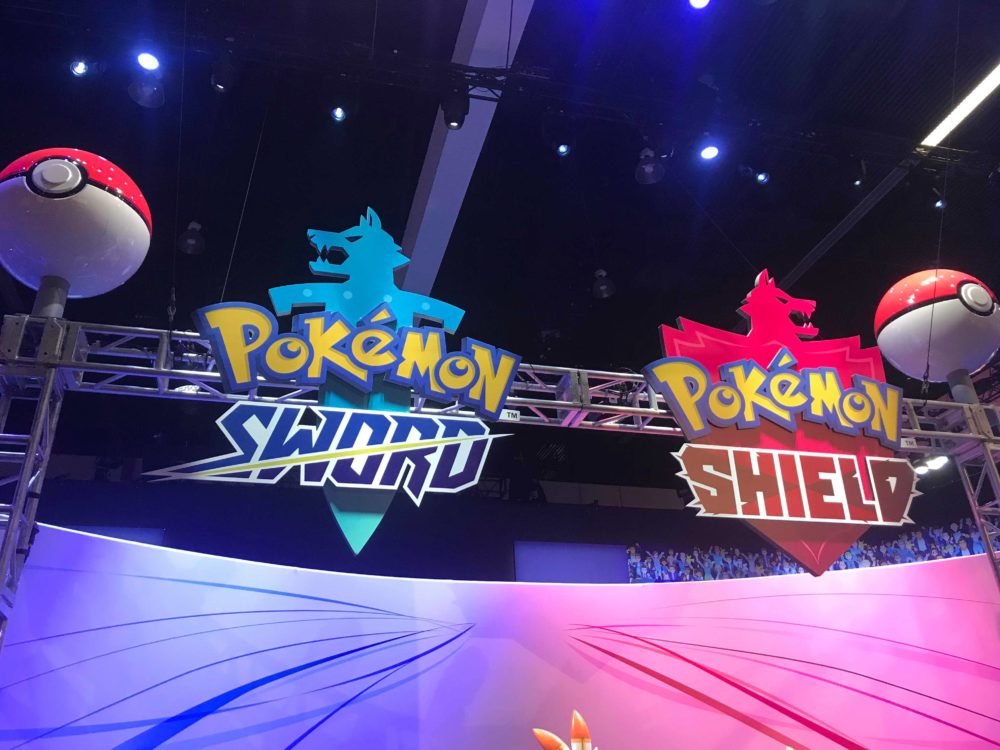 these logos are so dumb but i’m here for them 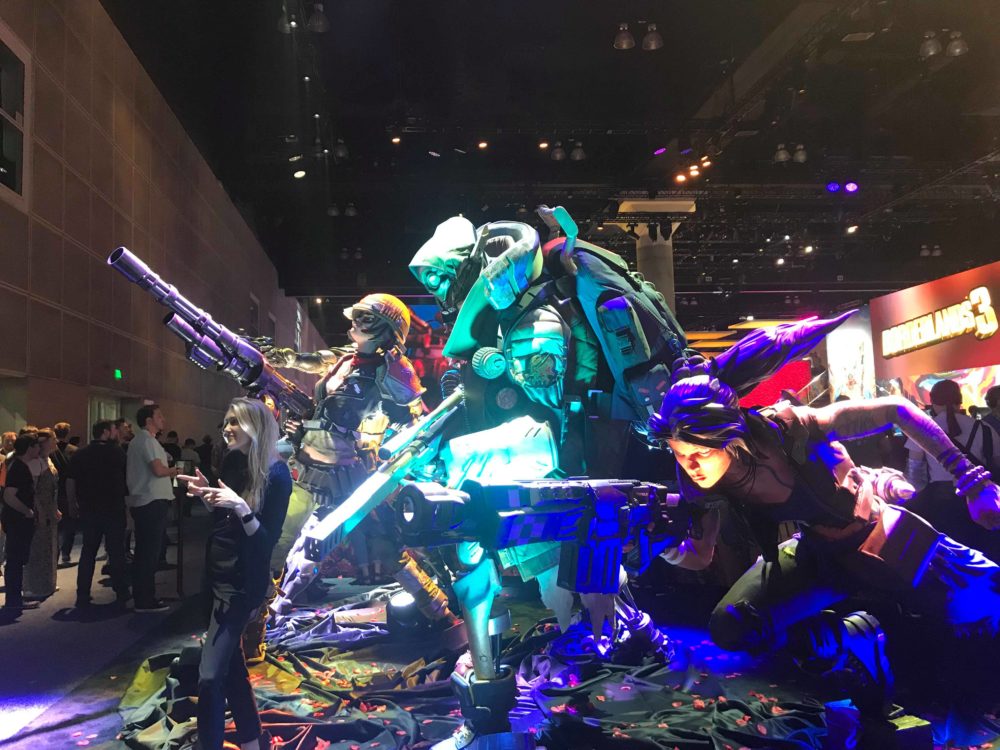 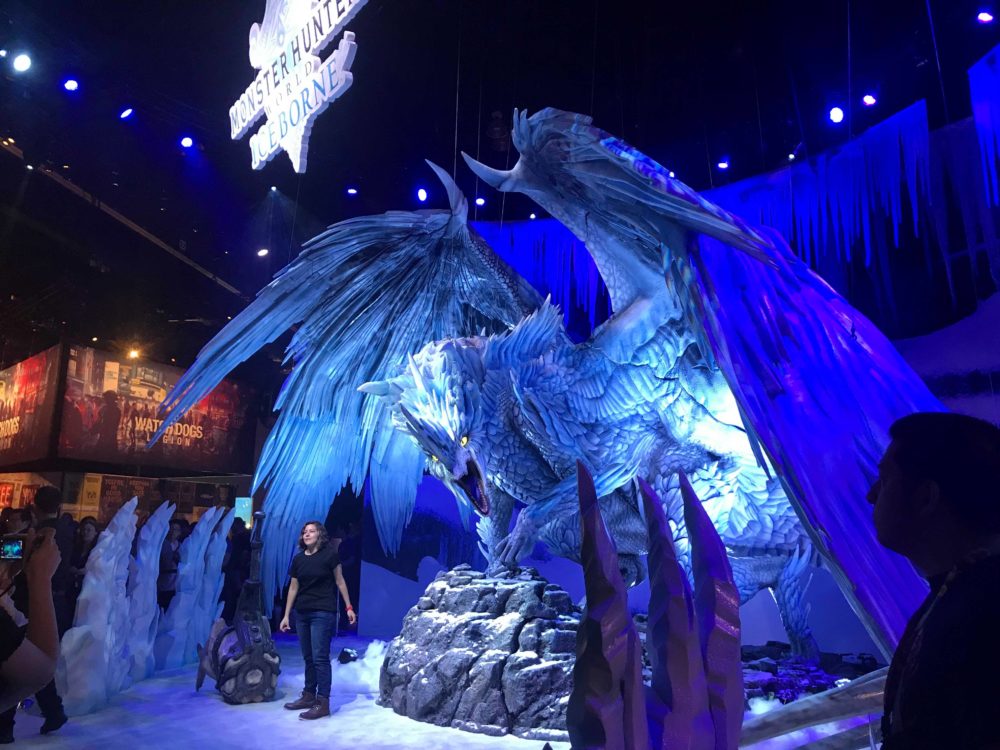 capcom brought a whole ass dragon to e3 i guess 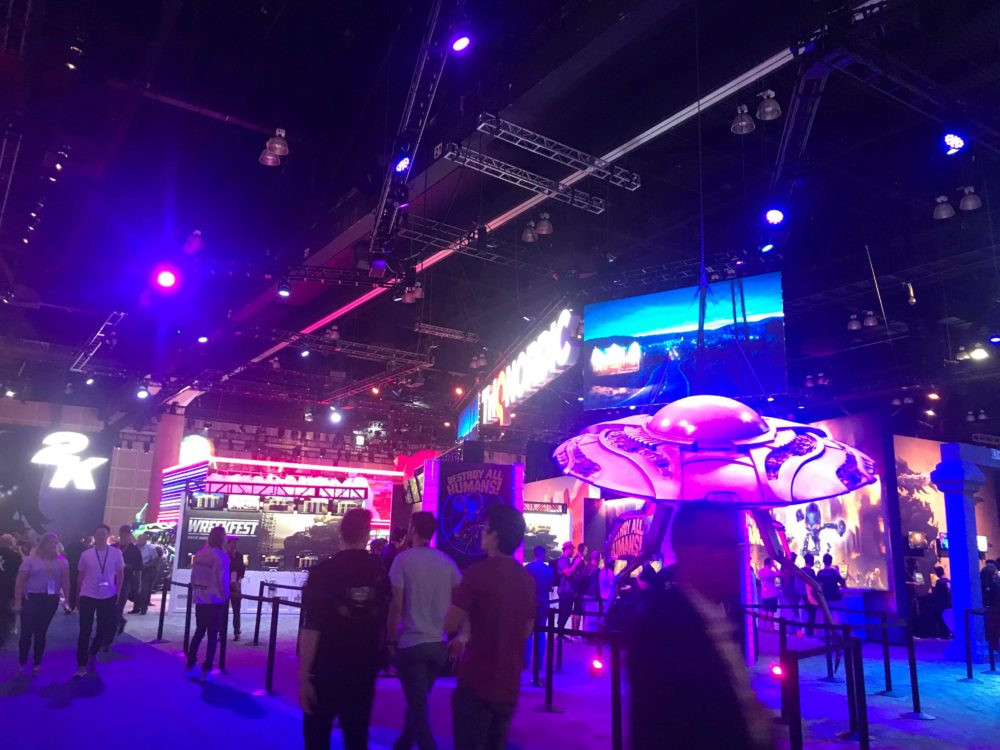 so many pretty lights! 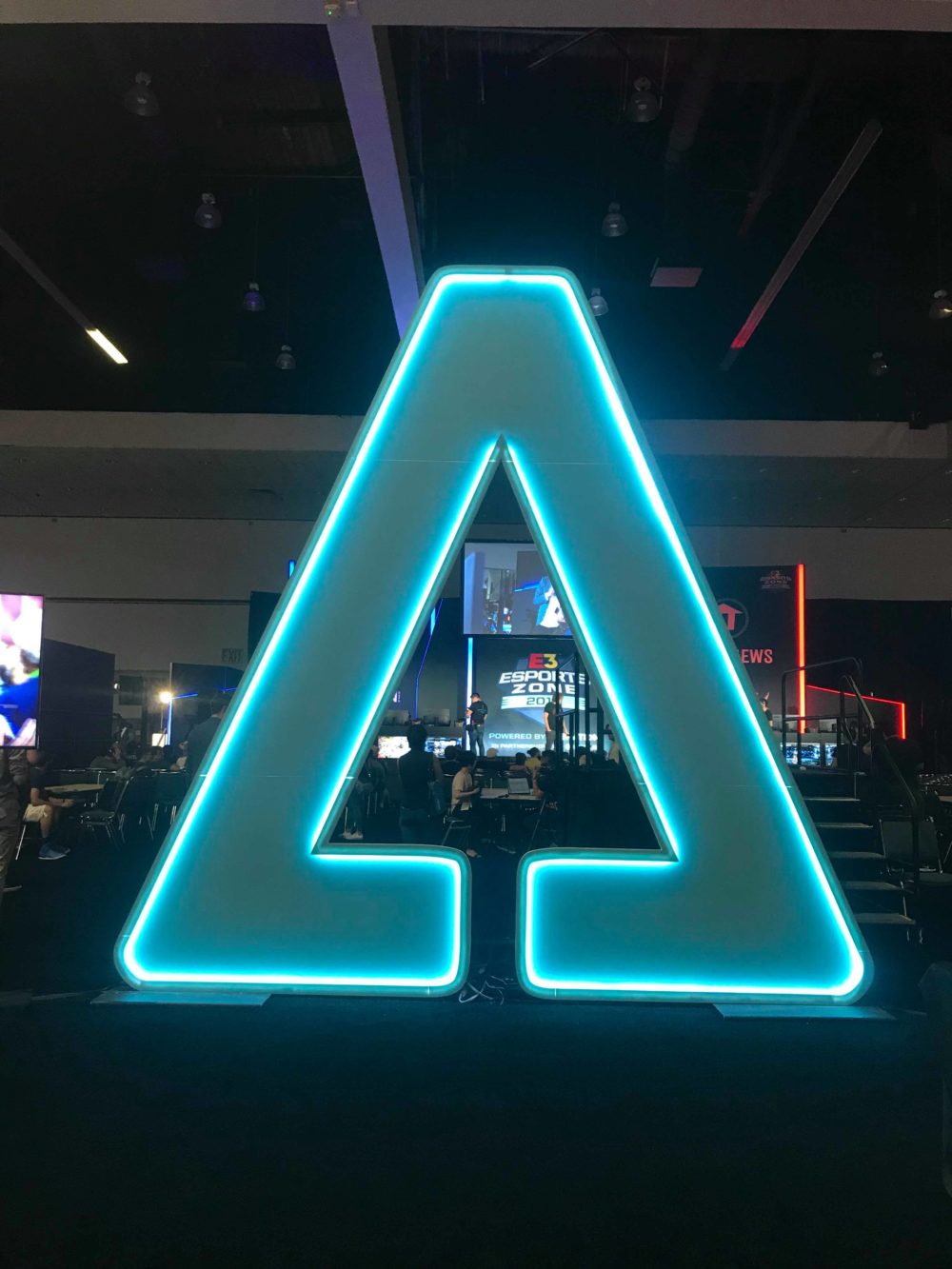 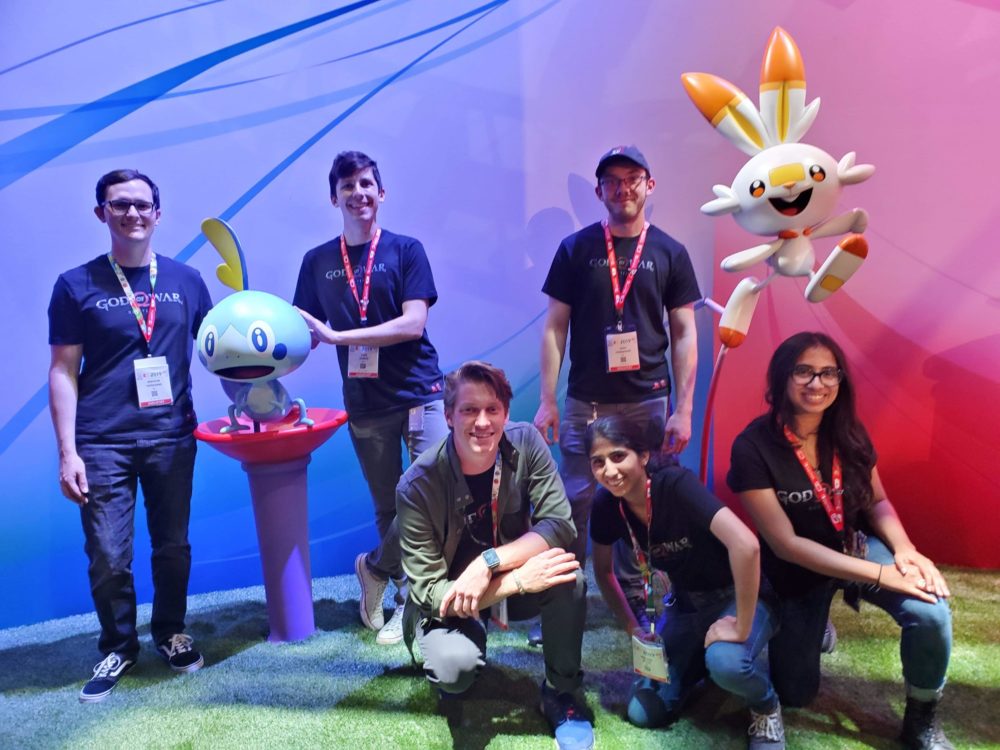 the other interns and i + pokemon starters! 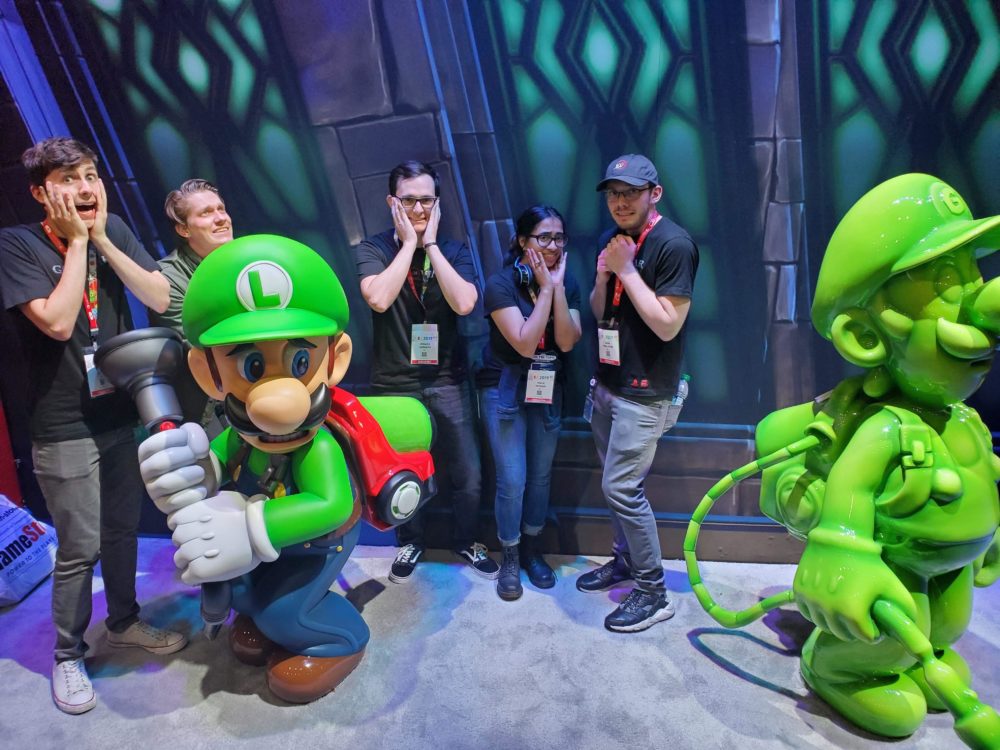 interns being scared with luigi outside the luigi’s mansion exhibit 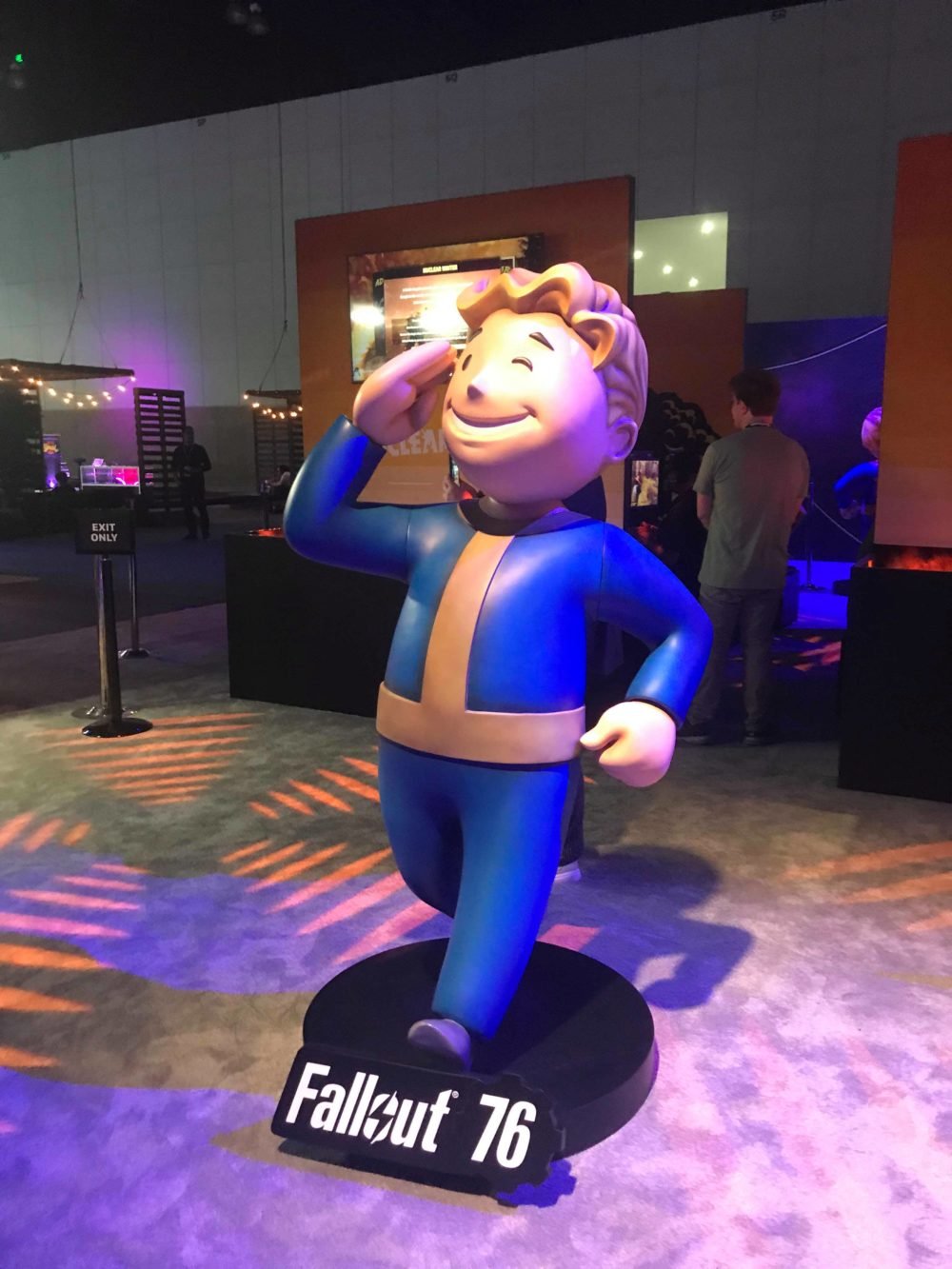 all in all, i had a great time, and i’m really glad that MIT has given me the opportunities to get hired at places like playstation, which leads to worlds of new opportunities on its own! :)

what are y’all most excited about from this year’s e3? let me know in the comments!