Eternal sunshine of the sleepless mind by Yan Z. '12

Once again, the title has practically no relation to the actual blog entry.

Remember the plot of The Matrix trilogy? Neither do I, which is why I IMDB’d it before writing this blog. Fun fact: under the space-warping influence of continued sleep deprivation, my initial 5 days at MIT were about as coherent as any scene in the Matrix movies that didn’t involve people/cars/people-standing-on-cars suffering gratuitous physical damage (that is to say, pretty much incoherent but inexplicably awesome anyway). Small wonder that I still recall those warm-hued summer days with a mellow, hazy sort of fondness that I usually reserve for Dali paintings and Wikipedia articles that I don’t really understand.

Luckily, my first week was lovingly wiled away in pre-orientation activities of mostly inconsequential leisure, like building miniature “robots” and touring MIT/Boston and eating more food per day than certain small countries. I dedicated hours each day to mastering the subtle art of falling sleep randomly in public areas. Amongst a vast repertoire of somnolent performances, a few particularly stunning occasions come to mind:

-As part of the Discover Mechanical Engineering Pre-Orientation Program, I was shuttled off on a tour of a cutting-edge product development company, which involved a presentation, walking up and down stairs, more presentations, milk and cookies (no kidding), and a final presentation. During one of the presentations, I dozed into soundless oblivion. I was standing up. The presenter was about four feet away in front of me and talking about something extremely interesting, just not as interesting (apparently) as the delightfully sublime sensation of a vertical nap.

-One fine night, I fell asleep on a roof.

-Discover Mech. Engineering concluded with a Battle Royale of home-made soccer-playing robots at the Boston Museum of Science. My team’s robots were significantly less soccer-ific than the average Brazilian, which meant that we spent most of the later rounds cheering for the teams that had shown the greatest mercy in making us look unequivocally lame to the dozens of 12-year olds in attendance. A few hours in, my exhaustion level cracked past the point where a 2-foot-by-4-foot plastic bin at the sidelines of the arena started to look less like a container for storing robots and more like an oddly-shaped futon. I have simple tastes when it comes to furniture, so I folded myself into what was essentially oversized tupperware, closed the lid, and enjoyed a nap while practically everyone else in DME pulled out their digital cameras and took a picture of me for the benefit of the Facebook community.

And then came September, when Fake MIT (orientation) ended and Real MIT (classes) began. All through first semester, I averaged about seven hours of sleep per night, plus or minus a few naps per week which may or may not have occurred consistently during certain lectures (my apologies to the MIT biology department). During IAP, six hours per night was a luxury. The single class that I took in January, which was perhaps the most profound thing that I have ever experienced other than Star Wars: Return of the Jedi, not only started at 9 AM every single day but also consumed my remaining free time for breakfast. To the unending dismay of my brain cells, the past few weeks have been likewise. Here’s the problem: I’m programmed to wake up at 7:30 AM naturally, and I haven’t yet debugged my internal clock. The obvious antidote is to go to bed around 11:30 PM, which would be a splendid proposal if not for the fact that distracting things always seem to happen sometime around 11:15 PM. Par example:

11:16 PM, April 11: Just as the clock strikes Bedtime, Edward ’12 conspicuously bounces into my room and says, “I bet I did worse than you on the 8.022 test!” Not one to back down from a challenge, I enthusiastically insist that my score is lower. Edward persists in disagreeing. We make a bet. I win a dollar because I did worse by 2 points. I gleefully stash my dollar in my desk drawer and decide to start another problem set. It’s 4 AM when I finally retire. I wake up at 7:30 AM anyway, dangit.

The continued iteration of slumber-thwarting incidences like this one means that I haven’t slept more than six hours or so in a single night since before Spring Break. Before the moms reading this blog recoil in horror, let me say that I have a plan to make sure that I will be Perfectly Fine in the long run. To compensate for the sleep debt accumulated throughout my academic career, I will sleep for an entire six months as soon as I receive my first retirement pension.

In full seriousness, I’ve always suffered from clinical weirdness when it comes to sleep habits. Most of my friends/roommate/former roommates went to bed sometime around 2 AM on weekends and slept until noon, whereas I would go to bed at the same time and wake up at 8 feeling hyperactive and lonely at the same time (if MIT is like Manhattan at night, it’s Prarieville, Iowa on Sunday mornings). Manishika ’12, for instance, goes to sleep before midnight every single day (!!) and gets at least 8 hours, easily. Someday, her un-exhausted face will be on the cover of MIT Medical’s “How to Get Enough Rest” brochures.

Note that I mention this right before CPW (hint), a celebration of sleep deprivation in its most glorious, irresistible permutations. Attendees: please stop reading now and go to bed. You can thank me later.

Speaking of which, last Friday was one of those bloomingly springful, apple-hued afternoons in which a nap sounded about as appealing as dry cat food. I opted instead to grab a camera and frolic (not really) around MIT snapping away at the resplendently sun-soaked architecture, tourist-like. Voila: 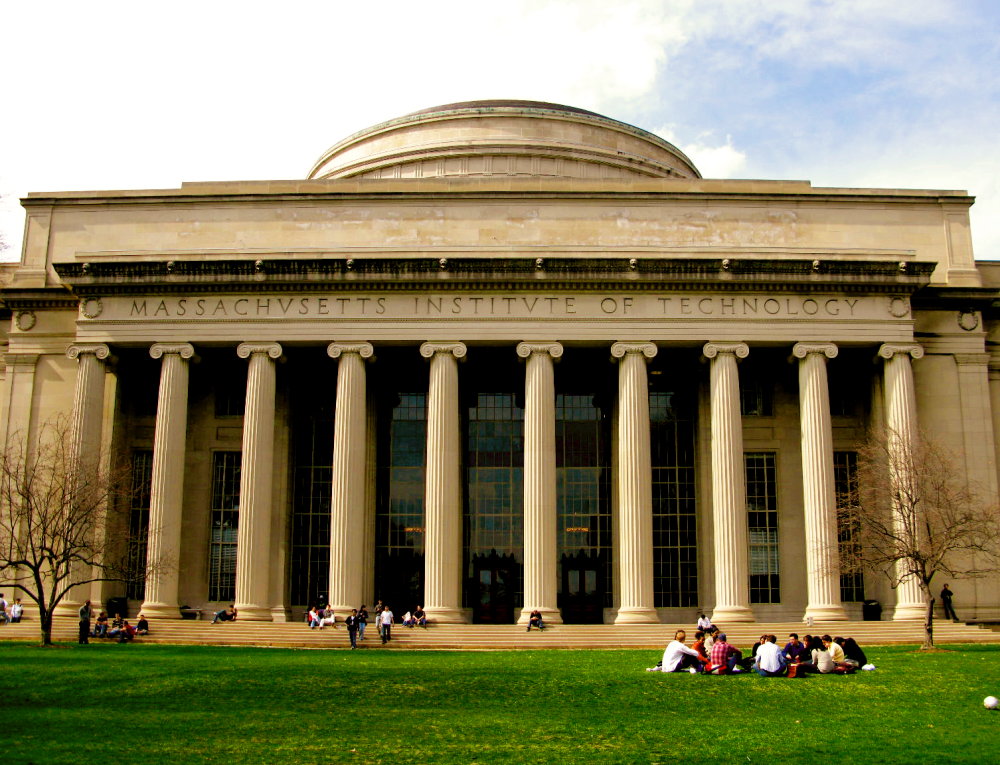 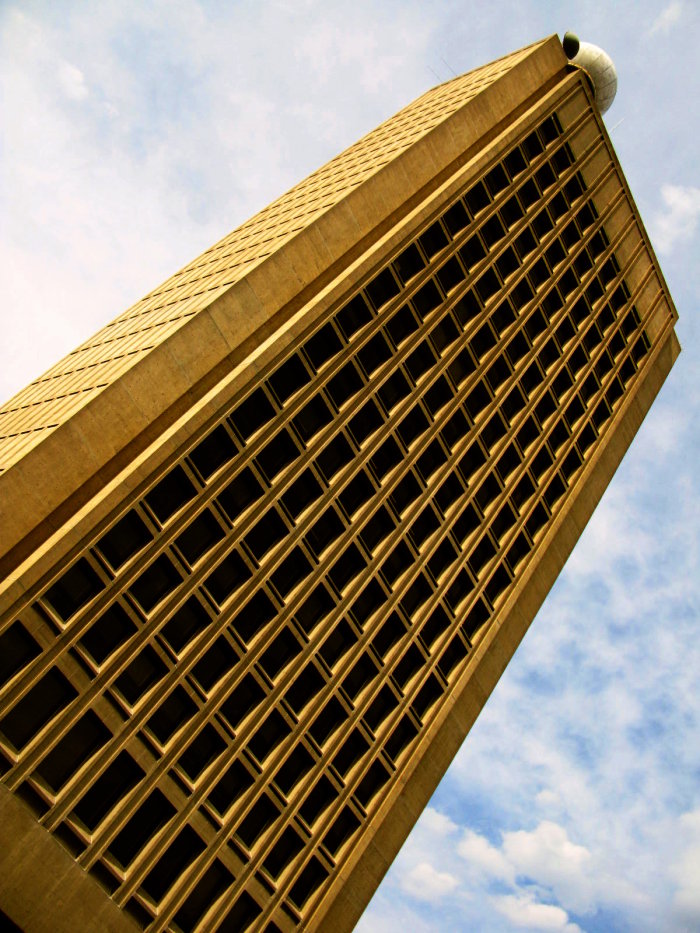 The geometry-defying Stata Center may be Euclid’s nightmare, but it’s a mind-blowing monster to wrestle with under your camera lens. I should have worn sunglasses, though. Smooth-brushed metal is really excellent at solving Maxwell’s equations. 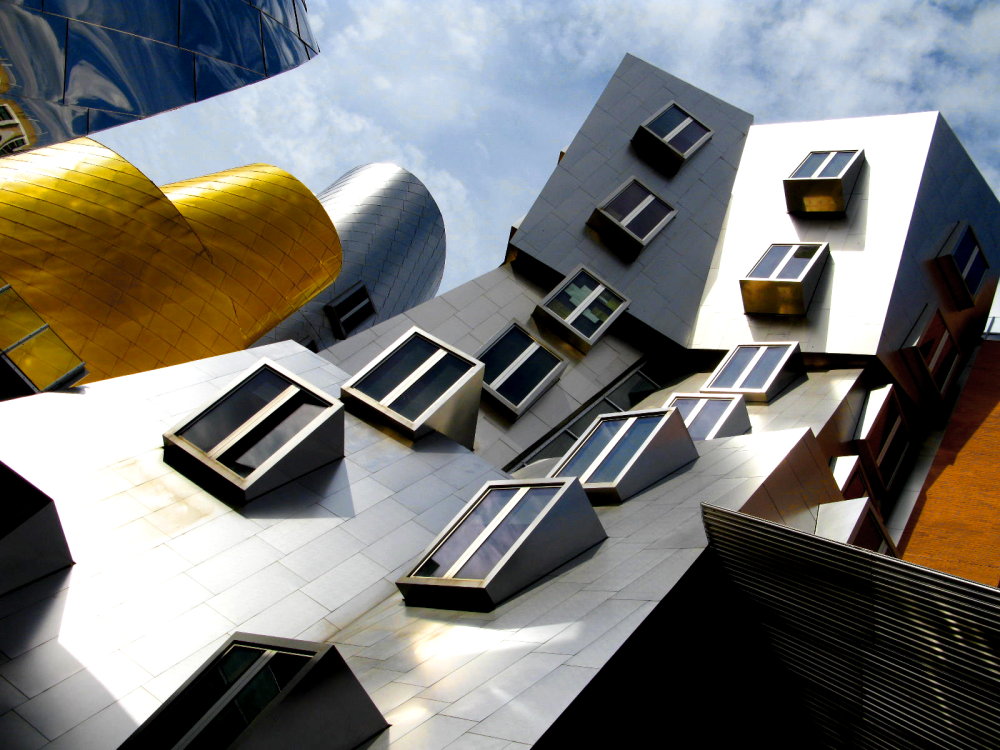 Certain portions of Stata’s exterior double as unusually sophisticated funhouse mirrors. Snapping these shots was like playing Twister with the act of photography. 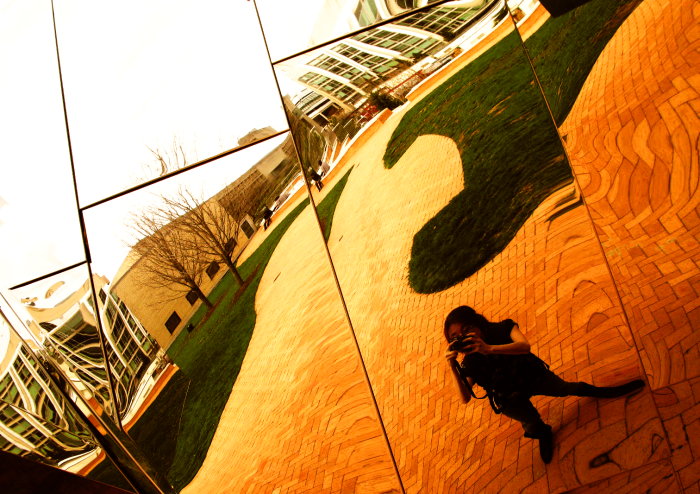 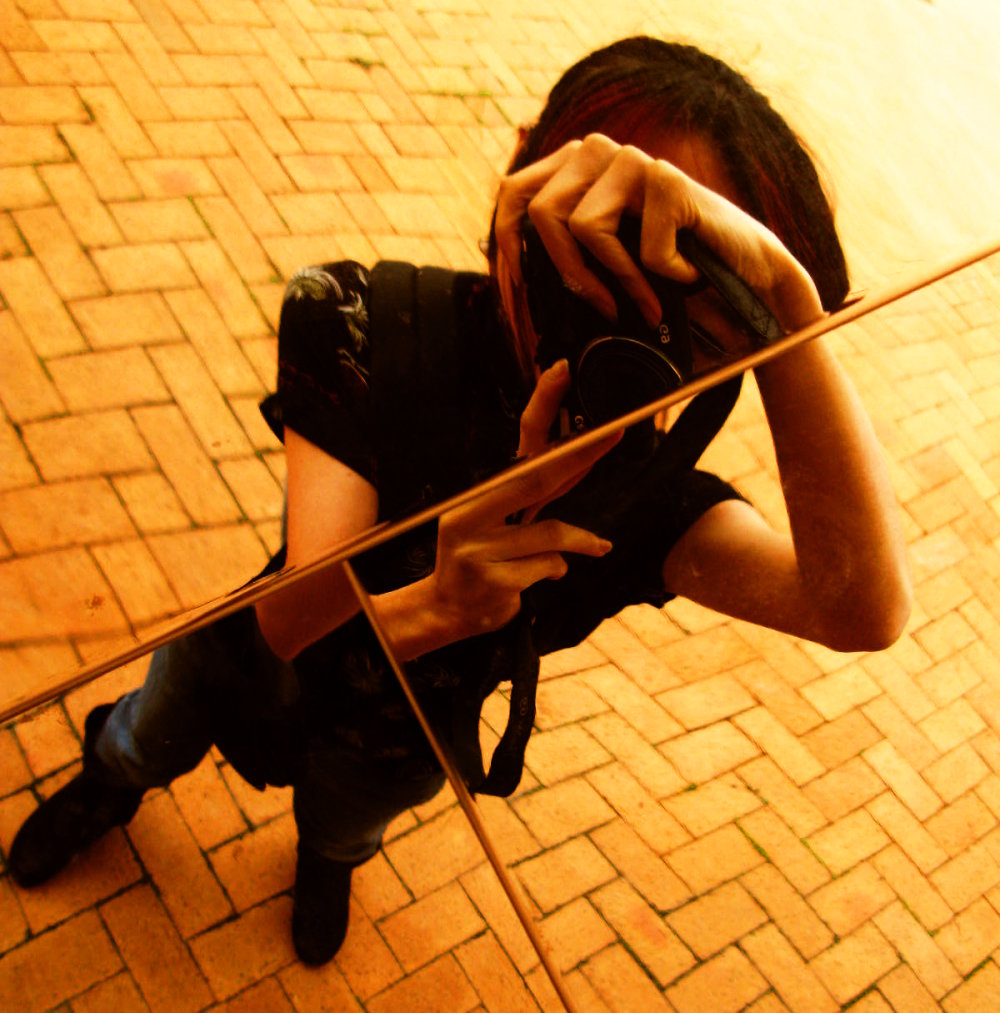 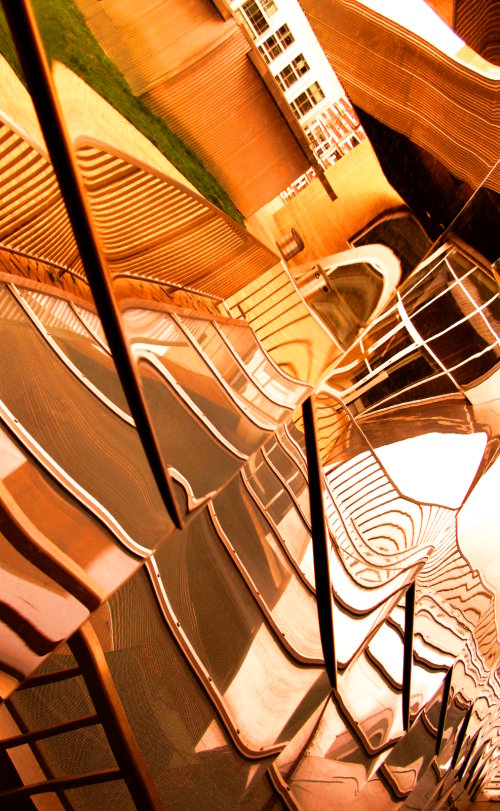 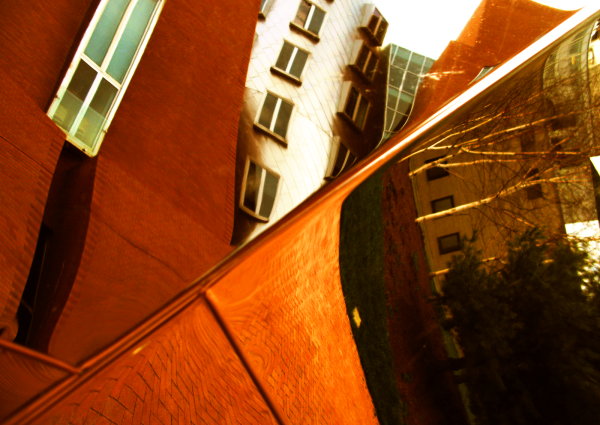 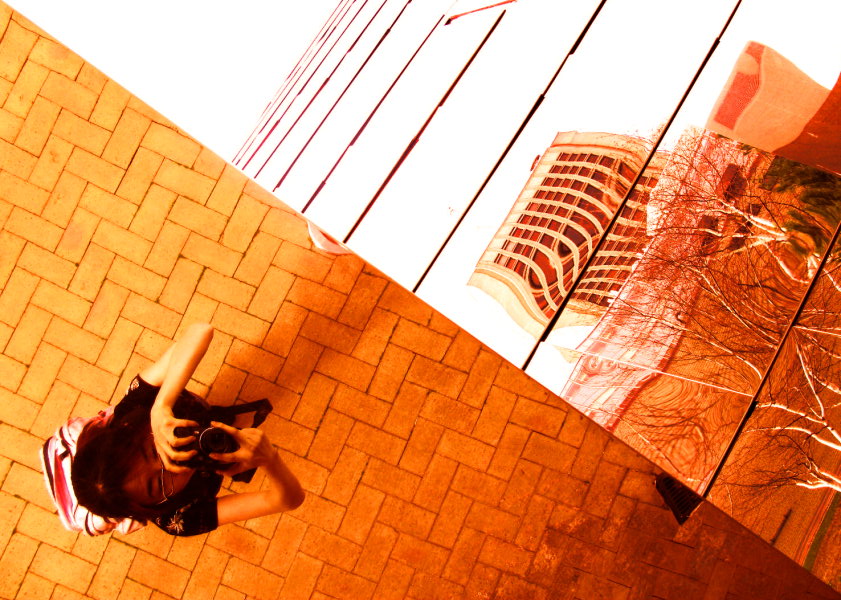 The aftermath: No less than four tourist groups stopped and mimicked me within the span of 30 minutes. As I left for my 4 pm class, a freshly-distracted camera-toting crowd was gathering ’round. 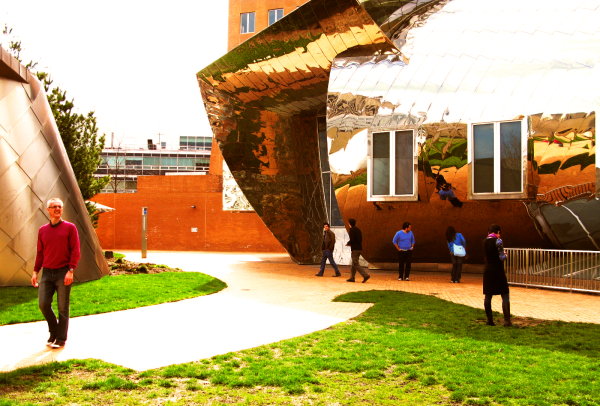 Follow-up to my previous post: I briefly alluded to pika, one of MIT’s uniquely awesome independent living groups. Here I will briefly allude to pika again, with photos no less.

Somebody asked: Is pika the only independent living group at MIT? What if I have to do a cooking duty and cannot physically understand how to make food edible?

Answer: Nope. Other independent living groups include WILG (women only), Epsilon Theta, Fenway House, and Student House (links at http://web.mit.edu/slp/involved/ilgs_contact.shtml). I highly suggest checking out MIT’s alternative housing options over CPW for a vivid glimpse of how students can fully transform their living environments to reflect their vibrant, irrepressible personalities.

As for cooking, pika is more than happy to match you with a Big Cook in case you’d like to help prepare dinner for 30+ people but don’t actually like having responsibilities. You’ll get to work with awesome cooks like Natania and Spang, both of whom appear as photogenic blurs on camera. 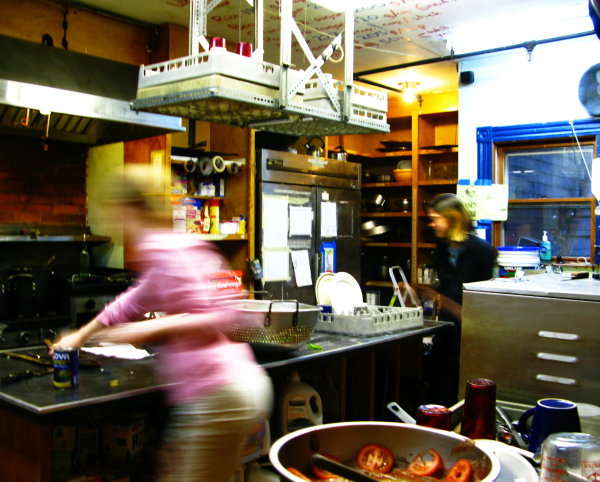 Or you could help Maita bake homemade bread loaves the size of small coffee tables. 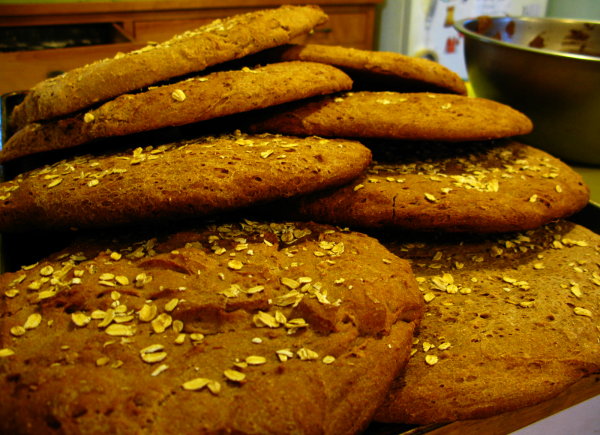 Which was righteously paired with black bean hummus, a richly-textured lentil pilaf, and a crunchy green salad. Basically springtime in a bowl. 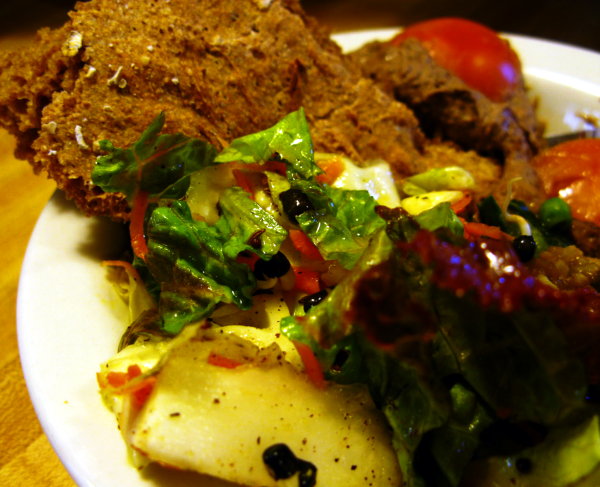 16 responses to “Eternal sunshine of the sleepless mind”