So, as I mentioned in my previous entry, my GEL classes don’t have p-sets and rarely have tests. Sweet, right? No homework sounds great! Aha! But I didn’t say there wasn’t any homework. Every week, several GEL students are assigned to lead activities during the Engineering Leadership Lab, and those students are assessed by members of the program (staff or GEL 2-Year students). The assessors fill out a “blue card” with feedback on the student’s performance as a leader. The assessed students then fill out a “yellow card” on their own time. 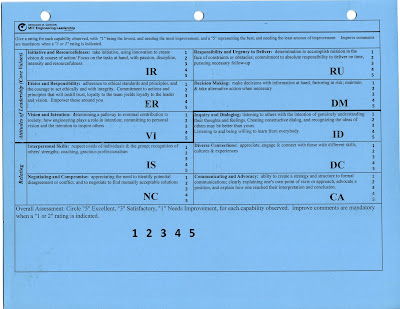 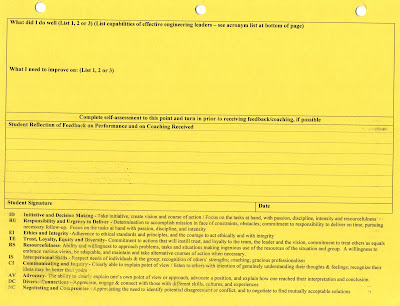 So, why go through all these variously colored cards? It’s all about feedback. Feedback and self-assessment are effective ways to track one’s progress in a leadership program, when you can’t really assign p-sets to test students’ understanding of the material.

But aren’t we getting maybe one card a month? How does that change anything? Yes, this requires the “little by little” argument, where I say that with each yellow card I fill out about myself, I learn just a little more than I did before about my role as a leader.

Not convinced? Well, here’s another situation where a little bit of encouragement went a long way.

The thing is, no matter how many times I told myself “this is just another race,” Regionals isn’t quite any ol’ race. You hear “Sandstorm,” “Shipping off to Boston,” and “Don’t Stop Believing” over the speakers. There are NCAA signs everywhere. But the biggest difference from other races? The people. So many people. 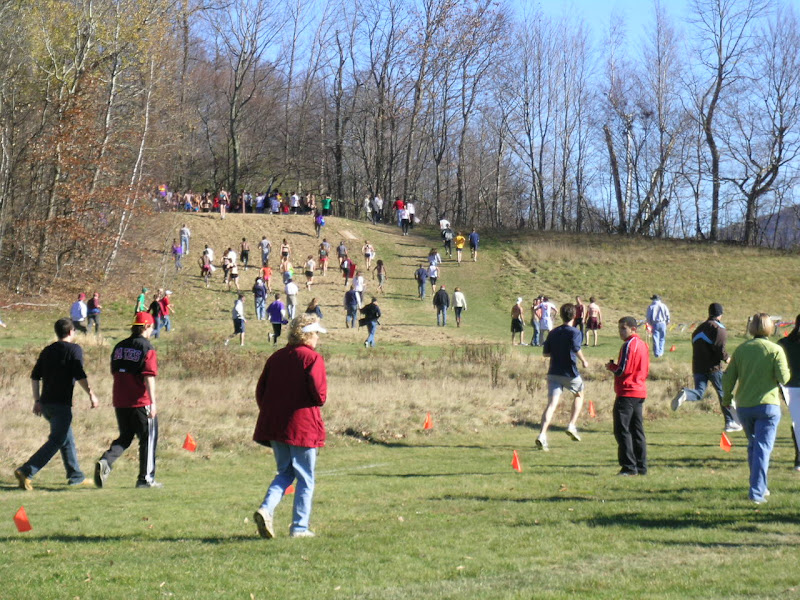 These people aren’t racers. They are the fans, and they probably do just as much running as the athletes they are cheering.
</font size=1>

It seems every team has its own cheering squad, and MIT is no exception. I had the pleasure of being one of the cheerers last year, and I ran around with a red “M” painted on my stomach like the Hester Prynne of Team Spirit yelling until my voice cracked and ringing my signature cowbell until I had to switch the grip between my frozen hands. 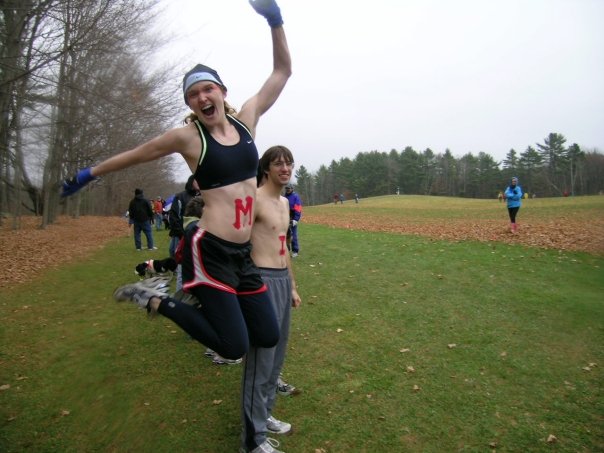 This year, our squad did not disappoint. They brought signs. (for the record, the first one spells out “ATACK ‘MM” as in “ATTACK ‘EM!” not “ATTACK, MM!” as I originally thought. Hey, attacking is delicious!) 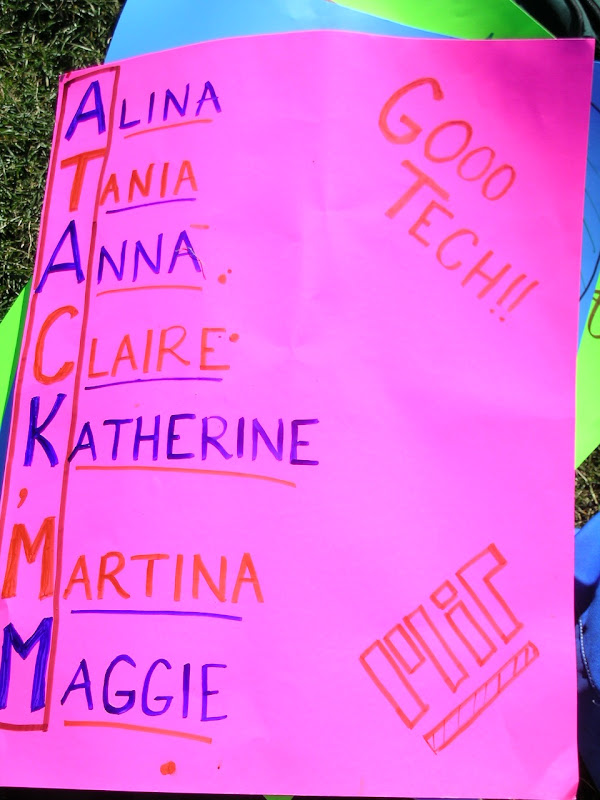 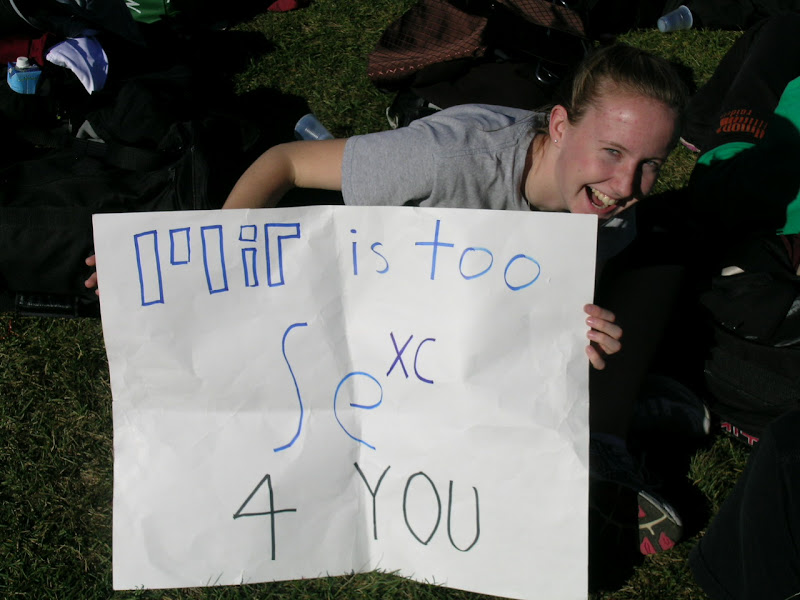 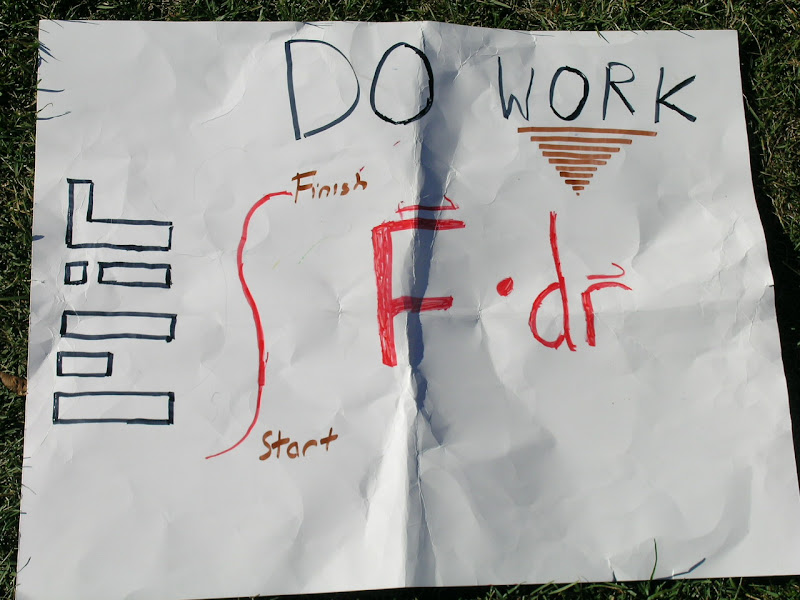 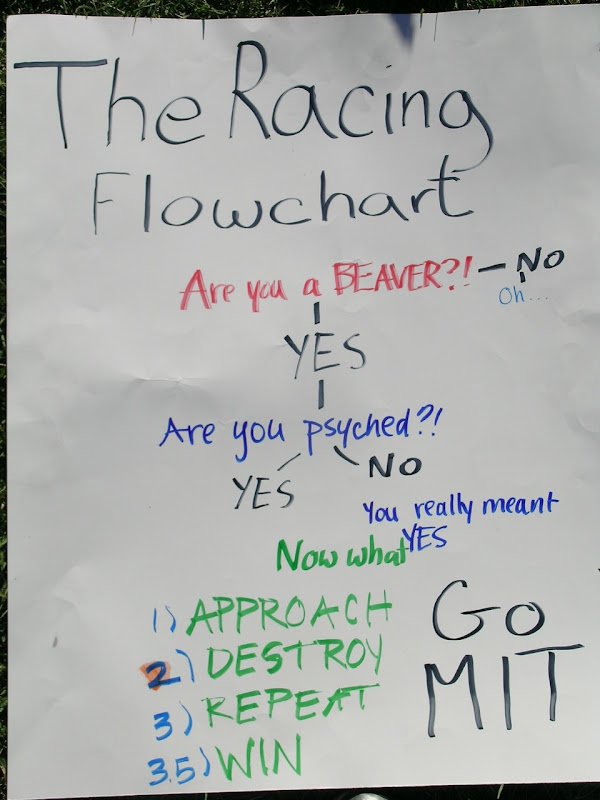 Just a sampling of the MIT-inspired signage. Sarah ’13 particularly enjoys the integral of e to the xc (abbreviation for Cross Country) slogan. Hmmm, flow charts seem to be the thing to do this season.
</font size=1>

Our support crew took the three-hour ride in a few crowded vans, waking up earlier than they probably would have liked to on a Saturday, all to support their teammates. 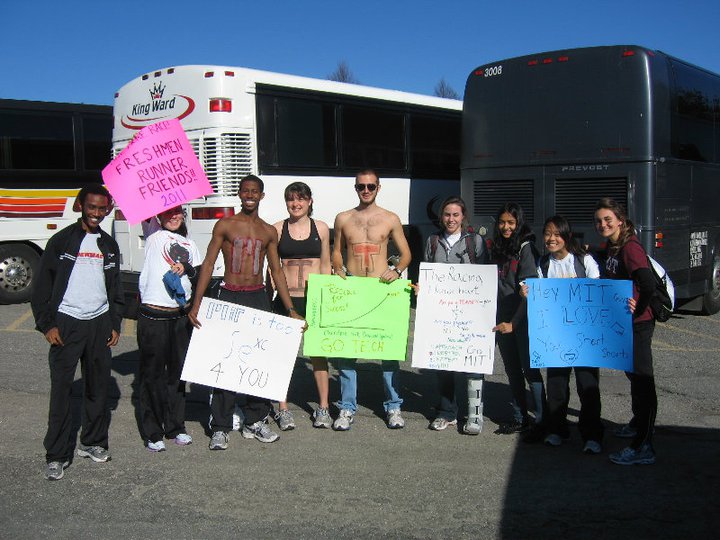 While I don’t remember many details about that day (even though it was just last weekend) it’s kind of hard to forget the feedback we runners got throughout the morning.

I’m standing at the starting line of the guys’ race, which at that moment has to be the most concentrated area of adrenaline in all of western Massachusetts. You hear team cheers (Tufts University’s “T-U-X-C!” tends to stand out because they have a massive support group, complete with gigantic flag). You hear coaches giving their last words of encouragement (“Now remember, guys…”). You hear teammates giving their last pep talks, which vary from “this is our last race of the season” or “first time at Regionals” to “this is my last race for Cross Country ever.” There’s a lot on the line.

And then, suddenly, all goes quiet. Like “All Quiet on the Western Massachusetts Front” quiet.

As the starter walks out in front of more than 300 athletes, everyone knows to shut up. Teams have cheered, coaches have made their statements and walked away, runners have grown still and now sort themselves along the single chalk line. 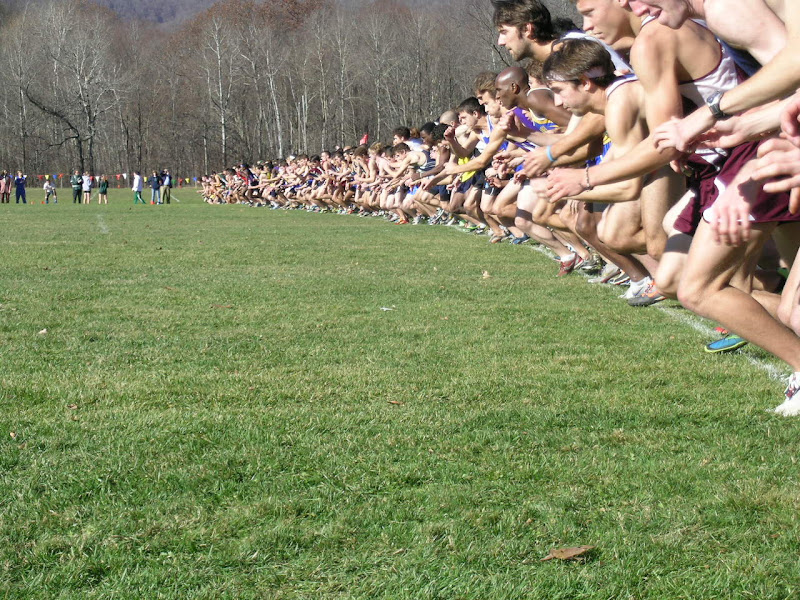 On race day, time doesn’t feel normal. What seems like two seconds later, I’m warming up with the women’s team.

At one point, the guys’ race goes by and I notice Paul’s REALLY close to the front. And then, woah, Roy’s up there too! And Dan! And there’s Stephen! And Gihan and Richard are coming up, too! And there goes Joe!

We knew. Something was happening.

The guys win a race that at the start they were ranked to be in 9th place. They were going to Nationals. The seniors get one more race after all.

Another “two seconds” go by, and I’m a little over a mile into my own race. 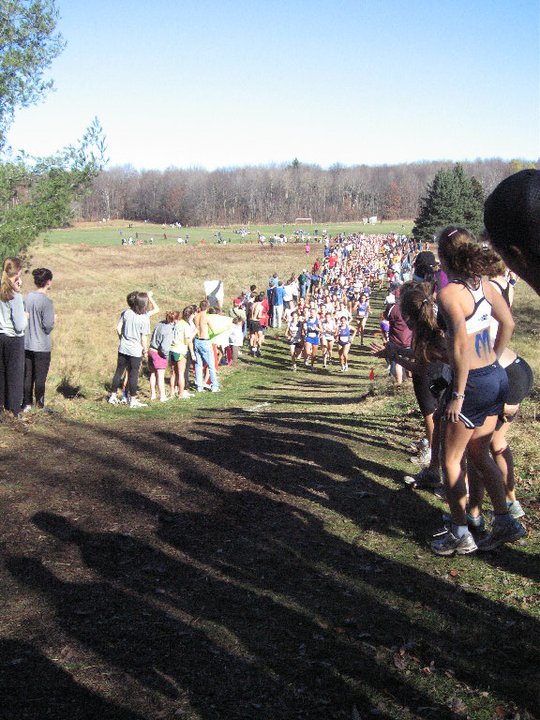 I’ve been in this mile for hours. But here and there, I can hear it: “M-I-T! M-I-T! M-I-T! GO MAGGIE! YOU’VE GOT THIS!” A blur of bare skin and red body paint. A neon poster-what does it say? Doesn’t matter, they’re just yelling for me to GO!-flashes by in a second. What seems like two hours later, I’m finishing.

The women get 4th, which doesn’t seem quite as glamorous when compared to the guys’ miracle 8-km race, but we still know that we raced our best. Plus, the women’s 4th place finish is good enough to qualify for Nationals in Iowa, so the team gets another chance, along with the guys, to race hard next weekend.

Anyway, had it not been for the cardinal and grey whirlwind tearing across fields and wilderness to get to the next best cheering spot, it would have been pretty difficult to convince ourselves to keep pushing the pace. Sure, we could hear the cheers for only a few seconds before we passed the MIT cheering squad, but this is a 6-km race. Add up all those strategically placed words of encouragement, and it’s really hard to forget why we’re racing.

The point is, feedback is important and meaningful. The results of feedback aren’t always immediately tangible (like in the weekly GEL ELLs), but can be extremely motivational (like at XC Regionals). To all those who were out there cheering, screaming, waving signs, and bearing body paint proudly: your feedback definitely worked.