body pillows are my love language

Last summer, three of my friends and I rented an apartment in Central Square, Cambridge, about a mile from MIT. It was a convenient 8-10 minute walk to get groceries from Target, Hmart, or Daily Table, or to grab a latte from Caffe Nero. My internship was remote, so I often worked at Caffe Nero and did groceries during my lunch break to stretch out my legs.

During one of my routine lunch break Target runs, I noticed that a bunch of fuzzy body pillows had been recently added to the shelves, including some patterned with mangos and oranges. To quote Eren ’23, body pillows can be sold “at normal people stores […] without the anime girl on it” and are “not just like waifu things.” I didn’t have enough hands to haul a body pillow along with my groceries back, so I left without it.

I was probably supposed to be thinking about Pytorch and graph networks, but my lizard brain could not stop thinking about mango orange body pillows for the rest of the work day. My cat’s name is Mango, and I also love oranges. I missed cuddling with my soft fuzzy cat, so it would be nice to cuddle with a soft fuzzy pillow that reminded me of him. After making dinner that evening, I returned to Target to retrieve my beloved. Someone yelled “nice pillow!” at me as I traversed the streets of Central Square with my beloved slung over my shoulder. 10/10, probably my favorite purchase of the summer.

This semester, I am living on the third floor of the east parallel⁠01 East Campus is a dorm split into two buildings, the east and west parallels. They are connected via underground tunnels. Neither of them have elevators. of East Campus, aka Tetazoo. Tetazoo is not a hivemind.⁠02 TETAZOO IS NOT A HIVEMIND Tetazoo however does have a bunch of wonderful traditions, such as a cursed version of Secret Santa that we call Sekkrit Satan. The premise is the similar in that everyone is assigned to someone else to anonymously send a personalized gift. There’s a twist: the gift should poke fun (in a harmless, friendly way) at a specific interest, personality trait, habit, etc of the recipient.

Tetazoa would often organize large Domino’s orders to save on delivery fees, but my recipient Andy ‘24 has a particular fondness for Papa John’s pizza. Or at least knows about Papa John’s controversies to an absurd level of detail. Around that time, I was putting together an Ikea order for some random household items. Andy happened to be around when I was looking for people interested in adding to my order and asked to add three plushies, a body pillow, and two body pillow covers. Since he was already getting a body pillow for himself, I decided to order an extra body pillow cover to adorn with Papa John’s million dollar smile for his gift: 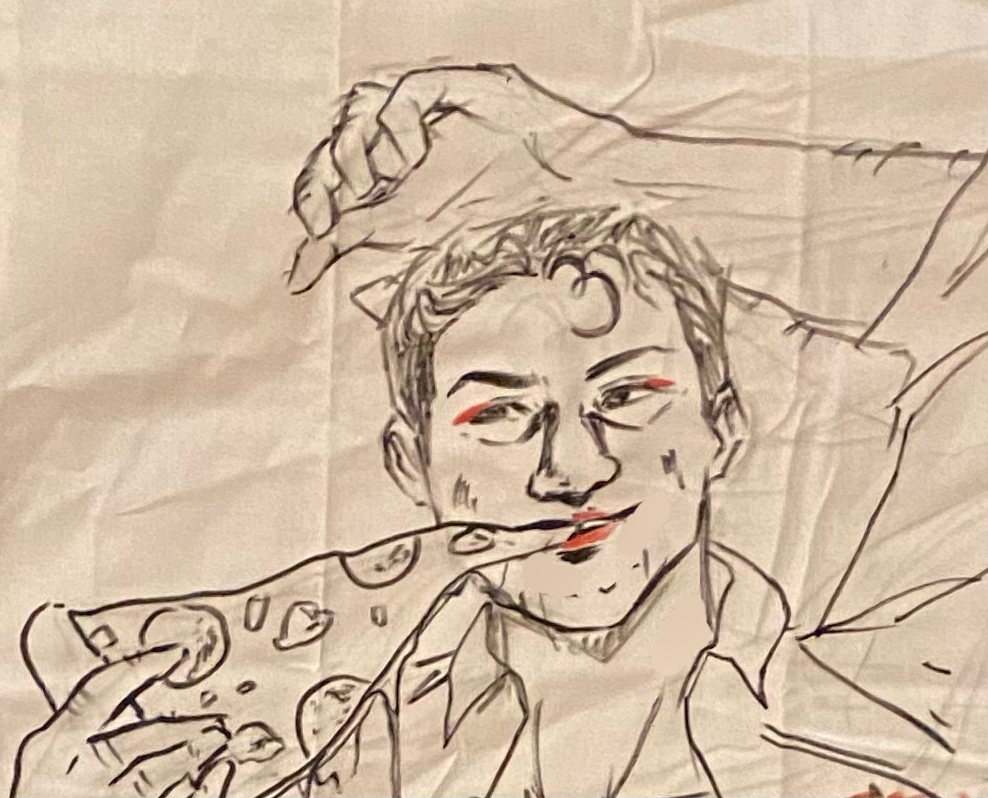 The rest of Papa John has been left as an exercise to the reader.

Apparently everyone was supposed to write a jokingly mean letter to their recipient that gets read aloud during the gift exchange, but I was knocked out by the covid booster shot when those instructions went out. So instead I had written a way too wholesome note telling Andy that he’s nice and friendly, which elicited groans from everyone. Oops. Besides that, the Sekkrit Satan gift exchange was a holly jolly night. Some other gifts included the recipient’s face painted on a ceiling tile (which was later put back into the ceiling, face and all), an exit sign that lit up in a multitude of colors, and a finely crafted wooden toolbox full of less finely crafted wooden tools. My Sekkrit Satan gave me a pastry in the shape of feet. It was delicious.

The east parallel of East Campus is vertically split into three sections: Walcott, Bemis, and Goodale. The Walcott lounge aka Walounge⁠03 pronounced wall-lounge, kinda like waluigi is in Walcott, and the Goodale lounge aka Glounge⁠04 canonical pronunciation is gee-lounge, or you can also say guhlounge to tick off the traditionalists is in Goodale. Tetazoo’s Walounge is the chill lounge full of plushies, fuzzy blankets, and cuddles, while Glounge is the louder lounge complete with an electronics maker station and notable for the infamous “update: tetazoo glounge.”

Walounge! There is a lot to take in here. On the left is Tetazoo's squanch, a little dude shaped like a clothes hanger. Under the Squanch mural is the Shrub, the thing with a bunch of branches poking out of it. During Sekkrit Satan, gifts were placed around and under the lovely Shrub.
update: tetazoo glounge

While I was putting together my Ikea order, Rihn ‘23 suggested getting an extra body pillow and (plain, personless) cover for Walounge. 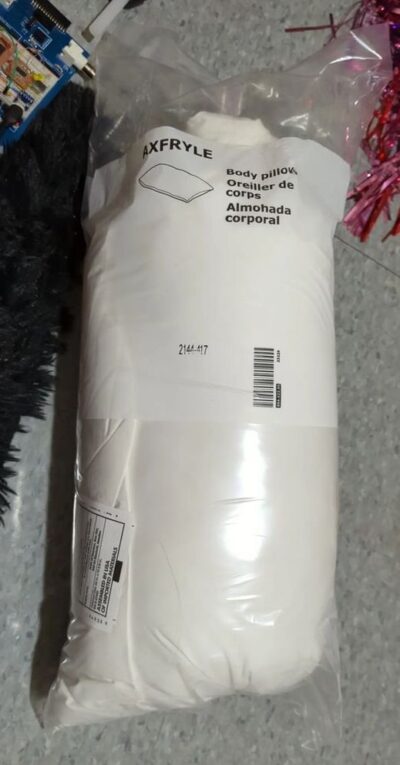 AXFRYLE still in its packaging

Apparently if we got enough approval from Tetazoa, hall funds could be used to cover the cost of the pillow + cover. So we gathered some hall signatures: 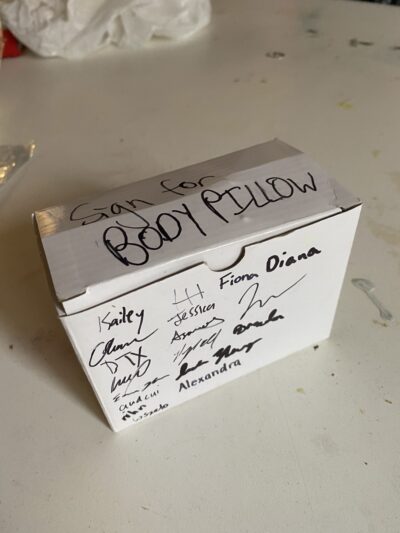 just look at that overwhelming support <3

I would’ve put the body pillow + cover out in Walounge before leaving for winter break, but I had to use the cover for a last minute gift. So Walounge will hopefully get its covered body pillow once I return for IAP.

Let’s just say that my friend Jess ‘24 is very enthusiastic about playing the character Fischl from Genshin Impact. Because the Papa John pillow turned out pretty nicely, I wanted to give her a body pillow + cover with Fischl drawn on it as a holiday gift. So I bought a body pillow from Target and Amazon’ed a cover because Target didn’t have any. Unfortunately, the cover’s shipping got delayed to after Jess’s flight, so I drew on the Walounge pillow cover instead. 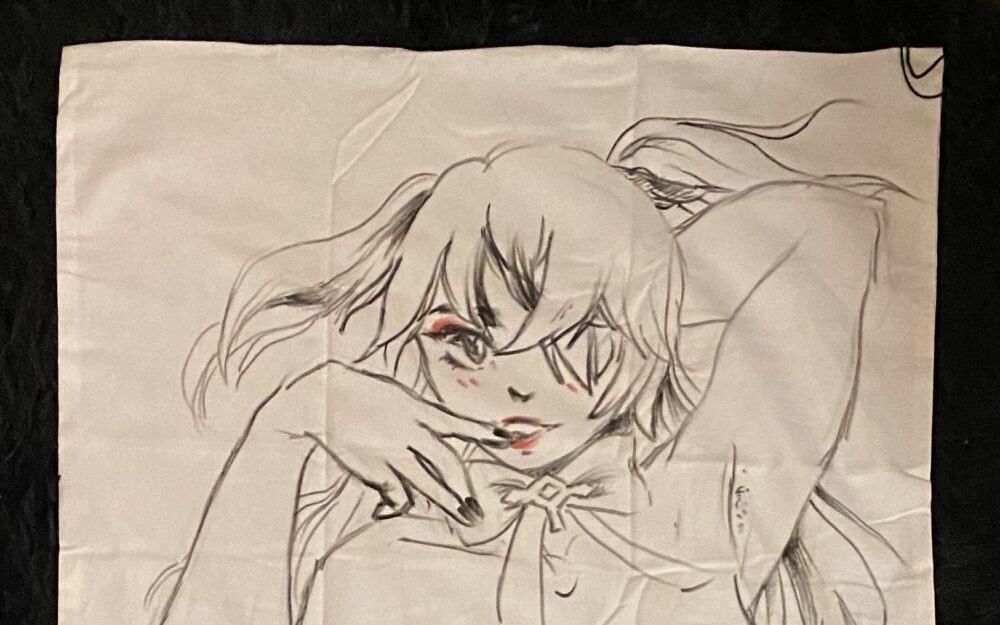 Upon delivery to the recipient, I was bonked on the head with said body pillow multiple times. I’ll take that as positive feedback.

I have been told that a lot of money can be made⁠05 'i'll refer you to some genshin simps if i get a solid commission' - jess in the custom body pillow industry. However, for me most of the joy is in seeing the recipient’s reaction, so I don’t know if I’ll ever take up body pillow customization as a career. Nevertheless, it is my great privilege and honor to post a blog dedicated to body pillows on an Institute sanctioned platform.