i think i have achieved a state where i feel like i should be blogging more and yet don’t want to spend my free time blogging more. like, i’ve already squeezed out so much free time out of my week. i am in class 3 hours a day, and then also doing a load of things outside of class. also i’m spending my free time playing a lot of monster train. actually that’s the main thing like i bought monster train last monday and now i’ve clocked over fifteen hours in the game oops. anyway, here’s a small post about mailing list culture in mit.

in my experience, people in mit really really love email. leading up to mit you get a handful of emails about orientation and things you need to do before that and stuff. and then you come to mit, you add yourself onto lists, and then you get a deluge of emails, much like drinking from a firehose.

a mailing list is like a group chat for emails. as the name suggests, it’s a list of emails that an email can get sent to. so for example, a list like [email protected] can have the emails of alyssa and ben. and then an email sent to [email protected] would go to alyssa, ben, and any other emails on the mailing list. so mailing lists are a convenient way to email a group of people.

there are lots of cool mailing lists that mit has. petey talked about the reuse and free food lists, and yes, they are both awesome and useful. but this post is dedicated to the social mailing list, the kind of mailing list that’s created specifically so that people can talk about random things.

these social lists can range from small to large. i know some people have small personal mailing lists for themselves and their friends, and they send updates about their lives and talk about things, kind of like a small, private blog. one of the personal lists i’m on was run by faraz m ’21. faraz sent funny and interesting articles to the list, and every wednesday morning faraz would send the it is wednesday my dudes meme with an inspirational quote.

around the time when we got kicked out of campus, a poster went up on one of the bulletin boards along the infinite with the wednesday frog. i like to think of this as a tribute to faraz’s mailing list, and the wednesday morning emails being one of the few constant comforts during that difficult time. 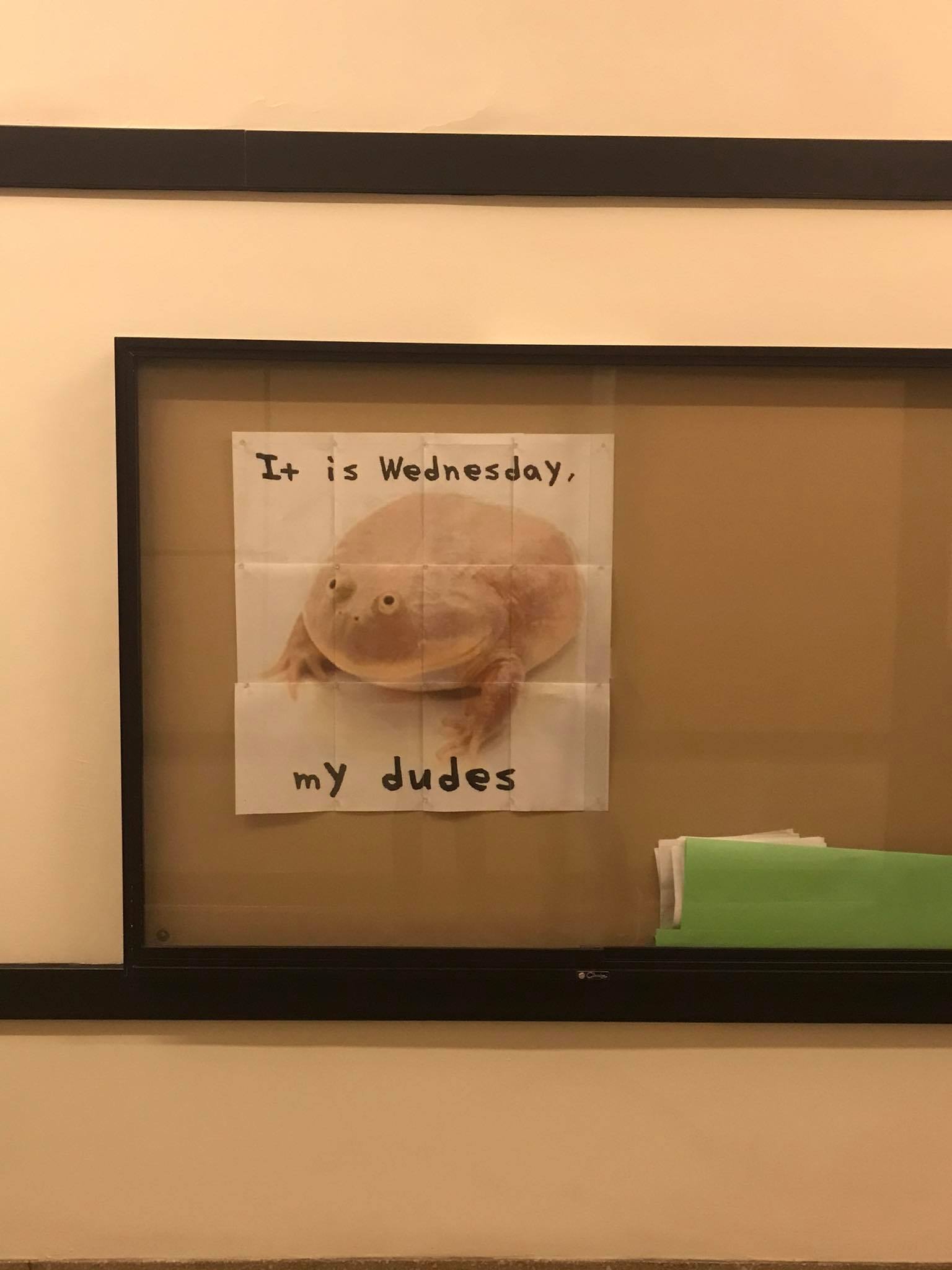 it is wednesday my dudes

that poster was initially put up some time in march 2020. it’s still up. it goes to show how much a single mailing list can mean so much to a lot of people, and i think it’s a testament of how powerful mailing list culture is here in mit.

many of mit’s clubs also have social mailing lists. i’ve talked previously about esp, and we have our own collection of social lists that get memes sent to them. one social list i’m on is specifically dedicated to people in esp who own thinkpads, and from time to time it gets sent a thinkpad meme. 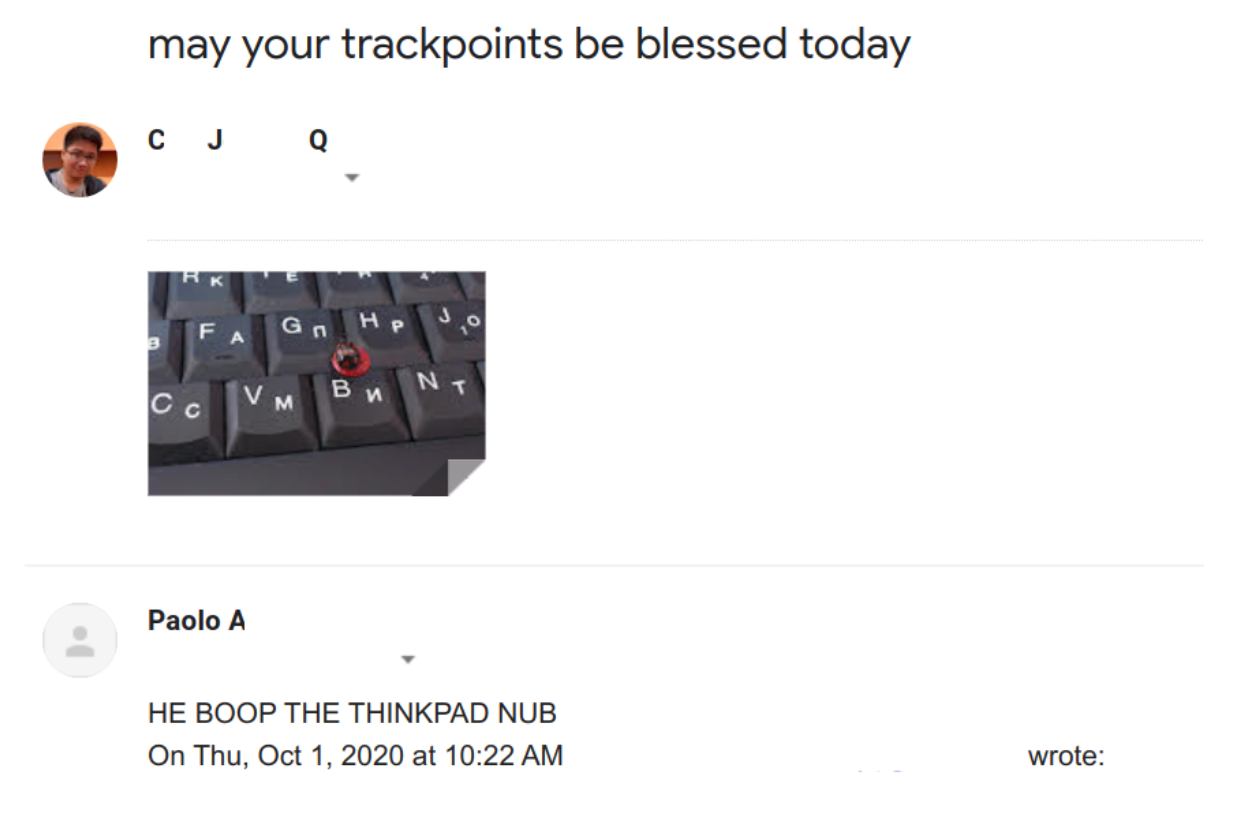 the picture is from /r/thinkpad

on an even larger scale, we have dorms. each of mit’s dorms has several mailing lists. there’s one for official announcements about the dorm, one to reach the house team and area directors, one to reach, say, all the medlinks in a dorm, and lots, lots, lots more others, for different purposes, depending on the dorm. but every dorm has a general discussion list. and these dorm mailing lists are incubators of culture:

speaking of dorms! all the dorms in mit have subunits. burton conner has floors, east campus has halls, next has wings, macgregor has entries, etc. these subunits have outings and eat together and do events together. many of these subunits have well-defined cultures, and with that, lots and lots of mailing lists built around these cultures.

i live in floorpi, which i’ve talked about a lot. we also love mailing lists, and we’ve built a bit of our own email culture:

i can also talk a little bit about the mailing lists for some other ec halls. putz, the hall below floorpi, has these things called important putz polls, which floorpi imported ipps from. in a recent discussion (on a mailing list, of course), danny bd ’15 talked about how it originated in december 2014, and then shortly thereafter got sent to the general ec mailing list, and thus spread to other halls.

ipp is now the acronym used to mark any sort of poll sent to the ec discussion list, and it got adopted by people in ec so much that there was recently an ipp asking what “ipp” meant. this seemed to be a genuine question from some people new to ec who don’t know the story, and it fascinates me how this small piece of culture has persisted over a few years, long enough that the people who originated it have graduated. so yeah, this blog post is also partly inspired by that happening.

for this next bit of story, we’ll need some more context. since a lot of people are on their dorm’s discussion list, a good way to advertise an event is to send it to all of them. this is known as dormspam, which is both a noun (“got lots of dormspam today”, “are you on dormspam?”) and a verb (“we need to dormspam our event”).

dormspam is simultaneously one of the best and worst things about mit. it’s awesome in the sense that so many events are dormspammed! when i was a first-year, dormspam was one of the big ways i explored mit’s myriads of student groups. lots of cool opportunities get dormspammed, ranging from free food to random surveys to studies looking for participants to try out exoskeletons.

but dormspam is also kinda inconvenient, especially when it’s not done correctly. that’s why over the years, some important conventions about dormspam formed. paolo a ’21 discussed these when he wrote about dormspam-the-game; in the linked post, it’s under the section “dolla dolla bills”.

one relevant bit is that when you dormspam, you bcc the mailing lists, so people replying don’t reply to everyone. another relevant bit is that you add the phrase “bcc’d to dorms” somewhere. that way, people know it’s dormspam and can ignore it, or use gmail filters to move those emails to a separate folder.

and when these rules get broken… strange things happen. this is a story that i’ve heard told lots of times, with lots of different versions; i’m basing this retelling from danny bd ’15.

the year is 2013 or 2014. tetazoo, which is ec’s third east hall, routinely generated flamewar spam to ec’s general discussion list. now tetazoo has their own discussion list, and they’d announce when they’d watch movies with short emails, like an email with just the subject “frozen in walounge eom”. to the uninitiated, this may seem like a cryptic email, but: 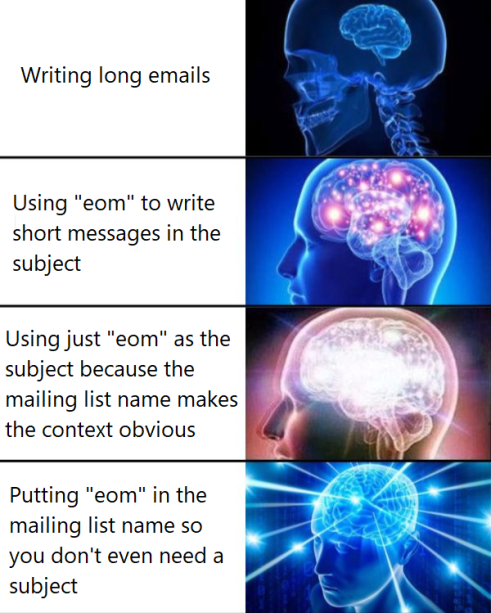 meme my friend made

now tetazoo watched frozen a lot, enough that “frozen in walounge eom” spawned in-jokes and references, like “frozen outside walounge eom” when someone was locked out of walcott during the winter and needed to be let in. this is again one of those references that spread to other halls, “frozen outside” becoming a snowclone that persists until today.

but this is not about frozen. this was to set up the stage for when, in late september 2017, an email was sent to tetazoo’s mailing list. it was a blank email with the subject line “Where are you all EOM”, sent seven in the evening. people started replying with their locations, like “I’m in walounge right now”. it was a pretty active email thread, with a new email every five minutes or something.

later, ec’s general discussion list got looped into the thread, with someone on putz sending their location. and it picked up even more replies, at a faster rate. briefer responses. the moniker now became “tetazoo walounge”, “tetazoo glounge”, to differentiate the lounge from the four other walounges and glounges in ec’s east parallel.

not everyone was pleased with the spam from this thread, which was similar to dormspam in that it went to all the dormspam emails, but did not have “bcc’d to dorms” or “for bc-talk” so that people could filter it out. some people quietly updated their filters and moved on with their lives. but some, of course, decided to feed the flames of the thread.

another bit of mailing list culture, that i think may have originated at around this time, was people replying “unsubscribe” to a long, spammy thread. whether it’s in a genuine attempt to unsubscribe or baiting other people to reply with “unsubscribe” to further spam the thread is unclear, but the in-joke still persists today.

anyway, jack continued writing to the thread every morning, for months, even when jack clearly could not have been in glounge. and it continued. every once in a while a new thread with “Where are you all EOM” as the subject line would get sent, with replies from jack every morning, “update: tetazoo glounge”. it continued, even, for years, even after jack graduated. every morning, consistently.

it’s reputed that jack never used a bot to send these emails, manually typing them up and clicking send every morning. it can be annoying, and honestly, maybe there were better ways to have gone about it. but i like to think of it as a nice, comforting constant, that i can rest in the knowledge that jack is out there, somewhere, sending an email every morning. he could be in the opposite side of the world, but i want to believe that some part of jack is always in glounge, always hanging out with other people and having fun. 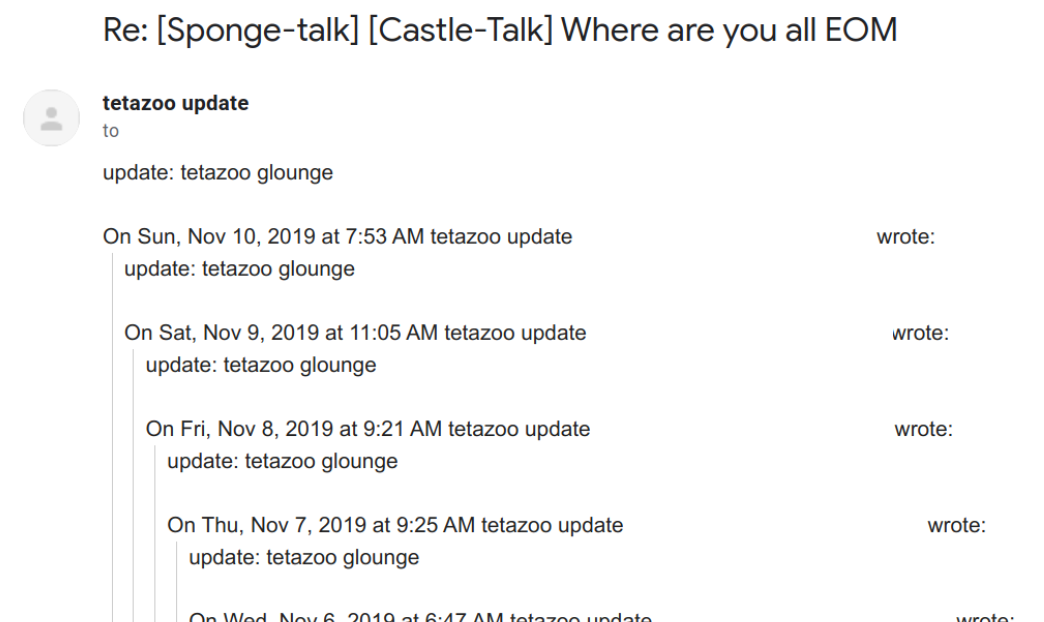 these updates still existed when i first came into mit. waly n ’24 wrote about it in his post about emails. i guess that’s also one of the reasons i’m writing this post, because wow this is such an important bit of culture that should not go unrecorded.

the emails ended a few months ago. there might’ve been a brief time when someone else tried to restart the thread, with an “update: tetazoo glounge” every morning, but that didn’t continue. the legendary thread still lives on in mit culture, whether as a warning to first-year students to set up email filters, or as an injoke to start a flame war.

these bits of mailing list culture, whether it’s the wednesday frog or underwear for bc-talk or tetazoo glounge, feel like such an integral part of mit culture to me, the kind that’s hard to capture in a blog post. and although in-jokes and memes might be ephemeral, i’m hoping to do my part by recording these ones that i value.

years from now, someone will look at the “update: tetazoo glounge” sticker on my laptop, and ask me what it means. and i’ll tell them about mit, its mailing lists, and its dozens of bits of culture, that i’ll carry with me long after i’m gone. 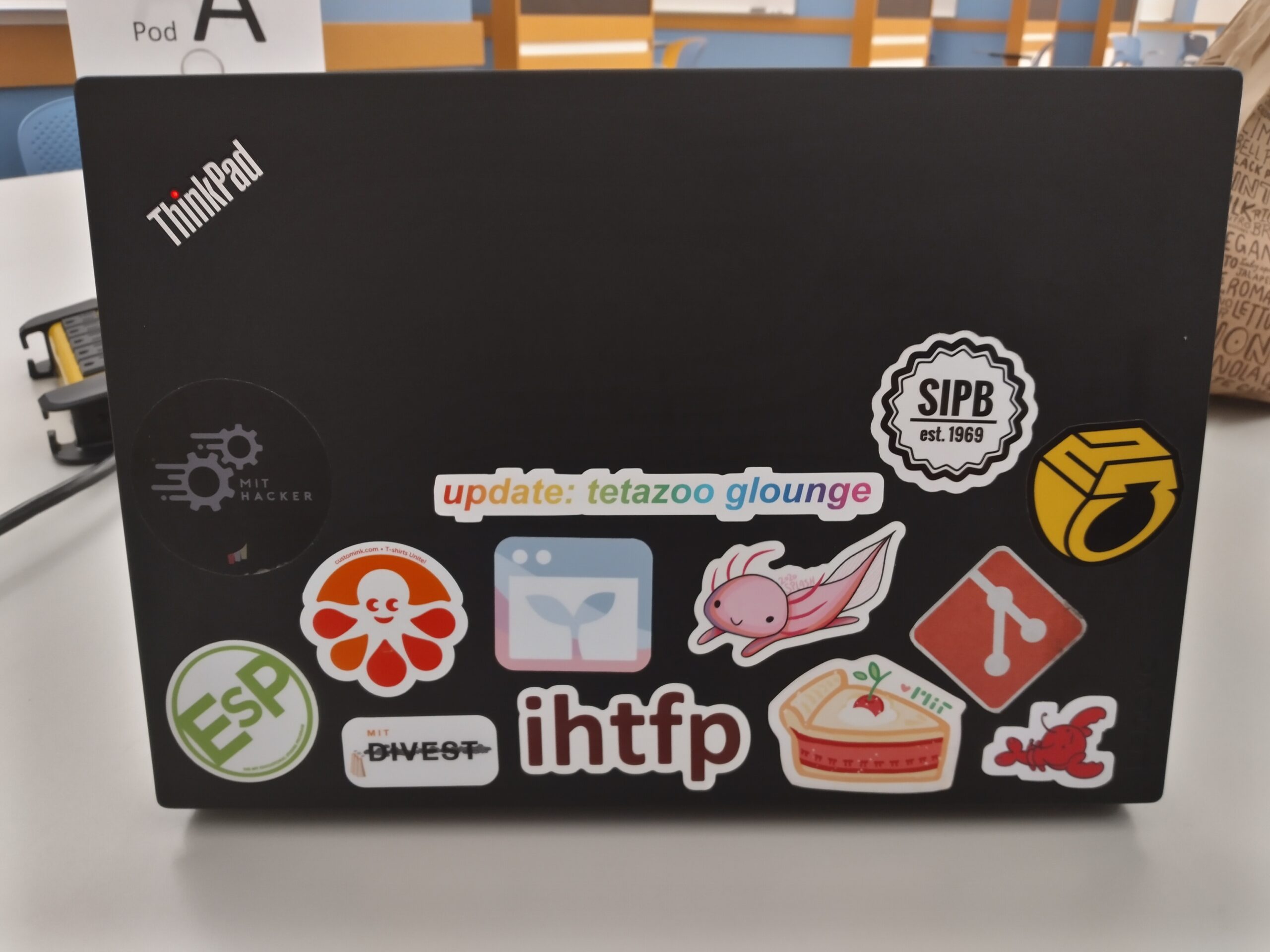 maybe ill talk about the other stickers some other time