in which i wear an exoskeleton

I’m currently dealing with writer’s block, to be honest, and I’ve been blocked on finishing some post ideas for several weeks now. So instead, let me talk about some of the things I’ve been doing in the past month, and maybe this’ll inspire me to write more.

A new laptop. I got a new laptop! It’s a beautiful lightly-used ThinkPad T470 that I got off of eBay. I’ve been wanting to replace my laptop since at least the spring, which was when my old laptop, a ThinkPad E560, started becoming inadequate for my needs. And also when its spacebar and Enter key broke, so it became mostly unusable without an external keyboard.

I started hunting for a new laptop around the end of July, following the advice in the excellent Used ThinkPad Buyer’s Guide. The new laptop has a faster processor, which was the main thing I was looking for, but it also had four times the RAM, which is neat too. It’s also way lighter and feels nicer to carry around. And I got it for about the same price I got my old laptop. So that’s nice. 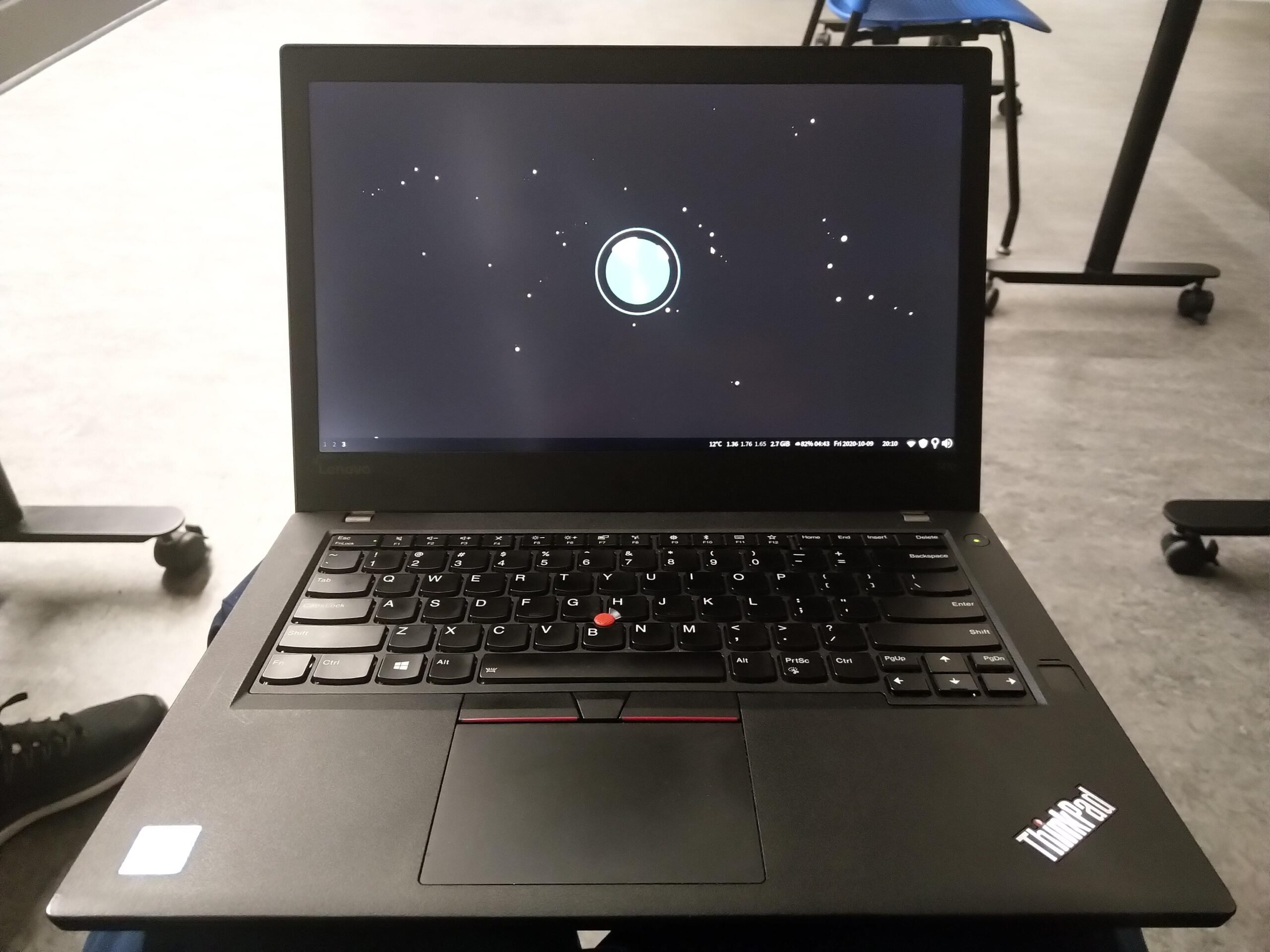 I also finally decided to switch to Linux. I used to avoid switching to Linux in fear for becoming a “tech person”, but to be honest, I’m too far gone in that direction to turn back. Of course, then I had to decide which Linux distribution to use; different distros could be as different as Windows and macOS! My friends pulled me in several different directions, with their reasoning being:

After long self-reflection, I picked Manjaro, a distro based on Arch. I wanted the glory of the AUR, but I’m not cool enough to use Arch, which is one of the big reasons I chose it. I then made the very important decision of what to name the computer. 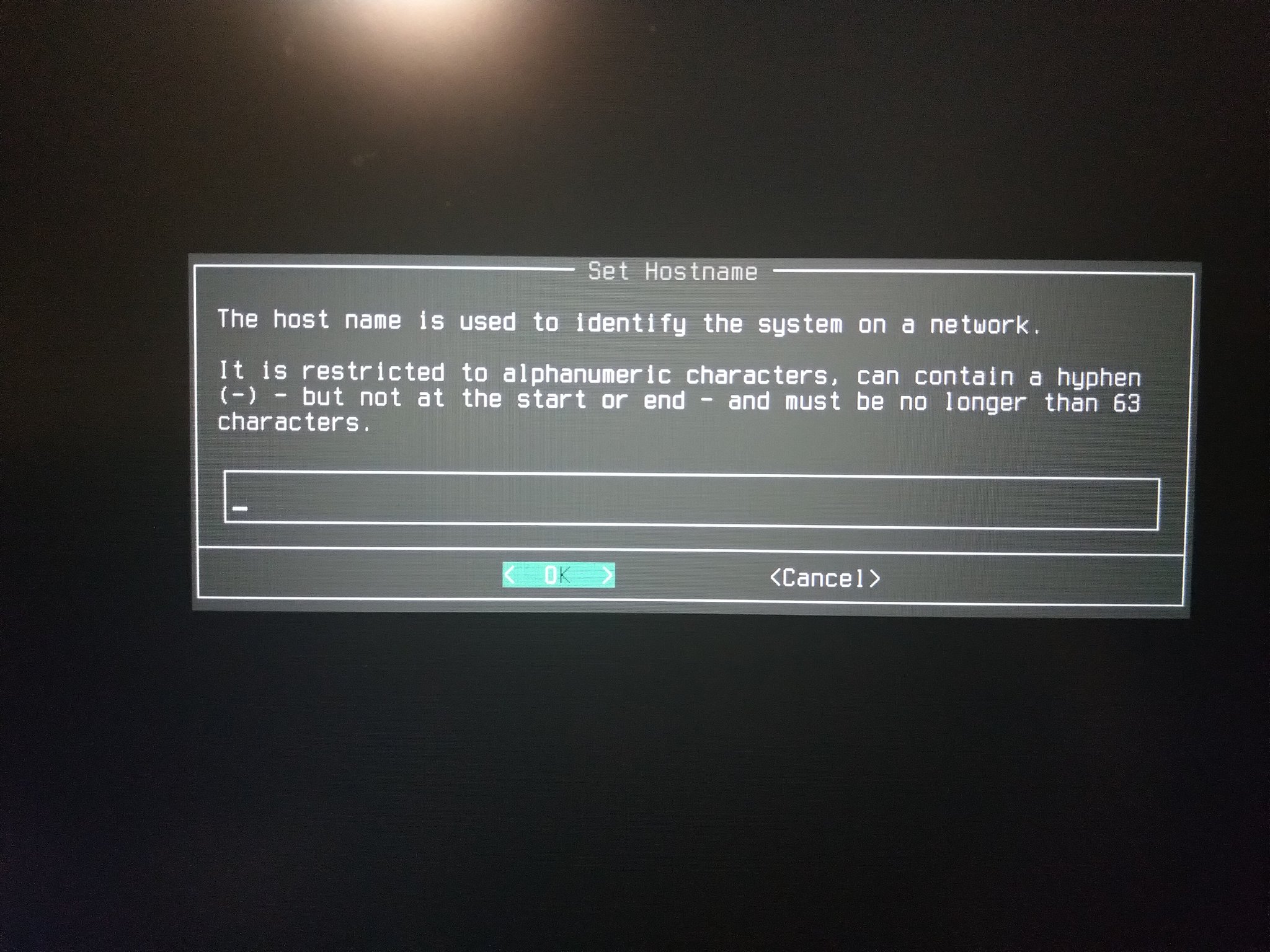 This was a very difficult decision that took me thirty minutes in a Zoom call asking people for suggestions, because choosing computer names is important business. The shortlist included helium, ichigo, and flamingo. In the end, I named it rusty, after one of my favorite bands, Rusty Machines. I think that was a great decision and I’m very happy I named it that.

Now that I’m a month into using Manjaro after using Windows for pretty much my entire life, I like it. It was somewhat of a pain getting everything set up at first, since this is my first Linux system and I was learning a lot of things along the way. But I actually appreciate getting a deeper understanding of how the system works, and appreciate the freedom I have to customize pretty much everything.

Other new things. Although I do not often given in to the clutches of capitalism, I lowkey enjoy it when I do. I got a new pair of shoes, since my old shoes were tearing at the seams, and new bedsheets, because my old one had a huge hole beginning to form. I should probably get better at replacing broken things before they become very broken.

For swim class, I bought a very cheap pair of trunks. We were also given goggles, and swimming with goggles is such a different experience than swimming without them. I also got some new clothes, my favorite of which are these yellow shorts. I’m trying to get more into color blocking, and I like wearing silly bright colors. 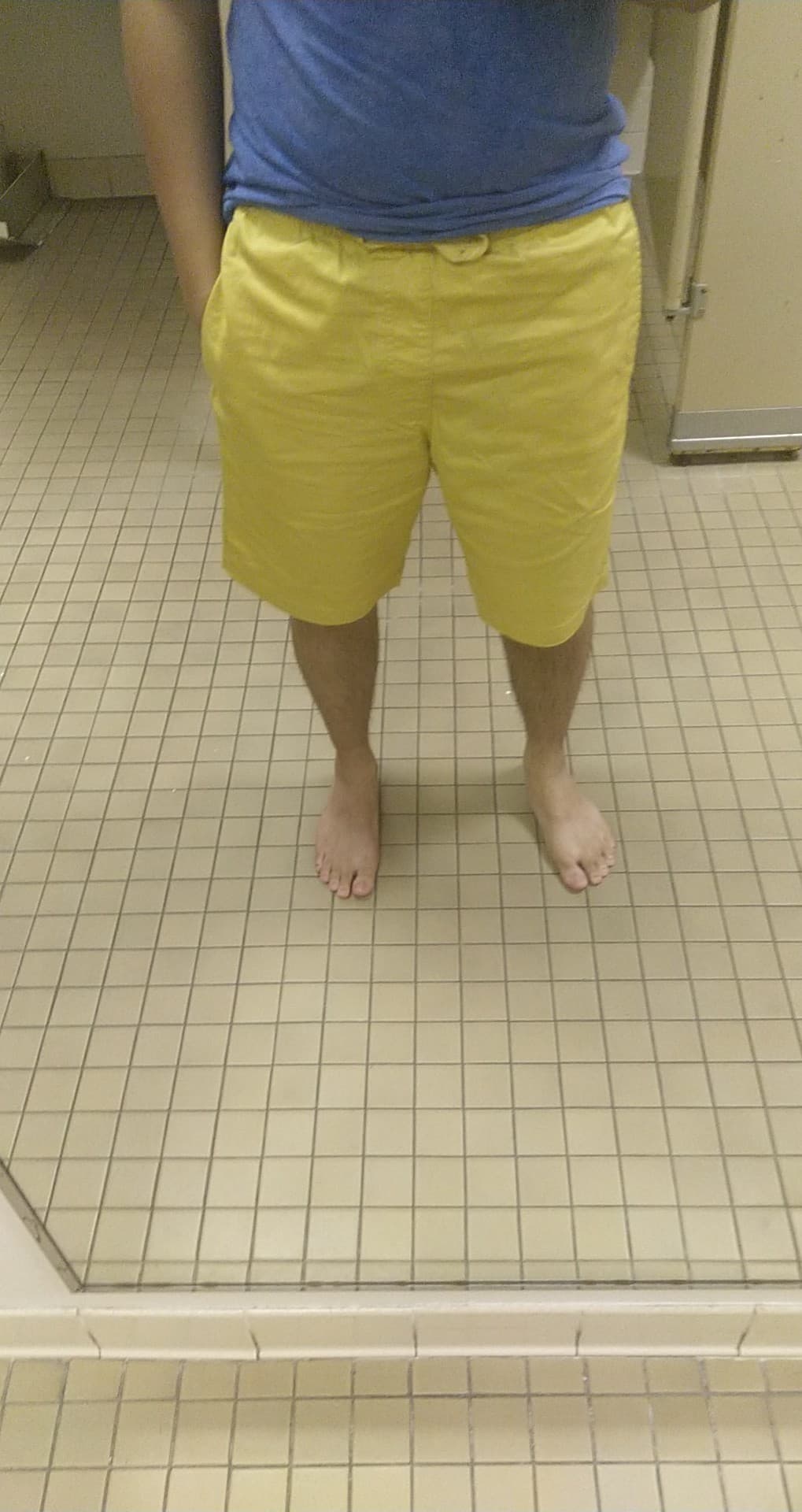 Surprises in the mail. I get a bunch of things shipped to me that I don’t expect. They’re either surprise gifts, or things that I don’t remember ordering, which I guess are also surprise gifts but to myself. One of these things is a shark plushie, who is becoming good friends with Ice Bear. I got it as a gift from the lovely people in ESP, for co-directing Summer HSSP this year, which was themed around sharks. They don’t have a name yet, so if you have ideas you should comment them. 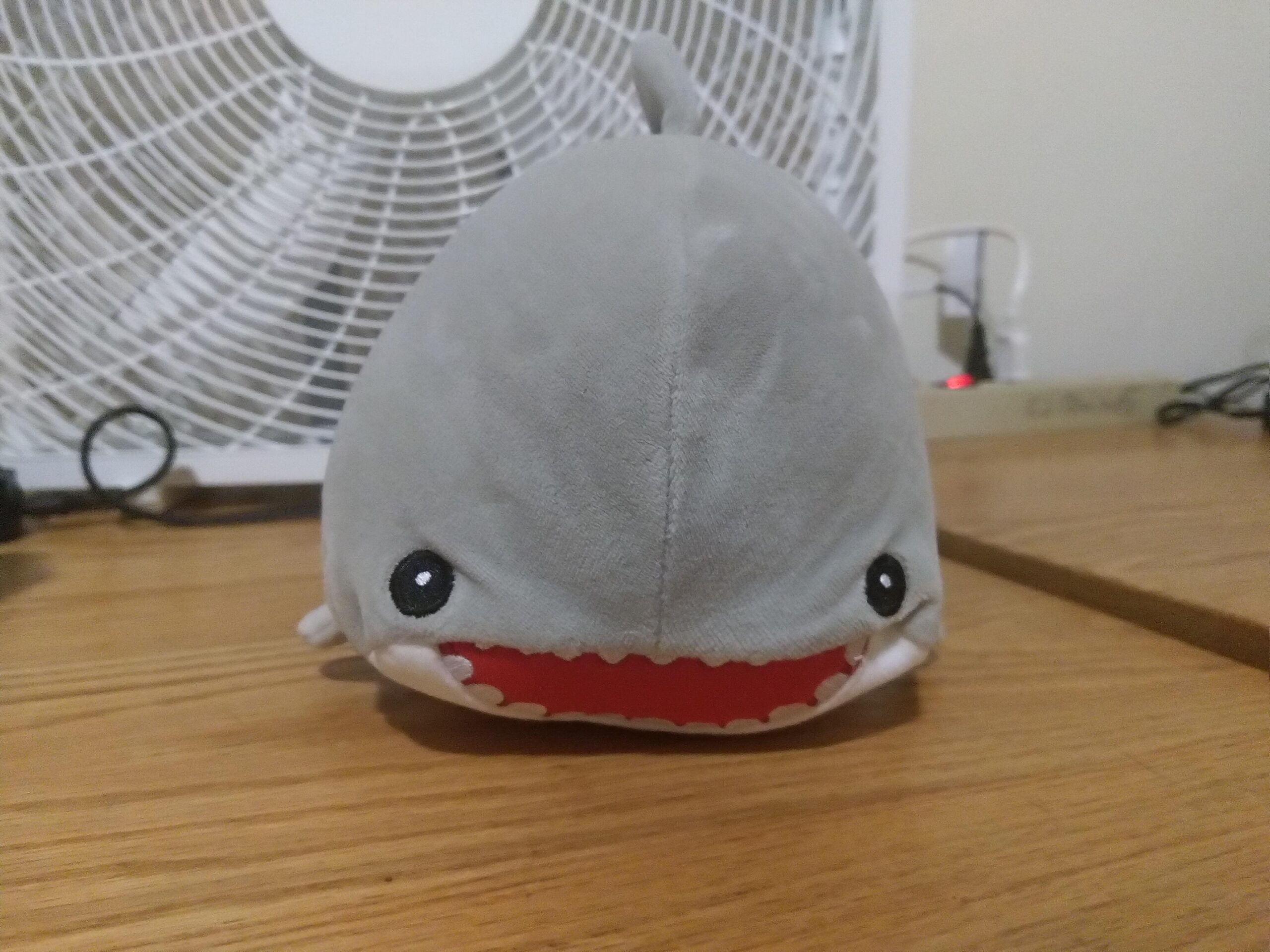 Another surprise I got in the mail was Book One of Saga, a comic book series. I started reading Saga around April, as I got the first 6 chapters as part of this Humble Bundle I purchased. True to its name, it’s an epic space fantasy, and despite appearances, it’s actually themed around parenting.

I was delighted to find out that MIT Libraries has Books 1 to 3, each Book being a compilation of 18 chapters. And I was further delighted to find out that they were delivering books to people staying on-campus! So I borrowed Book 1, totally forgot that I borrowed it, and then got it a few days later and was pleasantly surprised. That’s one of the nice things about being on-campus.

One of the things that amuses me about it is that one extraterrestrial race speaks Esperanto, a language I happen to speak. I didn’t know about this at all until I read it, so it was a neat surprise. It’s clunky at times, and it’s probably Google Translated, but it’s understandable. It’s so satisfying whenever there’s a series of panels in Esperanto and I just understand what they’re talking about without having to look it up. Is this what power feels like? 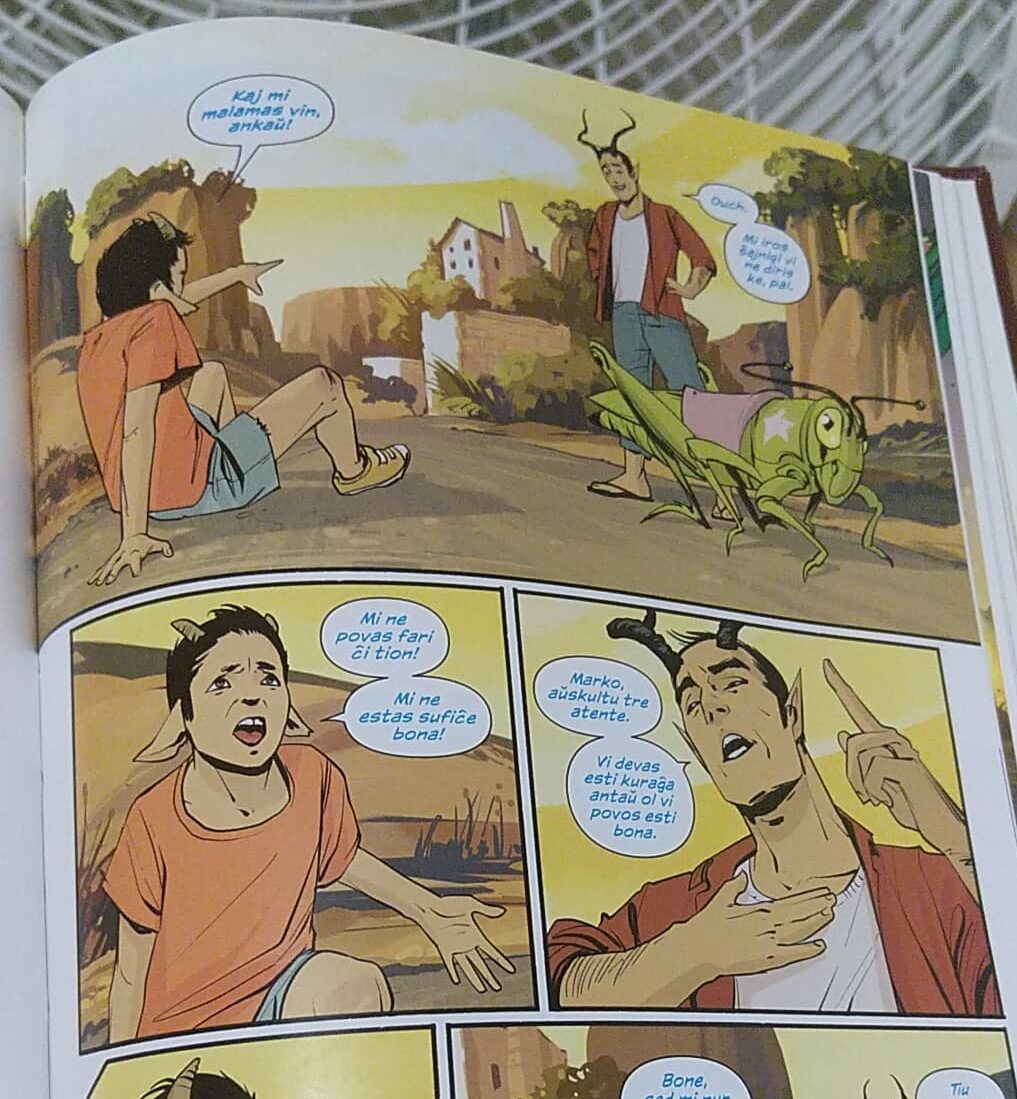 this is fair use right

[The SON, sitting on the ground, points at his FATHER.]

SON: And I hate you too!

FATHER: Marko, listen very carefully. You must be brave before you can be good.

There are lots of things I love about it: the diversity of its characters, the scale of the plot, the amazing art, the depth of the worldbuilding, its treatment of war. It’s an excellent series, easily in the top three comics I’ve ever read, and I strongly recommend it. (But do note that it gets pretty graphic at times.)

Classes. Miraculously, I am surviving in the swim class. I remember, back when I was in high school, reading A Hard MIT Class by Vincent A. ’17, and I felt this spiritual connection in absolutely hating swimming.

Now that I’m re-reading the post, I could’ve sworn I ghostwrote it. My instructor told us our goals were to learn swimming and to “socialize”, emphasized the importance of “rhythmic breathing” and gave me such glowing reassurances, all things Vincent writes about too. I also deeply relate to looking around and seeing everyone so stellar at swimming back and forth, when I couldn’t even swim halfway through the pool.

One of the classes I’m actually enjoying this semester is 24.902 Introduction to Syntax, taught by Pesetsky. He’s the same professor who taught 24.900 when I took it last semester, 24.900 being the intro linguistics class. For the first few weeks, he’d mention that class a lot: “Many of you might’ve seen this in 24.900,” or “For those of you who took 24.900 with me last spring,” and it’s amusing to count how many times he mentions it per class. I believe last Thursday was the first class when that count was 0.

Although the swim class is hard in the sense that I am making negative progress in learning how to swim, the hardest class I’m taking this semester has to be 6.854 Advanced Algorithms. 854 is a graduate-level class notorious for being difficult and time-consuming, and indeed, it’s by far the hardest class I’ve taken in my life.

On one hand, it’s sometimes frustrating to go over material again and again, and it’s frustrating to struggle for hours on a pset problem. But on the other hand, there are lots of things about the class I like. For example, the material is really interesting, and in lecture last Wednesday Karger offered some nice physical intuition for linear programming. And it’s really rewarding to get a problem after thinking about it for so long. 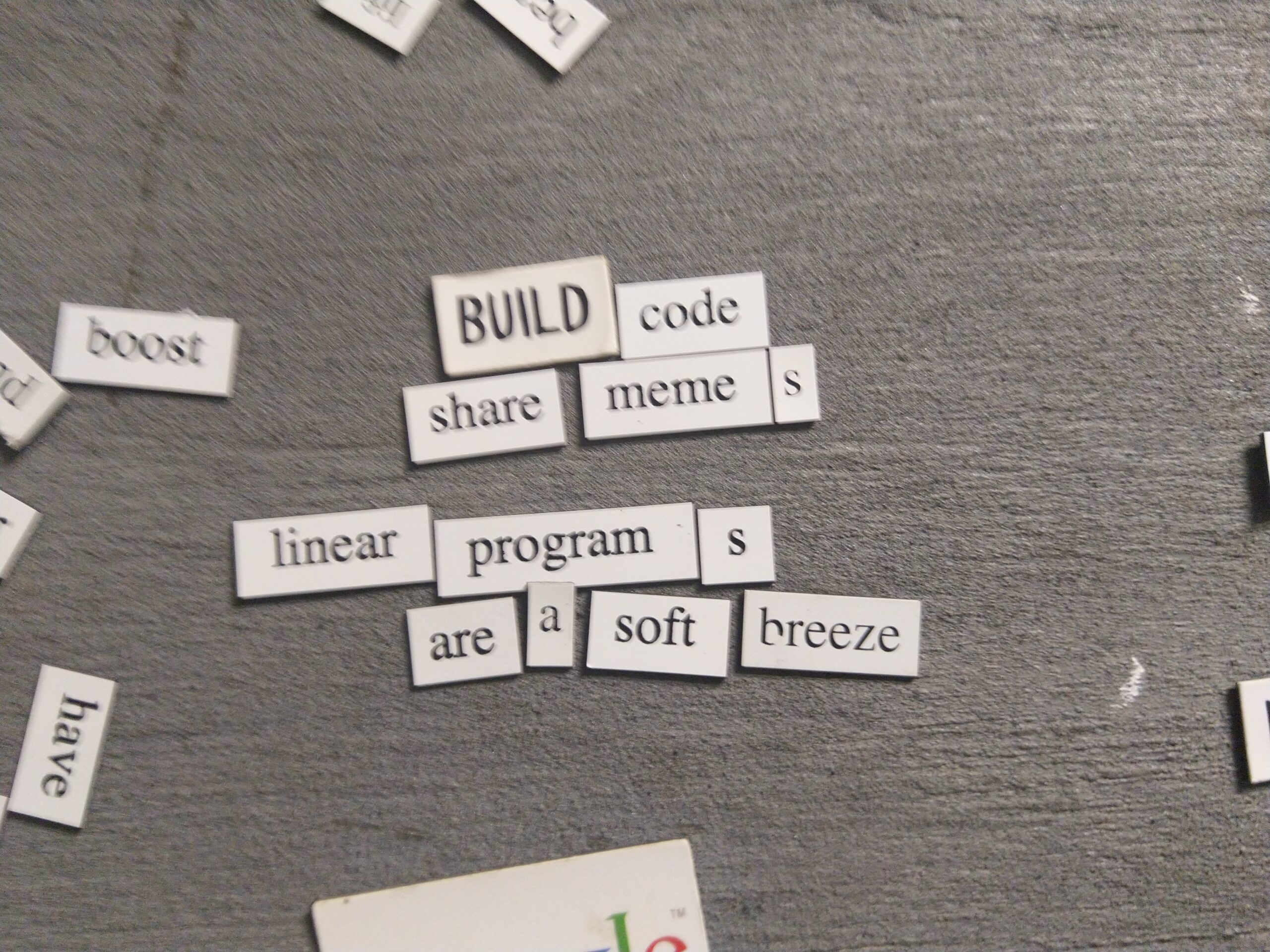 Karger is also a fountain of amusing quotes:

History. I did a little digging in old course catalogs. I might end up doing a longer post about it later, but mostly I looked up how long some classes have been around. Karger has been teaching 6.854, for example, for at least twenty years, because the class appears in the 2000–01 course catalog with him listed as the professor: 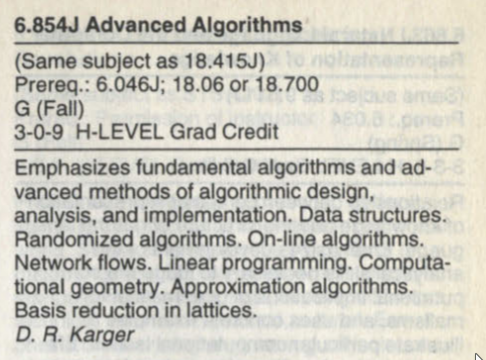 I only realized how long ago this was when my adviser told me about how he took 6.854 under Karger when he was a grad student in MIT, which must have been ten years ago. Even longer ago, in the 1970–71 catalog, is 18.701, with Artin listed as the professor. That’s fifty years ago. It boggles my mind how I took 18.701 with Artin last fall and how he’s teaching 18.702 in the spring. I probably have professors who have professors who’ve been taught by Artin.

There’s lots more interesting things from the archives that I’ve discovered, but I guess I’ll save these for the post that I’m planning to write. Whenever I get around to writing it, of course, which at this rate will probably be two years from now.

Wearing an exoskeleton. I saved the coolest part for last. Today I got to wear an ankle exoskeleton, and I walked around in it for around an hour. 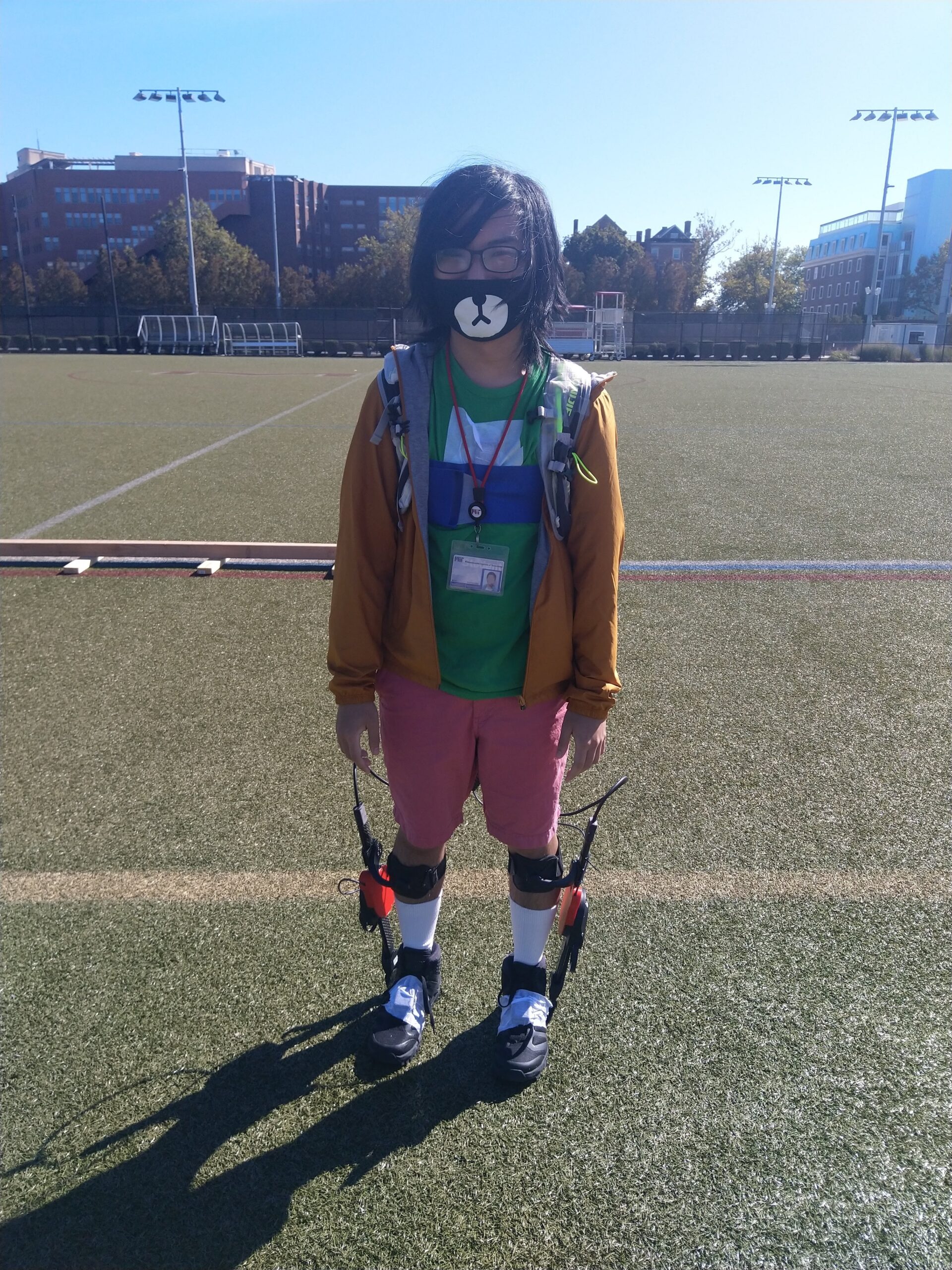 i look ridiculous but who cares

It was really interesting walking around while the exoskeleton was powered. After a couple of normal steps, I felt it tighten and loosen around my toes, felt it pushing the area beneath my knees, and felt it supporting my ankles as I was moving. And it was neat hearing the quiet whirring sound and feeling my foot being raised and lowered kinda autonomously. It made me feel like an android while walking around, and it was pretty fun.

Sarah was pretty nice and wanted me to say that if you’re on campus you should sign up for their study, so I’m saying that now. The whole thing took a little less than two hours. I got paid $20 for it, but honestly, I would’ve done it for free.

It’s a reminder that even if everything’s online and no one’s around, I’m still studying in MIT. It reminded me of that sense of wonder I got when I first walked through the hallways of East Campus and stared at the murals and the doors and the lounges. People all around me are doing cool stuff, whether it’s working with exoskeletons or cooking food or giving flu shots, and that’s one of the reasons I fell in love with MIT in the first place.