Freedom costs a buck-oh-five by Mollie B. '06

Question: What are two broke twenty-somethings to do on a pristine summer day in Boston?Answer: Take in Boston history!

Despite the fact that I’ve lived in the Boston area for the past four years, I’ve actually never walked the Freedom Trail, the red brick path winding through the city which connects many of the historical sites for which Boston is famous. My parents have done it two or three times while I was in college, but I had just never done it. Mostly I use the city for a) sitting in the Common reading the newspaper on my lunch break and b) shopping. And c) shopping.

So this morning, I was psyched when Adam suggested that we join the herds of tourists and walk the trail. It was gorgeous today — 82F with a light sea breeze and very little humidity — so we hopped in the car and parked in a parking garage downtown. (Normally, we would take the T. But today they were running a shuttle between MIT’s stop and Park Street, and a crowded shuttle bus wasn’t on the list of things with which I felt like dealing today.)

We only walked the Boston part of the trail, but we got a nice long walk in today — almost four miles! 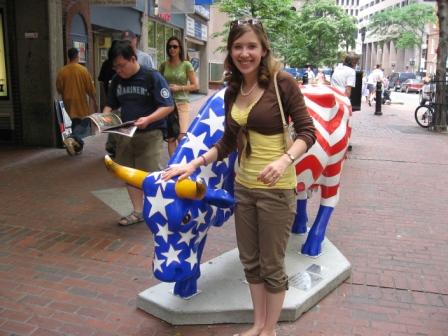 Boston is in the middle of a Cow Parade. I thought I’d look like a super-tourist and pet the cow for the camera. (Note: Only tourists take pictures with the cows. Boston residents are WAY too cool for this sort of thing. When you get to MIT for orientation, you have approximately a two-week grace period in which you are allowed to act like a tourist, but after that you have to pretend to be a jaded Bostonian.) 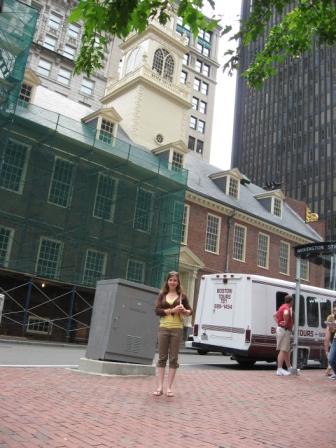 The old statehouse is Boston’s oldest surviving building. Right next to the statehouse is a marker commemorating the Boston Massacre, which happened right there. There’s a museum in the statehouse, but it costs money, and Adam and I were determined to spend as little as possible. 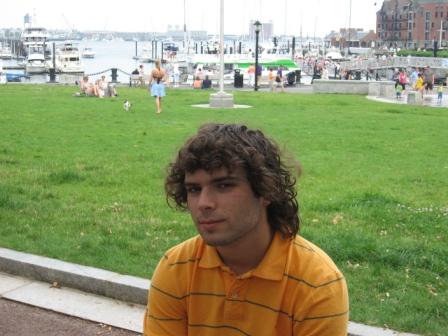 Next, we headed to the waterfront park. It’s very nice there, and it smells like the sea! We haven’t had a hurricane in Boston since I’ve been here, other than the remnants which come up the coast, but we do get some pretty sweet nor’easters, especially in the winter. Nor’easters are like hurricanes, only way more fun. 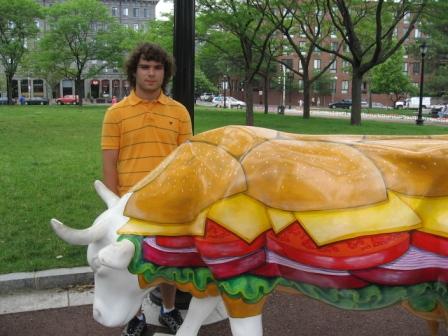 Adam met this veggieburger cow in the waterfront park. 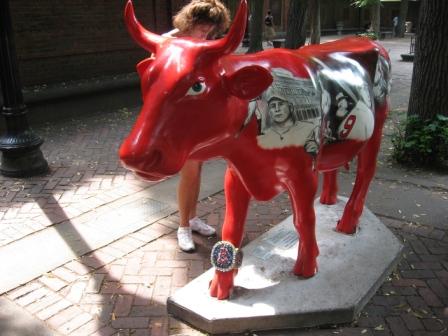 I like this Red Sox cow because of the World Series ring on the front leg. When the Red Sox had their amazing comeback in the 2004 ALCS to beat the Yankees, my friends and I (and pretty much all of Boston) ran to Fenway Park to celebrate in the streets. I could hear the World Series from my river-facing MacGregor window — believe me, it’s really tough to study for a 7.20 (Human Physiology) test on the liver when the World Series is going on outside your window. 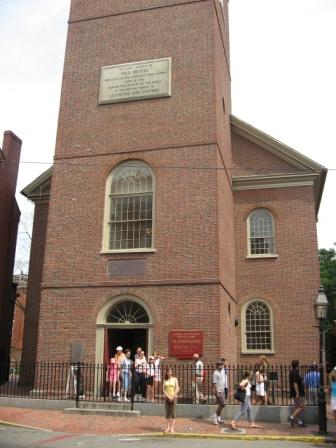 At the Old North church, we learned that Paul Revere didn’t really hang the lanterns in the church himself (he sent somebody else to do it), and that the it was really “one if by land, two if by water” — the British were either going to march to Charlestown by land, or they were going to go via the Charles River. Hope they brought their hazmat suits. 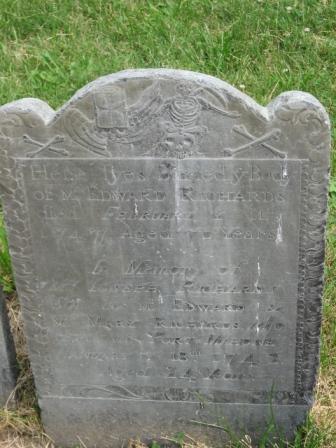 Copp’s is one of the oldest graveyards in Boston. This guy died in 1747! 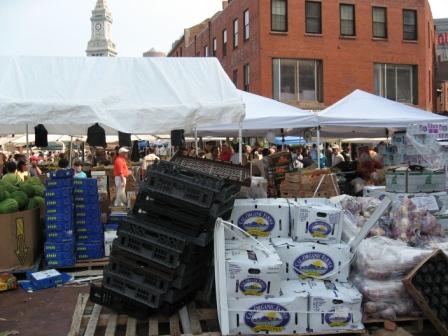 Haymarket is a farmer’s market held in downtown Boston on Fridays and Saturdays. You can get pounds and pounds of produce at ridiculously cheap prices — a dozen oranges for a dollar, six red peppers for two dollars, five pounds of potatoes for a dollar. It’s great. I like to go to Haymarket on Saturday mornings and make a nice cheap vegetable stew for dinner. 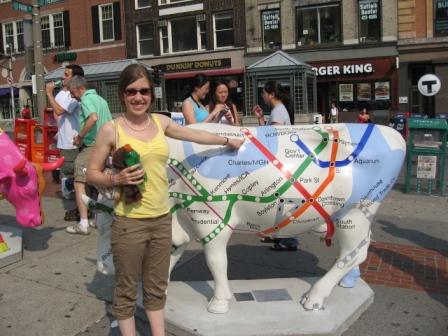 This is where we live! 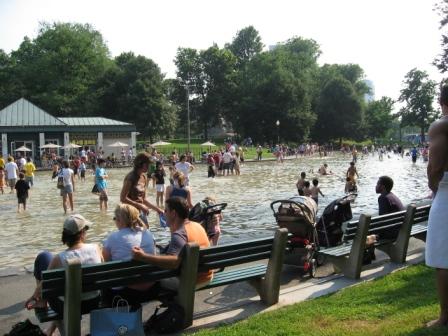 The Boston Common Frog Pond is a wading pool in the summer and an ice skating rink in the winter. By the time we got to Frog Pond, it felt really good to wade in the cool water. 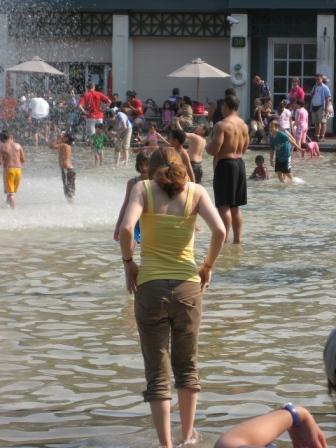 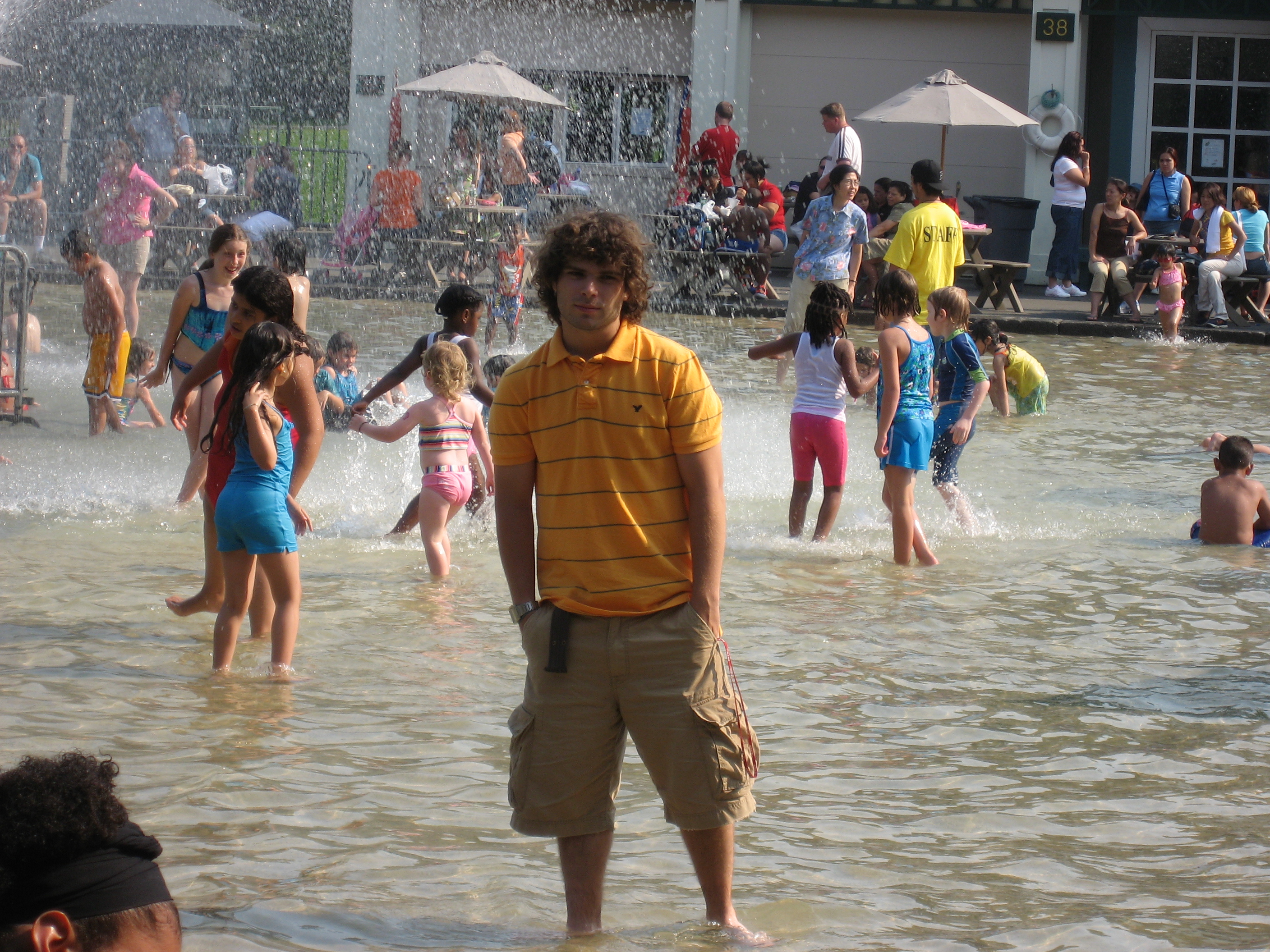 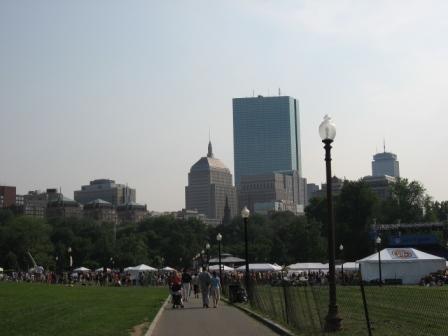 From Boston Common, you can see the old Hancock Tower, the new Hancock Tower, and the Prudential Center. But that’s an entirely different walking tour. :)

3 responses to “Freedom costs a buck-oh-five”