If you're looking for more apples, do not click this.

Tonight, I emerged from a coma of essay-writing and unglued my gaze from OpenOffice long enough to wander up two flights of stairs and straight into a delirious, dripping dream. Having recovered enough by now to return my shocked fingers to their home-sweet-home row keys, I write this in pendulous obligation to the slippery edge of a Sunday night that is separated from Monday (a student holiday!) by precious few oscillations of a cesium atom.

Editor’s note: The following is not for the faint of heart, nor the high of blood pressure, nor the diabetic of pancreas.

It’s the end of the week, and apparently someone up above (by which I mean the 4th floor of Random) has decided that the MIT student body has yet to change its weekly quota of potentially bad ideas into kinetically bad ideas. So, the logical conclusion is to deep fry various organic structures into a state of unrecognizable (yet crunchy) homogeneity. This made more sense than some of my answers to the last biology problem set, which took a long time to cook and turned out sort of bland, so I decided that it was safe to take a look.

Before I venture any further, I’d like to introduce you to a site called mitadmissions.org that has all sorts of fantastic information about admissions, academics, student life, apples, and even dining options at MIT.

Some students prefer to cook their own meals, daily or on special occasions. Every dorm suite sports a full-size kitchen and barbecue pits line the courtyards of every residence hall.

Never mind that this would imply that Random is not actually a residence hall by virtue of its lack of barbecue pits (not to mention a courtyard in which the barbecue pits line themselves up like well-behaved, frankfurter-cooking kindergarteners, pardon the mixed simile); let’s talk about the kitchen and its role in certain not-unheard-of “special occasions”. Random Hall has roughly 0.0714 kitchens per resident (that’s one kitchen per fourteen residents), so it’s more than plausible to make every day a special occasion. It’s also within a 5 minute walk of two well-stocked grocery stores, one of which has a hefty supply of vegetarian/vegan/special diet options and the other of which has a hefty supply of MIT students stocking up on peanut butter, bread, and Nutella (in case France declares war, I guess). That’s in addition to a small Korean market across the street and a gas station convenience store within arm’s reach for anyone who has six-feet long arms.

Rebecca ’12, for instance, is renowned in Random Hall for her elaborate recipes, which are supposedly so complex that they exist only in the imaginary plane. I was fortunate enough to accompany her on one of her grocery runs last week and personally witnessed her purchase of $80 worth of vegetables and cooking staples (vinegar, rice, etc.), which will no doubt go into many weeks of tasty and nutritious dinners.

This blog, however, is not about Rebecca and definitely not about nutrition. It’s about various permutations of grease and meat and pastries. Please adjust your expectations accordingly at this time.

So, up I walked the stairs like Alice into a greasy Wonderland where the atmosphere was an unearthly solution of nitrogen, oxygen, and oil droplets, heavy with visions of unborn culinary chimeras. The atmosphere was palpitant as Dr. Frankenstein readied the fryer, the unspeakable materials having been collected and dumped tableward. 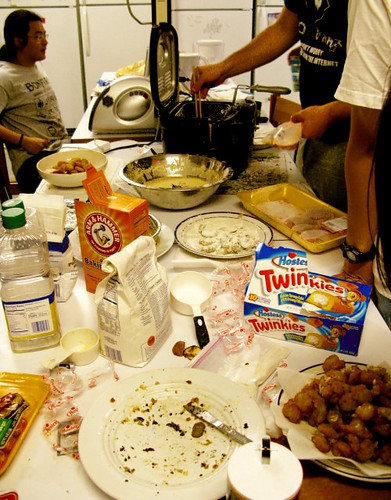 Some of you are probably clutching your intestines in fright and wondering if Draino can be used to unclog arteries, but let it be said that this amputated Italian sausage was the lightweight of Random’s cholesterol olympics. 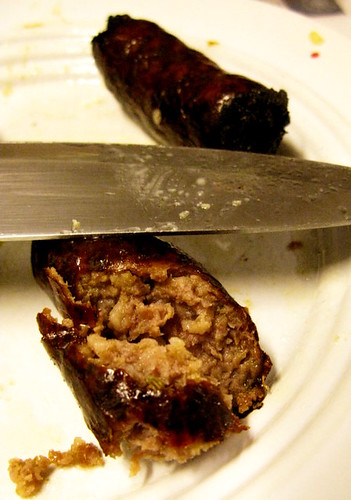 Onions curled limply like deformed (yet crunchy) tentacles, remarkably similar to the ones that emerge from the plutonious depths of the Charles River during a full moon. 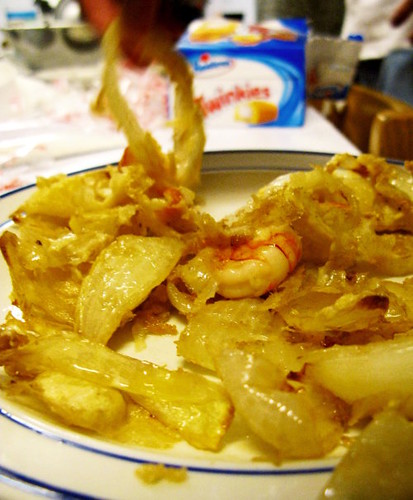 Note to all the aspiring Jean Georges out there: Add flour to your onion rings before you coat them in batter, or else the hot oil will be like the Earth’s atmosphere and the batter will be like the rock on the outside of a meteor entering at 70 km/s. 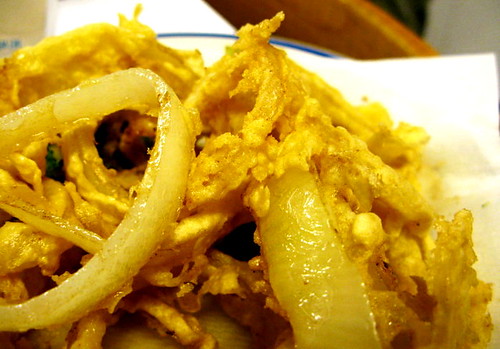 Conventionally, there’s four states of matter. And then there’s potato, which according to the latest research exists in at least 29 states of matter, including raw (the form occurring in nature), French fry (degenerate state with structural deficiencies), tater tot (only forms under high heat and pressure), mashed (theorized to be a transition state between baked potato and potato pie filling), and hashed brown (which, according to some physicists, has no inherent differences from the tater tot). Random Hall’s state-of-the-art deep fryer produced an impressive total of two such states in the span of 20 minutes. An in-depth, empirical analysis of our results will be published in next January’s issue of Science. 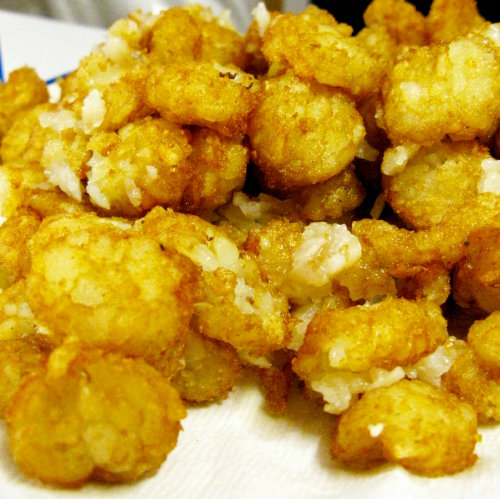 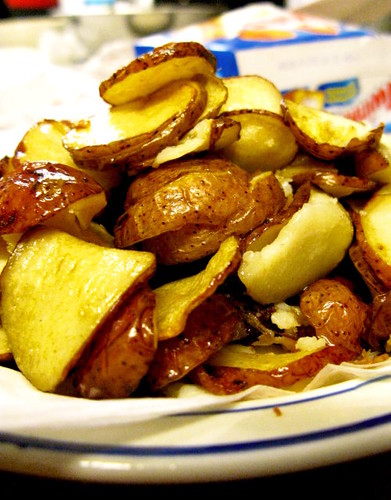 At some point, our lipid-covered soirée took a sharp left into total perversity. The philosophers of ancient Athens have long warned that the path to self-destruction begins with fried Oreos. 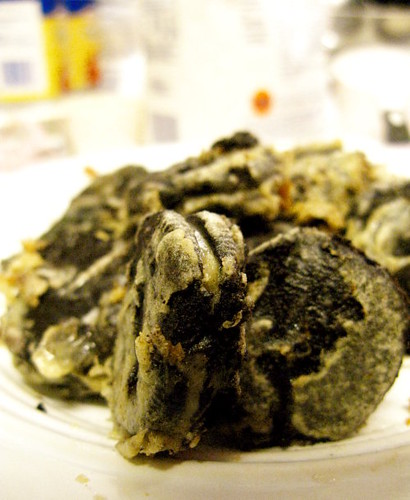 . . . and soon progresses to the soft, golden centers of human vulnerability, sucking away the white cream like marrow from our hapless souls. 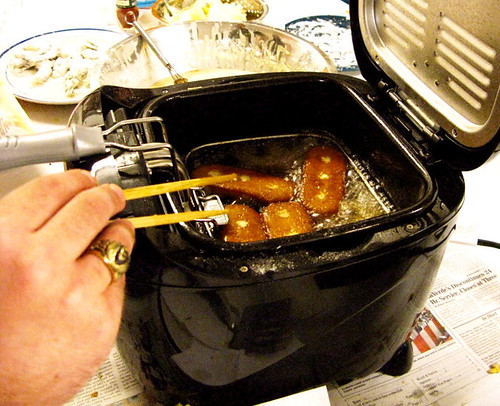 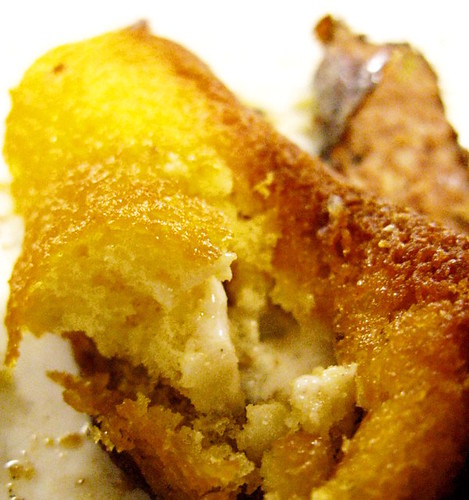 Fried Twinkies were too morally challenging for some of our more conscientious participants, so they opted for a cleaner, lighter alternative. Deep-fried broccoli, crystallized in crusty nubs of pancake batter! Have you had your daily serving of irony today? 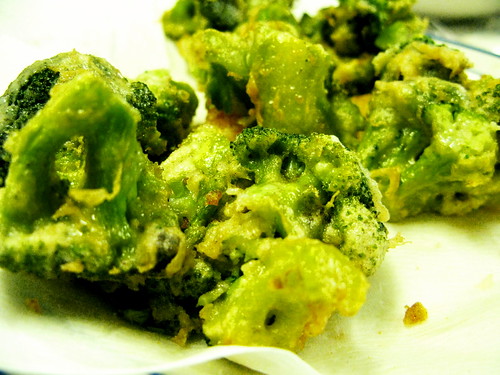 Eventually, I got tired of living the hallucinations of a McDonald’s worker on NyQuil, so I departed to my floor in escape from the reminders of tonight’s merciless ambush on innumerable broccoli stalks (for what is broccoli but the nuns of the vegetable world?). Peace was not to be found; it just so happened that someone else also considered tonight a special occasion. 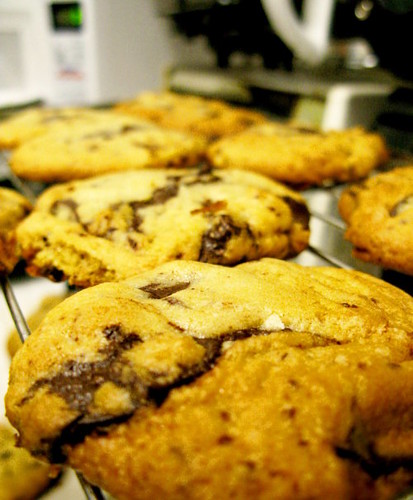 Natania had decided to bake a batch of cookies for her professors, which to me seems like baking a batch of tenure for your professors. What more could one ask for? 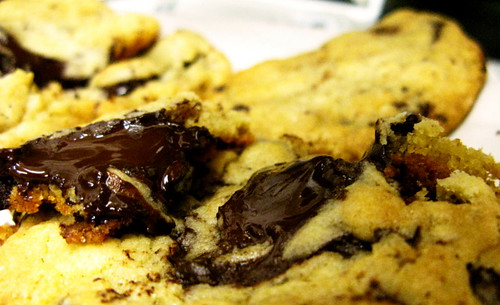 The Food Pyramid just called and threatened to take legal action, so it looks like I now owe you a blog about health and wellness.

19 responses to “Fryday on Sunday”