One thing you can totally count on as a student at MIT is for Boston to provide the chance to participate in random, spontaneous, fun events with large groups of people. Examples that I’ve thus far experienced have included city-wide pillow fights, web-comic meet-ups, no-pants subway rides, Red Sox riots, and now a new one. Several weeks ago I heard about a gathering of similar magnitude to my past adventures. This one, a Revolutionary War recreation, was bound to be one of the more epic moments of my summer. I checked out the Banditos Misteriosos website for the details.

The summer is heating up, thus, it is with pride that Banditos Misteriosos announces the Revolutionary Water Gun Fight.

Consider this event the combination of a good old fashioned water gun fight and the revolutionary battle of our forefathers.

Staying true to Boston’s historical roots, this water gun fight shall focus on two armies, marching and meeting each other for a battle in a specific location.

I instantly registered and made Dan Sauza ’11 register too. On Friday evening we received out orders via e-mail:

The king has refused our demands and thus, you have been drafted along with 450 other soldiers into the Boston Minutemen, fighting alongside your countrymen! We shall put those Tories in their place.

Weather Intelligence:
War is hell! There might be a bit of rain tomorrow, but this battle is taking place regardless! You can bet our countrymen never gave up due to a little bit of precipitation. All our past events have had record number of participants, and two of them happened during blizzards. We are Bostonians, we never negotiate with bad weather.

Expect an all-out battle, we shall see you on the field. If this be treason, make the most of it!

God Bless America! We went to sleep that night dreaming of Torries, slaughered, strewn about the battle field.

I awoke in the morning and spray painted my weaponry black (leaving the barrel orange, of course, so as not to be shot by Boston police). At around 11:15 Dan and I prepared for combat, him with a tri-tipped hat and I with a blue bandanna headband. We left the dorm at 11:30 so we could go to the mall and pick up a super soaker for Dan. On the way we stopped at Verdes (grocery store in the student center) and bought 2-liter bottles and dish soap.

I think I should take this opportunity to say that we interpreted “bubbles” as “dish soap” because our brains jumped to the only logical solution I could think of: we would turn our squirt guns into bubble shooting weapons of the foam variety. Never did we consider that “bubbles” could mean blowing bubbles. Apparently we were wrong.

We headed towards Kendall and caught the free shuttle to the mall (it picks up right outside the Kendall Coop, is free, and says “CoolSide” on it…take advantage of this handy bit of transportation). We got to the mall and went into KB Toys.

Dan and I left and quickly brainstormed. Were there any toy stores anywhere else that may sell water guns? We couldn’t think of anywhere immediately nearby so we decided to just cross the bridge into Boston and look around the meetup area. Dan suggested we call somebody and ask them to check for toy stores. I called my dad and he employed my mom, both of them searching for nearby toy stores or super soakers. The only store nearby was too far to walk and didn’t sell super soakers. Also discouraging was the Craig’s List ad my mom found:

“Looking desperately for a Super Soaker for this afternoon. I’ve been everywhere in Boston and everybody is sold out. I just want to have some good old revolutionary fun!”

Seriously!? The entire city was out of Super Soakers? This could be a problem. We decided to take a gamble. With an hour until meetup we grabbed the T at Charles/MGH and rode back to MIT. We walked briskly to the dorm and checked with the front desk. Sure enough, the front desk had not one but two Super Soakers for residents, so Dan traded his ID card for the gun and we headed off, back to the T and back to Boston.

We walked up to the Hatch Shell, the meeting place indicated by the map, and noticed a large group of people rallied. We hadn’t filled our bottles yet so we quick crouched by the Charles River and filled our two liters, sounds of cheering and cries of “Huzzah!” in the distance, Super Soakers being brandished patriotically. Our general was addressing his troops, authentic star-circled American flag patriotically flapping behind him. Well, mostly authentic, try to ignore the duct tape and just focus on the ring of un-taped stars. 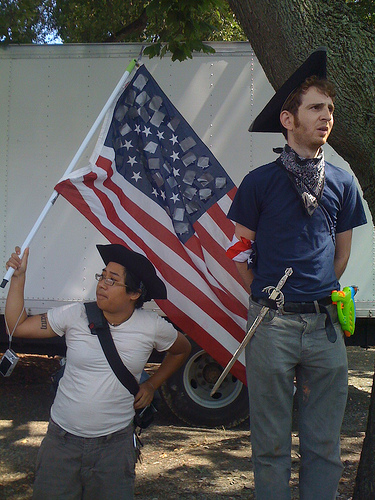 Our bottles filled and muskets loaded, Dan and I joined the crowd, led by a drummer and fife, and marched onward towards battle. The public watched as their brave loved ones departed to fight for their country’s honor. 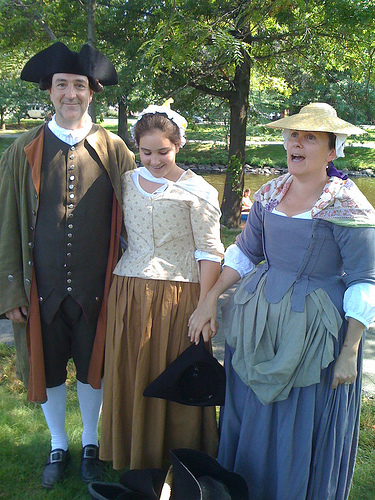 Talk turned towards munitions and it was confirmed by many that Boston was officially sold out of firearms. No Target, Toys-R-Us, K-Mart, CVS, KB Toys, or Wal-Mart had any water guns left. None. Onwards we marched.

In the distance we spotted a sea of red approaching, British flag flying. We marched towards them, bordering the north side of the battle field. The marched towards us, bordering the south. In the middle, innocent bystanders began to notice what was happening and fled for their lives. War cries erupted from the two sides, slurs flying and water shooting into the air. Teeth bared, we followed our general and formed rows facing West as the Torries formed facing us to the East. Our general met theirs in the center of the field as cries emitted from both groups of soldiers. An agreement was not met and the generals returned to their troops, prepared to give the order.

It was a standoff, blue Americans staring at red British, the reds returning the favor. A shout, a roar, and it began, the British rushing towards us, guns blazing. 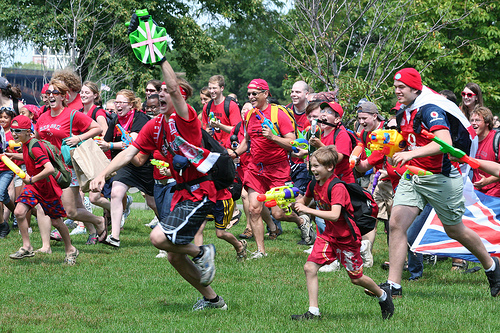 “CHARGE!”
“AAAAAHHHHHHHHHHHHH!!!!!!!” We stormed forth and met them in the center, blasting anybody in sight, not shooting until we saw the whites of their eyes. Dodging, ducking, firing, the war raged. 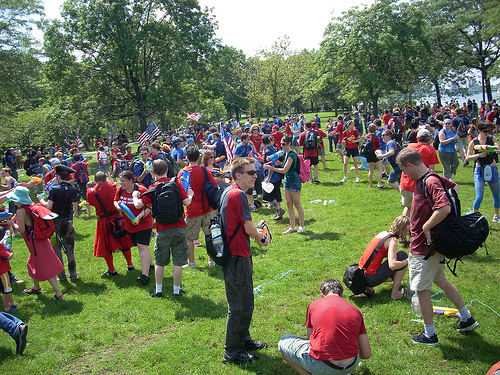 With every shot I covered the enemy in suds, marking my victims as I continued my slaughter. Never leaving the field was our faithful flag, there to give us hope as we fought bitterly, outnumbered greatly by the British, but stronger in spirit. 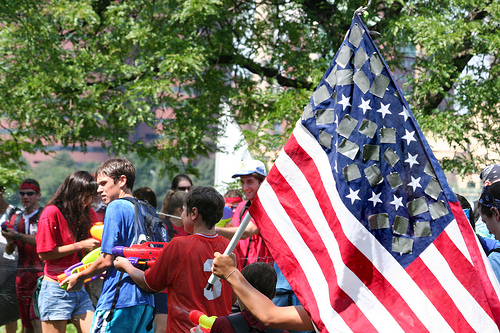 That’s when I saw it, our general, shot and exhausted. No longer shouting to inspire, he instead dragged himself off the battle field. I thought it was over. 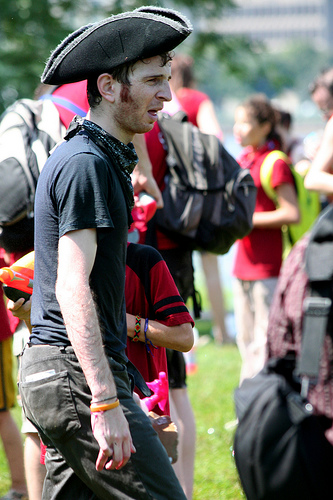 Hope was soon revived when I glanced past and saw the Americans’ final stand. Huddled around their flag and fighting strong, eight brave Americans fought to the death, defending their country. 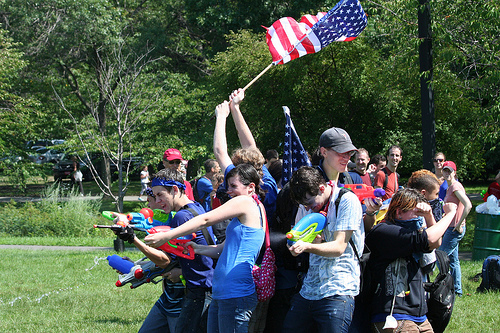 In the end, even after a weak attempt at peace that involved bubbles and robots (remember, I didn’t have those kind of bubbles, my bad), the battle raged until both sides had enough casualties to warrant a truce. Outnumbered but not outplayed, the Americans proudly held their ground and will live to fight another day. Take that British, go back to England where you belong. Drink some tea and speak with your silly accents, this is America, home of the free man and we will gladly fight to defend our land. 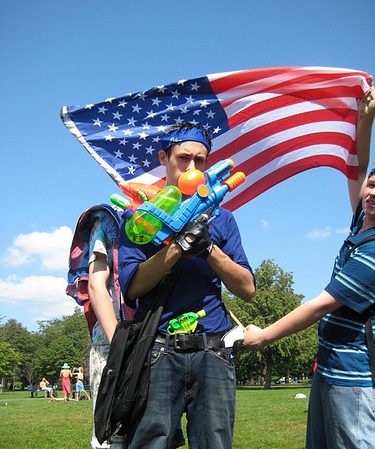