I’ve recently started to use Notion on a small scale after Kathleen bestowed her wisdom upon the bloggers. It is unarguably god tier for task management, once you get over the small hump of activation energy to actually set everything up.

The Notion renaissance has made me reconsider the ways in my life that I’ve used task management, especially for goal setting. During the school year, I don’t actually use much task management other than maybe keeping a list of to-dos in Google Keep, or my halfhearted attempt at keeping a Trello last fall.

yes, it’s super low effort, and I made no effort to organize things into categories or prioritize or anything

During my summers, I always try to set some concrete goals for things I want to do, both for my job and for other things. These goals normally fall under the categories of work, self-study, reading, school work, exercise, and personal projects. There are some random other things that make it in there as well. This summer, for example, I made a valiant effort to get through my backlog of games.

Since freshman summer, I’ve kept my summer goals in a markdown file in a Github repo. This idea was started by some friends who I took 6.006 with, and we all wanted a way to keep each other accountable for actually achieving some of these goals. As a result of this setup, I actually have an immortalized edit history of the goals I’ve kept over all three summers I’ve been an MIT student, which is pretty cool.

There is one pattern that I have noticed from keeping these particular records, and it’s that I’ve definitely gotten better at actually achieving goals I kept for myself. To be clear, I’ve never come close to finishing everything on a goals list, but it’s interesting to see how much more concrete and doable my goals have gotten over the years. Goal setting is a skill! Practice it!

I never really ever set goals for my actual internships, because that came as a part of actually being an intern – somebody teaches you how to set deadlines and timelines for yourself. I did, however, always set summer blogging goals.

It looks like I did pretty good freshman year, tried to be ambitious sophomore year, and reverted back to what worked for me originally junior year. Also, there’s always that one blog post every summer that I say I’ll write but then never end up writing. For 2018 and 2020, it’s pretty obvious which ones those are, and for 2019 it happened to be the mutual selection post, which we DID end up writing but it ended up being irrelevant. Oops.

Here’s a category in which I learned my lesson in particular. At the beginning of every summer, I feel a particular flash of motivation to get ahead on my classes for the next semester. This has NEVER worked. 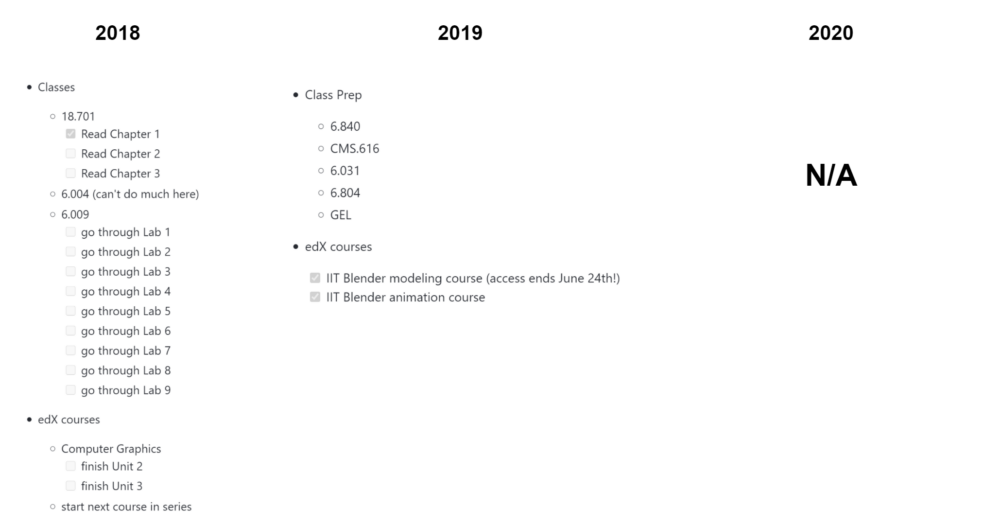 When there are other fun things to do, getting ahead on your classes – or taking extracurricular classes, for that matter – is literally the last thing you want to do. I learned my lesson hard after freshman summer, in which the only thing I did was read the first chapter of Artin’s Algebra, and wound up dropping 18.701 anyways.

Sophomore year, I did a little better and set a very small goal – learn Blender on edX. Since I was fairly motivated to do this, that actually worked out. But this summer, burned out after an intense spring semester and exhausted of having to use my brain, I finally acknowledged to myself that learning new things would not be happening. And that’s fine.⁠01 Important point #1

I NEVER read during the year. It’s just hard to find time to actually read, let alone want to read. Hanging out with friends is a much more productive use of my free time. Over the summer though, with a much larger percentage of free time in my day, I do attempt to read my yearly book quota. 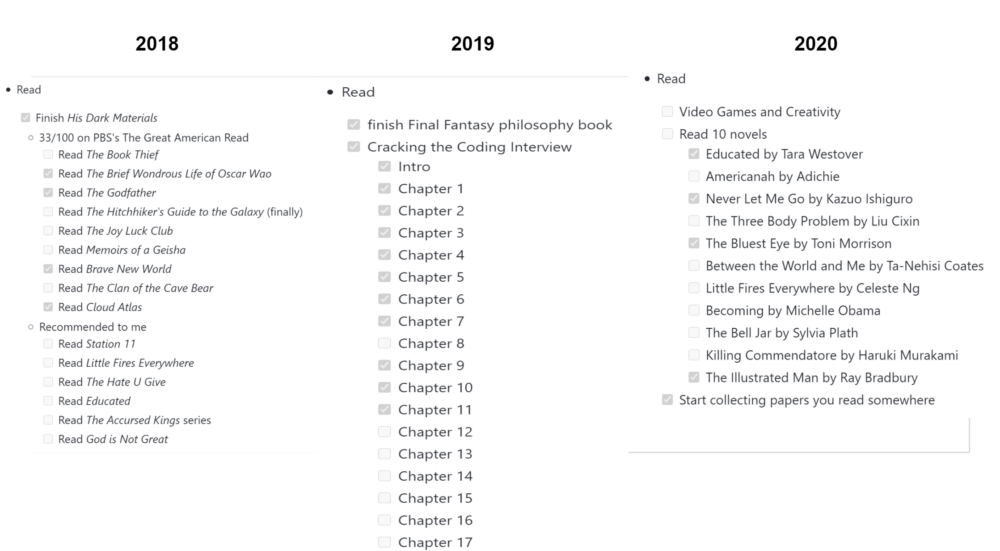 As you can probably tell, I SUCK at reading over the summer. Other than my valiant attempt to read all of Cracking the Coding Interview⁠02 and honestly, I can't even claim to have genuinely read that much of it; I skimmed most of it , reading is hard for me. I think it’s because without unfettered access to a library, my motivation to read goes way down – I’m not into e-readers or reading through PDFs.

But, again, despite not doing very good in any year, I did learn that framing the goal as ‘read 10 books’ rather than ‘read a bunch of books from this PBS Top 100 list’ did a lot more for my motivation to read. In the end, though, I had to spend a lot of my summer reading papers for research purposes. And I did find a place to start collecting papers – Paperpile is this GOD TIER Google Chrome extension that makes using Google Scholar SO much easier. So at least that’s something.

Honestly, even learning how to frame your own goals is an important life skill. Saying that you’re going to do a BUNCH of things is always futile; you will inevitably get overwhelmed. Setting a discrete and achievable goal, even if it isn’t that lofty, is a good way to keep progressing up the ladder all the way to a reach goal.⁠03 Important point #2

I always wind up with a few left over school responsibilities every summer. As expected, they have increased quite a lot over the years.

those hall rush posters never get done on time

Freshman summer, I didn’t really have many responsibilities. My UROP was my full time job, and the only major thing I did was order all the swag⁠04 granted, this is a lot of swag - like 10k of it for East Campus Rush/REX. I was also a rush chair for my living group, but those deliverables never get finished until the VERY last minute. Sophomore summer, I tried to get ahead on the jobs game, do my UROP project part time, and also be a rush chair again. This was pretty unsuccessful. I could NOT muster up the motivation to work on my UROP – or work on anything hard, for that matter – after a long day and a long commute in the hot LA sun.

This year, though, I sort of figured my shit out. I lowkey did my UROP for ~10-15 hours a week while also having a 40 hr/week internship. Obviously, I wasn’t as productive as I had hoped I would be. I really only finished the two main projects I had been working on previously, but even just that was a LOT. I really had my nose to the grindstone this summer, and it ended up being worth it, cause I’m gonna be PUBLISHED WOOOOOO!!! (blog post coming soon)

I’m not sure what motivated me to be way better at actually doing this work this summer. I think it might have been some combination of remote work not being as tiring as actually physically going to work, and my pure love for my UROP. I do credit not having to commute as a huge time saver in my day, though; honestly, I’m sort of a fan of remote work. I think that if I could live somewhere I really enjoyed, I would thrive.

Exercise has consistently been my biggest summer enemy.

As you can see, I literally gave up that first summer, and really did not do ANY exercise at ALL. Summer #2, I tried. I really did. But running in LA made my lungs burn with mostly pain with a side of shame, so I gave up on it pretty quick.

This summer, I actually had gotten really into running just prior, so I started out pretty good. And in fact, even though I didn’t run 5 times a week every single week, making it look like I didn’t do much this summer, I did manage to run at least once or twice every single week. I feel like that’s definitely progress, and this markdown file is not the best way to represent it.⁠05 Important point #3 Suggestions for how to better display that would be appreciated.

This is probably the category which hurts me the most. I haven’t ever managed to get this down, and that sort of sucks, because my ability to do personal projects has definitely increased dramatically over the summers.

Freshman summer, as you can probably tell, I didn’t really have a concept of personal projects. I wanted to learn new things, and didn’t really end up learning any of them, oops. Sophomore summer, I actually did do some cool things, and even made a blog post about it cause I was so proud! This summer, I fully intended to FINISH my personal website, but…did not do that. I do have a base for it, though, so once I get the aesthetics down it shouldn’t be that bad.

There are a lot of cool projects I’d love to do if I had the time. They flash through my brain occasionally, but I never have the time nor the energy to pick them up. I think that in an ideal future, I’d have both of these things left over after working for a day, and be able to actually execute on some of these ideas. But for now, I will remain tired, exhausted, and mentally unable to do anything outside of what is absolutely required of me.

I think it’s easy to look at these trackers from all of these summers and think to myself that wow, I didn’t really do much. Objectively, my freshman summer, I didn’t really do much. I didn’t know how to set goals for myself, let alone take steps towards achieving them. Sophomore summer, I iterated and got incrementally better. This summer, I managed to successfully have a whole other part time job on top of a full time internship. I think that’s progress.

Learning how to set actionable goals and work towards them has been a skill that I’ve carefully honed over my time at MIT – or rather, had it honed for me by getting my butt kicked in classes so often. Over time, I learned how to take on harder classes and bigger courseloads without absolutely tanking like I did the first time I tried to take a huge courseload freshman year. I now can juggle many more things at once, and manage to find success in more than just one of them.

This semester I’m going to try to keep practicing that. It’s my last semester, and there are a lot of things I want to achieve before I leave MIT as an undergrad for good. I hope I’ll be able to stay on top of all of them, but honestly, it’ll be fine if I don’t. I don’t think I’ll have any regrets for how I spent my time here.

So, sure, it’s easy to look at my tracker for this summer and lament all the things I did do. But honestly, despite the eternally nagging feeling that I should have done more, I’m going to choose to look at the things I did do and celebrate.⁠06 Important point #4! I had a successful internship and really enjoyed myself. I ran a decent amount and kept in shape. I got a freaking paper into a conference! And, I’m learning to internalize that my worth isn’t solely based off of my productivity, and that life is for living and doing the things you enjoy, not checking items off of a checklist.