Got any threes? by Snively '11

The floor on which I live, Conner 2, has a large TV. A large broken TV. As such, yesterday evening found a large majority of the residents of Conner 2 sitting in the floor lounge, eating Hsin Hsin (a great restaurant right across the bridge in Boston), and talking. That’s right, talking, no smash brothers, no mariokart, no zombies, just talking. We talked and talked and talked and talked, until eventually, the subject turned towards, well, fish.

One thing you’ll notice if/when you attend MIT is that e-mail mailing lists are the lifeblood of this place. They’re kind of like the MIT equivalent of the Facebook group. Everybody’s on a bajillion mailing lists and never bothers to take themselves off of any of them. One particularly interesting mailing list is called “Reuse.”

I’d say almost every student is on Reuse.

The idea behind Reuse is that if you ever have something that you no longer want, you just set it out in the hall, put a sign on it that says Reuse (the sign is actually optional) and then e-mail this mailing list with an item description and a location. Said item is now free game and the first person to get to it gets to have it. Items range from the boring (old clothes, magazines, etc) to the awesome (couches, projectors, computers, hard drives, etc). While most students are on Reuse, I suspect that most of the actual claiming of goods is courtesy of East Campus. A random number, pulled out of thin air, is that 75% of Reuse fodder probably is in East Campus right now.

Anywho, Reuse, the other day an awesome Reuse post got mailed out. It was as follows:

A 6 foot tall, 8 foot long fish with teeth made of metal and plastic. The plumbing for the water screen all still works. It has wheels for easy relocation but it would probably be good to bring a friend to move it. Also, it looks really cool.

I’ll admit, I’d seen this fish before. In fact, I know the guy who made it, so it made for a great story to tell everybody in the floor lounge while we ate our Chinese food. I regaled them with stories of how the massive fish had been built, how it was a beautiful work of art, how water flowed gracefully across its screen, but also how they’d built it in the hallway and nobody had been able to get it down from the third floor because it was too big to fit anywhere. After my fanciful bit of storytelling I realized that I simply couldn’t describe the physical appearance of this fish in such a way as to convey how awesome it truly was, so it was time for a field trip. I asked if anybody wanted to go look at the fish and Rob ’12, Brandon ’12, and Dorothy ’12 all jumped at the opportunity.

We headed towards campus from the dorm and ran into Becky ’12, another freshman on the floor.

We kept going and saw Sara ’12, another Conner 2 freshman, coming towards us.

Our group of six now headed to building 35, walked up stairs, realized that maintenance had blocked off the hallway, walked downstairs, walked down a hall, walked upstairs, turned right, and then saw a giant fish. 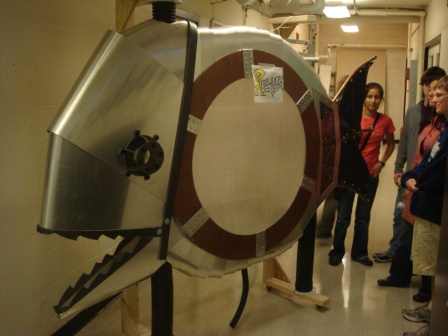 Everybody’s reaction to this fish is generally the same. It involves a certain amount of swearing, shock, and disbelief. Take minute to relieve yourselves of these things and then we can continue on with our story. 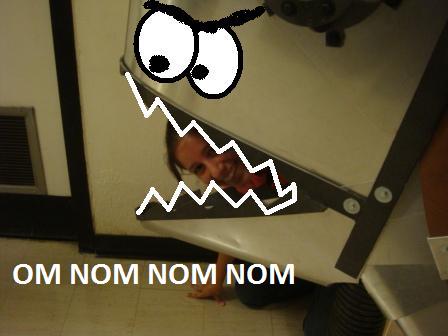 After admiring the fish we talked about why it was still there, how nobody could get it out. That’s when, and I can’t remember exactly who, but, some genius freshman decided that it’d be a good idea to take the fish back to the dorm. Erm, sure, why not, I guess we could carry it down these 5 flights of stairs, we have enough people. Thus begins the “Move the giant metal, PVC, and wooden steampunked fish screen across the campus to the dorm” adventure!

We each grabbed a corner, lifted the fish, and started very carefully down the stairwell. We twisted and maneuvered the fish expertly. We took a short rest on a landing 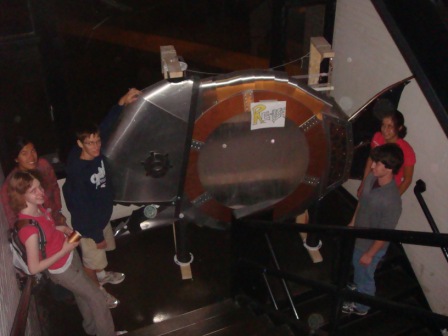 but then continued down the stairs and made it outside. Once outside we were a trip across the street and down dorm row away from getting to the dorm. We began. 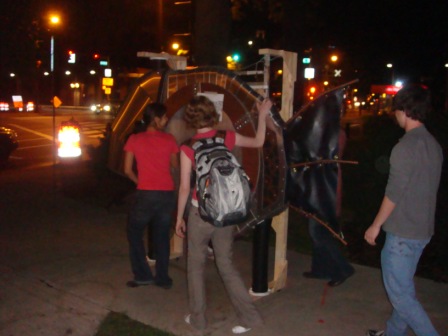 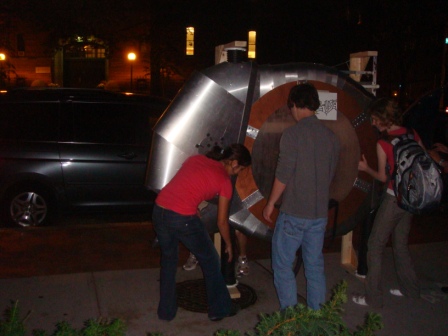 We continued. The crosswalk was too far away to get to, especially since there was construction on the sidewalk for quite a ways, so there was a spectacularly dangerous, exciting, illegal, and hilarious moment where we waited for a break in the traffic on Mass Ave and the pushed the fish as fast as we could right across the street, playing a very large, metallic, real-life mod of Frogger. We made it to the other side, started pushing the fish again, and right when we made it to dorm row the entire fish lurched forward and there was a sickening crunching noise. The front left wheel had sheared off. Not willing to give up, we hoisted the fish up and carried it the remaining distance back to the dorm.

Once at the dorm we really had no idea what to do with it so we just set it on a bench outside the main door and ran up to our floor to tell everybody what we’d done. People started filtering outside to observe and shortly we had a crowd of about a dozen Conner 2 residents all staring at a large fish, laughing, and trying to figure out what to do with it. 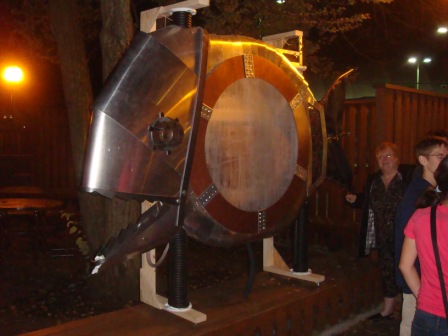 You could almost hear her brain working. She looked at the fish and visualized the stairs.

At this point our GRT’s (Graduate Resident Tutors, graduate students that live on each floor) walked up.

Some more conversation and then we decided it was time to get the fish inside, upstairs, and settled into its new home. The first flight of stairs was no issue because it was a normal, wide, long flight of stairs. Here’s the fish after having successfully reached the top. 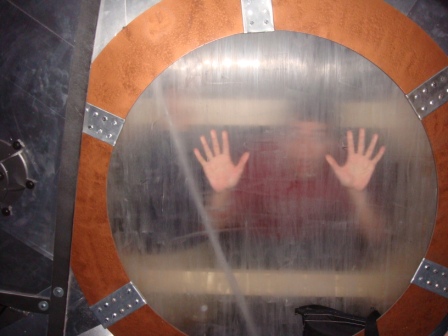 Oh, that’s Dan ’11 hiding behind it. Next it was time to actually enter the dorm, which required the assistance of the ever-important Sam ’11 and Megan ’11, door holding extraordinaires. 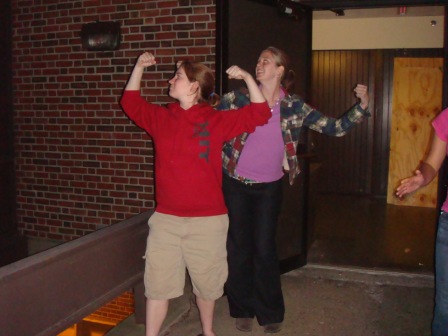 After getting the fish into the dorm we carried it over to the stairwell. That’s right, stairwell. Meaning circular, tight, and vertical. Not a happy environment for a 6’x8′ heavy metal fish. The following chunk of blog is going to be a mix between text and images, in stream-of-consciousness style:

“And with all the gracefulness of a large aluminum fish, it entered the stairwell.” 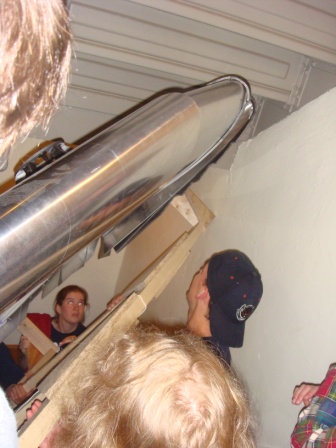 I can’t, wait, what’s happening. Its tail is caught, try to shove it, watch out for the light! 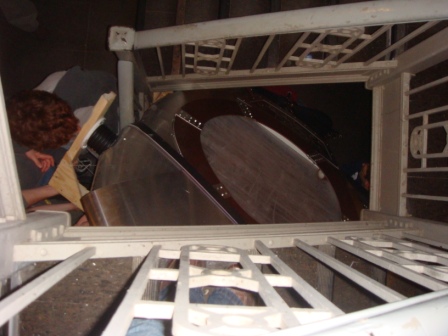 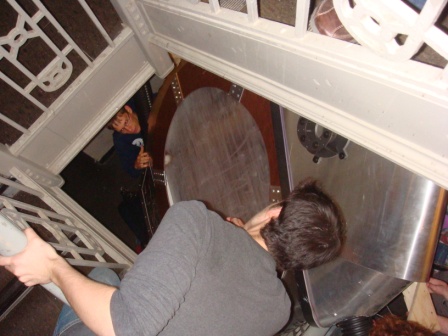 “Wait, what?”
“Push it that way! Tail down and towards the wall, head up, but avoid the light. Careful Dan!”

“Where did this come from?”
“Snively found it.”
“Snively!” 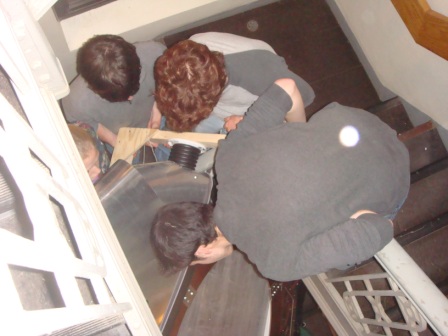 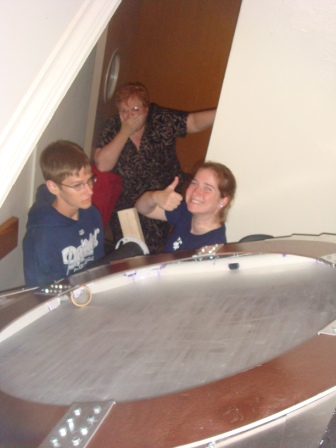 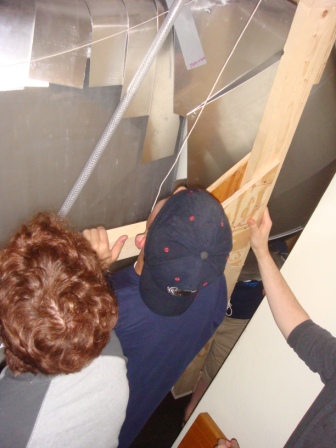 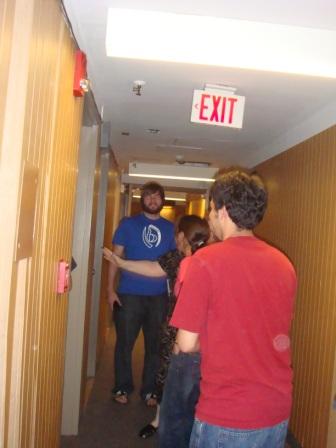 In the end we ended up retreating from the stairwell, taking the fish off of its wooden frame, and then taking it upstairs. It now lives happily in our elevator alcove, greeting everybody who comes to visit. 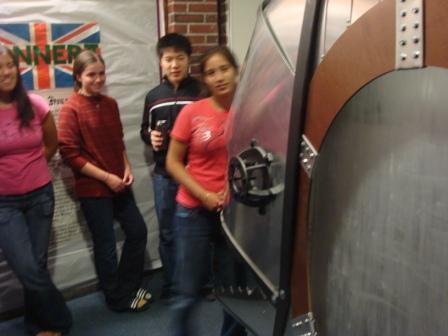 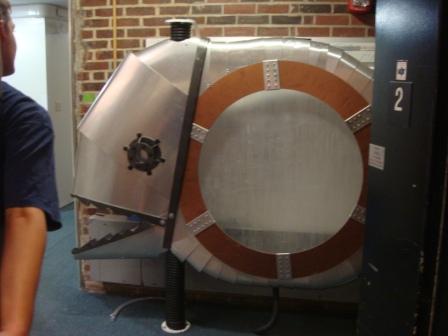 An that, my friends, is the story of the big fish.