A simple way to make your four year plan!

Danny B. ’15 is an 8-Flex/6-3 major with aspirations in both fields. An inhabitant of East Campus(5W) and an active member of the class of 2015, Danny always has his hands full with class work and outside projects. One day a new challenge caught his eye and CourseRoad was created, this is the story of that project.

[Disclaimer: What follows is going to be part shameless plug for my website CourseRoad, and part unsolicited advice/storytelling. If that’s not your cup of tea, maybe this will make you feel better :D]

Let me start with a piece of advice: you know the thousands of fliers that are posted over MIT bulletin boards? Whenever you get a chance, try to read as many of those as possible. You never know what kind of crazy adventures will follow. This past IAP, I was strolling through the Infinite when I came across a poster for something called “The iCampus Student Prize”. This blue piece of paper stapled to a corkboard at knee height let me know about a competition to build some piece of software to help MIT life in some way. Without much else to do, I kicked around the idea of working on some sort of entry until about a week before the deadline. Finally, I decided “oh hell, why not?” and built a prototype of CourseRoad over Presidents’ Day Weekend. I didn’t quite realize what I was getting myself into at the time.

You see, back when I arrived at MIT last fall, I originally told everyone that I wanted to major in 6-3, Computer Science. That was certainly a lot easier to say than responding with “well, probably 6-3, but I also love physics, so maybe course 8 but I dunno yet so we’ll see”. What I did know was that no matter which of the two majors I ended up in, I would certainly be stuffing my schedule with courses from the other.

At some point while investigating major possibilities (word play!), you have to figure out what each major requires for graduation. The MIT Bulletin (which holds information on the different departments) contains pages and pages of “degree charts”—lists of subject requirements for any possible MIT diploma. Pouring over the lists of X.XXX course numbers is confusing enough; comparing overlap with other majors is even more so. And therein lay a major problem: working out when to take your required classes over four years was hard.

The basic idea of CourseRoad, therefore, was to automate a solution to that problem. After hours of tweaking CSS and reading nearly every page of the jQuery and jQuery UI documentation, I built a site that allows users to add classes to a timeline of their academic careers and get immediate feedback on whether they’ve satisfied those classes’ requisites and how they’re doing on their major’s requirements.

I was sitting in bio recitation when I got the email that I had won the iCampus Prize. Along with a pretty glass paperweight, the department which ran the iCampus Prize, OEIT (Office of Educational Innovation and Technology, to whom I am endlessly indebted), also offered me a summer job to keep working on the site and improve it beyond the time constraints of the competition and weekly 8.022 psets. (Still not sure how I pulled that one off.) 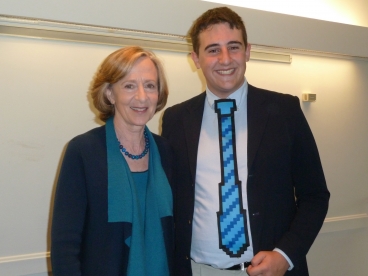 Yes, that is a clip-on 8-bit tie. For the record, Shockfield thought it was some kind of guitar.

And here we are today! Over the last few weeks, I’ve been wrapping up main summer development, and my team of beta-testers (to whom I am also endlessly indebted, Nat included :D) has sent me a sizeable swarm of bug fixes and feature requests. I’m now happy to announce that the site is once more open in version 2.0:

(You don’t need an MIT account to use the site, but if you don’t have the MIT Certificate Authority installed, you’ll probably get a security error.)

One more note: while I was working on CourseRoad to prepare it for the final competitive round, I realized that I was coming up on another important deadline—declaring a major. Due to my indecisiveness, I decided to attend the Physics Open House (which I found on a flyer! Always check the fliers!). It was perhaps one of the best decisions I made last year. I discovered that the 8-flexible major allows me to flood my schedule with both Physics and Comp. Sci. classes, which I’ve done—even my HASS is “Systems Visualization”.

And yes, I checked it all over on CourseRoad as well. :)