Psets, exams, and being "mediocre" at MIT.

So I was going to draft this entry last night (I went as far as typing “hosed” into the title bar), but then I decided to finish exporting my dorm’s i3 video, and then I lost an hour because of daylight savings (which was very exciting, by the way – I have never been in a country with daylight savings! – watching the clock on my computer go from 1:59 AM to 3:00 AM was exciting….okok I know I’m lame, sorry), so I never got around to it.

Just minutes ago, I logged on to mitadmissions, and there’s Jess with her tagline: “I’M HOSED.” and I’m like wow, I guess everyone’s pretty much the same then at this time of the year.

Although I can’t promise you an amusing survey, I can provide you an account of WHY we are generally hosed, though.

So some of you have been asking a lot about “psets” (by the way, it’s pset, not PSET. pset looks so much nicer. actually, everything looks nicer in lowercase. maybe i’ll stop capitalizing now, bwahaha.) Psets stand for Problem Sets, and they are the equivalent of the “homework assignments” that you get in high school.

Big differences between psets and high school assignments:
* There is generally very little busywork.
* They are comprised of mainly critical thinking problems, and the number of problems is generally significantly fewer than that of regular high school assignments (you might just get 5 problems, with a) b) c) d) e) f)…parts to the same problem – so in actuality you are doing like 20 smaller problems, but under the auspices of 5 major problems).
* You get an entire week to do a pset (or two weeks, in classes like 7.01x (Intro Bio)). But this generally doesn’t make a difference, because procrastination doesn’t stop once you’re a college student (often, it gets worse, lol).
* In many classes, they count for little to nothing in your final course grade. You know how your high school grade breakdown is like 30% tests, 30% assignments, 30% projects, and 10% participation? In most classes (not all, like psets count for a fair bit in 14.01 (Intro Econ)), your cumulative problem set scores won’t count for more than 10% of your final grade. The vast, vast, majority of your course percentage comes from exams and the final.
* They take much more time than high school assignments (18.03 psets are notorious for taking some people more than 10+ hours to do). 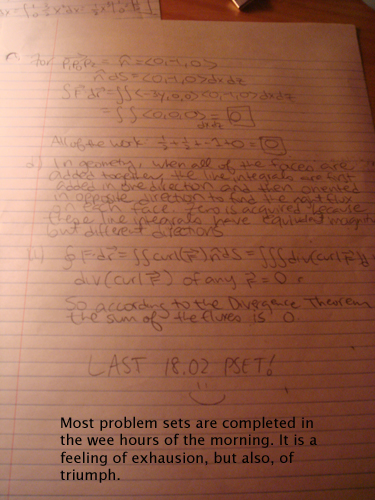 One natural question that you probably have, right now, is that if psets are worth so little in the long run, then why do people bother spending hours and hours to complete them? Ay, there’s the rub – if you don’t do the psets, then it’s almost guaranteed that you’re not going to do spectacular on the exams. And because the exams are worth so much, you should plan to do well in them, but if you don’t do the psets, then you can’t do well in the exams, and yadda yadda yadda.

Exams, similarly, are structured almost in the same way as a pset. You generally get 5 or so big problems, with more than 3 subsections to each problem. The difficulty is toned down significantly from a pset (of course, since you’re now doing it on your own on a time crunch), but the problems nevertheless remain challenging – and thus, each exam requires extensive reasoning and mental power. There is no such thing as “breezing through” a MIT exam, unless, of course, 1) you are a genius (like many people here), 2) you studied for an entire week for the exam (like other people here), or 3) the exam is predicable or easier (like some exams to introductory courses here – I’ve heard people say that 18.02, 8.01, 8.02, 5.111 exams are particularly easy, because they’re introductory courses…but I think they’re still not that easy).

Quite soon, after you begin taking exams at MIT, you’ll be introduced to the concept of “class average” and “standard deviation.” Since I’m just a freshman, I’m not entirely sure how the upper-level courses operate, but many introductory courses (for example, 7.01x, 8.01, 8.02, 5.111, 18.02) set the class average or writes exams so they predict the class exam average (8.01, 8.02 – since they have predetermined grade cutoffs) to be at the borderline between a B and a C. Course policies really vary from class to class, but it is generally safe to say that if you’re a few points below the average, then you have a high C. If you have one standard deviation above the class average, however, then you have an A. If you’re one standard deviation below, then you’re in trouble.

And this brings me to the point about “mediocrity”. At points, you would feel quite disheartened by your performance on an exam (especially one that you have prepared extensively for) when you receive your exam back, and it’s just one or two points above class average. Other times, you’ll feel frustrated about getting a C when you have studied a ton for the exam. But sometimes, I just feel like, simply, it’s not “high school” anymore. Exams are no longer something you can cram for in 2 hours and pull off an A – nor will you be able to do every single problem on a given exam. Yes, there will be times when the time crunch is so bad that you’ll have to turn in several blank answers because you don’t have time to get to those questions, and there are times when you’ll get a “mediocre” grade even if you poured your heart and soul out to studying and doing the psets.

Note that I always put “mediocre” in quotation marks, because I do not truly believe that anyone is a mediocre (in the everyday sense of the word) student at MIT. If you are here, you are a talented student that possesses potential, and MIT had recognized you as such (or they wouldn’t have admitted you!). Every day, I meet someone or I discover something that someone did that is truly amazing, and I’m encouraged and honored to be working or to be friends with these incredible individuals. Yes, you may be getting a C in Physics because you just can’t visualize forces or electric fields properly – but in the long run, you will discover your own niche and succeed.

Phew. That’s a lot about psets and exams, more than I intended. =p So why was I hosed this past week? 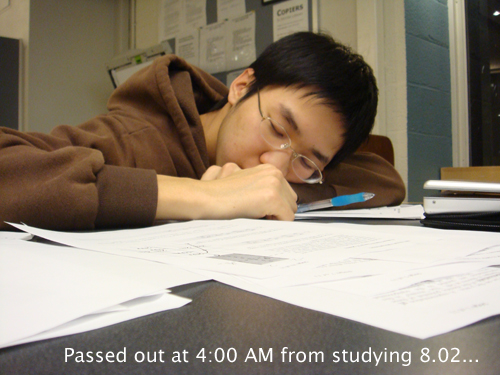 I wish I could post the video, but I don’t think we’re supposed to do it until the Housing Committee decides to publish them, so I guess it would have to wait. But it’s going to be awesome! Can’t wait until you all get here! woo! :)

Also, if I don’t post again before Saturday, best wishes to all with decisions. It’s what you’ve been waiting for, and it’s finally here! Inevitably, there will be great joy, and at the same time, disappointment and frustration. My best advice is to never give up on your dreams. If I did in high school, I wouldn’t know where I would be now. And in one short year (come to think of it, I only read this entry not even a year ago). Since then, I’ve gone to Spain with MIT, seen snow fall from the sky, learned what it feels like to host a SAT Prep program for over 300 kids, and is now beginning to experiment with the genetics of the organism that was the subject of the Nobel Prize in Medicine in 2002 (this is my UROP). I’m sure you will discover your own journeys, wherever you go.

And if you see something online the lines of, “On behalf of the Admissions Committee, it is my pleasure to offer you admission…” after you press the SUBMIT! button on Saturday, then I’ll see you at CPW! :)

I want to fly until I am shoulder-to-shoulder with the sun,
The world is waiting on me for change.
I am never scared of letting other people see my dreams,
I can achieve all of them here.

Laugh out loud, let us be together
Who says there can’t be joy everywhere?

Throw away your worries, step forward boldly
I’m now standing in the limelight.

In the beaches at sunset, the crowded streets at night
My own paradise is everywhere.

With you beside me, life is more exciting
Every moment is spectacular

[ps. You can actually see a lot of Taiwanese landmarks in that video…
0:15 = Chiang Kai-Shek Memorial Hall (or National Taiwan Democracy Memorial Hall), Taipei
0:38, 1:08 = Eluanpi Lighthouse, on the southern tip of Taiwan
1:31 = Tunghai University’s (in Taichung!) Luce Memorial Chapel, designed by I. M. Pei (MIT alum from ’40 who also designed the pyramids outside of Louvre!).
2:49 = Taipei MRT (Subway)
Various beach scenes = yes, those are beaches in Taiwan! and they’re warm-water too! all of them! =p]

I believe in you!