A performance art that lets students remind the teachers who's smarter.

If you’ve never seen “Hackers” then you’re depriving yourself and should make a point of getting on that train.* I get asked about hacking at MIT a lot, which is natural; I talk about it in my biography after all. There are times when I get asked, out of the blue, what made me decide to be Course 6 (Electrical Engineering and Computer Science). This confuses me because I’m actually Course 2 (Mechanical Engineering). After explaining this I then get asked “So why does your biography say that you came to MIT for the hacks?”

*Yes, I’m on a train again, and will probably include a train reference every time I write an entry from a train. I will also mercilessly steal blog formatting and style ideas from my friend Truman‘s blog.

A-ha! Hacking at MIT! There have been a bunch of entries that reference individual hacks here, and one or two that have talked more about hacking itself than individual hacks. I’d like to write one of those entries, an entry that explains what hacking is and what experiences you may have at MIT that involve hacks. And so with that, a quick primer on hacking at MIT.

Hacking at MIT has nothing to do with breaking into computer networks or computers. Instead hacking at MIT involves anonymous, ninja-like MIT students pulling off incredible feats of engineering right under the nose of the administration while quite possibly breaking dozens of laws and ending up on various rooftops around campus. Hacks could be considered “pranks” at any other school but since MIT makes up its own words and meanings for things they are called “hacks” here. People who pull them are called “hackers.”

Inevitable question one: Are you a hacker Snively!?
Well thought out answer: No, I prefer to take an observatory role. Let other people risk life and limb crawling on edges of buildings, I just want to see the end result. That, and I’d prefer to not be arrested while at MIT

If and when you are accepted to MIT there may be a day when you’re walking through campus and you see something a little out of the ordinary. Sometimes it’s small, a chainsaw in a wooden case, sitting
in a hallway. 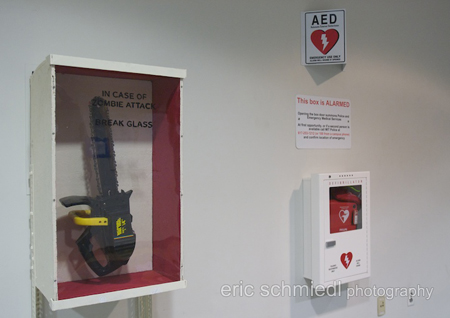 Other times it might be big, like a huge Scrabble board on the side of a building. 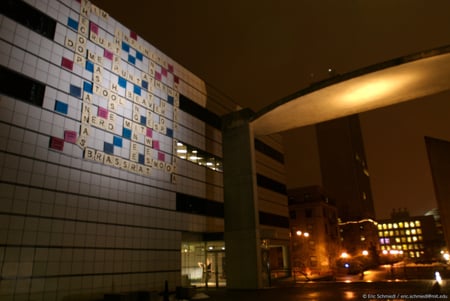 Sometimes it may be huge, spanning over a quarter mile!

Hacks started many years ago with some crazy Senior House people dragging a car up onto their roof using a rope and a lot of manpower. After that students realized that they could put more crap on roofs, including a cow (fake cow! fake cow!) … and then things got interesting. There’s a lot of history here you can read up on at the MIT Hack Gallery but I’m going to skip to the good part. The milestone in MIT hacking that kicked it into overtime was when one day an MIT Campus Police car showed up on top of the Great Dome.

Nobody knows how they got the police car on the dome, all they knew is that perched 150+ feet above everybody’s heads was a police car, lights flashing, with a dummy cop inside holding a donut. MIT Facilities stared at it in awe, not quite sure what to think. How, erm, how were they supposed to get a car off the dome? Helicopters flew by all day, getting some great pictures, and eventually the rappelling gear was brought out and the police car was carefully disassembled on top of the dome and removed in pieces. It was saved and is now on display in the Stata center if you’re interested in seeing it.

After the police car other stuff started appearing on the dome: a working phone booth, giant beanie, triforce, and a ton of other things. Hackers realized that there was more than just the dome, that awesome hacks could fit in any number of places around campus. MIT is blessed with buildings that kind of look like the aftermath of a game of “Perfection.” We have two domes, a square courtyard, weird statues, a 3-4-5 triangle building, Kresge, the Green Building, and that pile of architectural vomit known as the Stata (rhymes with “data”) Center. Hackers have played to the strengths of the unique physical attributes of each building, transforming them into ships, R2D2, and spaceship landing sites. 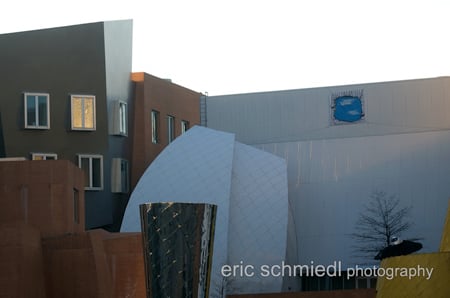 Hacks generally appear overnight since actually putting a hack up involves mucho illegality. Sure, MIT loves the aftermath of the hack, postering the admissions site and the MIT homepage with them whenever they happen, but MIT HATES hackers when they’re actually putting up a hack. Hackers have been dealt fines, had guns pulled on them, and even taken to court and threatened with jail time for hacking. More incentive for me to just enjoy looking at the fire truck on top of the dome. 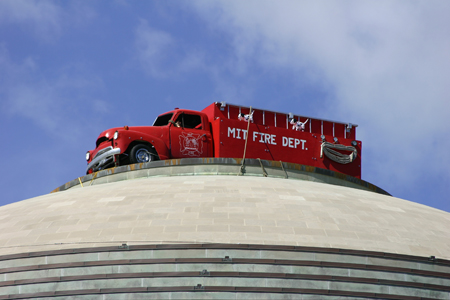 Inevitable question three: This sounds awesome! I want to run from the cops! How do I get into hacking!? Is it a club or something?
Well thought out answer: Hacking is not a club and you will never see it listed in any official activities pamphlets given to you at CPW, orientation, or anywhere else. The reason for this is because most of the things that hackers have to do in order to pull hacks are illegal and fairly dangerous. MIT doesn’t really like it when students break the law. How to become a hacker is left as an exercise for the interested reader.

Inevitable question four: How do hackers have time for all of this!?
Well thought out answer: Like any “extracurricular activity,” MIT students make time. We don’t always just lock ourselves in rooms to study, we do other stuff. Some people choose hacking.

As I’ve mentioned, hacks had a lot to do with why I wanted to come to MIT. They made me realize that MIT is, in a word, awesome. Not only are the opportunities here endless, the education first rate, but the amount of fun students had and the creativity that blankets the entire school is just phenomenal.