This is the second part of a two-part series about being an MIT student with some close friends at Harvard! In Part 1, I discussed how cross-registration helped me make friends at Harvard and how our friendship has evolved since we met. In this post, I describe how we’ve stayed in contact (and even grown closer) since being sent home due to COVID-19.

Staying in contact with my friends was more challenging than I expected after getting sent home from MIT due to COVID-19. I found myself calling friends I previously saw almost every day only once a week, at best. Everyone had to deal with their psets and exams,⁠01 the emergency grading policy of Pass/No Record didn't magically make us stop trying, surprisingly in addition to the new stress of an unexpected return to family life and the worsening pandemic. Even when we did have free time, things like time zone mismatches and Zoom fatigue got in the way of calling.

I took the drop in communication pretty personally at first. I wondered why my friendships were seemingly falling apart and questioned if they had been built on a false foundation. I found some resolution through directly talking with my friends about my worries. They assured me that nothing was specifically wrong in our friendships – they just had trouble balancing social calls with their other obligations. As the months passed and my life got busier, I began to also struggle with this balance. Still, my friends’ reassurance and my own empathy for the difficulty in finding balance didn’t erase the new vacuum in my social life. I missed hanging out with my friends. I missed forming memories together! The memorability of the average Zoom call is just so much lower than that of a meal together or a weekend outing.

The vacuum in my social life was filled in a few unexpected ways. One of them was reconnecting with my Harvard friends. As I mentioned in Part 1, we had stayed in contact since last summer, but rarely had time to hang out. As finals wrapped up and people began transitioning into their summer plans, I found myself joining group Zoom calls with them more and more often. Now, I talk to them more frequently than any of my MIT friends. I even made a new friend, Alyssa C. (Harvard ’22), who I had met before⁠02 We originally met over the summer at the most awkward middle-school themed party of all time. No questions will be taken at this time. but never had a chance to get to know well. I didn’t think it was possible to get so close to someone through just Zoom calls. Now I feel like I’ve known her for much longer than just a few weeks. 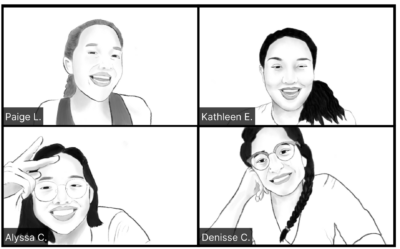 i draw the things i love

This little Zoom group, informally called PADK,⁠03 for Paige, Alyssa, Denisse and Kathleen has been so nice. We made a recurring meeting early on and can just hop in and out whenever. I see them at least three times a week⁠04 See point 3 and most weeks much more.

Here are some of the things we’ve supported each other through:

My Harvard friends have been my “quarantine dream team” because of how much they’ve supported me throughout the many ups and downs of the last few months. I feel incredibly thankful that they helped me think outside of the box to make plans for the near future that I feel truly excited about and I’m excited to see how our friendship will continue to evolve as we embark on our gap years.