A journey of four years begins with a single blog.

Three summers ago, I visited MIT with one of my fellow schoolmates. We were
en route to Mathcamp 2004 (which was held in Colby College, ME), and we decided
to stay in Boston for a couple of nights before heading up north. Interestingly
enough, the family friend that we were staying with knew a grad student from
MIT and asked us whether we would like to stay over for a night at the
Institute. Having heard so many amazing tales about what MIT contained, we
cheerfully agreed.

I am standing underneath the shadow of the colossal marble columns, no longer holding a tourist’s guide
to Boston, but rather, a thick stack of 18.02 course notes. I have learned that
the big domey place with the “Established for the Advancement of…etc. etc.”
is called “Lobby 7.” And, of course, I have learned why the Infinite Corridor
is called “the Infinite” (just run from New House to 26-152, the Physics Room,
when you are already late for class. You’ll figure out what I mean somewhere
along the middle of your journey).

So this will be my home for the next
four years. (Along with my Mathcamp schoolmate from 3 years ago, Jeremy L.
’10).

Anyways, that was a big introduction to nothing in particular,
but sometimes I still pause and think, “Wow, I’m at MIT. The MIT.”
Sounds silly, but if you know where I’m coming from, you might
understand.

I guess I am categorized as an “ABC,” but I’m not your
typical ABC. For one thing, I have never gone to school in the US, even though
I was born here. My parents moved back to Taiwan when I was still a toddler,
and so I spent my entire childhood (and all of my teenage years – so yes, my
entire life) in that lovely island in Asia.

Having no idea of my
citizenship, I grew up speaking Mandarin and Taiwanese and attending Taiwanese
schools. When my parents decided to transfer me to an international school in
third grade, I was depressed for weeks. However, I started learning English,
and now – ten years later – I can’t imagine how I would have turned out, if I
stayed in the Taiwanese system.

Despite going to an international school
(e.g. taking AP courses, having classes in English, freaking out about SAT 2s),
I guess I never felt like I was actually going to America. College was always
“in that place across the ocean” – and who cares about the future, as long as I
get yummy sticky rice and REAL bubble tea everyday? So it really
hit me when I logged on to the MIT notification system (prefrosh: prepare for
the most melodramatic moment of your life…) and read the admission letter. I
finally felt like, “Wow, so I am leaving this place, I am going to
America.”

So that’s me, in a nutshell, before coming to the US.

I post a lot of comments (which are somewhat helpful, I hope) on College
Confidential. I’m known as “Oasis” there, so you might have noticed that
I’ve been commenting on the MIT blogs as “Oasis.” Don’t ask me why I picked
that screen name – I don’t really know myself (no, it doesn’t have to do with
the band – though I did start listening to them after people commented on my
username!). However, I do have a lot of posts on CC (read: too much free
time in high school). All of this goes to say that 1) I’m unfortunately
addicted to that website (but I managed to stay off it for a month!) and 2) I
like giving advice in general – especially if I’ve been through something and
there’s no need for you to repeat the same mistakes that I’ve made. I
probably would not know too much about the strategies of Halo 3 or whether USC
will win this year in football, but feel free to ask me questions. I’ll do my
best to respond. :)

I still do not know exactly what course I’m going to
be at MIT – but I know I’m going to go in the Chemistry, Biology, or
Biological Engineering direction (in other words, Courses 5, 7, or 20). I love
to travel – so I also hope to tie in that interest through the things that
we’re going to be doing in iHouse (more on this soon!) and D-lab (first semester next
year). It should be an amazing journey.

Mm-hmm. That was a lot of text,
and I definitely hope I did not succeed in boring you to death with my
ruminations – therefore, I’ll let some pictures tell you the story of my
first couple of weeks at MIT: 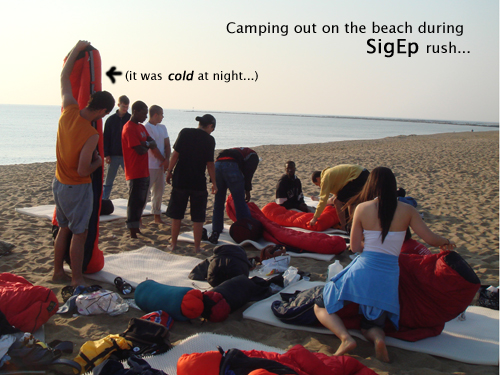 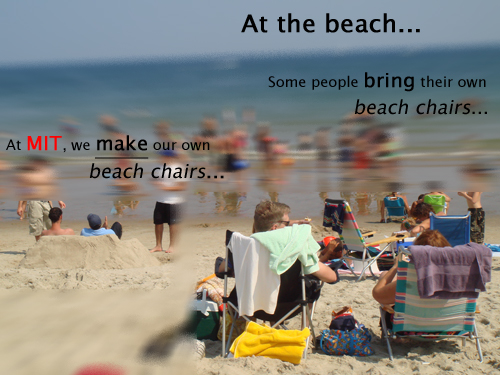 Fraternity Rush is basically the last
weekend before the start of school (yes, these pictures are old…I know…)
and a couple of days into the new school year. Froshies get taken around to all
of MIT’s fraternities (there’s 27 of them! – and 5 sororities) and they
basically enjoy a ton of free food (mmm – includes the traditional
free lobster and steak dinners) and – if you get to know some
fraternities to a greater detail – off campus trips (I went on a kayaking trip,
a beach trip, and a Boston “food tour” this year!).  ‘Twas fun.
:) 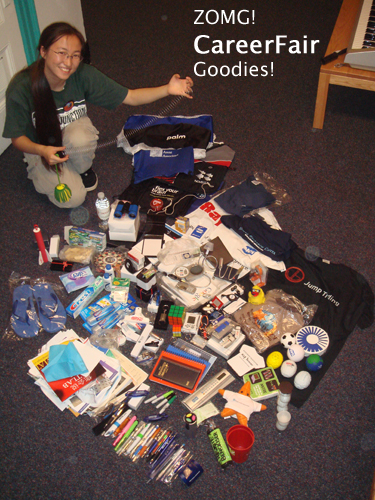 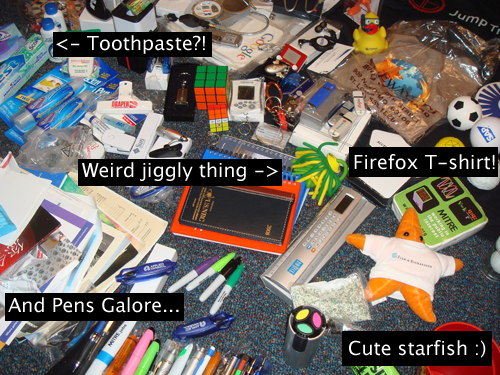 One of the amazing things about MIT is the scope of its
connections with the major companies and corporations from all the world – yes,
we are talking about companies like Microsoft, Google, Morgan Stanley, IBM, Sun
Microsystems, Limewire, Hewlett Packard, Intel, Xerox…you name it, MIT has it
– it’s really not an understatement to say that these companies recruit straight
out of MIT (in fact, that’s what a lot of them do through Career Fair). In short,
Career Fair is an annual massive conglomeration of company representatives who
are interested in recruiting MIT students to work for them. A lot of students
(juniors and seniors) submit their resumes and get all dressed up for the
affair…while others, like HaoQi ’11 in the picture, go and collect
check out all the cool gadgets. I actually missed out on this year’s career
fair (because I was being a good student, and went to class…ahem) –
but it’s alright, there’s always next year. =p 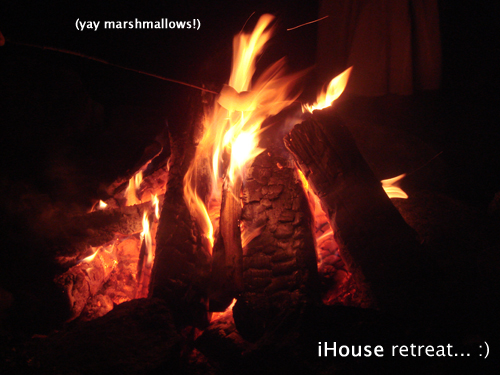 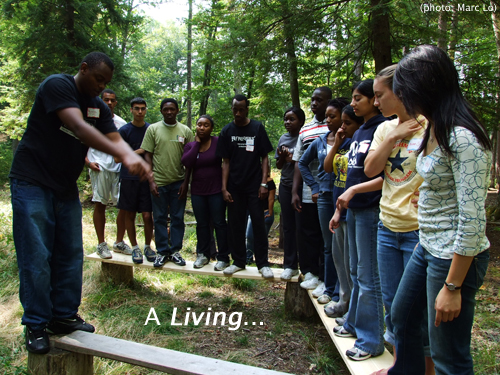 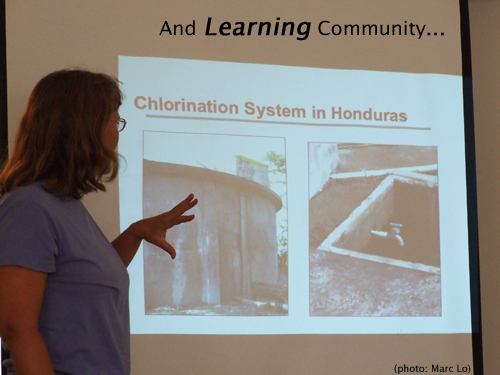 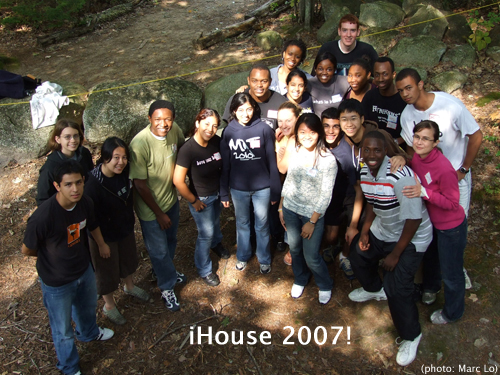 Like I mentioned before, iHouse is my dorm. I don’t want to go
into too much detail here – because you will surely hear a lot from me about
iHouse in the entries to come, but iHouse is the newest (we’re the inaugural
year!) living and learning community within MIT. So what exactly is a
living and learning community? Is it after-hours school within the dorm (eww)?
Basically, we all would have opportunities over the four years to conduct
international development projects (very similar to the ones under operation in
D-lab), under the guidance of Amy Smith (D-lab instructor, also the lady above talking
about Honduran chlorination systems) and the Public Service Center
(which also maintains blogs on MIT Admissions!). But most of all, we get to work
with one another, toss around ideas, and just share our visions while still
living under the same rooftop! 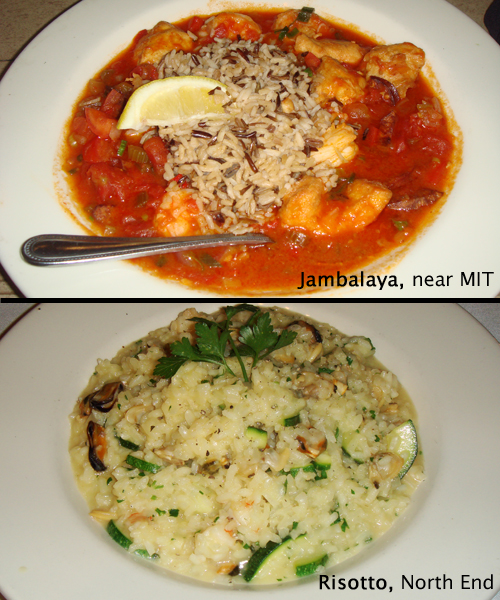 Be warned – in the time to come, I will probably be blogging a
fair amount about food, since I love to eat (don’t worry, it will not
dominate my blog, I promise :)). I can save money on everything else, but I
will not save money on food. I actually bought the Zagat Survey Guidebook for Boston
and fully intend to work my way through the majority of it over the four years
that I have here (it would be my personal “101 Things to Eat Before I
Graduate!”)

Hey, we all live 60-70-80 years on this earth, so why not
make the most of what you eat before you get old and cannot eat as heartily as
you can now? Carpe diem, bon appetit!