How I Spent My Sophomore Spring Break by Rachel D. '16

I didn't go to Florida or Cancun, but I still had a lot of fun!

Two weeks ago was our Spring Break at MIT, and the halls of Tetazoo were empty.  The cats were begging for attention for the first time in what seems like forever, as their owners left them for hiking mountains or driving across the country or exploring caves.

Yet I was here, at MIT, preparing myself for the UPOP Spring Team Training Camp.  UPOP, or the Undergraduate Practice Opportunities Program, is a program for sophomores that prepares us for success in the workplace.  Throughout the year, we have obtained guidance, support, and training in our internship searches and in preparation for the summer and the future.  UPOP also holds a week-long program for sophomores during IAP, however, since I trained to be an EMT during IAP, I could not attend the week-long program.  Instead, I attended a three-day program during Spring Break where I worked in a team with an MIT alum as a mentor to work on our teamwork skills.

I really enjoyed working with my team during the week. Our group had seven people in it, one of which I knew prior to the program and five of which became my new friends.  Our mentor was really awesome – she was an alum from the class of ’82, and she had a lot of really great input on our projects and various modules during the program.

UPOP was Monday-Wednesday from 9am-5pm, so it did get a bit tiring, but the coordinators surely kept us off our feet and very involved.  We’d start off each day with announcements, where the coordinators, Bethany and Sharon, would yell “HEY UPOP” and we would yell back “HEY UPOP.” 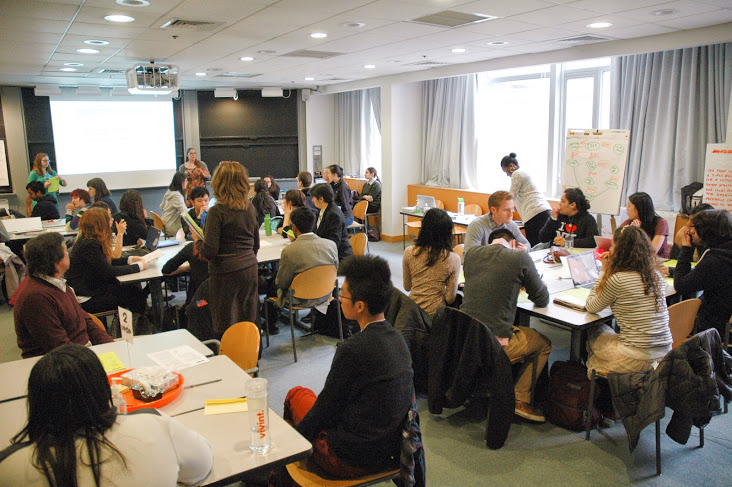 My group is the table in the middle, Table 3.  We named ourselves Team 2048, after the extremely addicting game. We even had a team chant going “Two-Oh-Four-Eight Who do we appreciate? ____” where ____ was either UPOP or the name of our mentor. I think it might have irked some of the other teams a bit, but it made us really happy.

We had a good time working together during the week, and even coordinated our outfits for some events, like for our major presentation on the last day of UPOP. 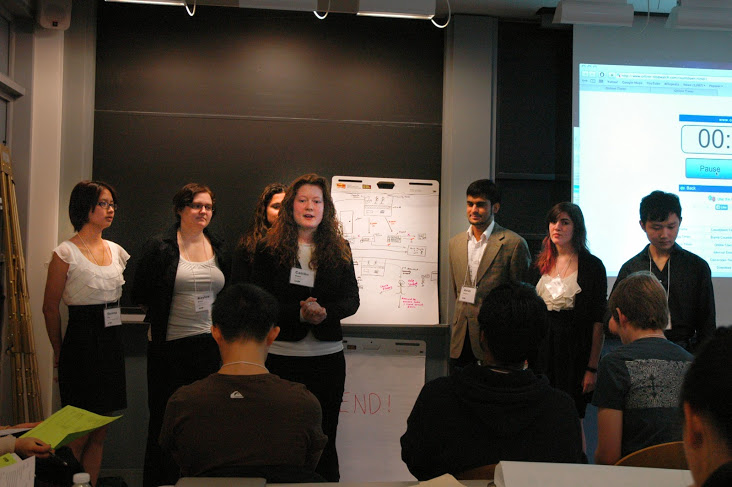 We don’t look very happy in that picture, but we did feel really passionate about what we were presenting about.  We chose to present on the issue of dorm security here at MIT, and about how the current program is inconsistent, and sometimes unfair, across the dormitories.  Last semester, I tried to bring a prefrosh into Simmons hall to see the dining hall, and security stopped me and told me that I was not allowed to enter the building with the prefrosh, even if I was on the guest list and the prefrosh had a non-MIT ID.  Many other people have had similar things happen to them or are experiencing new problems with our outsourced securities systems, and it is causing some distress among MIT students.

Overall, our presentation went really well! We were proud of how we had worked together, and about the final product.  Kaylee B. ’16 is an opinion writer for the Tech, and she might post something in the near future about what we presented on! 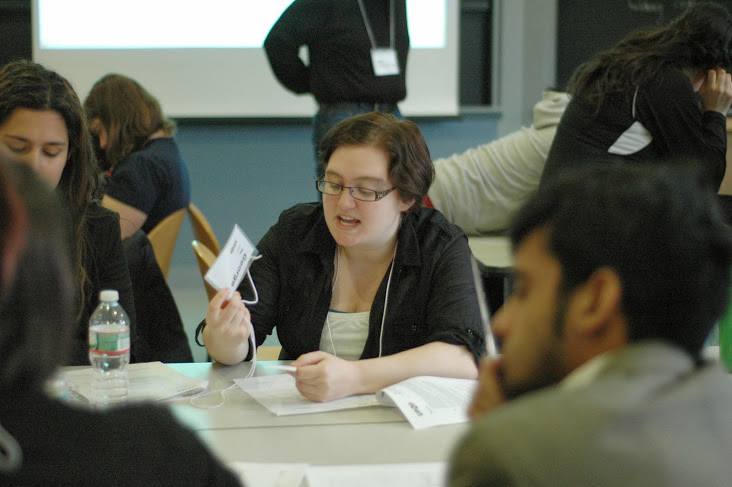 This is my friend Kaylee B. ’16 being very passionate about our discussion.

One of the coolest projects we worked on was creating the tallest building that we could out of foam and pencils.  We had a limited amount of money to buy a limited amount of materials.  The building needed to pass a “tilt test” with a water bottle at the top of it to make sure that it was “earthquake safe.” In the end, our group passed the tilt test, but still lost terribly due to its height.  However, we had the prettiest design!

This is our tower: 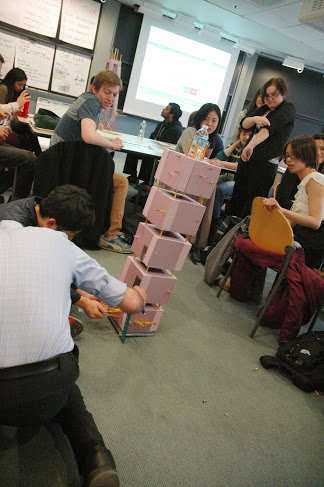 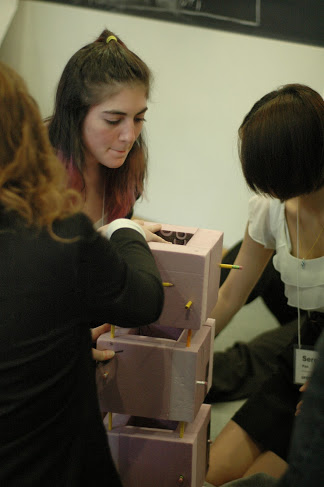 And obtaining those materials wasn’t that easy! 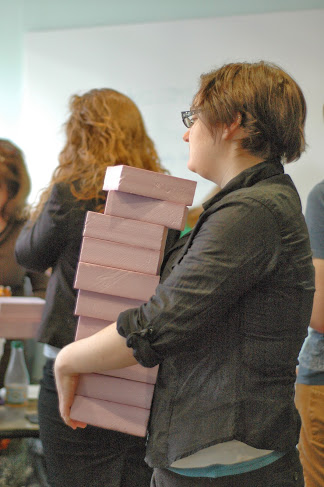 That’s Kaylee B. ’16 helping carry foam over from the store, also known as the Foam Dome and the Cut Hut. 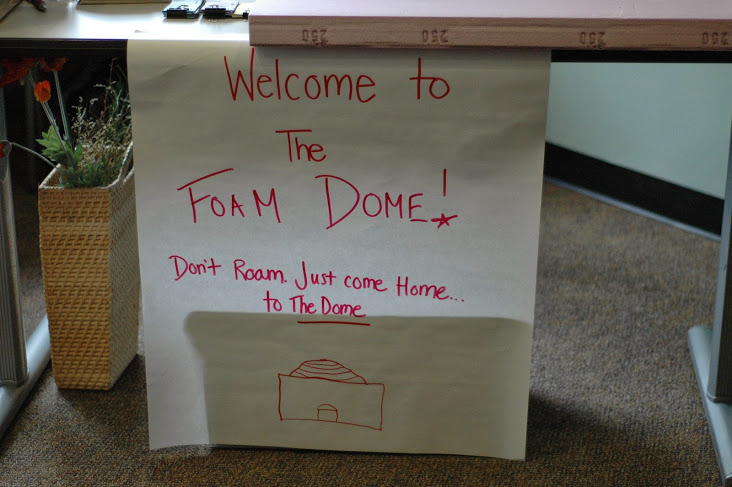 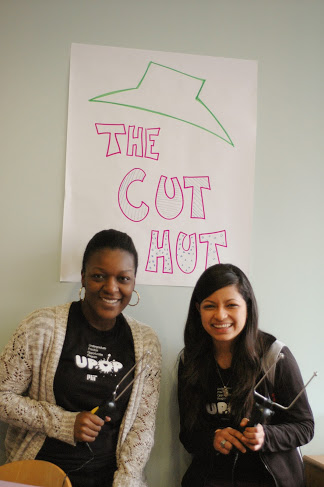 We spent all our money on pencils and foam blocks. 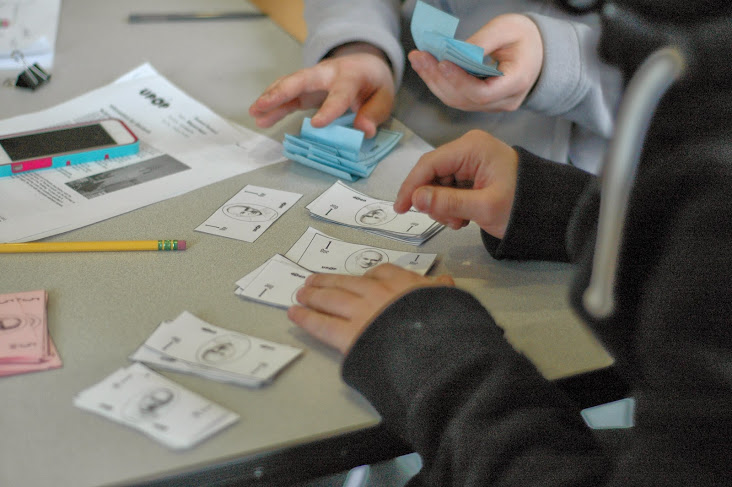 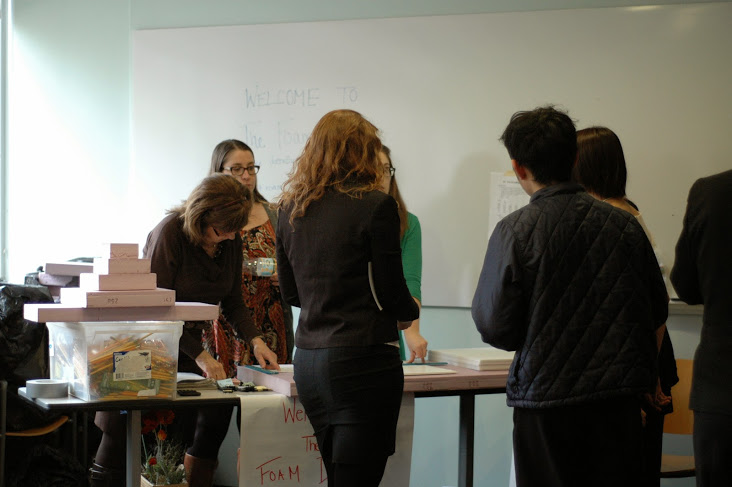 However, we lost in the end to a team with a 70″+ tour.  Even though my team lost, we wanted to show our spirit and how grateful we were for mentor’s help, so after the winning team passed the tilt test we did our team cheer and at the end we yelled “Marissa!”  However, a girl from the winning team yelled “You guys lost!” and laughed at us. I didn’t think it was funny, it was mean. So congrats team four for winning that round, you guys did a great job! Except no congratulations to whoever shouted that. 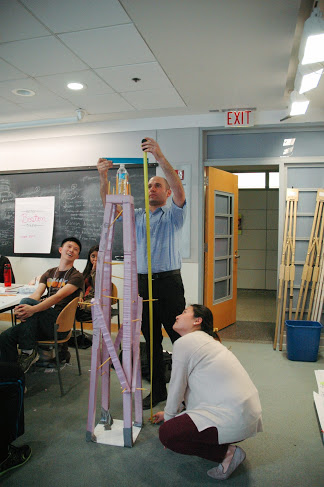 Overall, UPOP was a lot of fun.  I made a lot of really great new friends, and some of them even came back with Kaylee and me to East Campus after the last day of UPOP for a tour of our halls!  Caitlin H. ’16 and Zara P. ’16 liked East Campus, and they also loved the cats, of course! 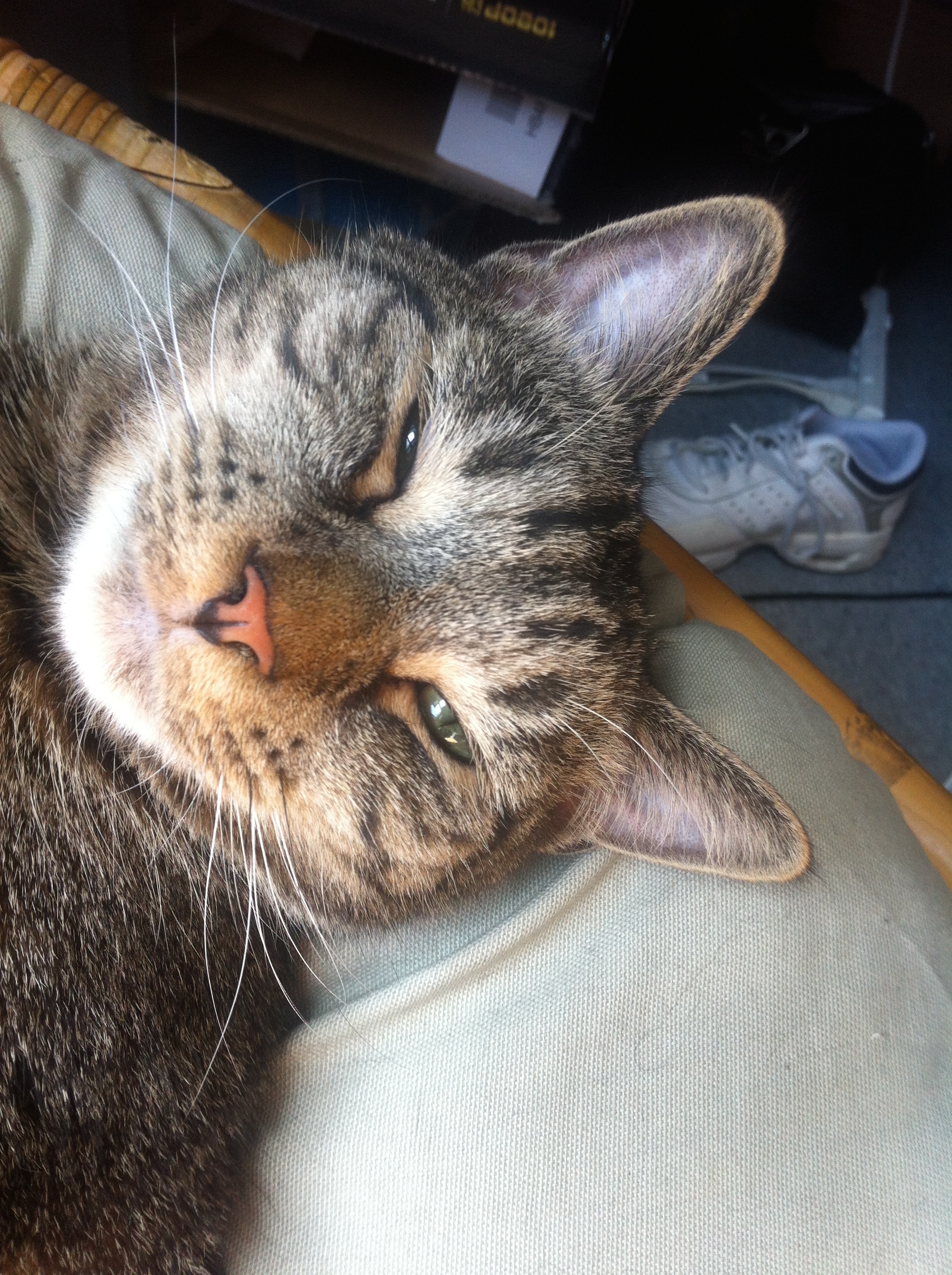 After UPOP was over, I headed back home to New York to see my family, which included my puppy, Boots! 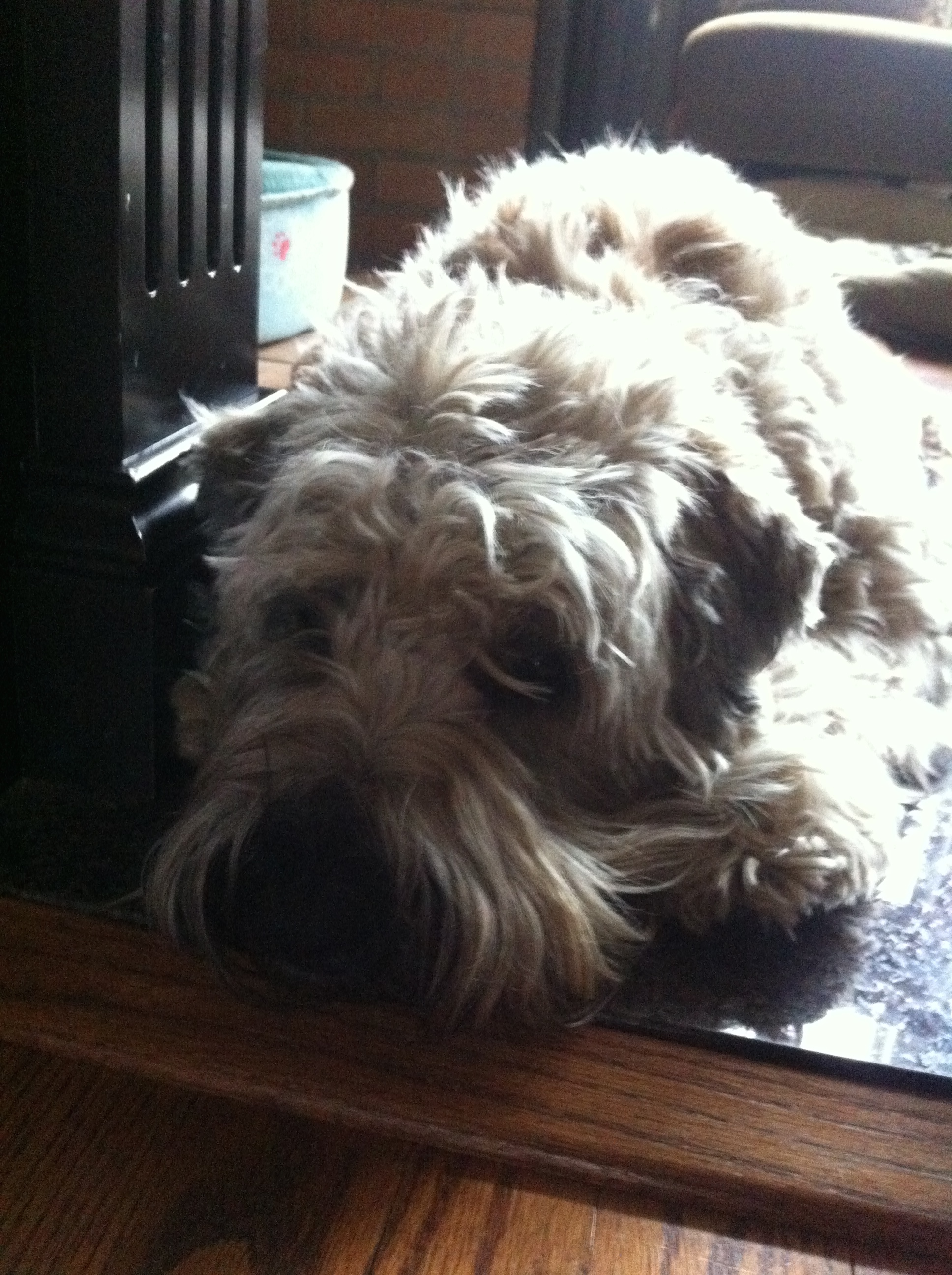 I wished him a happy belated birthday. My little puppy is five years old now!

In celebration of my dad and I becoming certified EMTs this year, my family went out to a really fancy dinner place, Insignia, with some gift cards my mom had received from co-workers during the holiday season.  Insignia was a Sushi Steakhouse, so with me being a vegetarian I was a bit worried that I would be stuck eating fancy salad (even though salad is super yummy).  However, the waitress suggested that I try a “watermelon steak,” and it was so good! 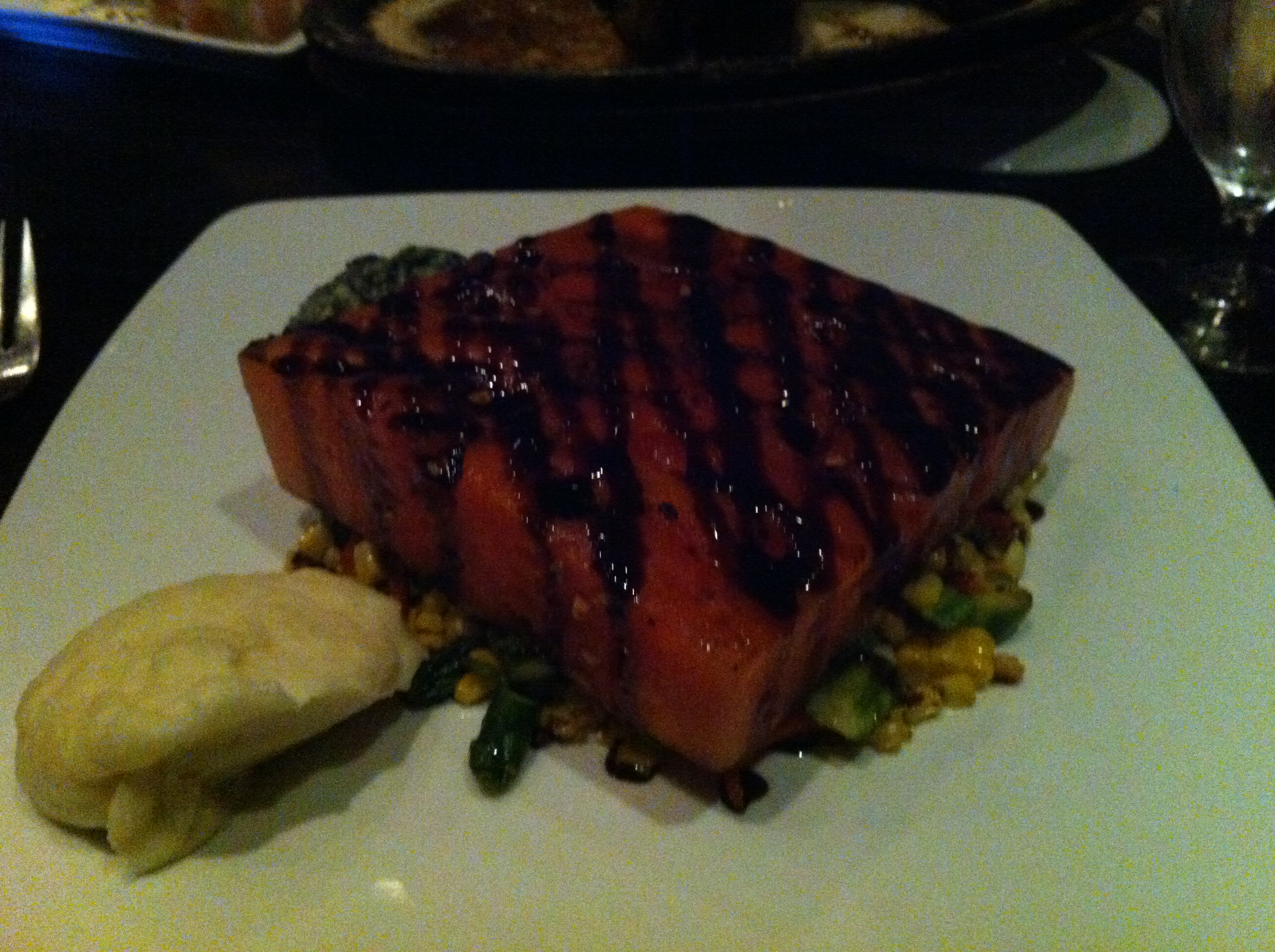 It was one of the strangest and tastiest foods I’ve ever had.  It was grilled watermelon over steamed vegetables with a yummy balsamic-y glaze over the top.  I am definitely going to try it again!

So next time you’re at a barbeque and there’s watermelon, try throwing it on the grill!  Apparently it is a thing!

Overall, I quite enjoyed my spring break. It started off kind of shakey on the weekend, but it was a much needed break from the craziness that is MIT.

And it was a great rest for the cats, who quickly became bored of us as soon as people started returning from their adventurous spring breaks. 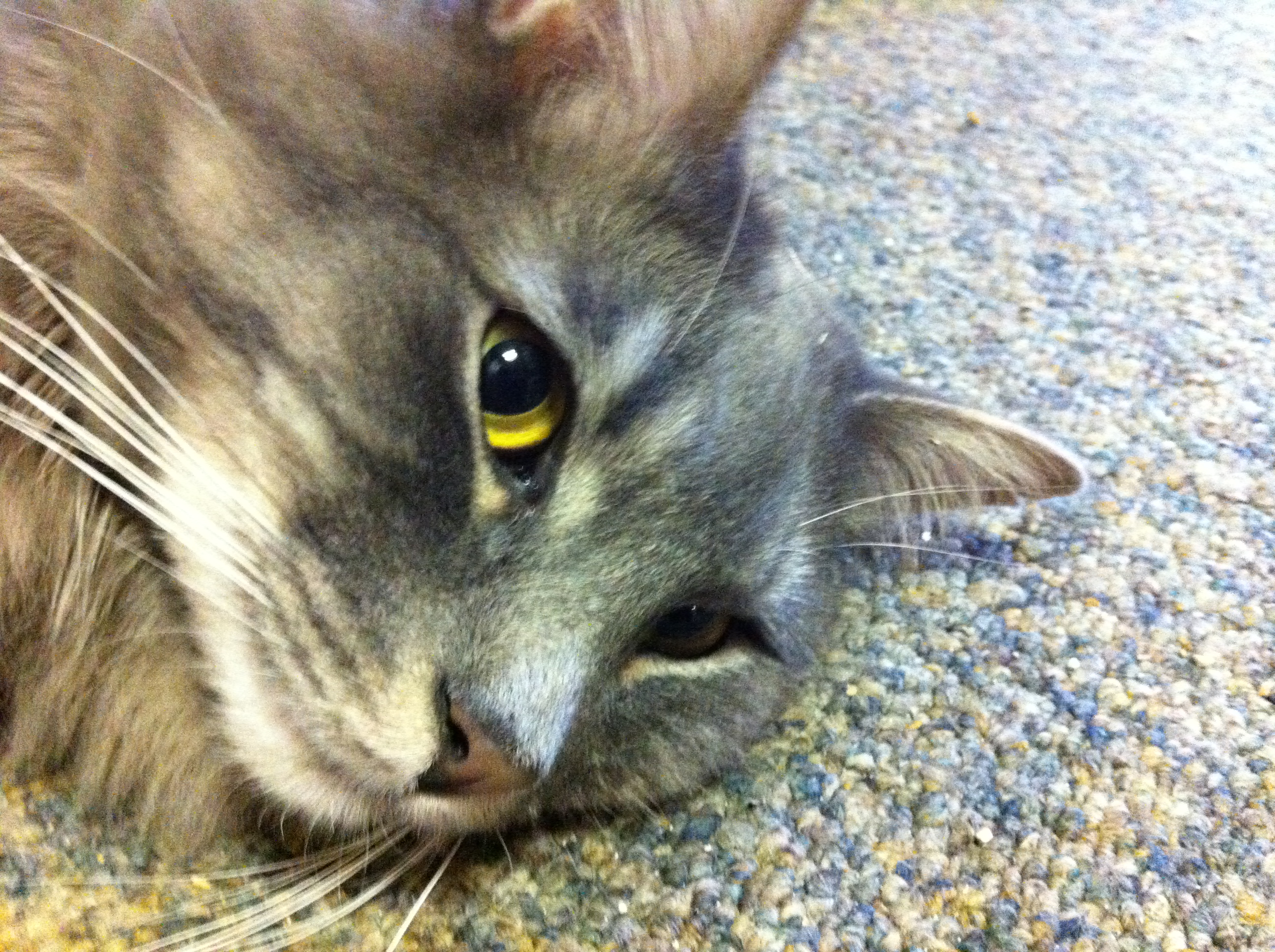 All UPOP pictures were taken by the UPOP Marketing and Communications Officer, Jessica Jones.