Also, I think that making puns about the President is Obaminable.

Bluntly put, this was the worst week of my life.

Geez! you say. That’s a harsh claim. Perhaps you might soften it down until it’s fluffy like a throw pillow*.

Alright: Let’s just say that the week of October 19th left much to be desired. I will elaborate on the details of “much” once I finish therapy.

*Recently, someone I was talking to managed to gently massage this phrase (“fluffy like a throw pillow”) into a conversation of otherwise forgettable nature, by which I mean that I completely forgot the rest of it ten minutes later. I was completely hooked on the colloquial fruitiness of the phrase as soon as it reached my ears, resplendent in its evocations of tacky yet luxurious department-store sofas. Of course, you can barely tell how wonderful of an idiom it makes just from reading my comparatively-dry prose: imagine someone saying it with a gangsta inflection, perhaps in a context that makes absolutely no sense. Like: “Yo, it’s raining so hard, my shoes are fluffy like a throw pillow.” See? Pure, vernacular magic. Anyway, back to how much my week sucked.

Three weeks, 13 Nobel Prizes, my friend’s semi-spontaneous wedding (featuring a hat parade, an Ethiopian feast, vegan carrot cake, and the coolest farm-owning Canadian grandma I’ve ever met on this side of the Mississippi), a trip to NYC, three midterms, two papers, Windows 7, three nights of cooking dinner for 30, 105 miles of running, and a lot of Barack Obama have happened since the last time I blogged. The same amount of time has passed since the last night when I slept more than 6.5 hours. Now that I think about it, I don’t even sleep while I blog, usually.

Fantastic thing about MIT, #261: Sure, you’re miserable on weeks like, say-for-instance-hypothetically-speaking-of-course, October 19-23. On the bright side, it’s the best miserable experience ever. If MIT is the Disneyworld of misery, then I rode all the rides this week and didn’t even have to wait in line. If you asked me about how I felt last week on a scale of 1-10, I would have said negative 15 +/-2. On the other hand, if you’d asked me how I felt about feeling like negative 15 +/-2, I would have given you a solid 9.5 and then offered to adjust my answers if you paid me 20 bucks for taking your survey*.

*Fantastic thing about MIT, #262, is that you quickly learn to not take surveys unless there’s a predicted payoff of at least $10, with exceptions for course evaluation surveys that give you free excuses to complain about your life. If I’m not mistaken, there was a 3.091 class survey last year that automatically deposited $15 into the TechCash account of every student that participated (and there’s 500-600 people enrolled in 3.091). 15 bucks! I could have bought 1/15th of the class textbook with that fortune!

Anyway, back to my misery. It was rhythmic. I woke up every morning at 7 am dressed in a fresh layer of panic, bolted outside in 40-degree wind chill, ran several miles, made breakfast and French-pressed coffee, went to school, did work, went home, did work, went to my Black Studies class and talked about the Black Panthers, did work, went to 8.07, worked on 8.07 in the basement of the library, went home, roasted chickpeas and cauliflower, did work, socialized, went to bed, repeat five times and jump to coda.

Over the torturous course of the Week from Heck (am I allowed to say this on the blogs, Matt?), I sludged through oodles of problems. Problems involving relativistic point charges, floating blocks oscillating underneath a dripping faucet, magnetic dipole radiation, proper time in an accelerating reference frame, the Maxwell Stress Tensor (stress makes me tense too! I need to stop making this pun until I pass 8.07), and electron/positron pair formation. But never did I satisfactorily solve the deeper problem of why I cared. Perhaps I never will, but let me tell you what I’ve figured out so far:

Insight is indistinguishable from imagination. Like all alliterative statements, this is probably profound. Take the example of a mass on a (massless, frictionless) spring. You compress it. In Soviet Russia, spring compresses you! By which I mean that it oscillates. A hummingbird of energy hovers in the liminal space between opposing forces, lingering persistently. 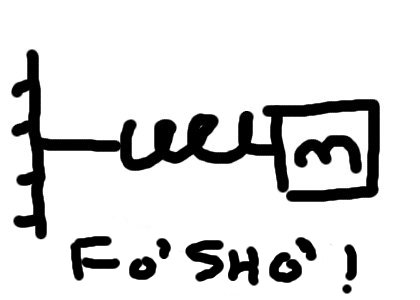 You imagine a metaphor for your spring. It’s a metaphor that looks like this: 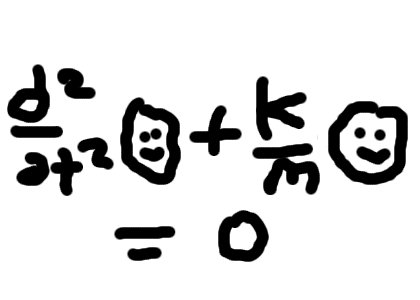 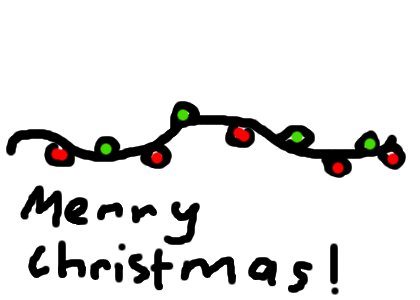 (If you’ve ever tried untangling one of these, you know what I mean by infinite.)

Like all reasonable things, your string of infinite springs despise second derivatives. Gently you pluck a second derivative into its limber form, and it responds with a violent, burning hatred for you and all your posterity. In Soviet Russia, string second-derivates you! By which I mean that it snaps back with a second derivative in time. You pull out your pencil and scratch out a new metaphor: 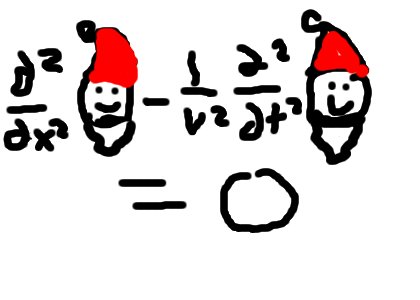 After twisting your imagination up a ladder of metaphors, the waves rippling along the string become rays of light propagating through space at 3*10^8 m/s. 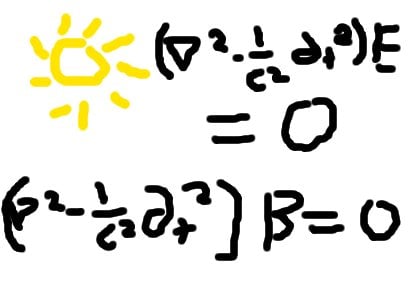 Somehow, in the grind of a pencil on paper, you’ve crystallized the subtleties of energy.

In truth, the process of squeezing a physics problem through layers of abstraction is a frolic in playgrounds of tedium. Which is why I had a great week, even though it was terrible.

On a happier note, did I mention that I went to New York City for an all-expenses-paid 23-hour field trip with my Black Studies class? Legitimately speaking, my homework was walking around Harlem, eating soul food, appreciating Black Panther art, visiting the African Burial Grounds, downing a plate of conch at a Haitian diner, and sitting through a production of Hair. Fantastic. It was a journey of self-discovery in the sense that I uncovered a secret fondness for plantains. 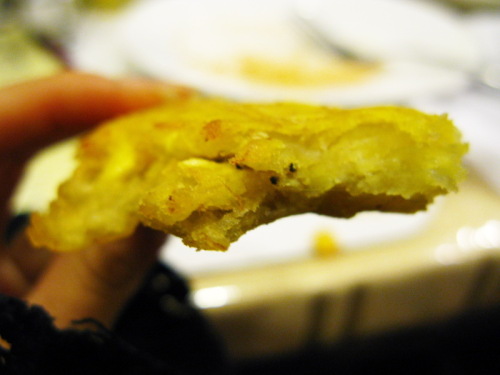 I attempted to become a critically-acclaimed street photographer in the meantime. The first step to a Pulitzer is to set your camera to greyscale. 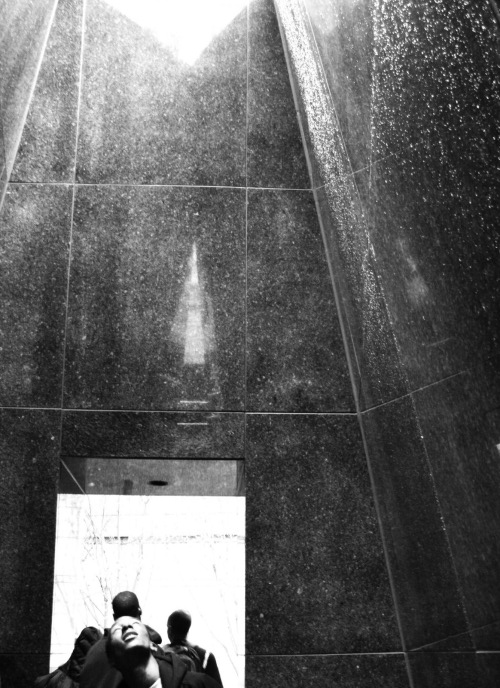 (At the African Burial Grounds, where a student pays respect to the history of African Americans in New York by, um, looking up. I guess.) 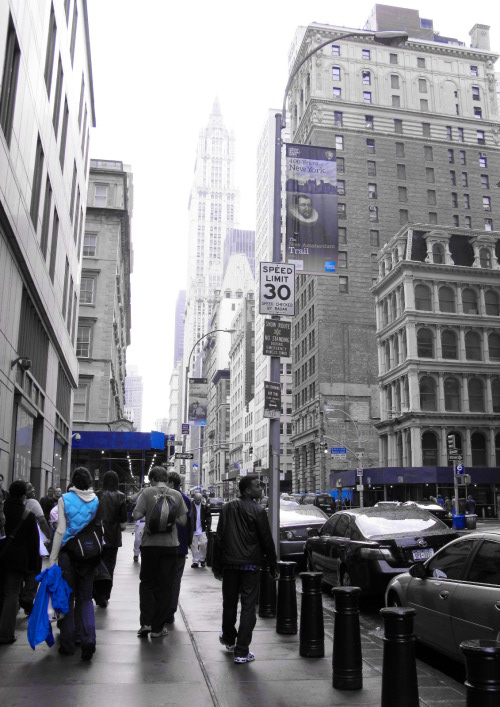 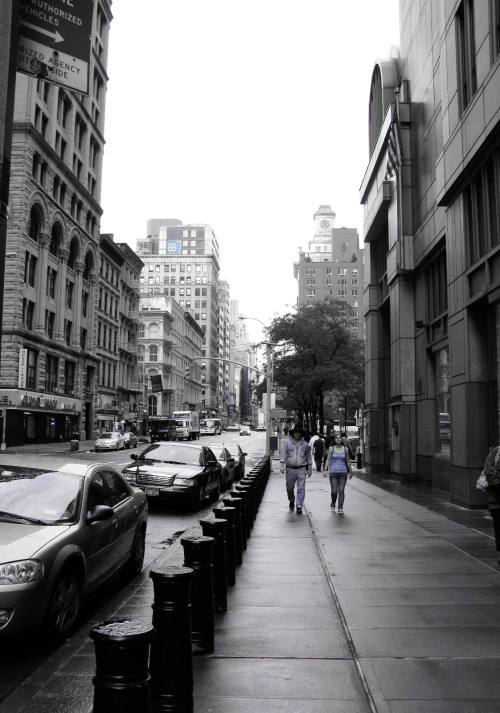 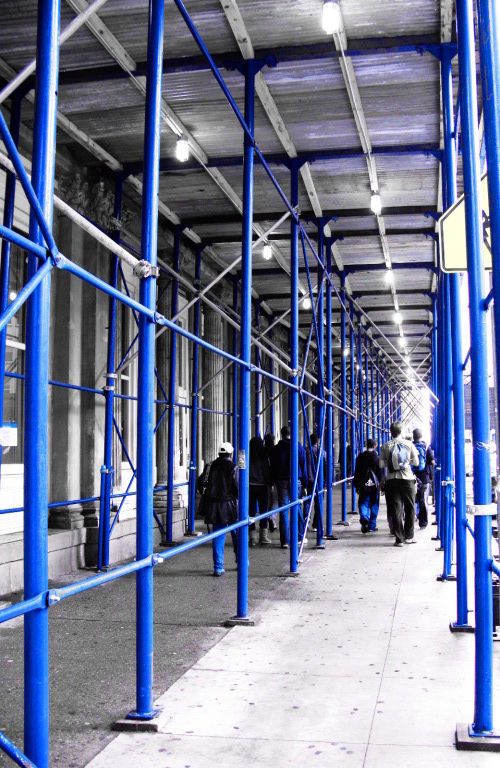 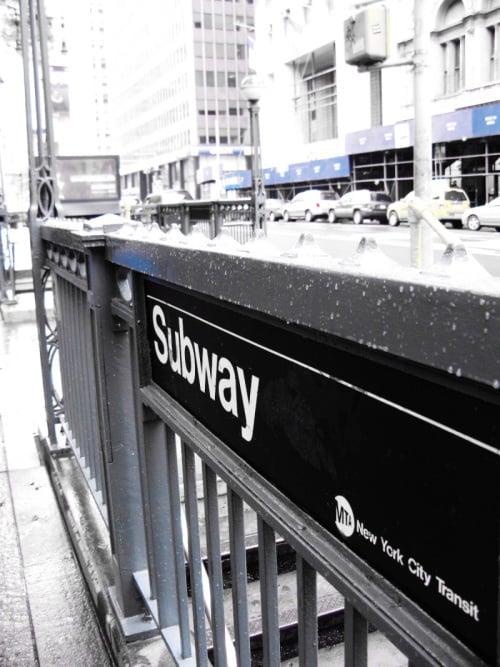 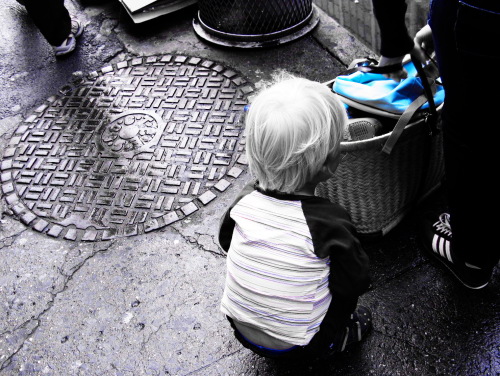 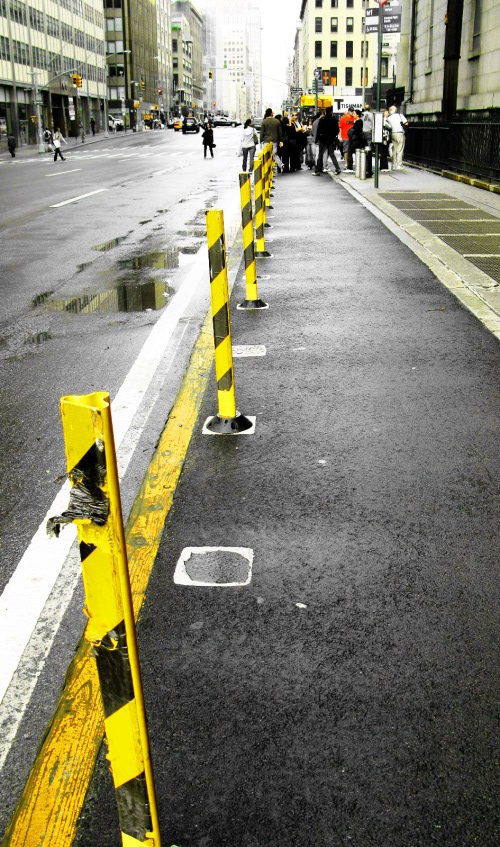 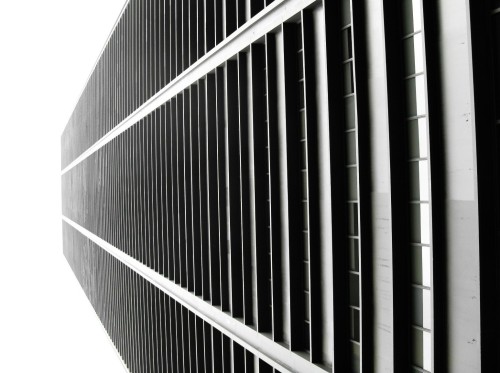 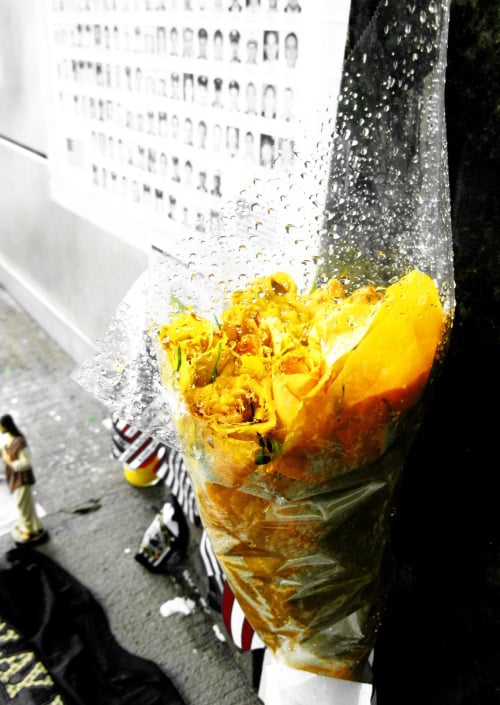 The ironic part is that I tried to make this entry sound angsty, but it ended up being fluffy like a throw pillow.

39 responses to “I had a terrible week”