It's sortof hard to believe it's time for this already. 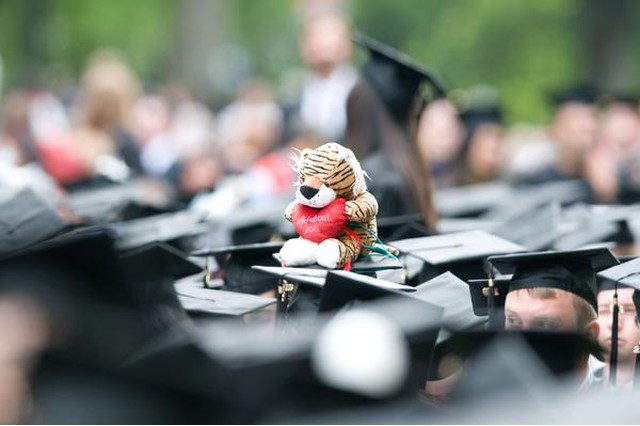 My family came into town on Wednesday for graduation. Classes were over, and the most stressful thing I had to deal with was cleaning my room. It was pretty relaxing. I didn’t even have to rush around Boston saying goodbye to people and places that I’ve known, because I’m staying for another year to finish my Master’s degree (through the MEng/VI-A programs).

Since I am going to around for another year, I saw the graduation ceremony as more of a check-point than a finish line. I also think that attending MIT has had a side-effect of keeping me from getting too excited about ceremonies in general. After four years of urgent deadlines (Test! Lab of Doom! 4 PSETS! 2 Tests!), I seem to have adjusted some internal excit-o-meter. So in the days leading up to graduation I was glad, but not super-excited.

The big day came. Every senior gets four tickets to give to friends or family for graduation, and I was using my four for my family. This meant that my boyfriend (who is class of ’08) couldn’t come see me graduate in person. I did the next best thing to bringing him, and brought Roary instead. 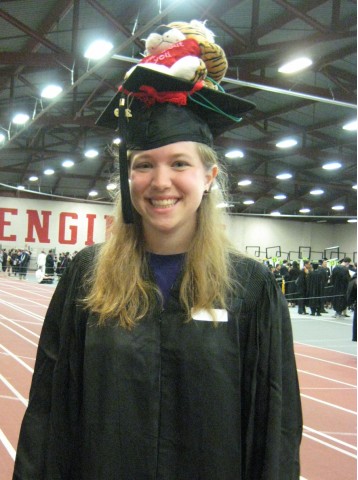 Roary is the stuffed tiger that my boyfriend gave me on our first Valentine’s Day together. I attached him to my mortarboard using a strip of cloth and a couple of alligator clips. I used the alligator clips because they were the first thing to come to hand, but after I was finished I realized that it was also a nice nod to Course 6. Tiffany ’09 took the picture above for me. The first picture in this post and the rest to follow are courtesy of the Tech photographers (who have more similar pics here.)

All the graduates-to-be congregated in the Johnson Athletic Center and sorted out who they would walk next to. Then we processed to Killian Court where our friends and families waited for us. 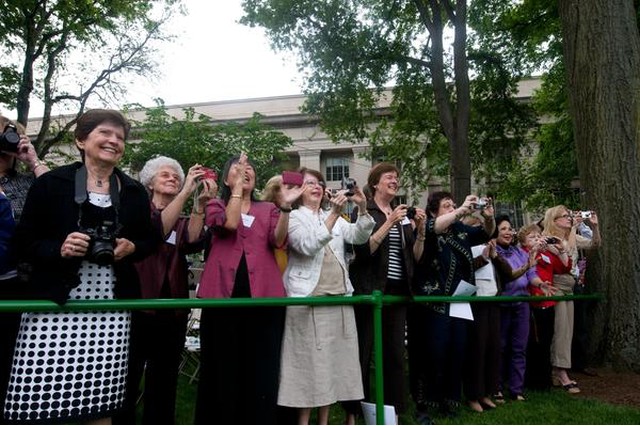 Once we were actually all together walking towards Killian, it started to sink in that we were really graduating and I started getting excited about it. As we passed some of the buildings, I saw a sign hanging from a window and half a dozen people leaning out and waving at us. The sign said, “Congratulations Course 1 Grads!” and the people waving seemed to be their professors. 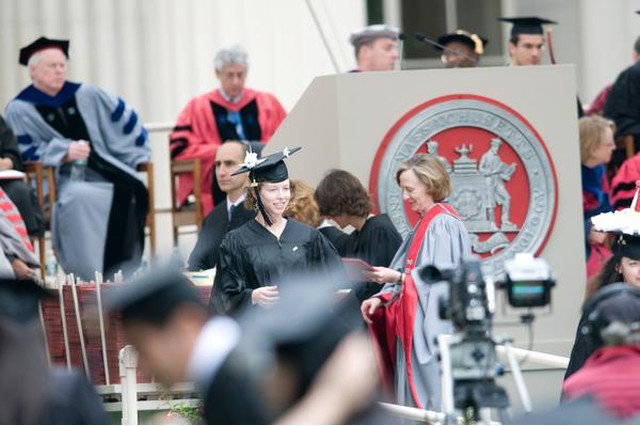 The ceremony itself was nice. There were a lot of people graduating though, and I eventually found myself looking around for other decorated mortarboards. I didn’t have my camera on me, but I’ve pulled some pictures from The Tech of interesting ones. I think the aero-astro majors had the highest percentage of grads with decorated caps. 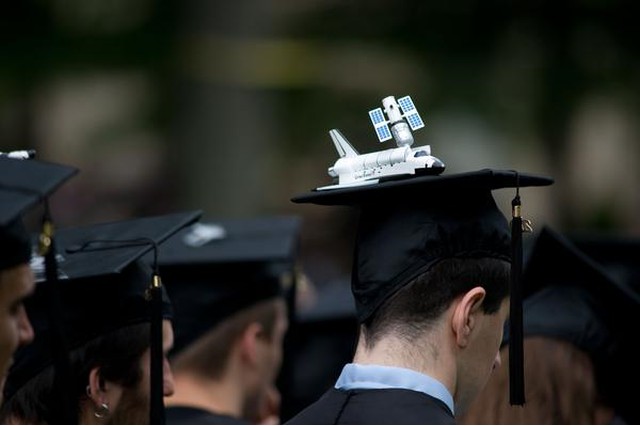 Some people wore stoles with the colors of their country or region. 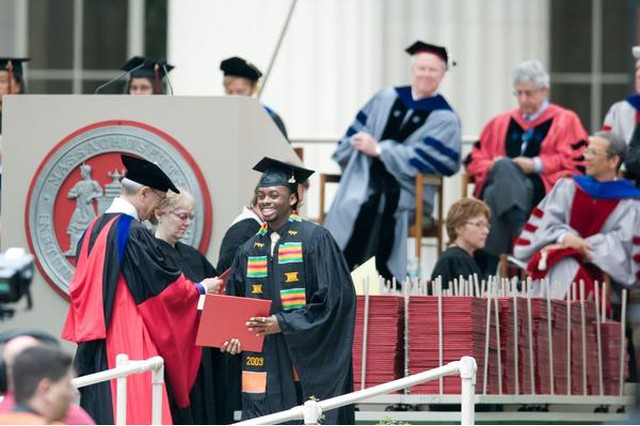 A friend of mine actually substituted the cap out entirely for a black cowboy hat (he attached the tassel to the brim.)
I’m not sure about the significance of this next one… 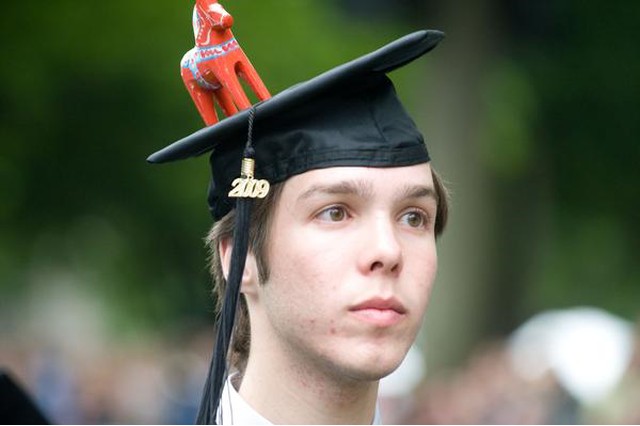 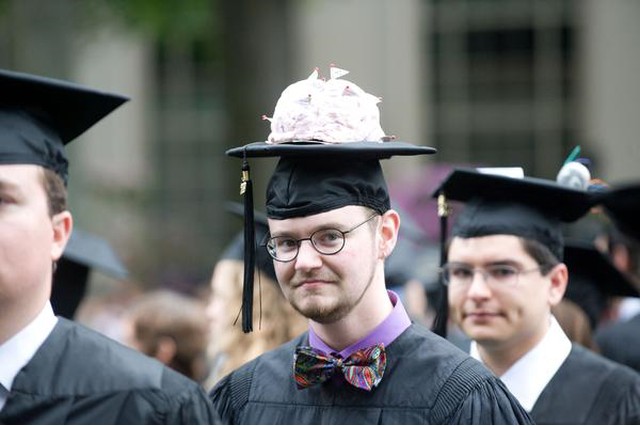 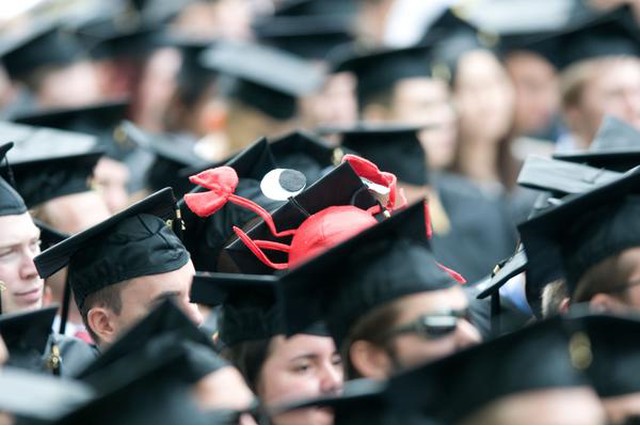 We heard speeches by the Governor of Massachusetts and MIT’s President. After the speech by our Class President, we got to turn our “Brass Rats” (class rings) in the opposite direction. Before graduating, we wear the rings so that we can see an image of the Boston skyline when we look at them. This is supposed to remind us that we’ll get through MIT eventually and go out into the world. Once we’ve graduated, we wear the rings so that we see an image of the MIT skyline. This is so that we can look back on the good times we had at MIT.

Part way through the ceremony, some people broke out half a dozen beach balls and started them bouncing around the student section. The reappeared later, presumably when people were bored. 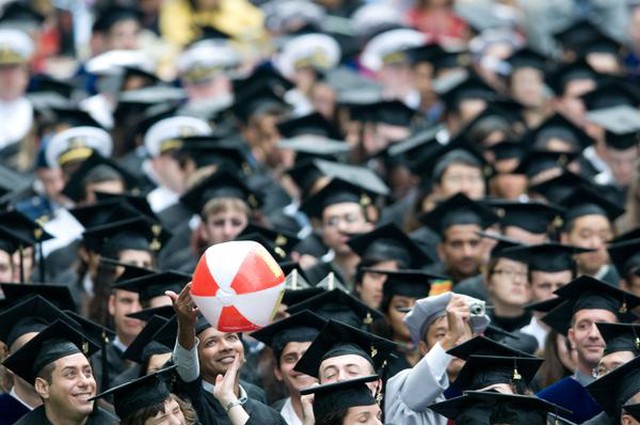 Eventually it was my turn to walk. I was slightly worried about walking with the tiger on my head (since it had a high center of mass) but all went well. President Hockfield even complimented me on it as she shook my hand!

After the ceremony, I met up with my family and we went to a couple of receptions for graduating students, complete with delicious food.

And that’s it. I’m graduated. Weird.

23 responses to “I put on my robe and graduation hat”