This is an entry about IAP. IAP is the month of January. It's...February. I know.

(I’m gonna go ahead and spill the beans: This is an entry about IAP. IAP is another name of the month of January. Some people may be quick to point out that we are in the month of Feburary. These are the kinds of people who may also like to point out that I haven’t blogged in like two months, Santa isn’t real, and eating ice cream and shredded cheese for dinner tonight was a really bad idea.)(These people may also be my stomach.)

(Also, to those who note that it’s taken me a while to post again – WE’RE IN A RECESSION, PEOPLE.)(Actually, I really didn’t post this for a while because I went to Hawaii.. oh, I know. Life is just so hard.)

I later came to realize the mystery bag was just a paper bag filled with useless crap they couldn’t otherwise sell, like Hello Kitty erasers, Keropi compact mirrors and, oh, I don’t know, Pochacco beard trimmers, and it wasn’t like I was even growing a beard at that time, and yeah, we probably paid more for the bag than the erasers/trash cans/beard trimmers were worth combined, but it didn’t matter. It was all worth it to me for the element of surprise.

Fast forward twelveish years later to IAP 2009. IAP is a pretty magical time; it’s one month in the middle of the school year filled with possibilities. IAP is the mystery bag of the Sanrio store that is MIT (but with less beard trimmers). You can take actual classes – some even extend from the fall term through January – or you can take crash courses in pottery, truffle making, and Perl. You can do all those things you wanted to do during the school year that you didn’t quite get to because you were working. You can even go somewhere else (WHAT? WHERE). Plus, the fact that you don’t have class until February is pretty fun to rub in the faces of your suffering friends at other schools.

And so one weekend Kes ’11, Dordy ’12, Cathy ’10, and I embarked on an adventure that would change the course of history. It started, as most adventures do, with the hunt for food. Unfortunately, this one involved less spears and loincloths and more hiking over the slushy Harvard bridge in 20 degree weather. (It ended, as only a small fraction of adventures do, with an igloo.) Since that’s a moderately warm temperature for winter around these parts, here’s a tip for you when you make the trip out to Boston: if you are going to walk across the Harvard bridge, wear rainboots up to your elbows. For serious – that bridge was the consistency of an icee two hours after you bought it and forgot about it. If you take only one thing away from this entry, it should be that. And that you can see your breath in igloos. But more on igloos later.

We ended up at a small French restaurant behind the Prudential Center that Cathy had been wanting to try for a while. Naturally, this meant that we all had to speak in French accents, and make French faces, and don French attire: 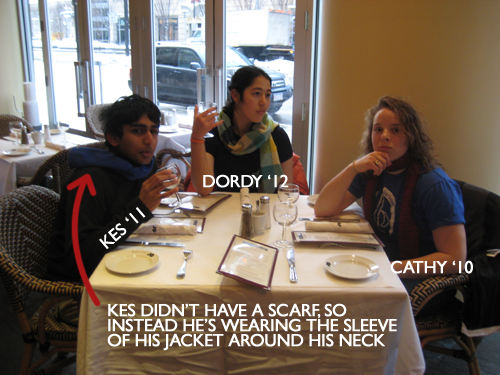 No, don’t ask why. No, we never do this when dining at Thai or Italian restaurants, but somehow, it just happened. Also, as four college students trudging in from a trip over a bridge that could only be described by the word “soupy”, we were clearly not classy enough for this place, and thus made every effort to class ourselves – and our meal – up. 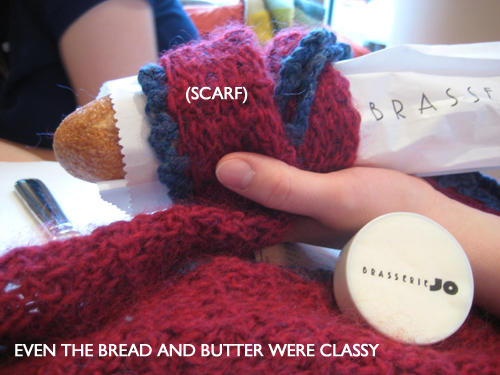 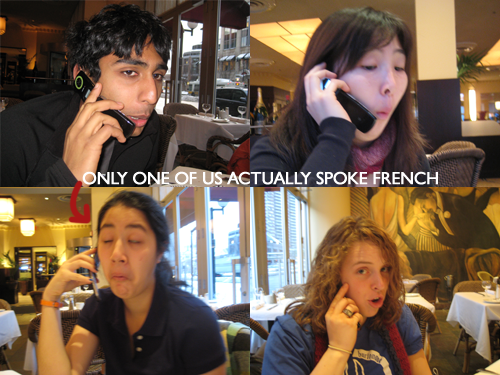 After wandering around various places throughout Boston and avoiding a soggy return home by taking Saferide back to campus, then deciding to ride an entire Saferide loop and play a couple rounds of Euchre, we ended up at the igloo. This was not your grandmother’s igloo. This was one epic igloo. How epic? 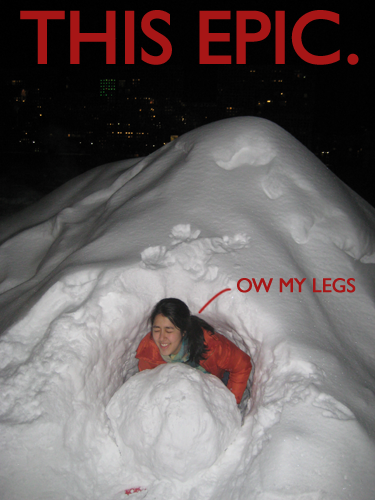 So epic, it even came with a logbook. What’d I tell you? Not your grandmother’s igloo. 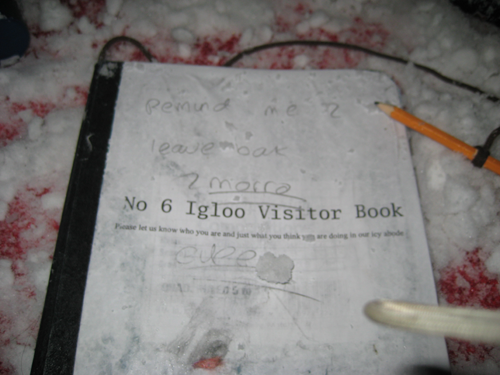 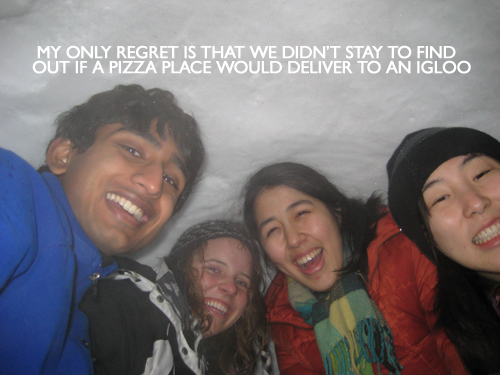 Eventually, though, as all adventures ending in an igloo do, this story ended with us freezing to horrible, horrible deaths. No, not really. We almost did, though: the igloo was blocked by a giant snow boulder that required significant effort to move: 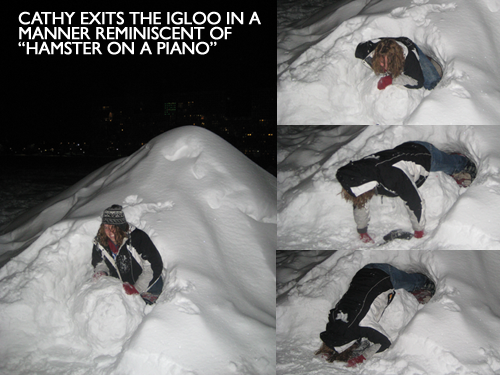 We returned home mostly victorious, minus the various digits lost to frostbite. It was a tale for the ages. It was one to tell the children’s children. Who knows? By that time, I’ll probably even have a beard to trim.

39 responses to “IAP and Igloos”