also: the unification of course 7

MIT is going through changes right now in addition to the new phase of the CUP first-year experiment. Here are two that actually affect me.

We are within throwing distance of Commencement 2019, in which most of the people who got here in September 2015 will be graduating. The occasion is scheduled for June 7, as it is traditional for MIT commencement to occur around the first week of June.

The late commencement date is pretty cool for a few reasons: IAP feels longer since we don’t have to register for spring semester until the first week of February, we get a 4-day weekend for Patriots’ Day, and all the other schools in the area Commence earlier so that your interaction with Harvard parents in public spaces is minimized.

However, graduating on June 8 means you have to move out of the dorm on June 9, and into… somewhere that lets you sign a lease starting in the middle of a month? Or maybe you live off campus, and the place you’re in wants you to pay a whole month’s rent when you only need it for another week. And maybe you were planning on doing an internship or starting a job immediately after graduating (such is society), but those are also the kinds of things that tend to kick off around the first of the month.

The howevers here (which all are more legitimate points than I don’t want to have to stand in line at Flour with Remington J. Halliburton V and Alexander Q. Raytheon III⁠01 These are jokes made in the spirit of playful rivalry! Please don't blacklist me Mr. Corporation! I need a job! ) have led to the generally favorable administrative decision⁠02 This feels like an oxymoron at this point to move commencement to the week of Memorial Day, which is the last Monday of May.

My mom is already trying to buy plane tickets.

Every Course⁠03 You call it <del>corn</del> major, we call it <del>maize</del> course at MIT requires the completion of two⁠04 You can take more than two if you want classes that are communication intensive,⁠05 Usually meaning that you write papers or do presentations and then have to meet with a communication instructor for feedback so you can improve on the next paper or presentation or CI-Ms. These are similar to CI-Hs, which are the two⁠06 Again, you can take more than two if you want communication intensive HASS⁠07 Humanities, Arts, Social Sciences classes that you are required to take. The difference is that most people⁠08 There are always plenty of people who do both of these freshman year, or on the other end of the spectrum, people who put off their last CI-H for freshman year because they want to take CI-Ms earlier take their CI-Hs freshman and sophomore years, and most people take their CI-Ms their junior and senior years when they actually have declared their majors and have taken classes to give them background knowledge to complete a CI-M. You have to finish at least one CI class per academic year.

7.18 is a behemoth 30- unit⁠09 At MIT, 1 unit=1 hour of in-class and out of class work per week CI-M in which you perform research and write what is essentially an undergrad thesis. This and the 18-unit 7.02 Intro to Experimentation and Communication in Biology were the required CI-Ms for course 7 until recently. In order to take 7.18, you must have taken 7.06 Cell Biology (which has 7.03 Genetics and 7.05 Biochemistry as prereqs, which have 7.01x Intro Biology and 5.12 Organic Chemistry I as prereqs, which has 5.11x/3.091 Intro Chemistry as a prereq) and also have completed a 12-unit UROP/non-credit equivalent in an MIT biology lab. The department does not set up UROPs for you, and they won’t pair you to a lab. Couple these requirements with a 30 hour per week (that’s 6 hours per school day) expected time commitment for a single class, and you’ve got a major that will scare away even the most curious biology hobbyist. Taking 7.18 requires a good deal of planning and class-passing⁠10 This is not to disparage the planners and class-passers; most course 7s I know of actually have cohesive projects that they have been working on for a long time and respect the 30 units of credit that they get for pursuing their passions that doesn’t come naturally to most people. For example, I am taking 7.06 this semester, so I would only be able to take 7.18 next semester when I am likely applying for grad school and should not be spending 6 hours (or more!) in lab working on a project that would have looked better on my grad school apps had I completed it earlier.

I took 7.02, so I know just how much time that class took. I am happy that these changes have been made. It did, however, make things a little difficult for me last week when I was trying to get my double major⁠11 On my way! to a CMS major form signed. I already had to change the graduation date from 6/2020 to 5/2020. I took my form to the bio department to sign on Tuesday, then on Wednesday they emailed out about how everyone who is 7A will just be a 7 from now on, so when I got my form I had to cross out 7A in the primary major spot.

If you’re interested, you can find all the required classes for the bio major here (and if you click some of the stuff on the left you can find the requirements for other majors but why click on those when you can be a bio major). Here are the biology restricted electives of which you pick at least 3: 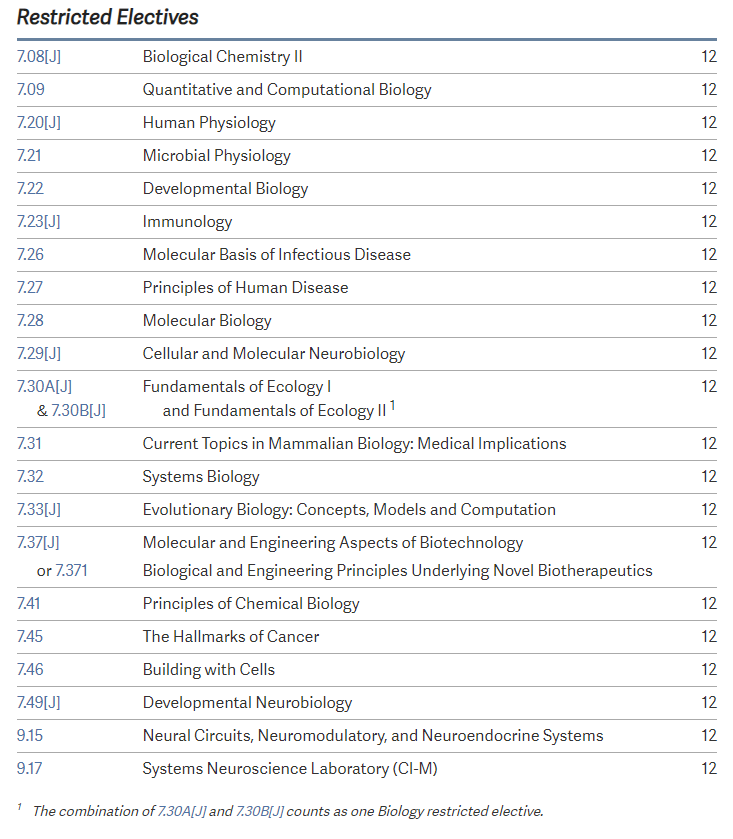 They’re all good options! Be a course 7!