Tomorrow morning I fly back to MIT, and I’m writing to you with absolutely no feeling in the lower left-hand quadrant of my face. It’s as if all the feeling there decided to concurrently take a few hours off to siesta, and have left me to use only my eyebrows for expressions (I don’t have very expressive eyebrows; for the past half hour I’ve been mostly looking either surprised or confused). I just got back from the dentist, because even though there are dentists at MIT Medical that are covered by student insurance, I have not gone since last year, since there is little else I love more than lying there digging my nails into my palm trying not to scream. It’s not the drill – I have about as much tolerance for oral pain as the next guy – it’s my active imagination that really gets me in the dentist’s chair.

Inevitably after they’ve numbed one or both of the bottom quadrants of my face, the dentist leans over and does some stuff in my mouth that I can NO LONGER FEEL. It’s at this point that it occurs to me that Dentist and Nurse are probably involved in some kind of elaborate hoax in which they put tubes and drills and silver poking tools in my mouth, but aren’t actually doing anything.

(in my head)
DENTIST: (secretly communicating with Nurse by morse code) Hahah! She thinks she’s getting that cavity filled when all we’re doing is HOLDING THIS SUCTION TUBE AND MOVING IT AROUND!
NURSE: We’re BRILLIANT! Here, pass me that plastic purple gun that is actually used for ear piercings.
ME: Wow, I’m sure glad they’re fixing all my teeth and not actually creating a huge waste of time!

As of yet, this has not occurred (as far as I can tell). Inventing preposterous hypothetical situation amongst ordinary days, however, is just one of many things I have done in during my summer here in the beautiful Bay Area. (As well as chewing on my tongue, which I also cannot feel.)

This year, as opposed to last year when I was a freshman, my summer also consisted of: 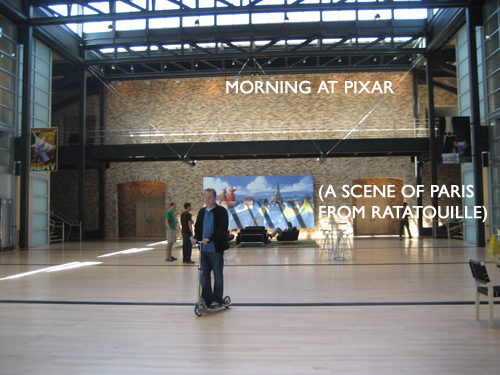 I started out the summer working as a production assistant at Pixar. That means I was mostly at my desk every day, but got to deliver things whilst riding around the foyer and in between departments on a scooter. About a month into summer, shortly after the release of Ratatouille, I finished archiving film reels with the post-production department and headed off to instead both work at the Apple Store and volunteer at an emergency room in San Francisco. I had been at my other two jobs for about a week when one of the sound editors called my cell phone to ask if I had seen his scooter around anywhere, to which I answered shiftily, “…er… no.”

(I really didn’t steal his scooter. I did, however, take a really excellent Dory pinata from the free pile outside the animators’ offices.) 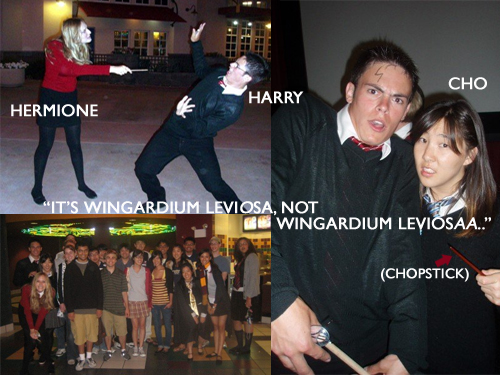 I wouldn’t consider myself a serious Harry Potter fanatic – at least, not compared to some people – and I’d never gone to see the opening of the movies at midnight, or been to a book party, or even dressed up as a non-Muggle. I figured it was my last shot (for the book, anyway), so for the movie my buddies and I dressed up (we didn’t go as far as to wait in line – another friend of ours, a TRUE fan, saved our spots for 12 hours) and ended up winning the costume contest. When the book premiered, Praxy ’10 and I went to Barnes and Noble at midnight to see if we could get a copy just by being there after bypassing people who’d been there since 2 PM; after an hour of reading chemistry books, we decided to go home and sleep. (We ended up getting our copies from Costco the next morning, like civilized people.) 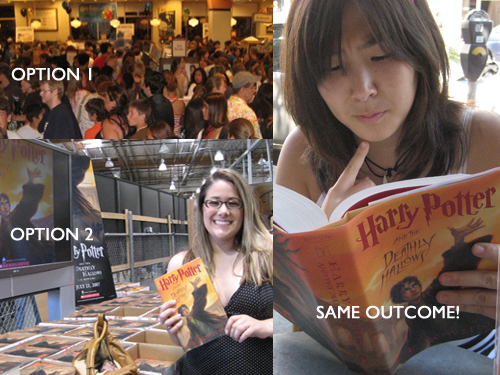 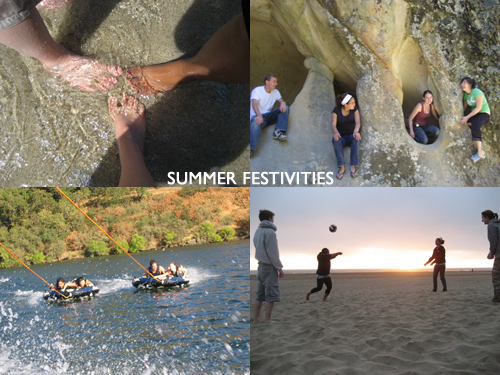 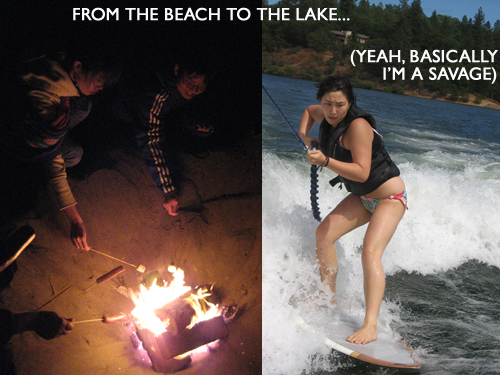 From watching the Perseid meteor shower go by from a moonlight boulder on top of a mountain, to making s’mores on a bonfire on the beach; from learning to wakesurf to rock climbing to celebrating the most epic birthday ever – it was amazing to see all my friends from high school again. The best parts were not in crashing and bruising on waves going 30 miles per hour on an inner tube, but in the quiet moments when we’d share our memories from schools all around the country. Also it’s weird how people you haven’t seen in months sometimes grow beards. (“I just had to. It’s one of those things you have to do. Like girls can have babies, and guys can grow beards. It’s kind of like makeup, except grosser.. and it’s free!” -my friend Nick, on his newly furry face)

Tomorrow, it’s back to numbers, p-sets, and late-night pasta dinners; tomorrow, my face will regain consciousness. (Hopefully. If I’m not smiling when you see me next, it’s not because I don’t like you, it’s because my nerves are deader than Harry Potter’s parents.)

32 responses to “I’m Shipping Up to Boston”