January in Paris by Anelise N. '19

and two weeks of speaking French 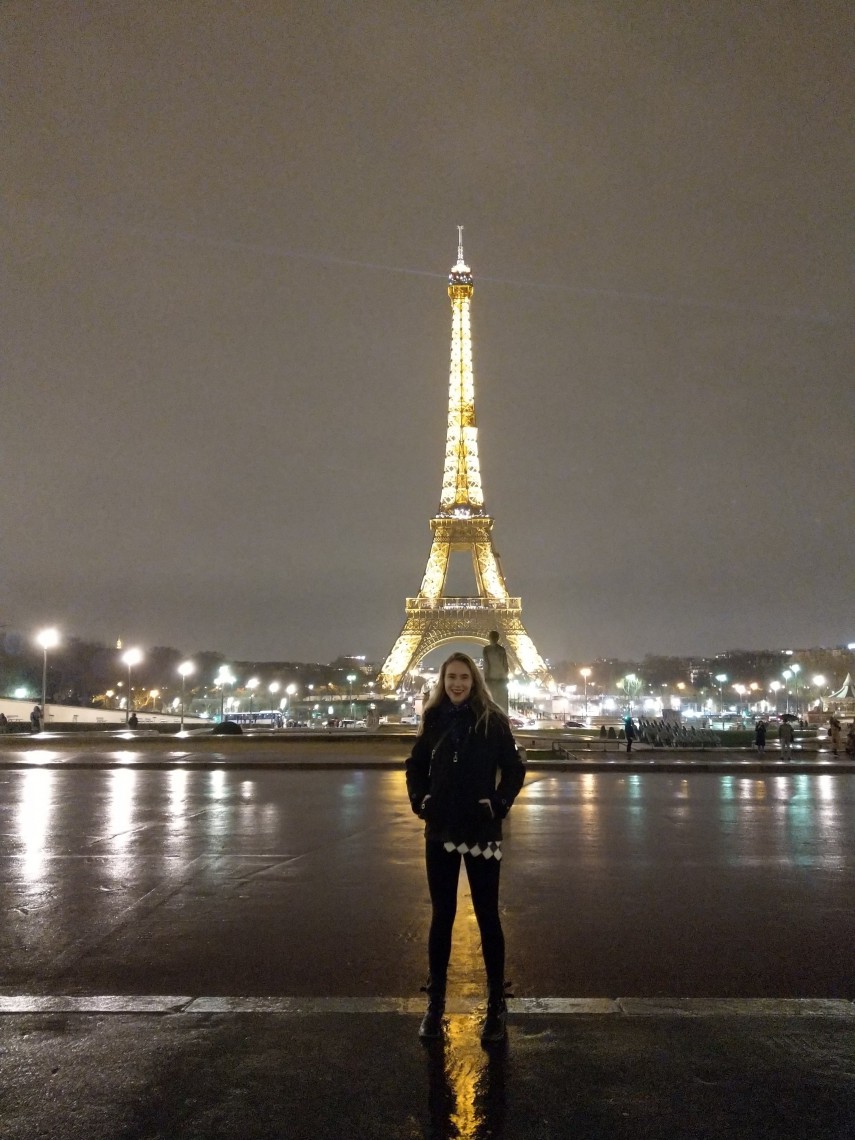 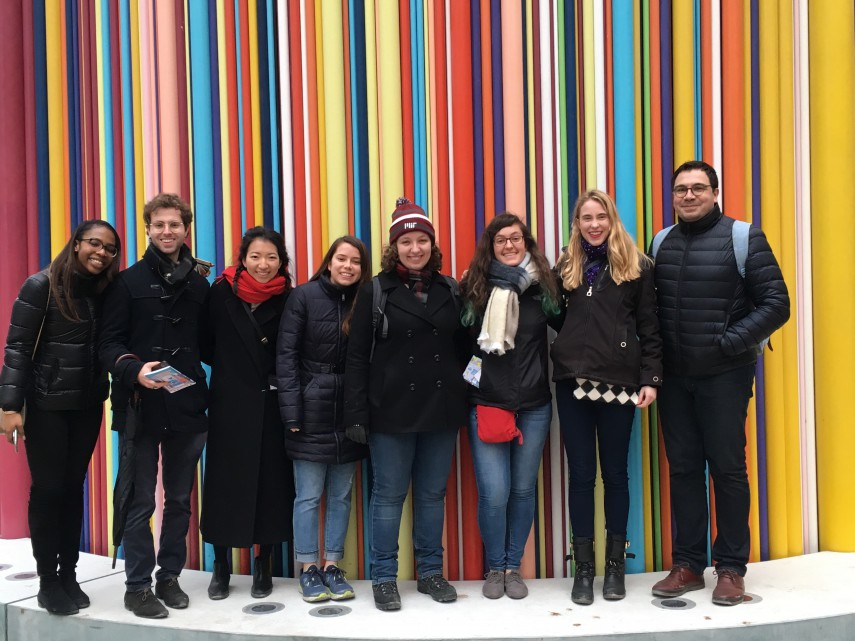 The students of JSF 2018 and our chaperone, Prof. Perreau (on the right). Photo credit to Sophie de Loubens, one of our JSF guides.

JSF is an IAP program sponsored by the French department for students who are committed to learning French at MIT. You spend two weeks in Paris exploring the history and culture of the city and speaking exclusively en français. (Forgive me, Professor Perreau, for writing this post in English!)

JSF is a really unique program. Unlike IAP Madrid, which I did last year, it’s not a class (no homework—yay!!!). Instead of going to class, we had a packed schedule of walking tours of different neighborhoods, musical and theatrical productions, and delicious meals. Literally, we spent two weeks doing nothing but soaking in the atmosphere of Paris.

And the program is funded by MIT—airfare, lodging, metro transportation within Paris, and most meals.

I’m really not exaggerating when I say that JSF was a once-in-a-lifetime experience. We were exposed to a side of Paris that tourists don’t usually see. Our tour guides were native Parisians who were very acquainted with the historical background and day-to-day workings of the city, so we got to learn about things like the design process behind the trash cans and the type of barricades built by revolting Parisians from the 17th straight through to the 20th century. We saw parts of the city, like the business sector and a neighborhood “populaire” housing many African immigrants, that are not frequented by tourists. We saw performances from some of the most celebrated troupes in Paris, or even the world, staged in the most avant-garde architecture in the city. And maybe most importantly, we got to interact with Parisians not as tourists, but as students who were genuinely interested in learning the culture and mastering the language. 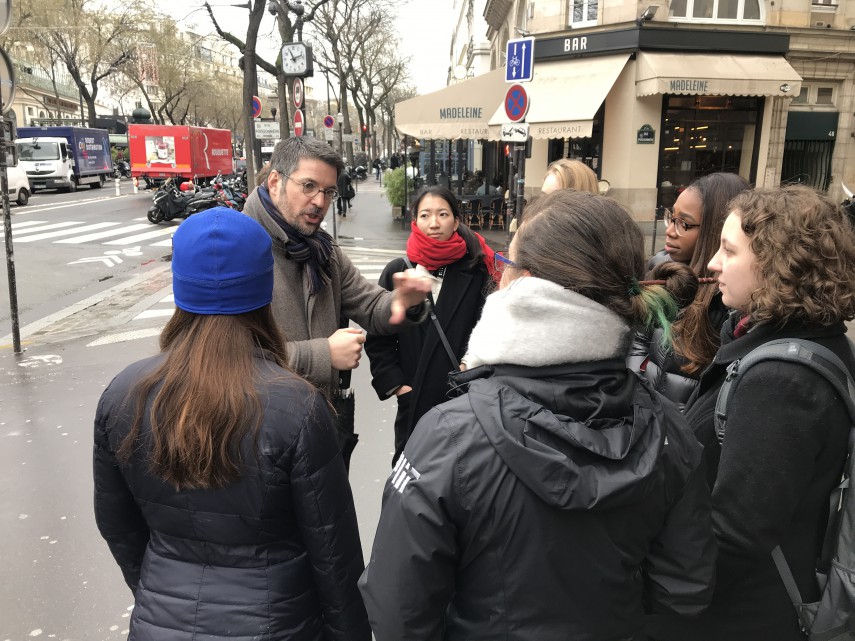 One of our guides, Vincent, talking about the mobilier urbain (“urban furniture” for lack of a better term)–the streetposts, bus stops, benches, and other surroundings that govern your interaction with the city space. Photo credit: Bruno Perreau.

The program was so great because there were so many knowledgeable people who gave their time to make it possible. Our guides Vincent, Emily, and Sophie showed us sides of the city, artistic, historical, and quotidian, that we would never have imagined just walking through the streets. And our chaperone, Professor Bruno Perreau (as well as the other faculty and staff of MIT’s French department) worked really hard to organize and plan the trip and make it an incredibly rich experience.

To give you a sense of what it was like, I’m going to share some standout moments from the trip!

A private tour of the Paris Opera.

The first day of JSF, we had on our schedule a tour of the Opéra Garnier. It’s safe to say that none of us really knew what we were in for. We were met at the entrance by Germain Louvet, a “star dancer” of the Opéra de Paris. “Star dancer”—danseur/danseuse étoile in French— is an official rank that designates the most accomplished and prominent performers in the Opéra. Only the most graceful and disciplined dancers are honored with the rank of a star, a role which means not only international recognition but also a guaranteed role with the Opéra until past the age of 40. We learned from Germain that he was elevated to the role of danseur étoile at the age of 23 as recognition for his standout performance as Prince Siegfried in Le lac des cygnes (Swan Lake). He has been training as a dancer since he was 4 years old. 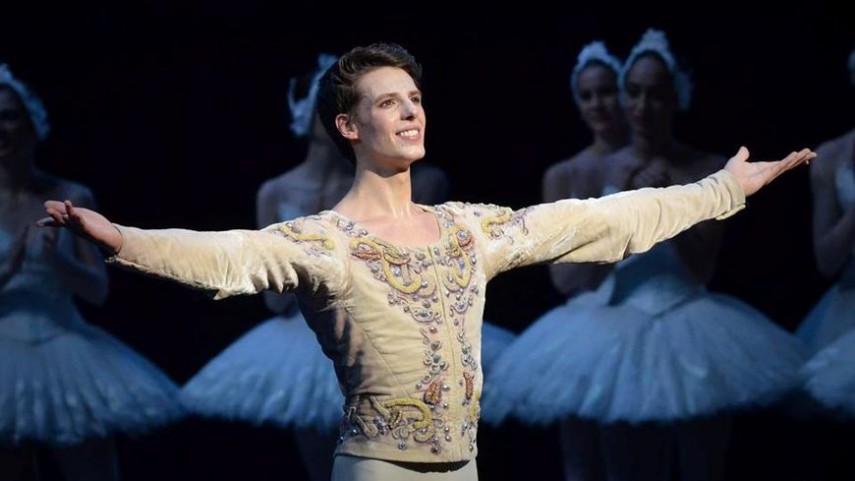 We were lead through the breathtaking foyer of the Opéra Garnier, up a series of rosy marble staircases surrounded by gilded statues and rich paintings, into a collection of exquisite chambers. The public spaces in the Opéra were specifically designed to create a sensation of fantasy. The internal temperature is kept toasty to encourage visitors to shed their practical outer layers and indulge in admiration of the audience’s fashion. From the moment you enter the building, you are transported into the whimsical world of the opera, and separated from the drudgery and utility of the outside. 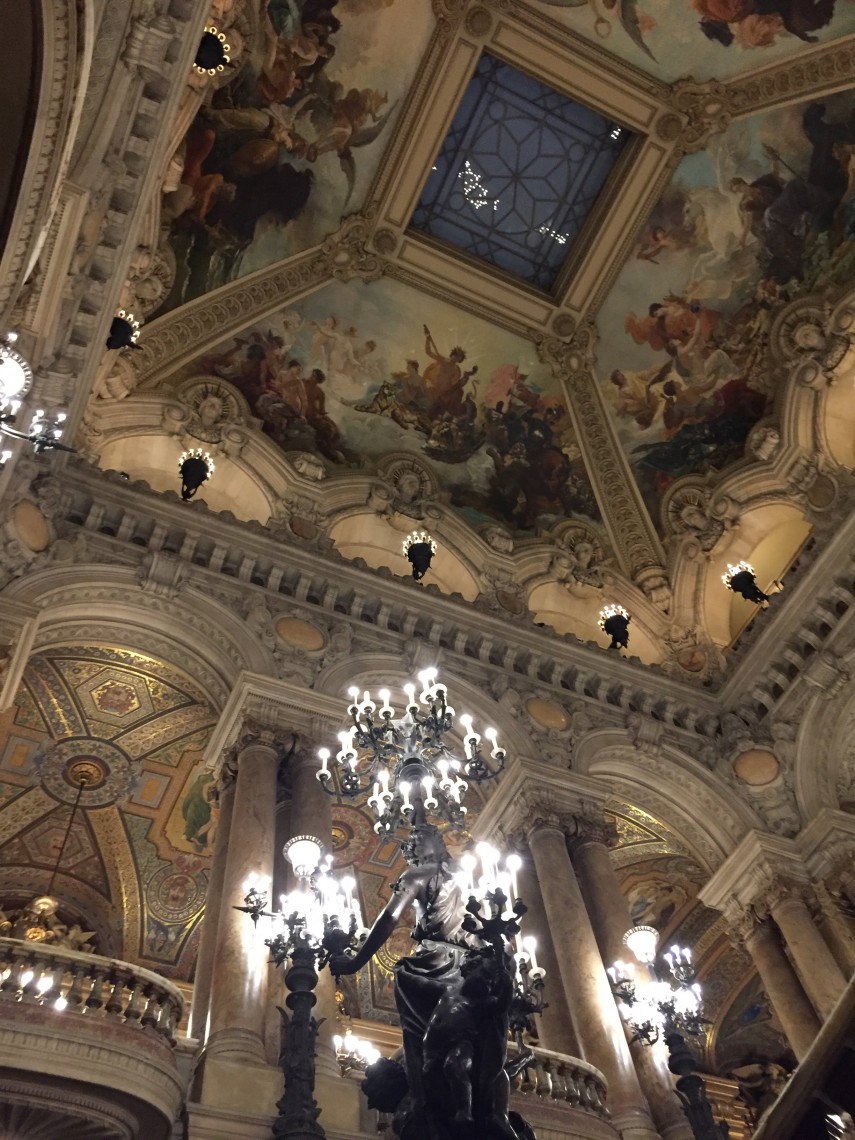 The ceiling above the main staircase into the opera. Photo credit: Kaymie Shiozawa. 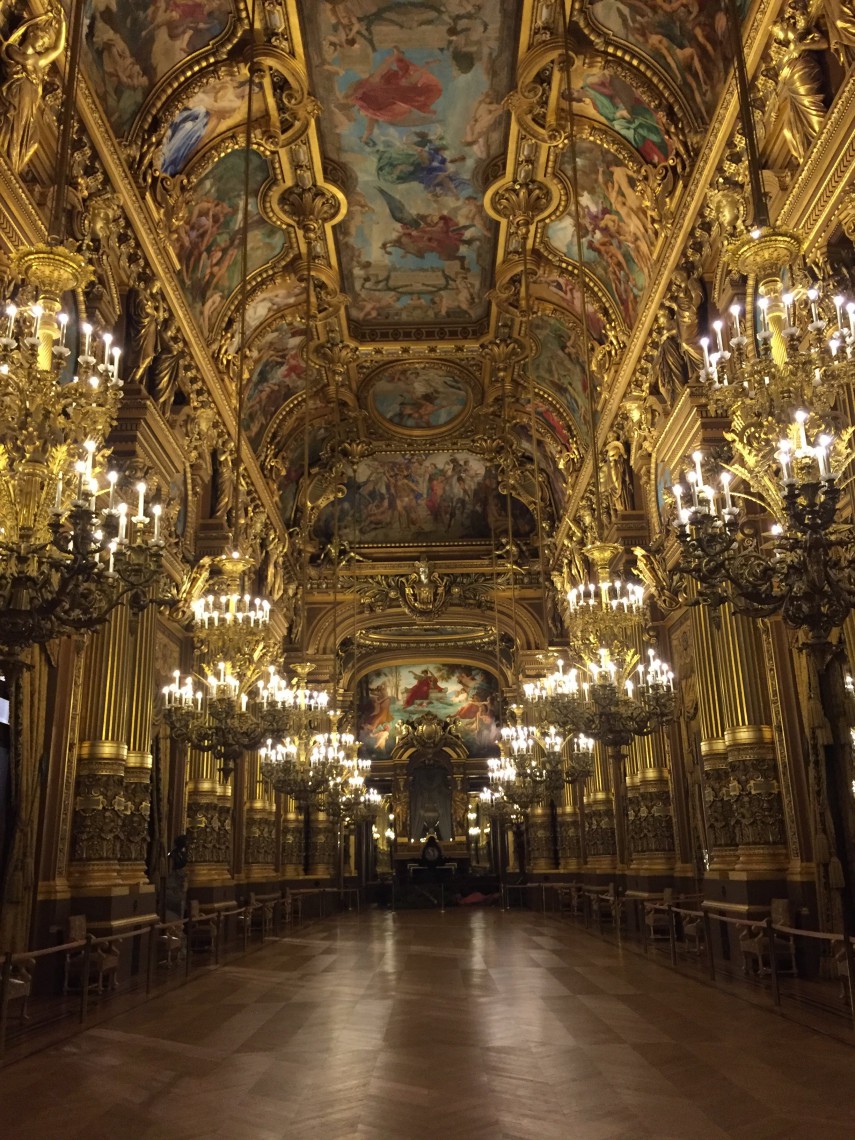 We then entered the main chamber, where the performances take place. 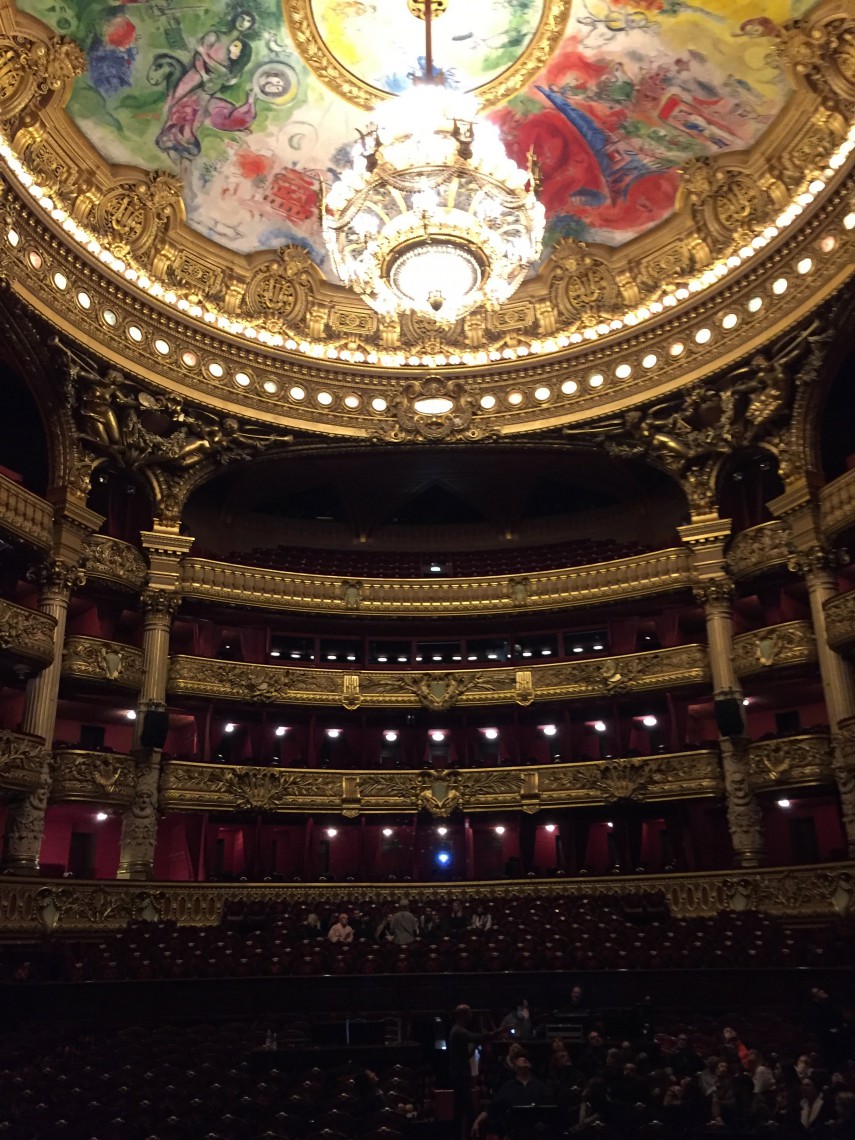 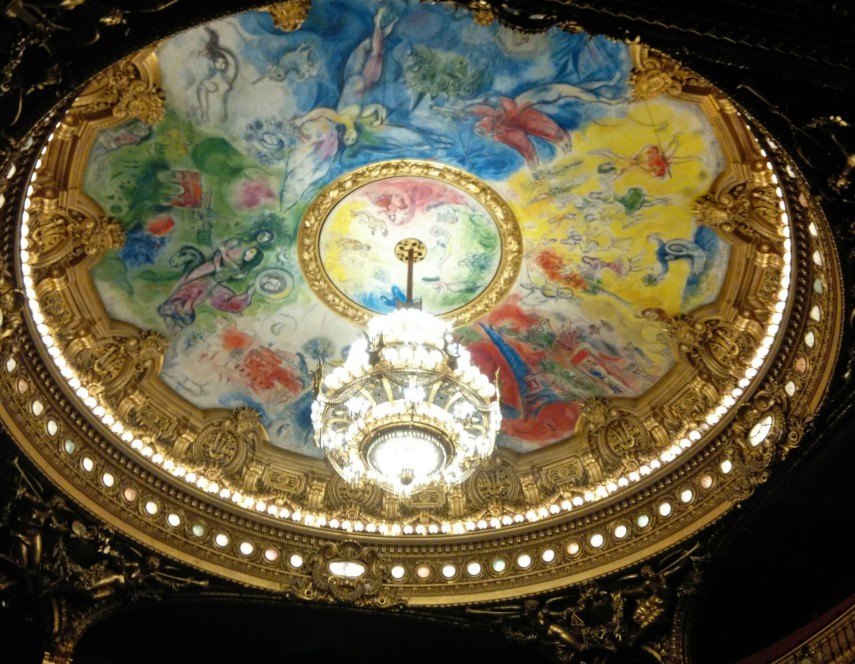 The ceiling dates to the 1960s. It was very controversial when it was installed. This phenomenon of seeing a very modern piece of artwork juxtaposed against the traditional scenery of Paris is fairly common. 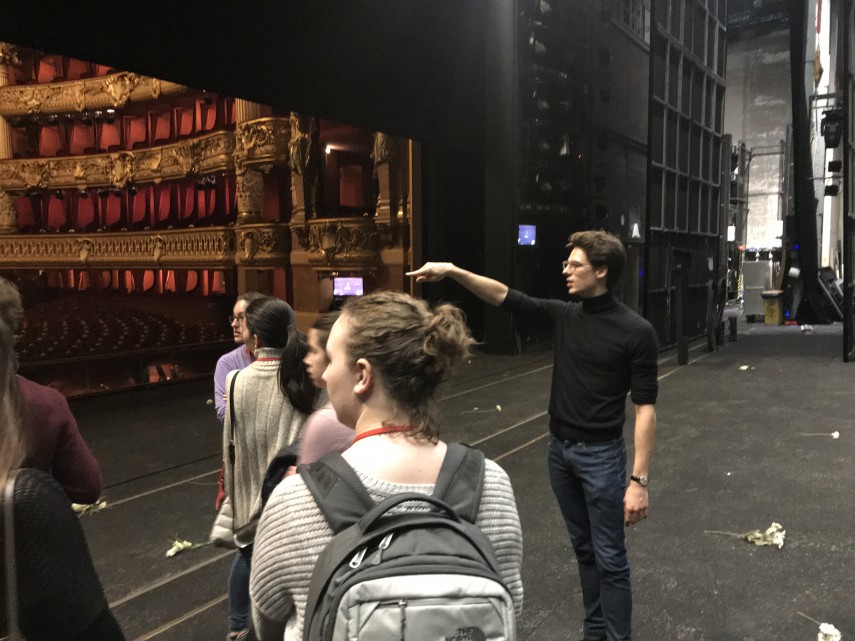 Germain took us onto the stage where the dancers perform! The stage is slanted to give the audience a better perspective, but this creates complications for the dancers, since their movements have to change depending on where they are facing. Photo credit: Bruno Perreau.

Then, we got to go behind the scenes and see parts of the opera that are never open to visitors. 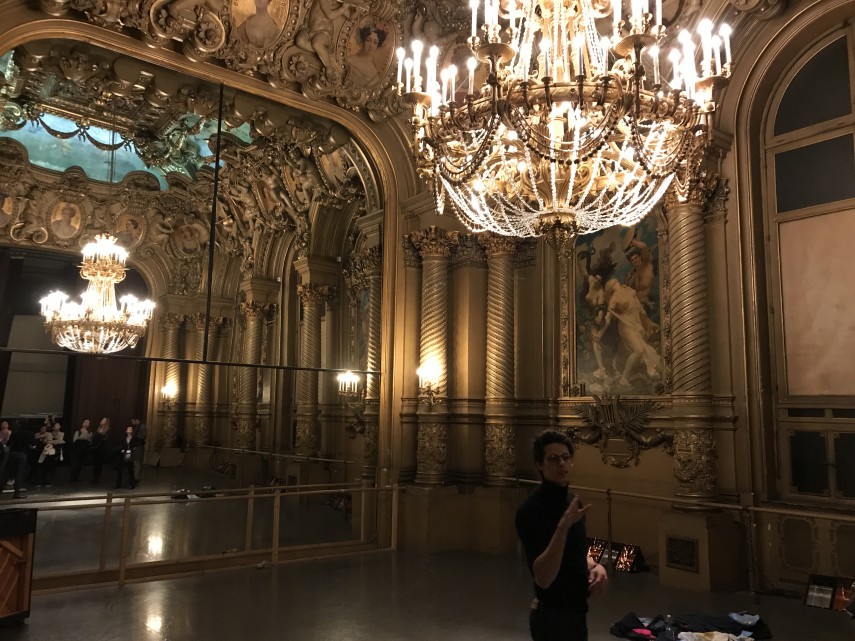 A private practice room. Ringing the ceiling is a balcony where in centuries past, male patrons of the opera could stand and watch the female dancers practice, with a view that afforded an especially good perspective of their legs, with an eye for deciding which of the dancers they would like to sleep with later. There is a disturbing history of prostitution behind the opera. Photo credit: Bruno Perreau. 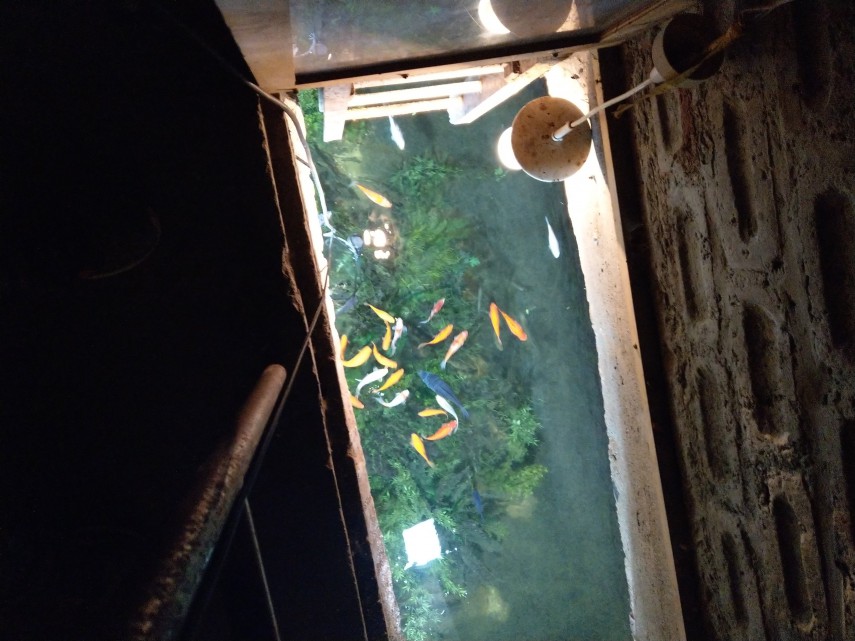 In the basement there is a bomb shelter dating back to WWII. There is also an underground river flowing underneath, complete with blind albino fish! Photo credit: Rebecca Grekin. 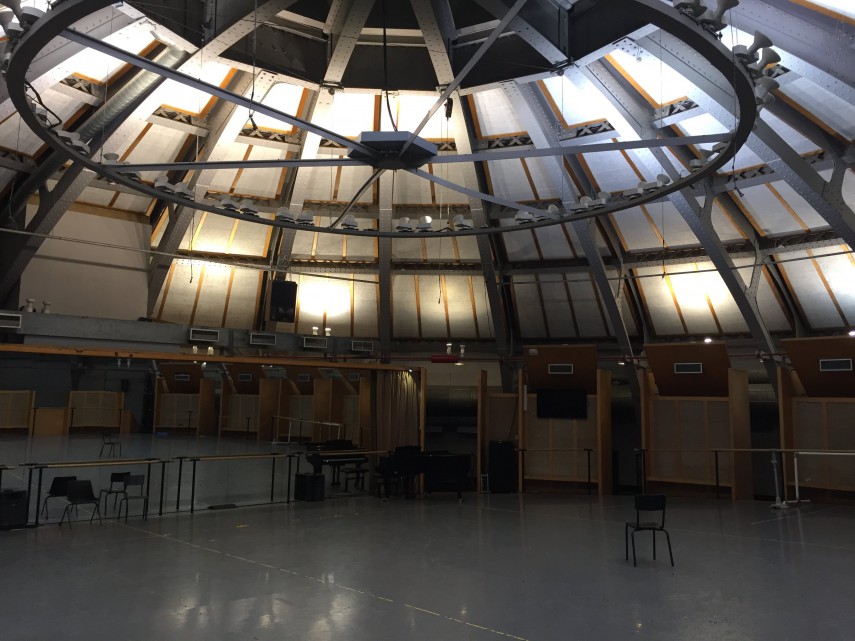 The practice room under the dome that caps the Opéra Garnier. Kind of reminds me of Barker library! Photo credit: Kaymie Shiozawa.

Afterward, we went out for drinks with Germain. I can’t believe I got to chat casually with a Paris opera star. 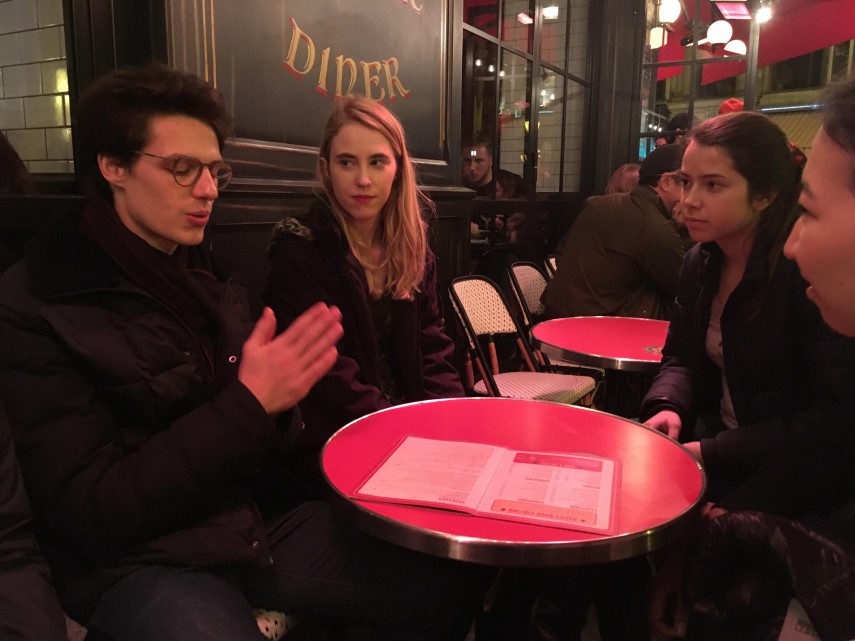 The crowning of a new star

I’ve oversimplified a little bit. There are actually two opera buildings in Paris: the Opéra Garnier, the ornate 19th century building we toured with Germain, and the Opéra Bastille. The Opéra Bastille, so named because it is located in the square where the Bastille prison used to stand, is an enormous building finished in 1989. Though it chooses to downplay the importance of scenery setting the mood for the opera, it at least provides an effective, well-oiled venue for staging and performing breathtaking operas. 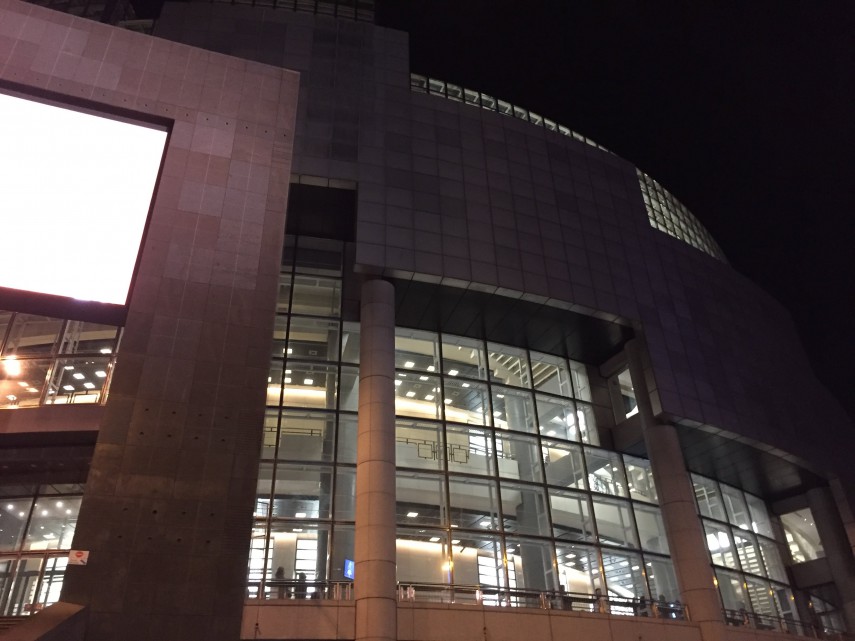 The outside of the Opéra Bastille. Photo credit: Kaymie Shiozawa. 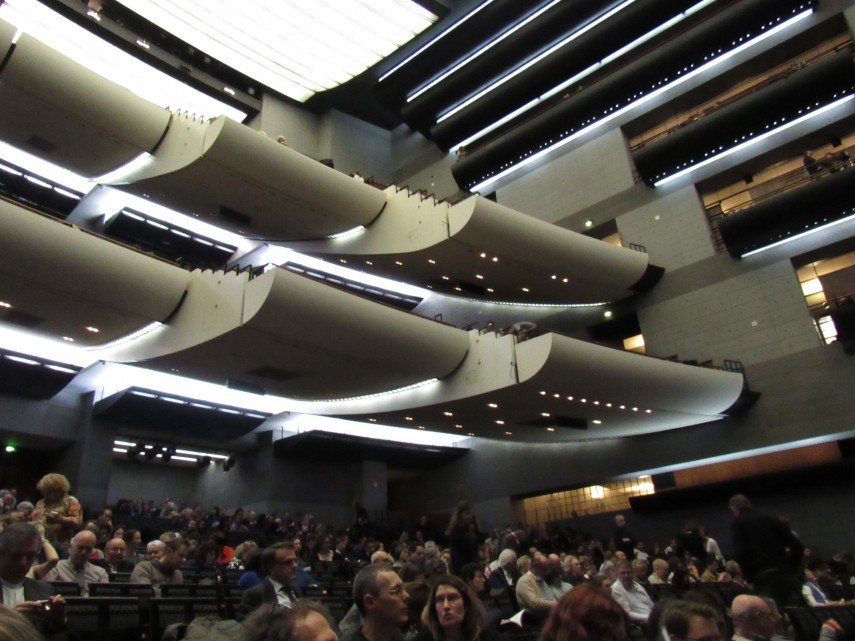 The inside of the main performance room of the opera. The vertiginous stacking of the seats in the Opera Bastille means that the stage can be flat while still providing a good view to the audience. Thus, for the dancers, the Bastille is an easier venue to perform in.

The students of JSF went to go see Don Quichotte at the Opéra Bastille. 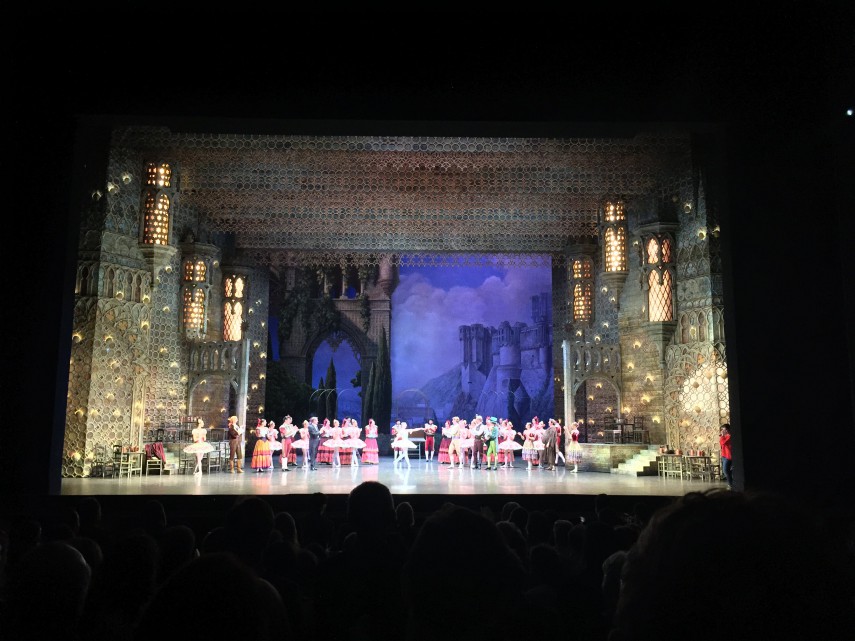 At the end, while the performers were taking their bows and receiving their applause, an unexpected figure appeared on the stage. The Directrice de la Danse of the opera stepped out looking somewhat disheveled. After making a joke about her casual appearance, she announced that the performance of the lead danseuse, Valentine Colasante, in the role of Kitri had been so incredible that night that she was now being nominated as a danseuse étoile.

The moment was magical. The audience erupted. The danceuse received a standing ovation for the next five minutes. She was almost crying. More than one JSF participant was tearing up. It was a moment of incredible joy to watch a beautiful performer be recognized for something she had been working for her entire life.

Star dancers are nominated about once every two to three years, and we just happened to be there to see it. The opéra was really smiling on JSF that night. 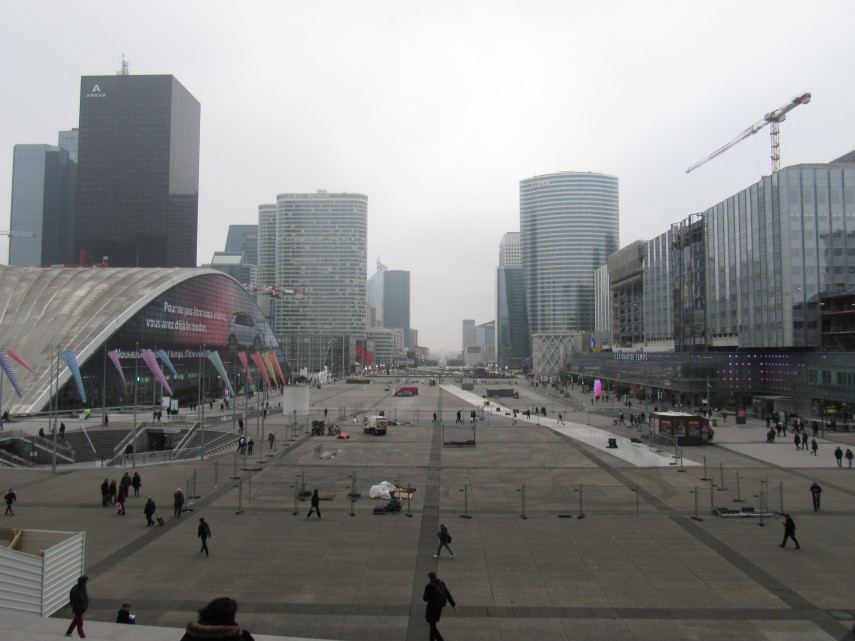 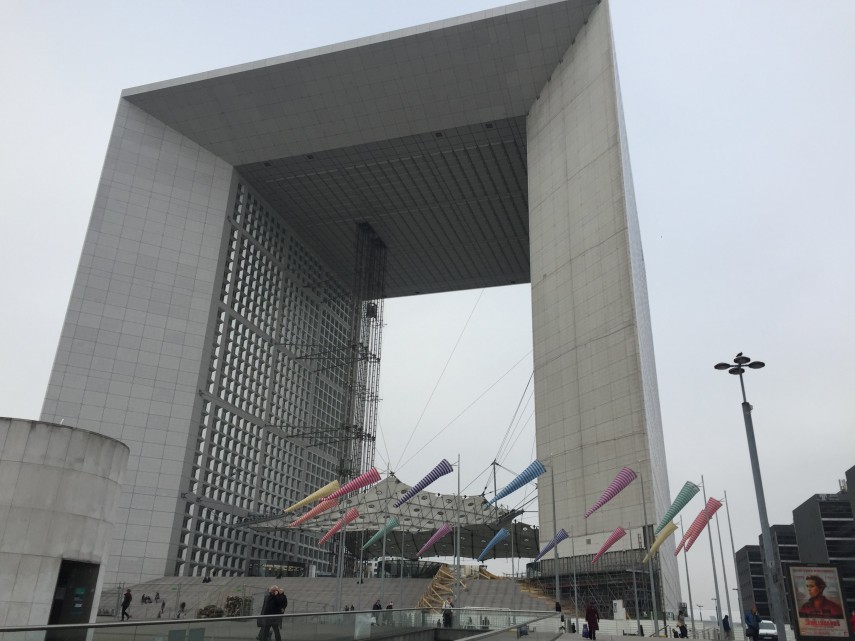 La Défense is the business area of Paris. Built specifically for that purpose in the second half of the 20th century, it is filled with quirky skyscrapers and imaginative displays of modern art and architecture.

We were accompanied on our tour of La Défense by an architect who works in the area. With his supervision, we were allowed into part of the neighborhood that is usually hidden—the underground basement.

There, we discovered Le Monstre—the Monster—an enormous work by the artist Raymond Moretti. 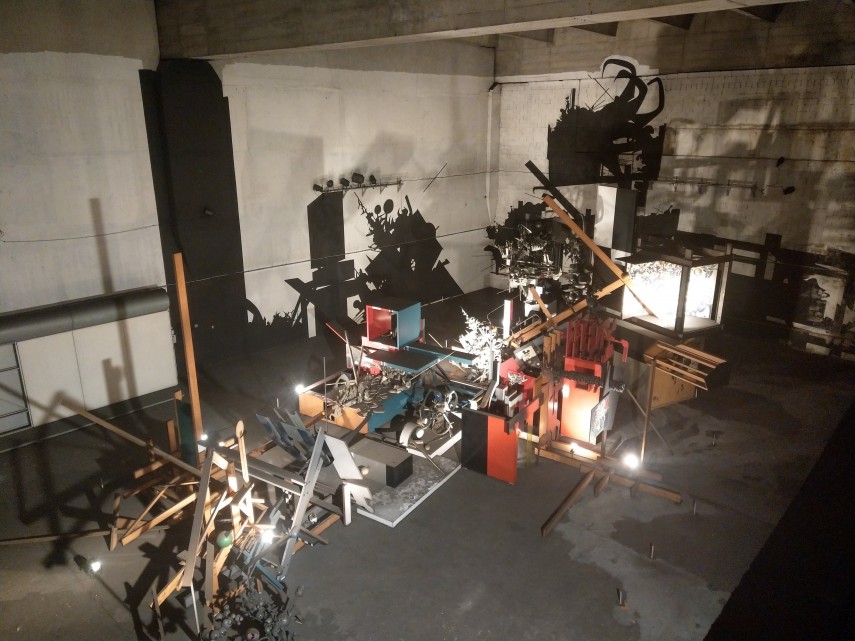 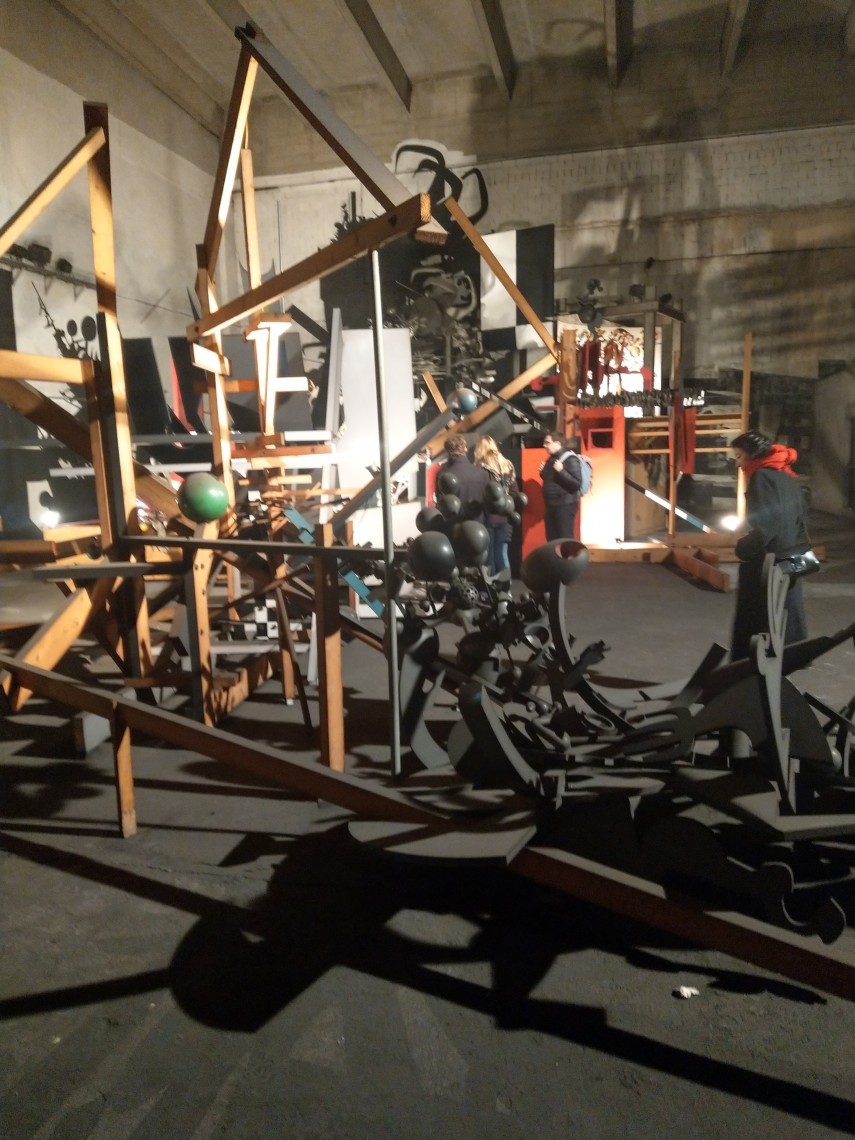 The roar of the underground metro lines that pass nearby give the monster his voice. Photo credit: Rebecca Grekin.

When his old studio was destroyed, the artist set up shop in the underground basement of la Défense. When he died, it was sealed up, leaving a hidden monster lurking under the bustling metropolitan square.

There were also some days that were less adventurous. One morning, we tried to get into the library of the Sorbonne, but were shut out because it was full of students studying for final exams. Instead, we headed over to a café and enjoyed lunch with some of our guides.

With l’addition came some little candies. On the inside of the wrappers were written some jokes (blagues). 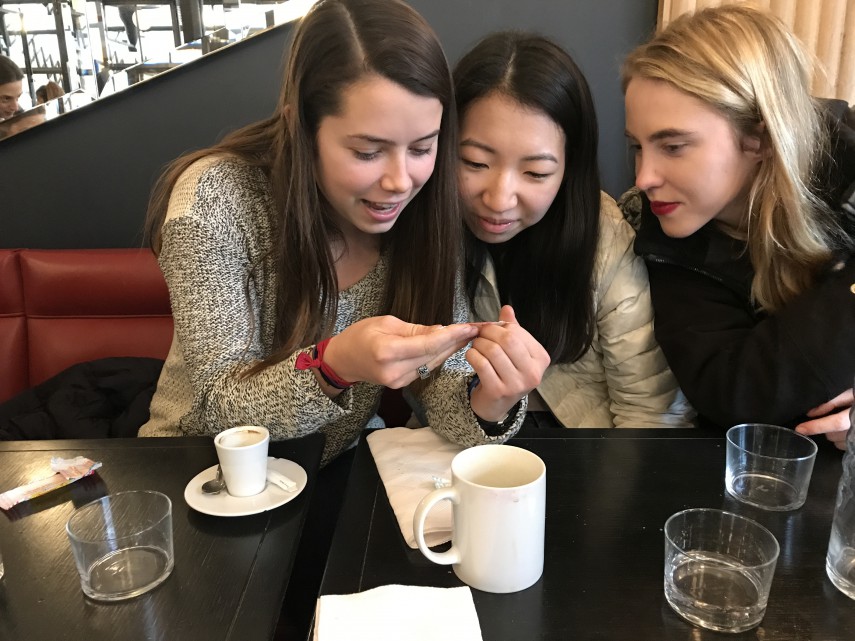 We quickly went to work deciphering the jokes. Anyone who has learned a foreign language knows that humor is one of the hardest things to understand, because it usually relies on subtle puns or cultural context. We learned a lot of new vocabulary that day!

How does a zero get hit on by an eight?
He puts on a belt!

Sitting in the café, chatting with each other and our guides, practicing French, and laughing at les blagues is one of my fondest memories of Paris.

If you want to see more pictures…

I might have lied a little when I said that there was no homework for JSF. In order to commemorate the trip, for the use of future participants and planners as well as for our own scrapbooks, we made our own JSF 2018 blog detailing our adventures. Check it out! There we have a day-by-day breakdown of all our activities. It’s in French, but there are a lot of pictures. :D Also, each of the participants is writing their own entry about a part of the city or the experience that they found interesting and wanted to dive deeper into. I wrote mine about the relationship between modern and traditional architecture in Paris.

For the next two weeks, I’m taking advantage of being in Europe to do some traveling with my mom. Until next time, à bientôt! 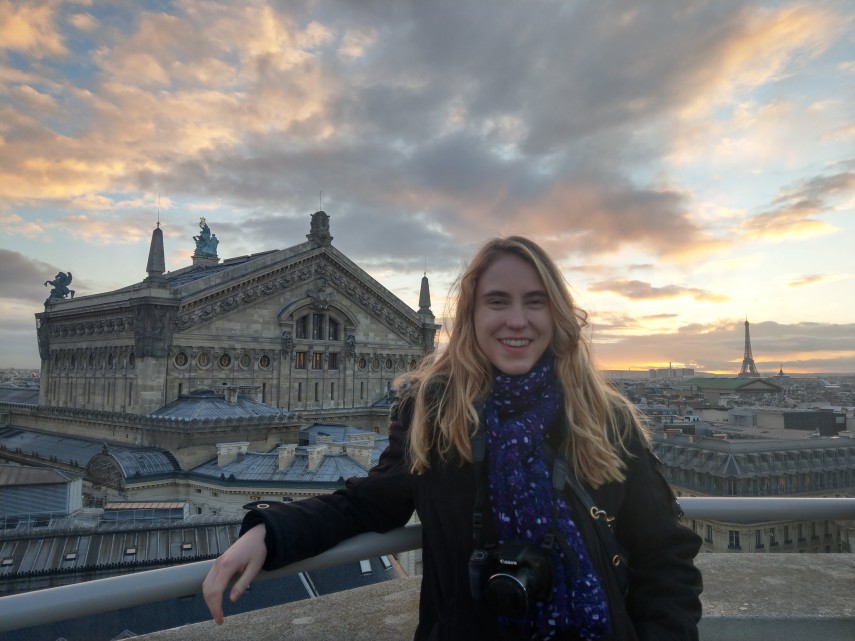 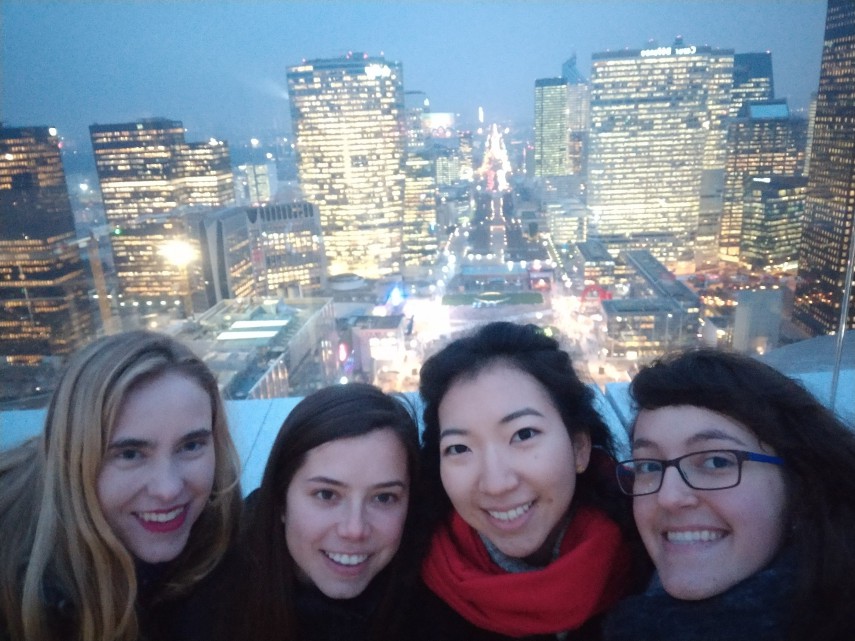 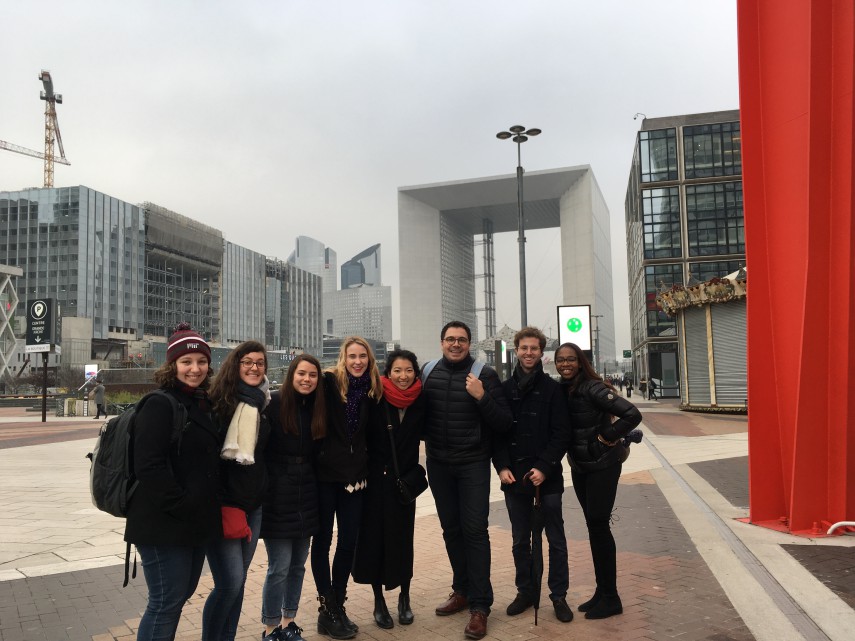