(Originally titled "Junior Year: The First Day" but I procrastinated too much)

In comparing the beginnings of each of my academic years, I’ve noticed that my outlook on things has changed dramatically. It can be summarized thusly:

Freshman year: Woohooooo MIT is gonna be so cool! Just four years of this and I’m gonna run the w-OH MY GOD WHAT IS HAPPENING THINGS ARE HARD
Sophomore year: What? Classes start tomorrow and there’s already a reading assigned for 5.13? This is nonsense. This year is going to be nonsense.
Junior year: Ha! A few days before classes started, I made sure there wasn’t a single thing on Stellar* that I didn’t know about. I even read the first chapter of each textbook. Bring it, junior year. BRING IT.

Where did all of that energy come from? I’d say it came from the many things I have to look forward to.

For starters, I’ve slogged through the majority of my GIRs and my premed requirements – and while all of them were intriguing in their own way, only a few were classes that fall into my major (Brain and Cognitive Sciences) or proposed concentration (Philosophy, which could easily become a minor with some work).

Don’t get me wrong: I’m fascinated by aspects of all of the sciences with which I’ve been acquainted, but now, I’m starting to take the classes that I had my heart set on. There isn’t quite an experience that could ever replace that. It’s mind-expanding, and something completely new and appealing. It’s like…watching Breaking Bad for the first time (which, incidentally, I started doing a couple weeks ago thanks to Netflix and Amazon Video. I’m now completely caught up and am awaiting the sixth and final season.)

It also helps that I’ve got an enviable class schedule. Just take a look! 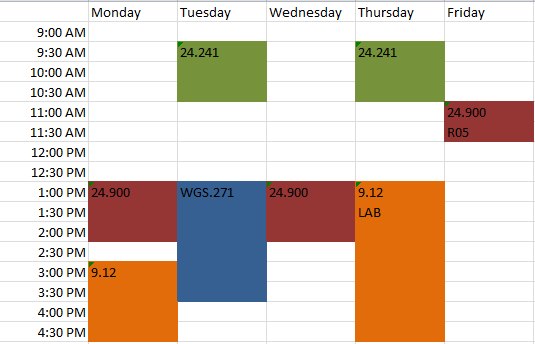 Since fall classes always begin on the Wednesday after Labor Day, I’ve only had something from 3 out of 4 of my classes. Even so, I already have something to look forward to for all four of them. Let me run down the classes and what’s happened so far.

A very long time ago, I told you guys about my linguistics research with QRLG. That particular stint lasted close to a year, and actually got to some pretty exciting highs – including writing an abstract and drafting a longer paper, two mock presentations, and so on – before some things that came up in my life made it too difficult to keep hammering out research. (Incidentally, the blogging also got pretty sparse around that time.)

Though that story didn’t have a picture perfect ending, I’m still quite familiar with several concepts in phonology and phonotactics, research methods in linguistics, and some other stuff. Consequently, I have an edge in this class that I wouldn’t otherwise enjoy.

Even so, 24.900 will allow me to get some provisional answers as to why, even as someone who scarcely knows a word of Afrikaans, one of the languages that my parents speak fluently, I am able to get the gist of their conversation. Context clues and some close cognates probably, but I get the sneaking suspicion that some other things are helping, too. For one, I think the syntax (the proper formation of sentences) of Afrikaans is comparable to that of English.

One major arc of assignments in 24.900 concerns the study of a language that you don’t speak – which will be documented in p-sets and even a report or two – so I’ll be able to use a few experiments to confirm or deny my hypotheses about Afrikaans. And then – for once! – I’ll be able to say to them that I actually know something about the language that they speak.

In my logic professor’s own words, after taking Logic I, “You’ll come to see why people reason so badly.” However, this class isn’t meant to be an overview of logical fallacies. For 24.241, it’s a much more academic that started out by learning the language of sentential logic, how certain functions used in sentential logic are symbolized (as connectives, or words like “and,” “or,” “not,” and “if…then”), and the form and features of arguments.

Logic is one of those interesting disciplines that attracts students from a variety of majors. For the first time ever, I found a couple of pure philosophy majors in a class; joining them were math majors, computer science majors, and a few others who didn’t fit in any of the above categories. I have no doubts that everyone there has something they want to take out of it, since principles of logic crop up pretty much everywhere.

In my person-who’s-concentrating-in-philosophy point of view, one of the implied, overarching goals of the course is to acquire the tools needed to analyze one’s beliefs, and thus to be able to achieve a harmony that exists when one’s beliefs are consistent with each other. We’ll see how that holds up as I go through the course.

Classes like 9.12 are some of the most powerful reminders of why I’m here. I’m one of the only people in my lab section that has no hands-on experience with molecular biology methods in the lab; even so, that won’t be a disadvantage. In fact, on the first day, the 9.12 professor explicitly said that it’s all about what you learn, the effort that you put in, and the willingness to grow as a scientist that you exhibit. To someone uninitiated in neurobio lab methods like me, that’s a relief. How often is it that you can say that you were in a place where it was okay to take risks, even with things that appear esoteric at first glance?

To make things even better, we started out with a low-key lab on the first day. In a virtual walkthrough of what our wet lab assignment will be next week, we conducted some cDNA and genomic blasting of some digital sequences, as well as some sequence identification and translation of mRNAs. Should I end up pursuing any additional molecular neurobio research, I’ll be benefiting from the work of a ton of other scientists that helped assemble the databases we used that day. Hell, it’s a pretty good time to do neuroscience research in general – I read recently that the state of Massachusetts is pouring a lot of money and a handful of partnerships into it.

Will that shake my aspirations to be a practitioner instead of a researcher? I can’t say yet, but the ethos of this class means that 9.12 could be the most convincing argument in favor of a life of research. If nothing else, it’ll certainly be the most eye-opening one.

This is probably the class I’m looking forward to the most, and also the only one for which I haven’t yet attended any lecture, as none have come up yet.

It’s also another course that I’ll have somewhat of an edge in, as I took 24.231 (Ethics) last fall. However, this class seems like less of an academic exercise and an analysis of the fundamental concepts, and more of a broad investigation of the not-so-philosophical concepts that come into play in tough medical decisions. As a doctor-to-be, it’s a class that I think I can’t go without.

A detail that too easily gets lost in the rigor of premedical academics is that, at the end of the day, you’re treating human patients that come from a variety of backgrounds. Showing sensitivity and deferring to their beliefs and perspectives is only to their benefit – and, as you pursue the best interests of your patients, to your own benefit, as well. I’ll admit, though, that upholding this ideal might not be as easy as it sounds. Hopefully, this class should give me a better sense of what forces come into play in both affirming a patient’s beliefs and the principles of effective care.

^ There’s also a bunch of non-class stuff, but as I write down all of that other stuff – and how it connects to the work I’ve done this summer – it’s sadly getting long enough to constitute its own blog post, and I have some work to finish before Monday. I’ll have more ready at the end of next week, though!