‘Just Chillax’ [about your college essays] by Elizabeth C. '13

My little brother is wicked smaht.

To those of you who sent in your early apps – congrats! You’re done! With one!
(The secret to life is to celebrate the little accomplishments. Like making it to class without running into anything/anyone while on my bike.)

To those of you who are still working on apps, I thought I’d offer a bit of unsolicited advice (but puh-leeze, you know you want it) about the… DUN DUN DUN… COLLEGE ESSAY.

Before I start, I’d like to offer a statistic for those of you obsessing over the “chance me” threads on College Confidential (if you don’t know what I’m talking about, don’t worry – you’re not missing out):

0% of people who do not apply to MIT get into MIT.

That’s the main statistic you need to be concerned with. Yeah, yeah, there’s an application fee, so don’t apply if you don’t want to come here. But otherwise, what have you got to lose?

Now that we’ve got THAT issue out of the way, let’s address the college essay. If you want help on the mechanics of it, I’m not going to reinvent the wheel – instead, check out Chris S.’s awesome entry.

The essays are a chance for you to show off your unique personality, because let’s face it – you like science? You do well in school? SO DOES EVERYONE ELSE WHO APPLIES TO THIS SCHOOL. (Disclaimer: If you don’t actually like science all that much and are more into things like management or econ or literature or music, don’t be discouraged about what I just wrote. I’m just trying to get a point across.) The essay is your chance to show that you’re not a mindless robot, just as I am not a mindless robot and just as Chris, Matt and the other admissions officers are not mindless robots.

More than I love being around motivated, inspiring, wicked-smart kids, I love being around REAL people who, at the end of the day, are still just your [somewhat] normal teenager/twentysomething. When the admissions officers ask you to write about what you love, what your dreams are, what makes you YOU, it’s actually not a trick question. So when people told me I should write about what I love, I – for better or worse – took it rather literally, and wrote about my kick-butt little brother.

(Not saying that this is the best essay ever or that you need to make yours look like mine. This is just an example. I’m me. You’re not me. If you submitted an essay exactly like this one, that’d be creepy.)

“Hunched over and stern, I move painstakingly to create the ideal shape. All of my academic stress has culminated in this ridiculous focus, my obsession to finish a perfect drawing. As I close the almost-faultless white loop, a comet of red streaks across it –

“Ryan!” I gripe to my six-year-old brother, whose chalk rainbow now decorates my colossal drawing, “You just ruined Nemo’s eyes!” In his usual banter, he fires back “Just chillax, I’ll help you fix it.” He continues his multicolored arc, totally unruffled. With AP tests and a college final looming, it seems ill-fitting that I’m spending time with my little brother, covering our driveway with chalked-out Pixar characters, but this much-needed break is keeping my brain from bursting into its own little chalk dust particles.

“Uuuuuuuuggghhhh!” I grunt out in frustration – I think of the chapters I haven’t read, the math problems I haven’t finished.

“Is your head going to EXPLODE?!”

Everything I need to know, I haven’t learned from my brother. Doing laundry, computing a triple integral, playing the third movement of the Lalo cello concerto – I learned these things from people at least 20 years older than I am. Ryan is no philosophical sage, so naturally, I have the older-sibling tendency to dismiss his advice strictly on the basis that he’s only six. But those 11 years that differentiate us – years that I’ve had to fall into a rut of thinking the same way – make some of his comments so probing. He is immature, but he’s in no hurry to grow up. Of course, he has no idea that his ways of thinking helped me come to appreciate the small things and not be overwhelmed by the seemingly-impossible. Such wisdom – wisdom that has stayed and will stay with me – can come from the most surprising places, including the kid who is now picking his nose.

My mom’s voice and a flickering streetlight tell us it’s time to go inside. For a moment, my mind dwells on all the homework I could have finished in that hour, but I quickly realize how much more relaxed and confident I feel. Ryan grabs the chalk container and shoots me a peace sign, telling me again to “chillax” and do things “one at a time.” I begin to think that the break was a good idea.

Plus, the driveway looks awesome.”

Yep, you caught me. This was totally an excuse for me to revel in the fact that I miss my little brother a ton right now. Hopefully you got something out of it. Can’t wait to see you in a couple weeks, goober! 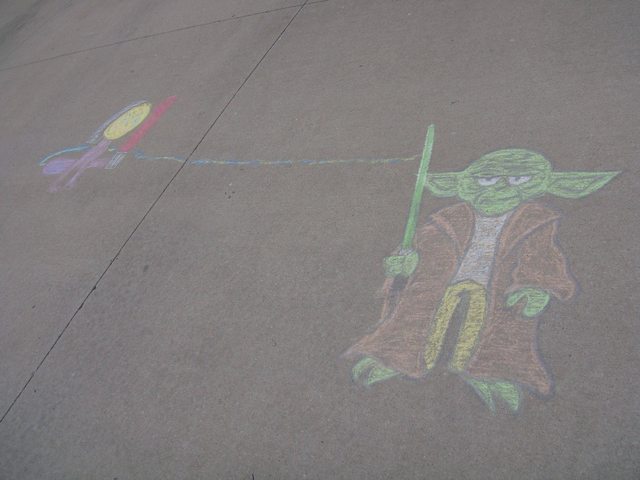 (From Thanksgiving break of last year. I may not like Harry Potter, Star Trek, or Lord of the Rings, but I’ve still got some nerd in me. The Emperor Palpatine is courtesy of Ryan. The Yoda is courtesy of you-know-who.)

14 responses to “‘Just Chillax’ [about your college essays]”