8:02 pm
I’m here in 26-100 getting ready to watch the 2008 Latke Vs. Hamentashen debate. In essence, take a bunch of MIT professors and hundreds of interested parties listening intently, cheering on their favorite Jewish tasty. 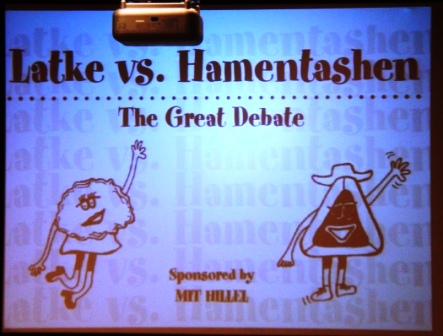 I’m going to try to semi-flow this debate, keeping you updated on all of the important bits and some of the funnier jokes. Pictures could be scarce because of how hard it is to take, compress, crop, upload, and insert pictures while typing. I did manage to catch some candids of the human Latke and human Hamentashen. 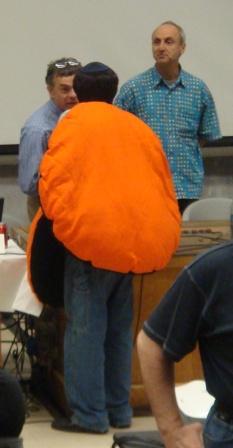 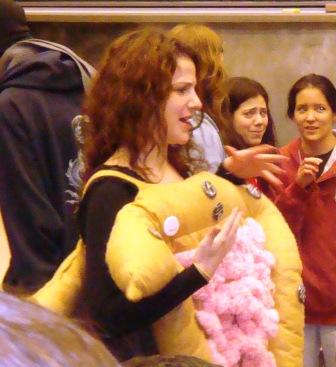 Can you guess which is which???

8:11 pm
Master of ceremonies Jeremy Wolfe is explaining the origins of the Latke vs. Hamentashen debate.

8:13 pm
They are going to flip the ritual package of Top Ramen in order to decide who begins the debate. With a call of heads, Team Hamentashen has decided to speak second. Peter Dourmashkin, Stephen Van Evera, and Patrick Winston are now being introduced and will soon be arguing for the Latke.

8:16 pm
This is turning into a roast! I’m not sure they could have made any more physics/TEAL related jokes when introducing Dourmashkin, who is now speaking.

Latkes are brain food (read they look like brains)

After testing if a potato floats in a large beaker of water (it didn’t), Dourmashkin pulled a latke from his pocket and, lo and behold, it floated! You thought Archimedes said Eureka? Psh, he said “Your Latke!” Latkes are obviously superior!

Dourmashkin is done speaking and now Ari Epstein is being introduced for Team Hamentashen.

We’re all receiving paper plates in the audience. Only the Hamentashen side is getting little stickers to go along with them. That’s because we’re awesome!!!

Constructivism: The learner learns more through experience and construction than via the normal method of “LOL I’M AT MIT AND GLAGLASDKGHSJDHGLKJSFDH” <- That’s the sound you make when a firehose sprays you in the face.

Hamentashen affords options, lots of different fillings, while the latke allows potato and . . . sweet potato. It’s fun to make Hamentashen with friends, it’s a great party food! Latke? No. Hamentashen is dessert! Latke? No idea, is it even food?

8:30 pm
I JUST MADE A HAMENTASHEN OUT OF A PAPER PLATE AND STICKERS!

8:31 pm
Patrick Winston was just introduced and is ready to argue for the latkes again.

They’re playing a video of a tour in the underground of Stata. Twisting and turning through machine rooms we get lost and confused but then BOOM! A door opens and a nice little kitchen is all set up and latkes are frying. The actual home of Katz’s Delicatessen!!! 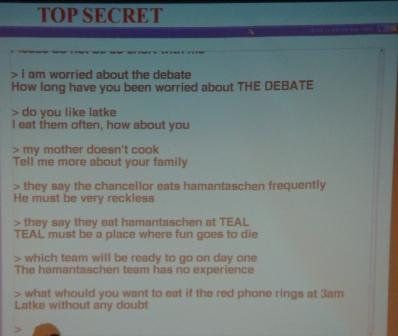 “Adult Hamentash is the only multicellular lifeform with triangular symmetry”. . . go figure? A biological approach to hamentashen should be a bit interesting.

How does a single cell become an adult hamentashen with 10^12 cells?

Um, apparently now we’re looking for mutant hamentashen. The first is a hamentashen with too much filling. Another is one with too many tails. The last is one that has arrested development, it never folded. It has been scorned and named “latke.” Therefore, Latke = mutant Hamentashen. QED

8:46 pm
Stephen Van Evera is now being introduced. “Latkes Rule, Hamentashen drool.” is the title of the next slide.

He’s discussing . . . WTF!? He just spent an entire minute discussing the word “Sniviling” and “Snivility” and how it’s a great thing to accuse your opponent of. It’s vile, associated with evil, badness, Brittney Spears, and generally distasteful things. I take offense!

The stars on the flag? Nope, latkes. 50 latkes, all on our flag!

Wow, I hope that these slides hit the internet, I need to show you some of this stuff!

“Latkes=hot oil, therefore, latkes improve national security if you can pour the hot oil over the castle wall onto Bin Laden’s head. Hamentashen? No good for killing people. Fooey on them. Surrender monkeys! ”

8:57 pm
Vote For Latkes! Pull the Lever for Latkes!

(I think they may have just won right there. Boo-yah)

Twice as many syllables, twice as good. w00t. The latke’s goal in life is to fold into a hamentashen. Hamentashen can never be folded into a circle, why? BECAUSE CIRCLE’S DO NOT EXIST! Therefore there is no perfect latke. QED.

9:04 pm
Circles can’t tile, they waste space while sitting in the pan and cooking. Latkes, while wasting heat during cooking, contribute to global warming!

“MIT is a place of truth, knowledge, and honesty! Hamentashen enhances math!”

“If you take two hamentashen you can make the Jewish star.”

“Hot oil good for weapons? Ok. WHY ARE YOU MAKING FOOD WITH IT?”

Leonardo, a smart robot creature from the media lab, just verified that latkes are wonderful and hamentashen are evil. Leave it to the robot!

9:20 pm
The latke team argues: The MIT Hamentashen Team will cause Bin Laden to take over the world! QED

9:22 pm
We’re voting now, who will win!? Latkes? Hamentashen? CAN YOU HANDLE THE SUSPENSE???