A epic story of Chinese food, heartbreak, and loss. All because I have no TechCash.

I didn’t start out this weekend trying to write a scathing expose on what it’s like to survive at MIT with no TechCash, no cash, and a terrible desire to spend money on food at least once a day. This certainly wasn’t planned, especially because I still have six hours of exams to power through – it actually probably started about two weeks ago, when I bought lunch at Stata, handed over my ID and was alarmed to see that little “low warning” sign.

I have $1.70 in my TechCash account, and the reason it’s stayed that way for such a while now is a combination of a lot of things. A lot of it has to do with the fact that I filled up my account to a pretty sizeable amount at the beginning of the semester, since I’m far too lazy to go to the basement of the student center and put money in my account for free (quick deposit online costs $1.50), but it’s also finals week, during which many MIT students seem to take on the view that life’s ordinarily small daily burdens are now no longer obligatory. (This could explain why the girl studying in the cubicle next to me looks like she’s making a beanie out of uncombed hair.) For me this includes a couple things: not picking my clothes up off the floor (no roommate, no mom –> no place to stand), not washing my dishes (although someone in my suite cleaned up last night; pretty suite), and not watching my bank account (not that I’m out buying couture, just caffeine drinks and Thai food).

To give a little background- MIT’s money system, rather than work with “points” or “meal plans” like other schools with more dining halls do, is basically a debit card that doesn’t collect interest. You put money on your TechCash account whenever you want, either from your account online or in the basement of the student center, and use it to buy food at dining halls, restaurants in the student center – basically anywhere on campus, and a few places off-campus. You can also sometimes use it to buy things like tickets to events or food from class fundraisers, or do your laundry, and it doesn’t run out at the end of the semester, either – it just stays as money in your account. While not entirely necessary to survive – all places that take TechCash also take real cash – it can be pretty impractical to carry around large wads of cash, and not everywhere accepts actual debit/credit cards.

And so we use TechCash. But I haven’t been, and it’s been rough.

Day 1: the beginning.
Salad and a gatorade at Stata. “Low Balance,” the cash register informs me. I glance at the angry green $1.70 briefly, wondering whether I should sprint home to my computer and refill my account.

Obviously, I do not do this.

Day 4:
Ben ’11 wanders into my kitchen complaining of hunger, and I look up from studying something definitely genetics-related (okay, I’m lying a little, I might have been on facebook but it was probably looking up something very important). “We could go to the student center?” his roommate Allin offers hopefully. NO, Allin, we CAN’T go to the student center. I consider cooking, before remembering there is studying to be done and cooking can take a lot of time.

We order Chinese food from Royal East, a place not too far from campus, and I pay with debit, because there is a whole wide, WIDE world out there of places that do not require only cash or TechCash and those places are wonderful repositories of food and goodness, that are also kind of expensive because you have to pay delivery charges and tip. But also, not in TechCash.

Day 6: or why I’ve been banned from Anna’s Taqueria 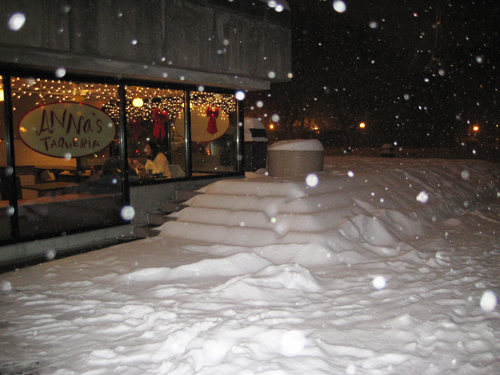 Today I hit rock bottom. I’m on shift on the ambulance, from 2300 to 1200 (11 PM to 12 PM), and around 8 AM it’s blizzard-ing outside. We decide to go to the student center for breakfast because every other breakfast place in our service area is closed, and the roads are too blocked up to drive very far. The two other people on the crew go to LaVerde’s, the small grocery store on campus, and I go for Anna’s. On four hours of sleep, I request a breakfast burrito and watch the guy make it in front of me. I don’t register my money situation until I get to the cash register and my custom-made vegetarian burrito is looking extra-delicious underneath a “Cash or TechCash only” sign.

Feebly I hand the lady my debit card, and she looks as me as if I have very seriously insulted her family.

So I weigh my options. There’s an ATM, but I only have my California-specific debit card on me. I could go ask one of the people on shift with me for money, but I can’t pay them back later because I won’t have any cash later, either. I could also risk having to be taken away by the very ambulance I am working by telling her I can’t pay for my food.

(It would be a good way to end this story by saying “and THAT’s why I’ve been banned from Anna’s Taqueria!”, but I haven’t actually been banned – well, as far as I know; I’ve just decided not to go there until maybe like the end of IAP. I’ll get back to you on that.)

Day 9.
The fifth floor of the student center has this wonderful place called the reading room where all sound goes to die, and this is where I’ve parked myself for the day before my first final. I’ve been here for about three hours before I decide it’s time for a break, and head downstairs to order a falafel.

From the line I can see no “TechCash or Cash” only signs, and so I feel this is a fortuitous day – but when I get to the front of the line and hand the guy my card, he smiles and shakes his head at me. “We don’t take credit.”

This, now THIS I was not prepared for. Anna’s, maybe. But THERE’S NO SIGN AT THE FALAFEL PLACE. Seriously??

I’m preparing a lack-of-sleep-induced diatribe about false advertising when the dude smiles helpfully at me. “We can wait for you!” he suggest cheerily. Only then do I notice he looks vaguely like a Mediterranean Santa Claus, and I start to remember for most of the world it’s the holiday season, not finals season. And so my rage and disappointment in the falafel guy simmers. Very swiftly I mentally change my “No TechCash” policy to “No Falafel Left Behind” and inform him I’m sorry, it’ll just take a second and I was seriously misguided – for me to sprint back up to the fifth floor and deposit money into my account. 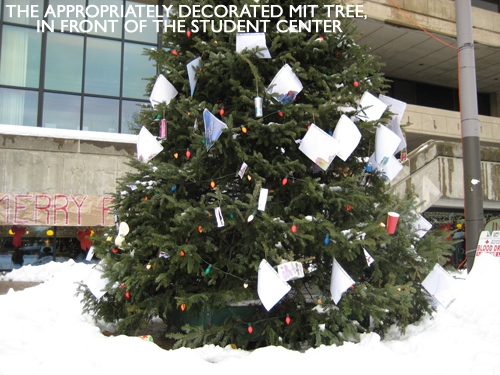 I’ve learned a few things from my TechCash-less lifestyle – yes, it’s not absolutely necessary, but if you have a debit card it’s a little more difficult to get around if you plan to eat on campus rather than just cook for yourself. (LaVerde’s, Dunkin Donuts, and Cambridge Grill all accept debit. There are a few other scattered places on campus here and there, but those are the main ones.) Generally speaking, though, it’s a pretty effective system, and I like having the freedom to put money as I please (or don’t please), whenever I need it.

I have a lot of pictures to post from our fall dance show, my floor’s formal, and the giant volumes of snow we’ve been hit with lately, as well as entries to write about changing your major, getting accepted (?! congratulations, all of you!), how to get around campus, and how to pick a living group (SO MUCH BLOGGING – so little time) but I’ve still got that silly thing called “finals” in between me and winter break. I’ll be flying home Thursday, so! Until later – 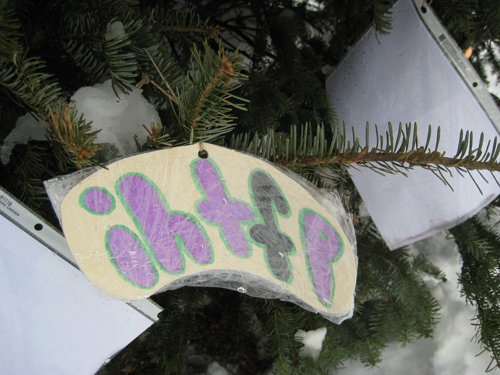