Marilee Jones in the news by Matt McGann '00 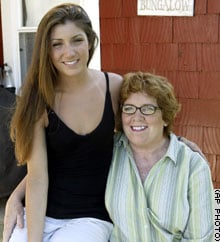 In the news around the country, there’s a story from the Associated Press about our Dean of Admissions, Marilee Jones. According to Google News, the story has been picked up by at least 67 news organizations, from rural Saskatchewan to southern Mississippi. Most prominently, it’s currently on CNN.com, with a nice picture of Marilee and her daughter (at right). We in admissions are all proud to work for such an inspirational boss. (Plus, what other admissions dean would rock out at Battle of the Bands?)

CAMBRIDGE, Massachusetts (AP) — Though just teenagers, the applicants to the Massachusetts Institute of Technology are a scarily accomplished lot. They have started businesses and published academic research. One built a working nuclear reactor in his garage. In their high schools, they have led every extracurricular club and mastered the SAT.

But surprisingly few have done what Marilee Jones, the woman who actually decides which one in seven MIT applicants gets in, thinks 18-year-olds ought to be doing.

Not many sleep eight hours a night, or eat three meals a day. Few spend time each day just staring into space.

And Jones is blunt about the consequences.

The quest for perfection “is making our children sick,” the MIT dean of admissions told a recent gathering of college admissions professionals in Boston. She means it literally, snapping off statistics on the increase in ulcers, anxiety disorders and control disorders such as cutting and anorexia.

“Kids aren’t supposed to be finished,” she said. “They’re partial. They’re raw. That’s why we’re in the business.”

For years, high school teachers and counselors have been complaining about the emotional and physical toll of the competition for slots in selective colleges. SAT prep classes and an arms race of extracurricular resume-building, they say, are draining the fun out of life for their students.

College officials have been slower to see it as a problem — though, finally, that may be changing. A group of presidents from prominent colleges has been talking behind the scenes about possible steps to “lower the flame” — to use the buzz phrase — surrounding colleges admissions. And Harvard made a surprise announcement last Tuesday that it would eliminate its “early action” round of admissions, partly on grounds it contributes to admissions anxiety.

Jones, who sports a shock of red hair, speaks bluntly and loves the Rolling Stones, is neither quiet nor behind-the-scenes by nature. Nine years as dean, and the mother’s-eye view she got of college admissions last year, have persuaded her something is wrong. Now, from the surprising pulpit of a university famous for its overachievers, she has become perhaps the field’s most visible and outspoken champion of revamping admissions — and certainly the sharpest critic of colleges themselves for their complicity in the problem.

The answer may not be as easy as it sounds. A 2005 survey by consulting firm Noel-Levitz found the average four-year private college now spends more than $2,000 to recruit each student it enrolls.

The losers are students.

“The thing we see over and over again is how tired (students) feel, the extent to which they don’t enjoy their senior year, which is supposed to be the big payoff of the high school experience,” said Rod Skinner, college counseling director at Milton Academy near Boston, where Jones recently spoke. “Marilee is really getting at how these students feel.”

The issue hasn’t always been at the top of Jones’ agenda. A scientist by training, she was hired by MIT’s admissions office in 1979 to help recruit more women, then just 17 percent of the student body. By the time she was appointed dean in 1997, that figure had grown to 39 percent.

Now, nearly half of MIT’s incoming undergraduates are women, as is its president. But as that issue’s urgency faded, Jones began noticing some other troubling trends in admissions.

The phone calls from parents seemed more frequent, and pushier. And Jones grew increasingly worried about the applications that crossed her desk. The students were remarkably accomplished, but she worried the resume rat race had quashed creativity. Would future MIT graduates make world-changing discoveries, she wondered, or merely execute the discoveries of others?

MIT faculty told her many students just weren’t much fun to teach. The issue of perfectionism had been brought painfully to the fore at MIT by a series of student suicides. Students “want to do everything right, they want to know exactly what’s on the test,” faculty told her. “They’re so afraid of failing or stepping out of line, that they’re not really good students.”

Meanwhile, Jones was starting to see the college admissions process — the mailings, the emphasis on activities, the pressure to apply early-decision — through the eyes of her daughter.

“When she was in sixth or seventh grade, I was every bit as bad as the parents I’m talking about,” Jones says. “Little by little, I started watching her get affected by that pressure, and I realized that that pressure came from me.”

“I was sending her a message: ‘You’ll never get in anywhere,”‘ she said. “That was my fear.”

But two things ultimately transformed Jones’ concerns into a cause. One was a series of conversations about adolescent health with pediatricians, like Kenneth Ginsburg of Children’s Hospital in Philadelphia, her co-author on a new book: “Less Stress, More Success: A New Approach to Guiding Your Teen Through College Admissions and Beyond.”

“The more time I logged with the doctors, that was what threw me over the edge,” Jones says. “I went from being an advocate for change to really being on fire on this.”

The other was a simple conversation with a high school student after she gave a talk. He asked her if MIT really required 10 extracurricular activities. Jones wondered aloud why he would think that. The student pulled out MIT’s application and showed her: next to “extracurriculars” it listed 10 lines for students to fill in. For the first time, Jones says, she saw MIT’s application as a student sees it. She completely rewrote it.

“That’s when I realized there’s what we say and what they hear, and they’re really different,” Jones says. “We’re raising a generation of kids trained to please adults. Every day kids should have time when they’re doing something where they’re not being judged. That’s the big difference with this generation. They’re being judged and graded and analyzed and assessed at every turn. It’s too much pressure for them.”

Many in the admissions field admire Jones, though with mixed feelings about her prospects for winning this fight.

“When you meet her, she looks you in the eye in a way that none of the other Ivy League deans do,” Thacker said. “It’s just the way she’s put together: There’s a glow to her. She’s got this red hair, and she’s out there and energetic. She lives close to her values and her work.”

But can one person change the admissions game?

“She’s probably a little bit more bullish than I am, a little more optimistic,” said Tom Parker, dean of admissions and financial aid at Amherst College, who has spoken on a number of panels with Jones.

She probably won’t persuade many parents that it really doesn’t matter which colleges accept their children. Nor will it be easy getting other colleges to tone down their recruiting. Many struggle simply to fill classrooms and don’t have MIT’s luxury of limitless talent to pick. And even MIT’s highly selective peers care about rankings; in the marketing arms race, they aren’t likely to unilaterally disarm.

“I think it is very tough for her to do this given the traditional group of colleagues and the kind of unwritten rules and habits and relationships that exist,” Thacker said. “There are conventions, and in many ways, she’s a rebel.”

Jones says she understands the pressures.

“What I’m asking my colleagues to do would get many of them fired,” she said. “I get it.”

But there are encouraging signs. Jones says she was “thrilled” by Harvard’s decision to drop early action. Five years ago, she says, nobody wanted to hear her talk about overscheduling; they just wanted to know how to get into MIT. Now she gets 10-15 speaking requests per week.

After Jones spoke at Milton, Skinner said, parents peppered him with requests of copies of her presentation.

“Every time I do a presentation there’s at least one orthopedic surgeon in the audience who will come up to me and say, ‘You’re not even talking about sports injuries,”‘ Jones says. “Then somebody else will come up and tell me about high school theater and what the theater coaches expect.”

What Jones can control is MIT, and there she has tried, at least, to change the tone.

On MIT’s application, students are still asked about activities, but there are fewer slots to list them, and there is less emphasis on awards and prizes. This year she’s dropping the lines for students to list Advanced Placement exams so as not to signal any expectation.

Jones has also rewritten MIT’s guidelines to interviewers, telling them to look for a good match, not robots with resumes. She has told MIT’s admissions marketing company to stop sending material to high school sophomores.

Those things count, says Bradley Edwards, an MIT senior who has worked closely with Jones as a member of MIT’s admissions advisory committee. He recalls being turned off to other schools by their applications when he was looking at colleges.

Jones hopes someday to see MIT make standardized tests like the SAT optional for applicants. A growing number of colleges have stopped requiring standardized tests, though none of MIT’s reputation, and for MIT to do so would send shock waves through the field. (Jones acknowledges that persuading MIT’s faculty to go along is a long shot and is doubtful it will drop early admissions as Harvard did).

None of which is to say Jones is dumbing down MIT. Interesting but indifferent, creative but lazy, still won’t cut it. Intel Science Fair winners and other academic superstars still prowl MIT’s campus, and average SAT scores are still through the roof. Very few applicants outside the top 10 percent of their high school class get in.

But Jones, Edwards says, won’t hesitate to reject an accomplished student if she doesn’t feel the personality and MIT fit each other. She’s also set aside about 10 percent of her precious admissions slots for people with some kind of spark that the system generally does not reward.

24 responses to “Marilee Jones in the news”