Because you're just so thirsty for what I have to say and all.

It was just another Thursday night, the 350th day in the 50th week of 2011 and 282 days ago, no big deal. More importantly, it was the day on which early action decisions came out. (Only 23 hundredths of a year for the same time to come around already, yikes!)

I went to an all-girls Catholic high school in the south side of Chicago, you see, and I was still wearing my uniform–polo shirt and plaid kilt–as I danced/ran/frolicked/squawked various versions of the word “yay” around my house after I had opened the web page notifying me that I was accepted to The Institute.

I do often like to speak in analogies, and it has nothing to do with the fact that the word contains my name, I promise. There is, however, one analogy for which I cannot be completely credited. In fact, it’s a rather well-known phrase here: MIT is like drinking from a firehose. Now that I look back on it, that letter was asking me if I was thirsty. Actually, in my case it was more of a conversation, since there’s nothing odd about a mental reply to inanimate objects.

MIT: “May we offer you a drink of life’s water, a water so replenishing and different from what you’ve ever experienced, that it will become a part of you and you will be infinitely quenched and satisfied with things to do, learn, ponder about, and with which to have absolute fun? Look, we even put together this contraption to make it easier!” 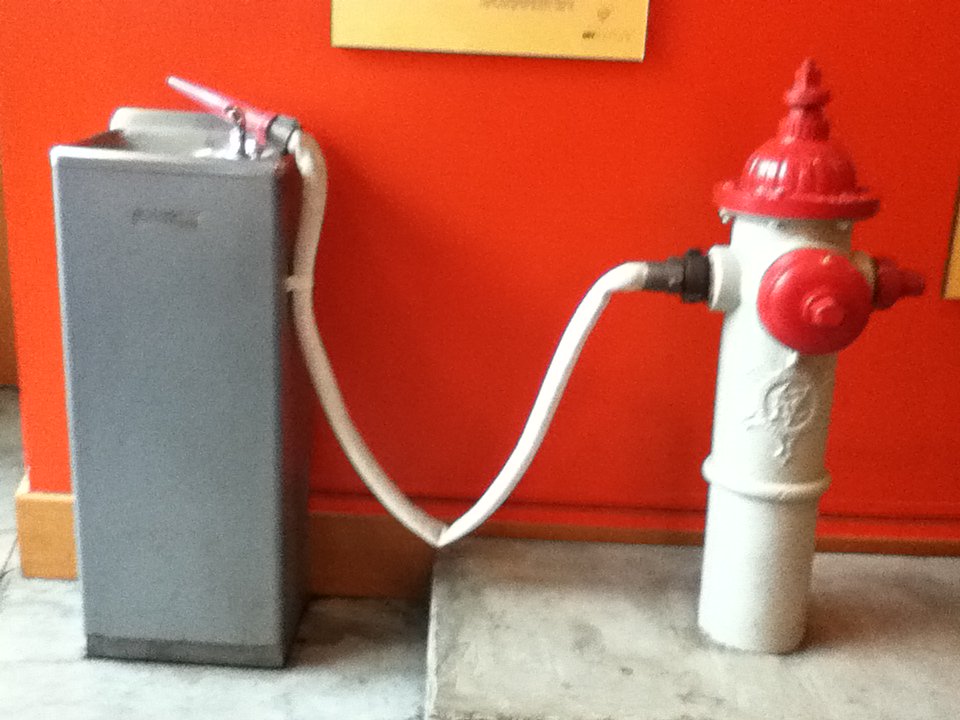 When I found this fire hose water fountain at the Stata Center, I just HAD to take a picture. I’ve been here for only a month, ’tis true, but I can attest to the fact that it IS like drinking from a fire hose. Perhaps to some it may seem menacing–what is life water anyway and why do I want it to such an extreme!? Does this mean that I will never be able to sleep again? Will I have time to do everything I want to? WHAT IS LIFE WATER ANYWAY? Brace yourself. A short description of my weeks here and a whole lot of pictures will probably answer your questions. 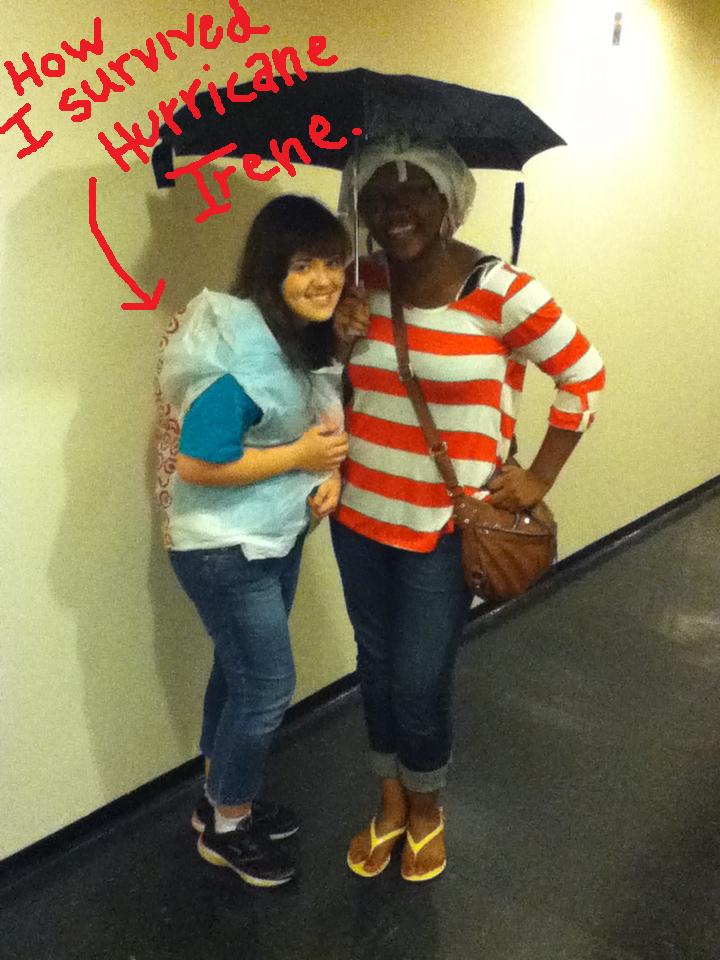 Week 1: I live in Burton Conner, and even the very first day I entered my room I felt understood and like I belonged This was namely because my door welcomed me with some pretty relatable stickers: 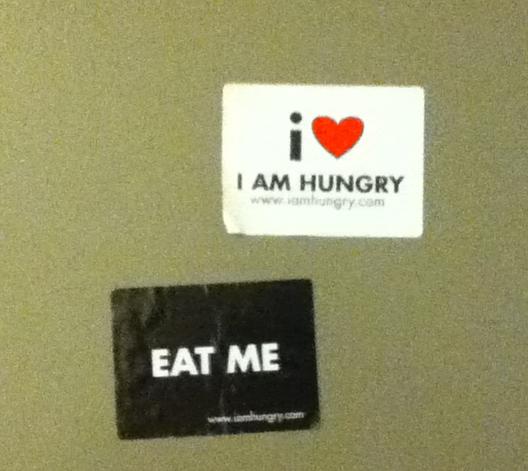 I got here the week of Aug 21 (a bit earlier than most people) because I did the most wonderful FPOP, the Freshman Leadership Program. This tiny description doesn’t do it any justice, but rest assured it was amazing. There was always something to do, and meeting new people as well as deep thinking about the world in general kept me hydrated. It was life-changing. Also,  Week 1 was also the week I braved a hurricane with a Target bag. Way to be an engineer, right?

Week 2: ORIENTATION (a.k.a. Mad-crazy free food all around!) I’m not on a meal plan (because I like to cook), thus it was so nice not having to worry about cooking as I explored around. I did so many things, there is DEFINITELY too much to tell, but I present to you the highlights: 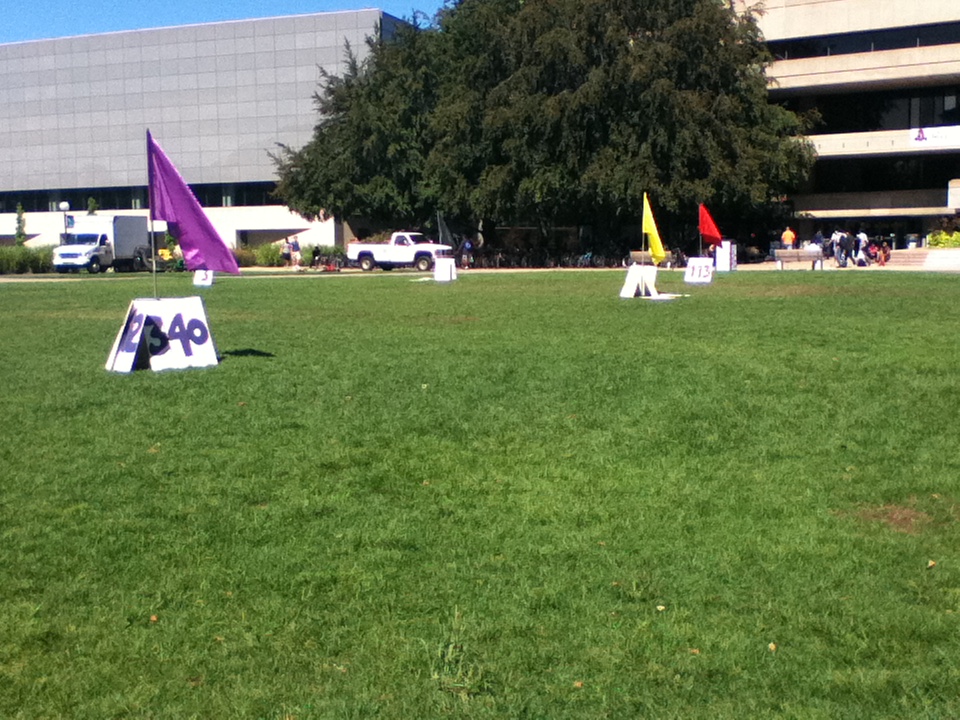 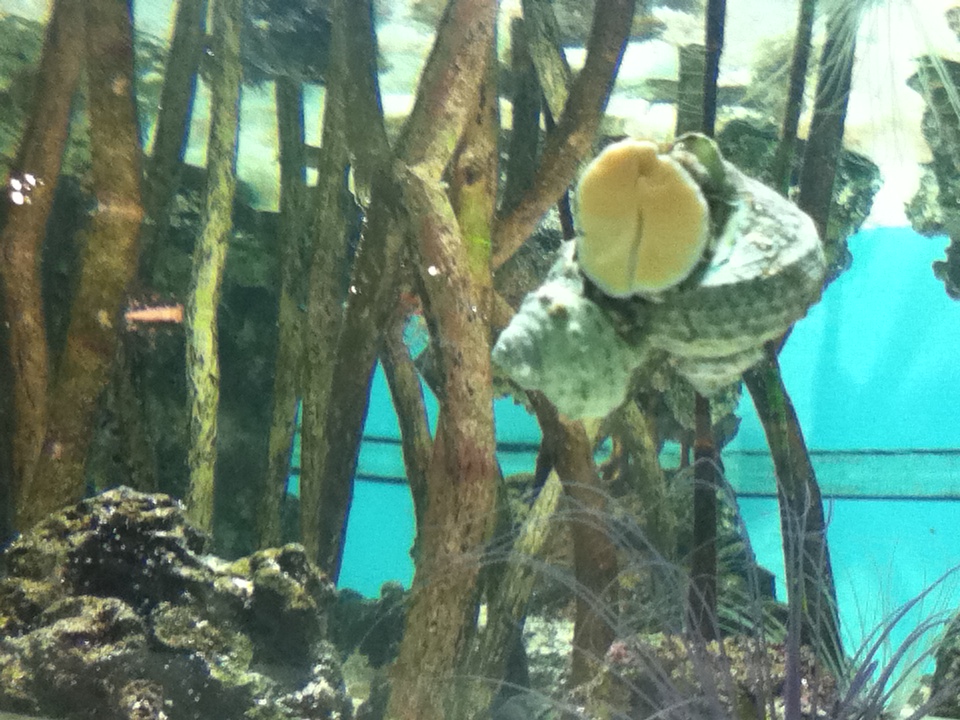 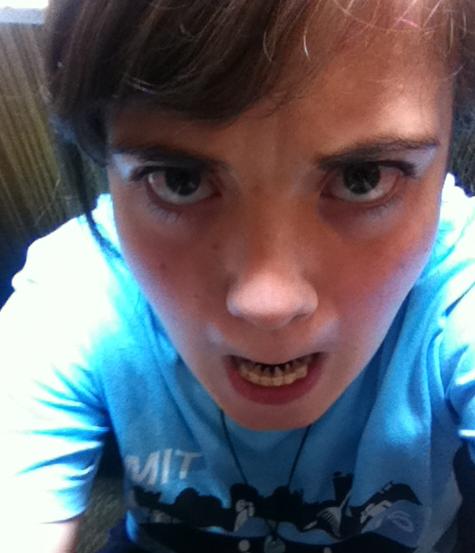 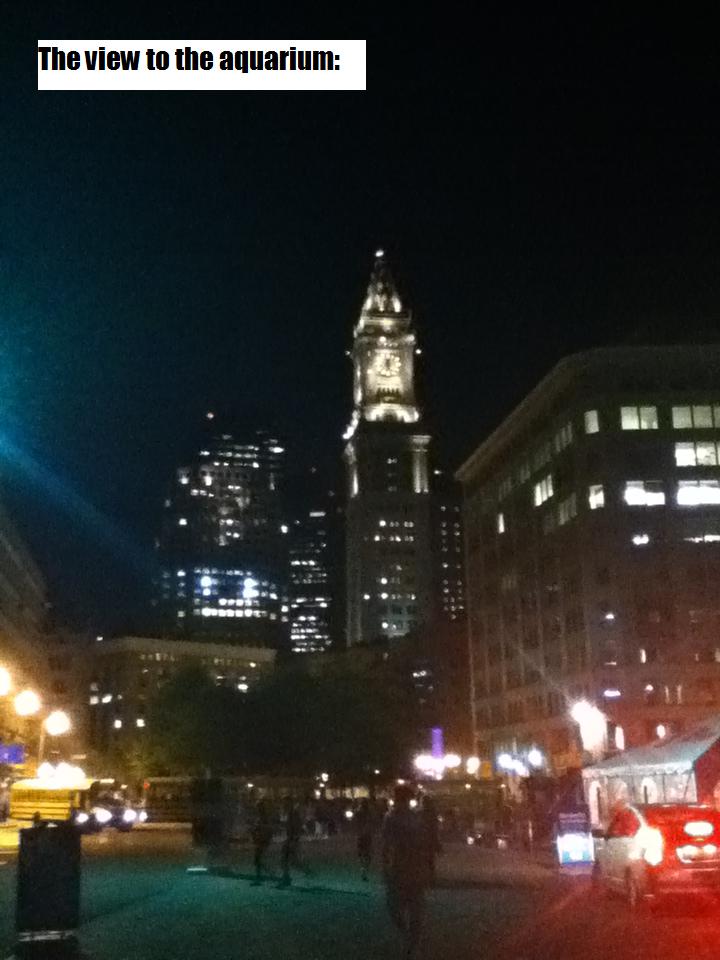 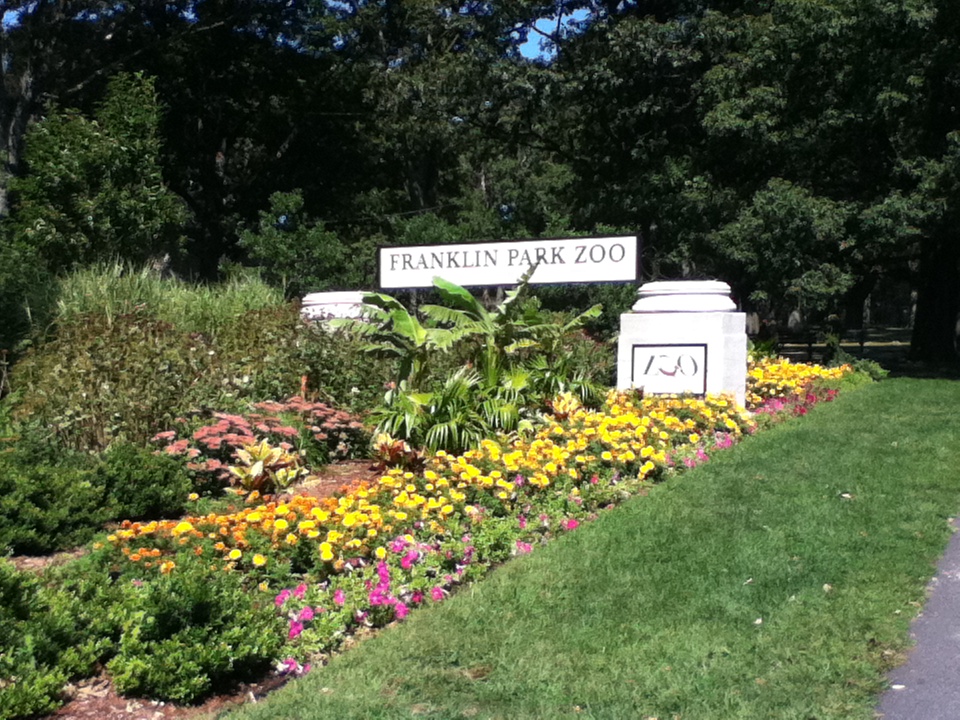 Week 3: Consisted of unpacking, venturing Boston to find things I needed, meeting more people, getting ready for classes, more unpacking, discovering that one of my biology instructors also wrote the biology book we’ll be using (!!), getting more free food from various organizations in which I was interested, and getting my side of the room to look something like this: 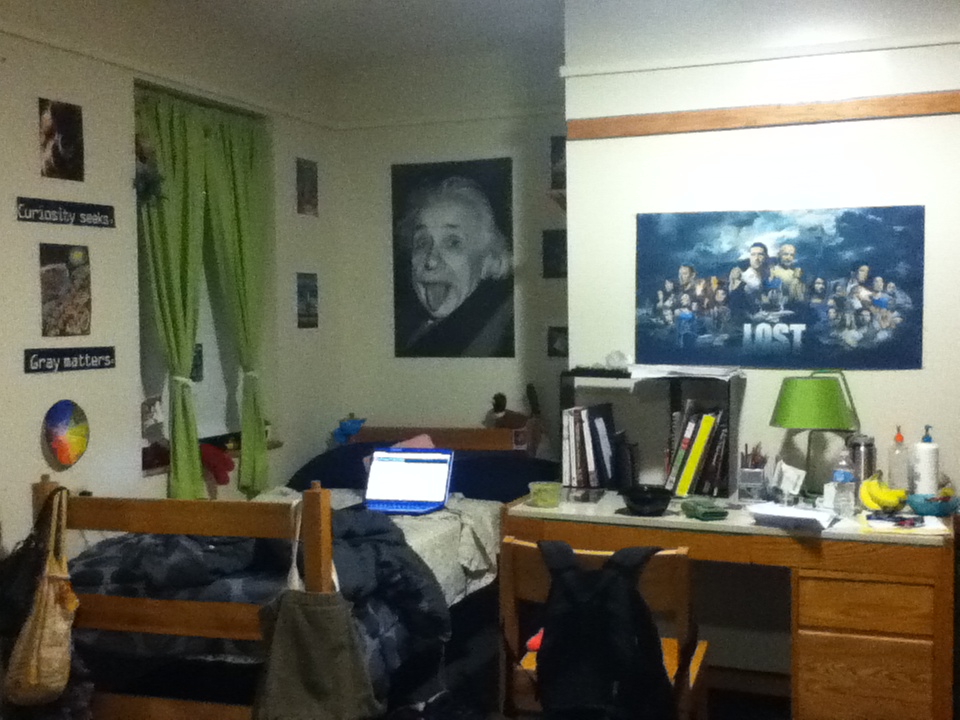 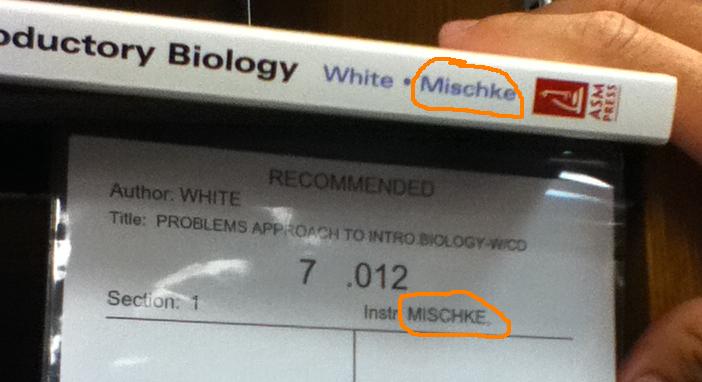 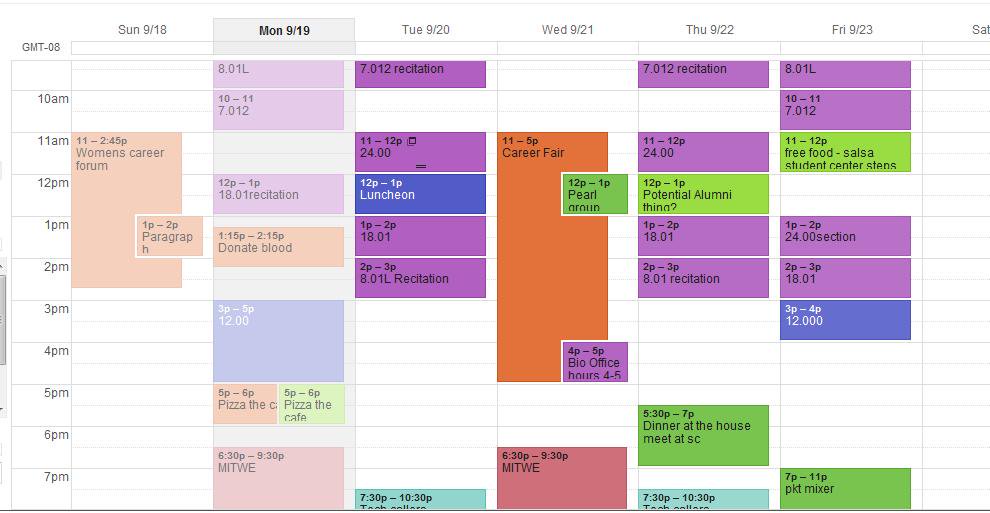 Week 4/5: These weeks I’ve spent adjusting to MIT classes: 7.012 Intro to Biology, 8.01L Physics I, 18.01 Calculus I, 24.00 Problems of Philosophy, and 12.00 Mission (or Solving Complex Problems). I’ve also joined the MIT Wind Ensemble (MITWE) on trumpet. (More on my classes later.) Before these weeks, I had never used Google calendars in my life. Now I don’t know what I’d do without it, its color-coded glory, and it’s ability to sync with my ipod. Also, I don’t know how I had time to bake brownies, but I fit in somehow! They were oh so good. 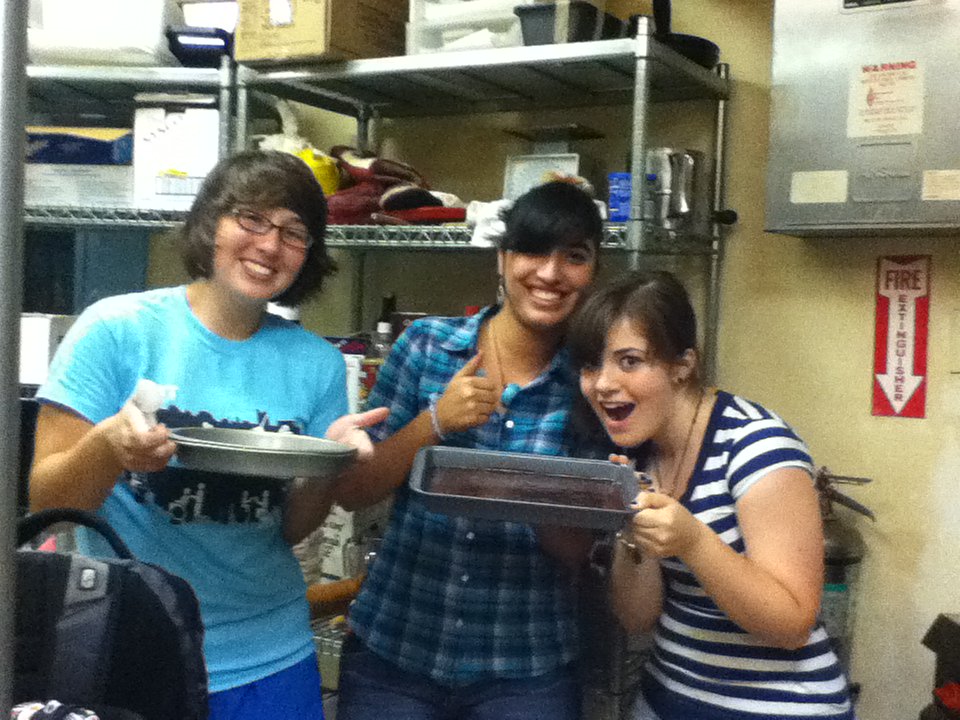 So that’s been my very, very brief tour through my weeks thus far here as a student. I hope I didn’t drown you in too many pictures! Whether you believe me or not, I wish I could have told you more. There is ALWAYS something to do here!! (That’s why visiting is so important if you’re considering studying at MIT!) But for those of you that can’t, what do you want to know? And to everyone in general: what would you like to see next on this blog? :D

It’s true. MIT is like drinking from a fire hose, but as Brian  O. posted a while ago, you get so much more than water.

9 responses to “May we offer you a drink of water?”