Mind and Hand by Snively '11

I’ve already mentioned how busy I am this semester and have gone over my schedule, but now it’s time to show just what I’ve been busy with! One of my classes, 2.008, focuses on manufacturing and machining, meaning that we learn to *gasp* manufacture and machine things.

MIT has always bragged about its motto, “Mens et Manus,” or “Mind and Hand,” because we’re constantly creating, building, and getting dirty. I’ve done my fair share of building since I’ve gotten here (plastic bottle pirate ship, 4 robots, an Olmec, etc) but all of that used skills that I really already had. This last week, however, I learned something new. I learned how to use a CNC lathe and a CNC mill.

For those of you who are unacquainted, a lathe and a mill are tools used to machine metal/plastic/anything that needs to be shaped into a part. A lathe is for radially symmetric features and spins your part really fast, letting you touch it with sharp tools to cut grooves, pockets, round edges, so on and so forth. A mill is essentially the lovechild of an etch-a-sketch and a drill press. Using two dials you can move your part around on a table (like an etch-a-sketch) and then when you pull a lever you can lower a drill bit into it (like a drill press). The main difference is that you can move the part around while the drill bit (actually called an “end mill”) is in the part, cutting grooves, notches, and all sorts of neat shapes into it. The “CNC” means that these tools are computer controllable. Come on, you know how hard it is to make a circle on an etch-a-sketch! CNC lets you design parts in SolidWorks, import them into a program called “MasterCAM,” and then load them onto the mills/lathes. Then the tool does all the work for you, spitting out a finished part in just a few minutes. Neat, huh?

Later in the semester we’ll be using these to create aluminum molds to injection mold yo-yos with. Until then, we were assigned a “Learn to use the equipment” project of machining a paper weight. Each of us was given a piece of aluminum stock, 1.5″R with a height of .625″. We were allowed to do pretty much anything possible, but we had to use both the lathe and the mill. We designed our paper weights in SolidWorks first, the easiest way to bust out a 3D part.

I didn’t want my paper weight to suck. This had the potential to be a really nice product, something that I could keep forever, so I got a kind of intricate with my design. I decided to machine the great dome, with some special features. Here’s what my finished SolidWorks file looked like 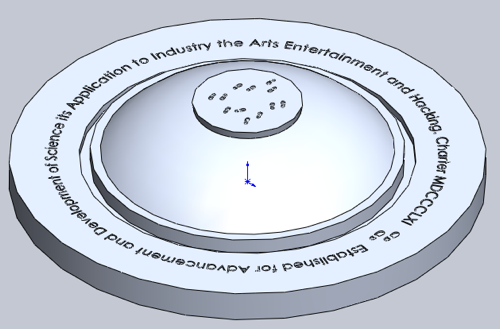 As you can see, I added some footsteps to the top of the dome, because I’m pretty sure there are some. I also put the “Inscription Hack” around the perimeter of the dome. Awesome, looks good in SolidWorks, how’s it going to look in real life?

The first thing to do was to “turn” the part. Never say “lathe” the part, it’s called “turning.” We put my aluminum stock in the machine, closed the doors, and checked through my code using the control panel on the outside. If there is anything more intimidating I have yet to encounter it. It was the scariest thing ever, but luckily shop guys are VERY good at what they do. Please note that that hand is certainly not mine. 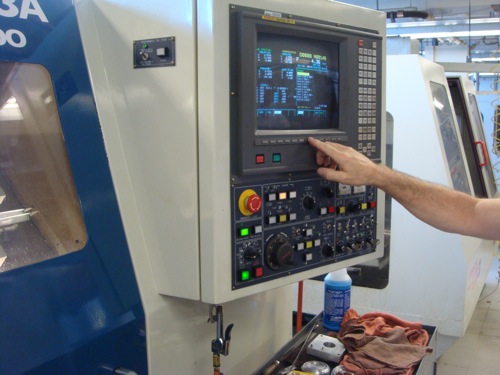 Once it was all set we hit “GO” and off it went! The part spun and the tools cut into it. There was a lot of coolant splashing everywhere so it was hard to get really good pictures, but here are a few I managed to get. 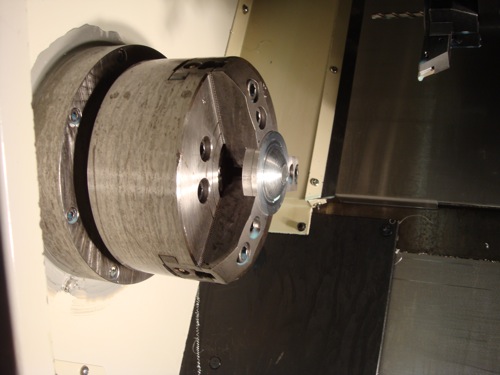 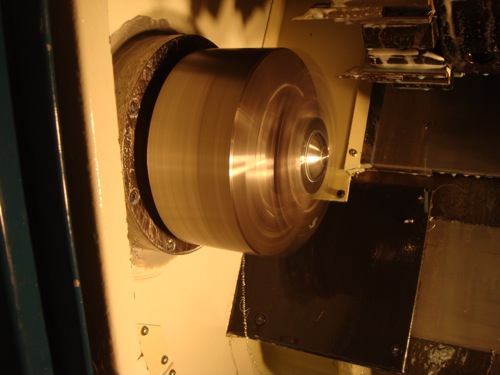 I made a video of the final run of the paper weight so you can see the lathe in action.

Without a CNC I dare you to get that kind of curve. Consider yourself dared.

So, I had a perfectly shaped little dome, next it was time for the mill. The mill was programmed to etch the writing and the footsteps into my paper weight, one at a time, using an engraving tool with a tip only .02″ in diameter (TINY!). I popped the part into the vice, set my zero at the top of my part, and pushed “GO!” ~20 minutes later (lots of etching) it was all finished, but while it was being etched it looked like this 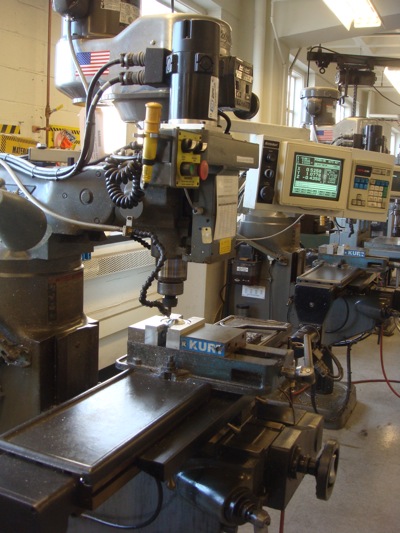 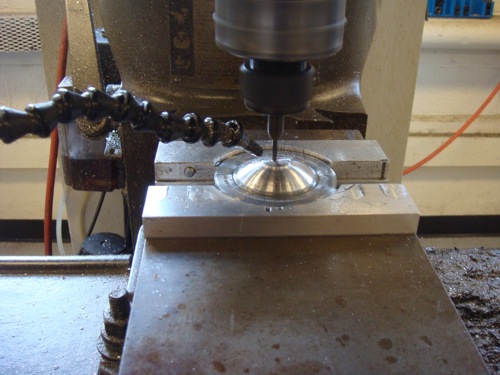 Finally it was all done! Well, sort of. I cleaned it up with a rag and some hot water, then I took it over to a normal lathe (not CNC) and let it spin while I touched it with some fine grit sandpaper to polish it. When everything was all said and done I had this lovely before and after picture to take 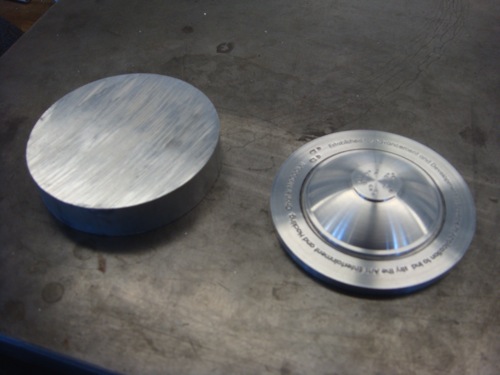 Isn’t that awesome!? But, there was an issue. Well, there were two issues. I realized shortly after polishing it up that there was a “u” missing “Industry.” The space was there, just no letter, so it looked like “Ind stry.” Not good. Then I noticed that I spelled “science” as “sceince.” Those of you who know me know that I am WAY too obsessive compulsive to be ok with this, so I ended up re-machining the whole thing after making the changes on the computer.

When everything was all said and done, I had a beautiful paper weight that I was really proud of. Will I make another? Potentially, the code is all there. Will I make many awesome things in the future with my newly learned skills? Absolutely. 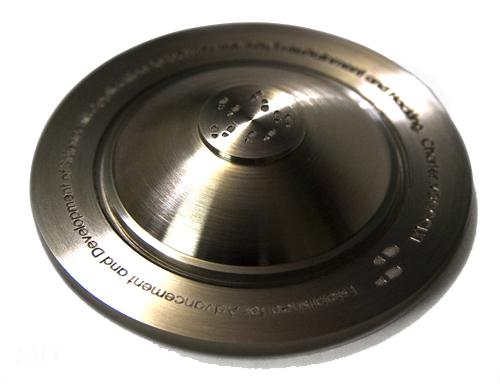 27 responses to “Mind and Hand”