I’ve talked about how humor, networking, and great ideas are all important items that engineers should add to their personal wish list. Now it’s time to blog about something I feel particularly passionate about: public-speaking.

Whenever I tell people I’m a theater minor at MIT, there are the occasional snickers, like “why does a chemical engineer want to be an actor, too?” But to me, it’s not about acting. Fundamentally, it’s about being comfortable standing in front of an audience and trying to convince them of something. GEL has taught me that this can mean the difference between killing a company presentation or missing yet another promotion.

Perhaps this is what led Tony Eng, a course VI senior lecturer, to organize the inaugural MIT Can Talk speech competition this IAP. He learned about a similar event at Harvard, and decided that MIT would be the perfect setting to show that engineers can communicate through words as well as they do through numbers and figures. The theme? Proving Them Wrong. Contestants had 4-5 minutes to engage a panel of judges (representing all 5 academic schools at MIT) and a lecture hall full of eager audeince members. The moment I heard about the competition, I registered and started brainstorming speeches. As a senior, I wanted my last IAP to be truly memorable, and this was the perfect project for me to pass time between Track practice and French class.

I must have gone through at least three speeches (Barbara Streisand lyrics—too optimistic; “The Fool’s Prayer” by Edward R. Sill—too short; an original piece—too much writer’s block) before settling on my final topic. I asked myself if there is one person I could talk about until the end of time, and my answer was Julia Child.

Julia Child was a cook, not a chef. She grew up in Pasadena, CA, went to Smith College in Massachusetts, and worked for the US government, travelling the world from assignment to assignment with her husband, Paul. They finally settled in Paris, where Julia began to take lessons at Le Cordon Bleu cooking school. The rest, including multiple cookbooks and TV programs, is history.

I grabbed an excerpt from her autobiography, “My Life in France,” which is one of my favorite books, and added a conclusion to tie things together nicely with the theme. Speech = Done!

On the day of the qualifying round, it was a crystal clear 50 degree (Fahrenheit, of course, for the international readers) February day in Boston. I got on my bike and just explored Cambridge, killing time until the event began.

This was the perfect time to go to 103 Irving Street. As in, Julia Child’s house. I’ve been meaning to do this all of IAP; what better time to do so than before I jumped head-first into the speech contest?!

A few u-turns and twists and cobblestone sidewalks later, I stood in front of her house. Julia Child passed away in 2004, ten years after her husband, so the house is now occupied by someone else. But it was shockingly simple. No sign. No marker. You’d never know that this was the house where my idol lived at the end of her career. I soaked in the weather, the sight of this house, the silence of the neighborhood, and then rode back to MIT.

Tony hosted “office hours” to help the participants fine-tune their speech, but I was expecting to just use it as practice for talking in front of a crowd. To my surprise, I received a fair amount of feedback on the basic content of my speech. The people in the classroom agreed that my dynamics were good, but I seemed to be “acting” the speech. They recommended that I make it more of a personal story rather than a monologue.

So, with just five hours until the qualifying round, I rewrote my speech. It was still about Julia and contained a few excerpts from her autobiography, but it was told from my perspective. I just started writing why I loved her story and the words came naturally.

The qualifying round was a blur, and within an hour I got an email congratulating me on making it to the final round with 14 other contestants. YES!

When I woke up on Thursday, my mind snapped to thoughts of the speech competition. So nervous! So excited! I spent some time in the pool, and of course I was thinking about my speech the entire time. I decided I wanted a little more humor in the speech, and thought how perfect it would be if I threw in a “Bon Appétit” and “Never Apologize” Julia Child impression. I also added in a part about Julia Child’s cat. That must have been the luckiest cat in the world to live with Julia Child in her early cooking years!

When I walked into the 6-120 lecture hall, about half an hour before the start of the competition, the reality hit me: This is happening. People are going to be in those seats, and I’m going to be standing right there. It was a mix of terror and exhilaration. I rehearsed my speech, and then sat and watched as other participants trickled in one by one. This was when I realized for the first time just how many participants were in this competition.

About halfway through the program, my name was called and I stepped up. My heart was racing. I stood, stole a glance at my track friends sitting in the top left corner of the room, looked at the book in my hand, and then began the most intense four minutes of my last IAP at MIT.

I sat down, confident I’d put forth my absolute best effort. My final product was much better than any of my rehearsals from the past few days, and I couldn’t think of one thing I would have changed. I sat back, relaxed, and enjoyed the rest of the speeches. Contestants interpreted the theme in a variety of ways. Some recited poetry, some considered the meaning of the phrase “proving them wrong,” some told personal stories of their athletics, their family, their history.

Once the speeches were done, we gathered in the lobby outside the lecture hall to enjoy cupcakes from one of my favorite establishments in the Boston area, Flour Bakery. Earlier in the day I joked with friends that even if I didn’t win, I was getting a Flour cupcake, so I was a winner anyway! It was wonderful to talk with the other participants, learn about their backgrounds and how they chose their speeches, and describe the experience to audience members.

After cupcakes, we filed back into our seats. The results for audience choice were up first. Each participant’s bucket was weighed to determine who got the most votes (in the form of poker chips), and Tony wrote the weights on the board, one by one. We saw numbers in the 80’s, 90’s, and then someone got a 137! Back to 90’s, another 80-something, and then—151. Woah. The number was on top of my bin. I was absolutely floored. Another one in the 130’s, another from the 90’s, and then one in the 180’s. This number stood atop the jar for a contestant named Bruna, who told the inspiring story of how a group of MIT students came together to support their friend who was paralyzed in her senior year. Still, with a second place in audience choice, I began to realize I had a real shot at the overall top three. The room settled and Tony read the results.

“Third Place—Anisha.” She stepped down to collect her envelope.
“Second Place — Bruna.” Okay, now my mind is racing.
“First Place—“
Half of me thought, “I have a real shot at this thing!” while the other half wondered, “But it could really be anyone.” Weeks of preparation all came down to–
“Maggie Lloyd.”

The room erupted into more cheers. For a split second, my mind broke. My screen went black, the apple icon came up, and the classic restart tone played in my mind. I stood at the front of the room and tried to comprehend what had just happened. Just like I soaked up the Julia-ness from 103 Irving Street, I wanted this moment to last forever.

As the hubbub subsided and people headed out of the room, I thanked all the judges, no longer sitting with their clipboards and looking intimidating. I thanked Tony, who channeled Ssuperman by putting this event on by himself.

Of course, as soon as I left the room I called my mom, who was at work.

“Hi Maggie, How are you?”
“…I won!” I whispered as I glided down the Infinite Corridor. General excitement and hooplah ensued.

A few minutes later, I was on the phone with my dad when I stepped into the track team locker room, where I just kind of erupted with a “GUYS I WON!” and started jumping up and down. The room was so loud that I had to tell my dad I’d call him back.

After practice, I found this on our white board

Followed by my personal favorite, 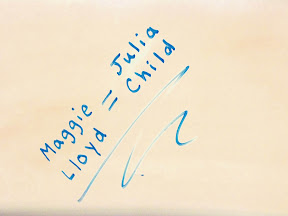 A few days later, I can say the whole event has had time to sink in. Not only did I have a blast preparing for the competition, but I also learned that MIT really can talk! The theme of “Proving Them Wrong” was so perfect to show that MIT students can be just as passionate about public speaking as they are about staying up late to tackle that last pset problem or coming into lab at the end of a long day to finish an experiment. To those who say engineers only speak in numbers, I say we just proved you wrong.

7 responses to “MIT Can Talk!”