Because really, sometimes you just need your own space.

As part x in a y-part series (which is to say that all the bloggers are planning to cover their own dorms within the next z days!), I am happy to introduce you to MacGregor, MIT’s only dorm composed of all single rooms. 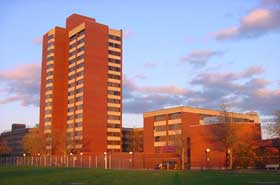 MacGregor may not look like much from the outside (it opened in 1970, and it basically screams “70s architecture”), but it’s home.

The dorm as a whole shares several facilities, such as the laundry room. 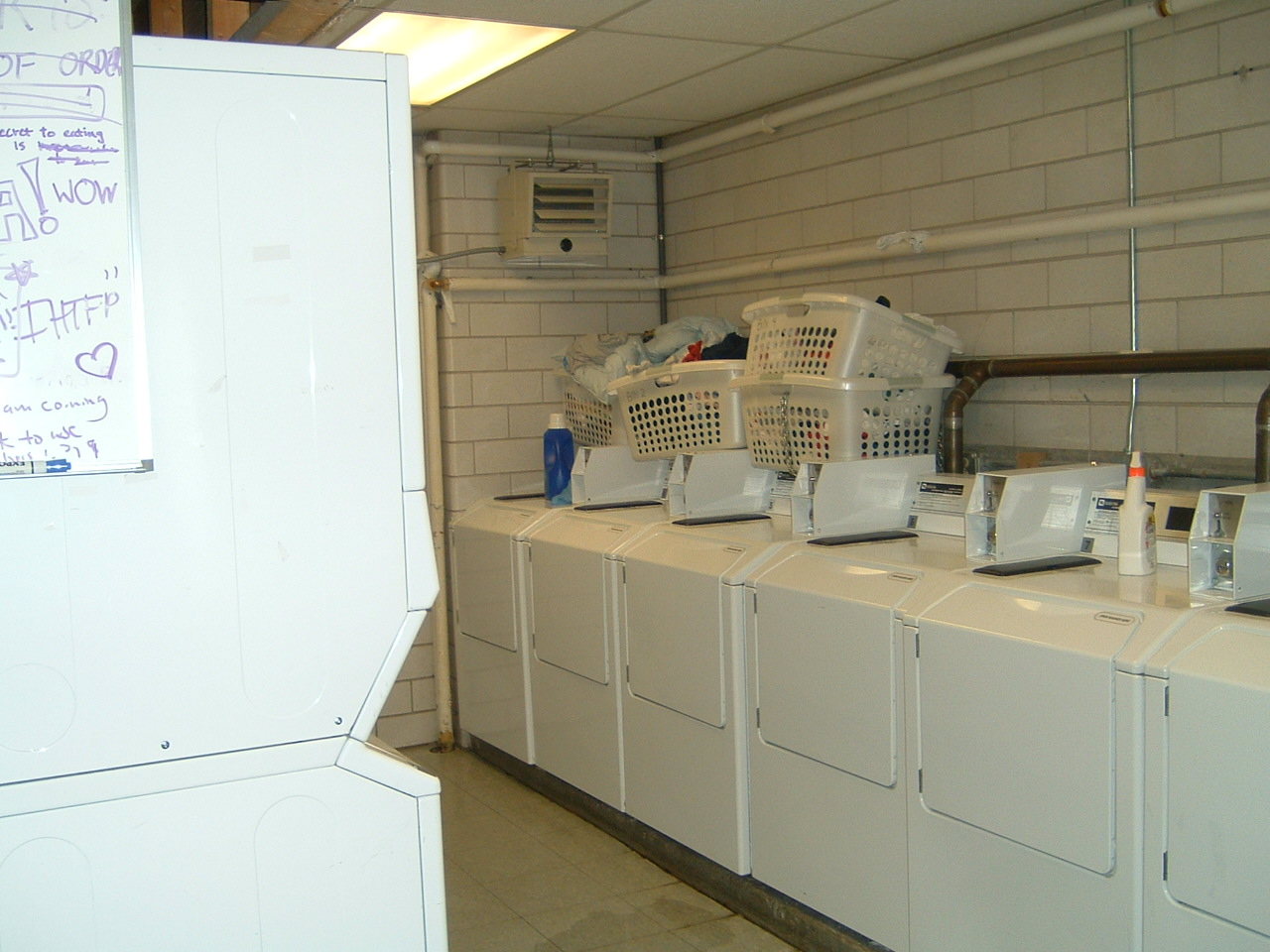 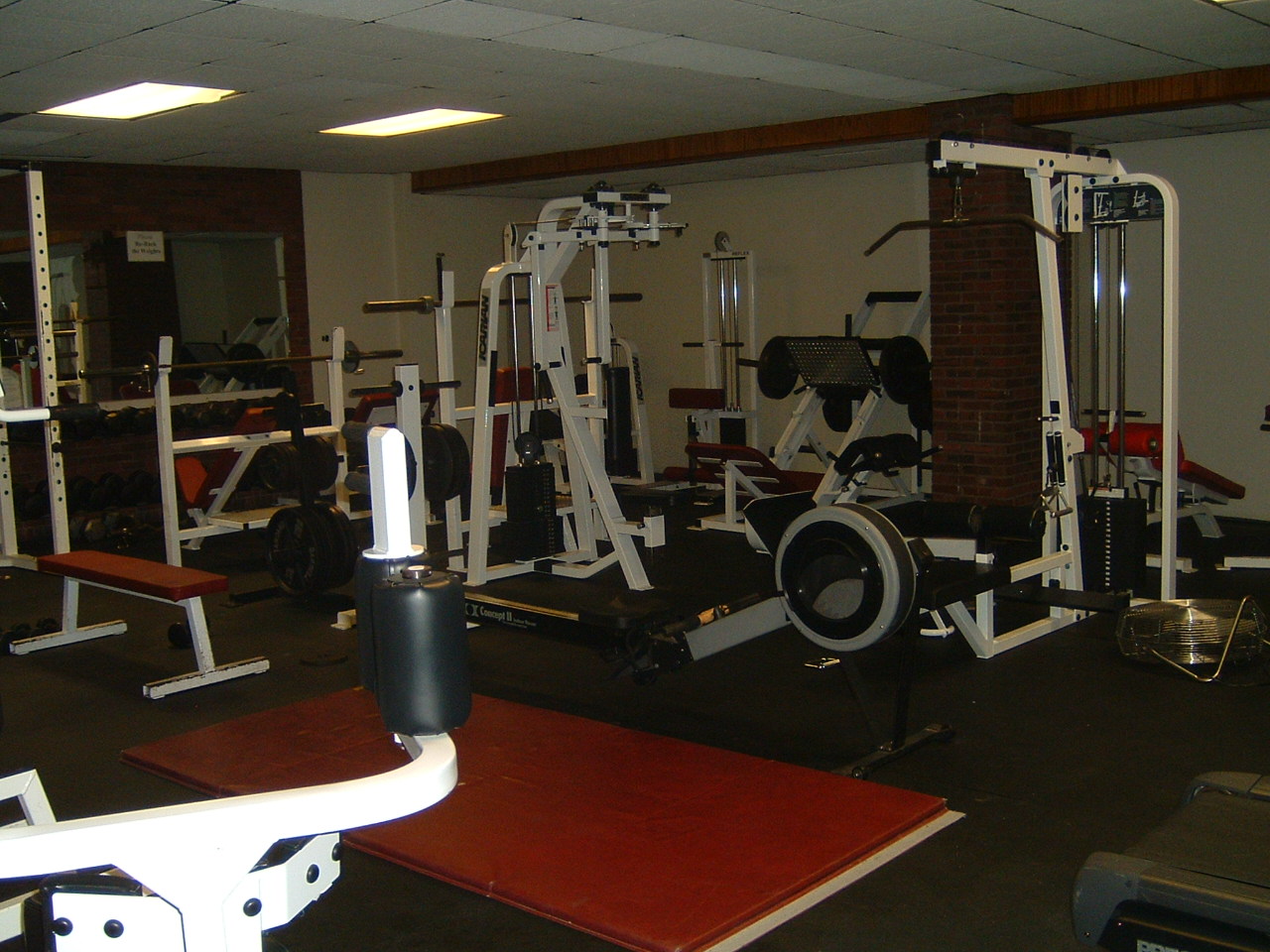 This is excellent when you just don’t want to go outside in the winter, but you also do not want to get fat.

There’s a big lounge called the TFL (Tastefully Furnished Lounge) which is used for dorm-wide events. 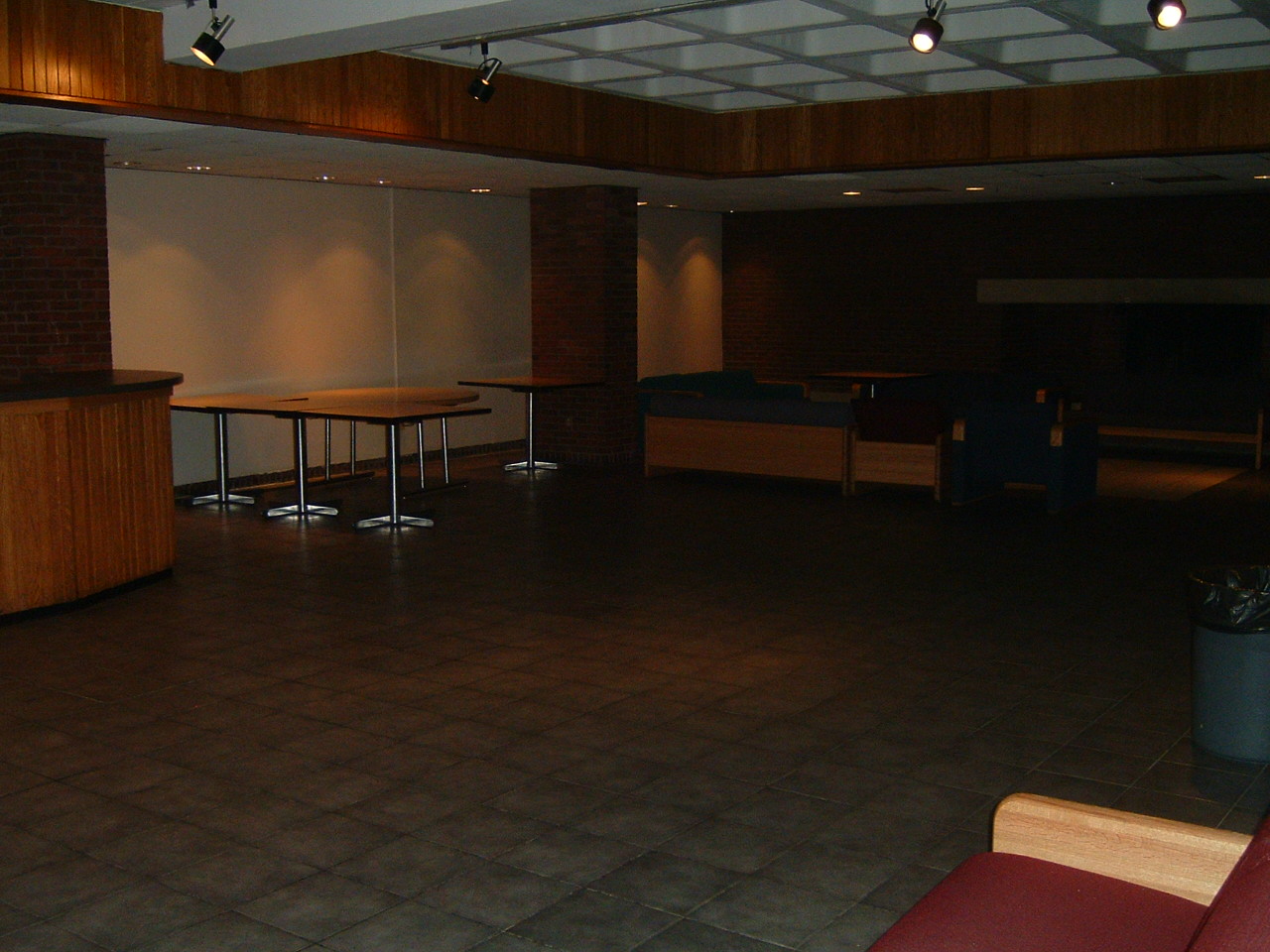 Critically, MacGregor posesses a convenience store on the first floor (MacGregor Convenience, or MacCon) which is open until 2 AM every night. As you might imagine, it’s terribly convenient to be able to run downstairs if you run out of pasta. Or Mountain Dew. 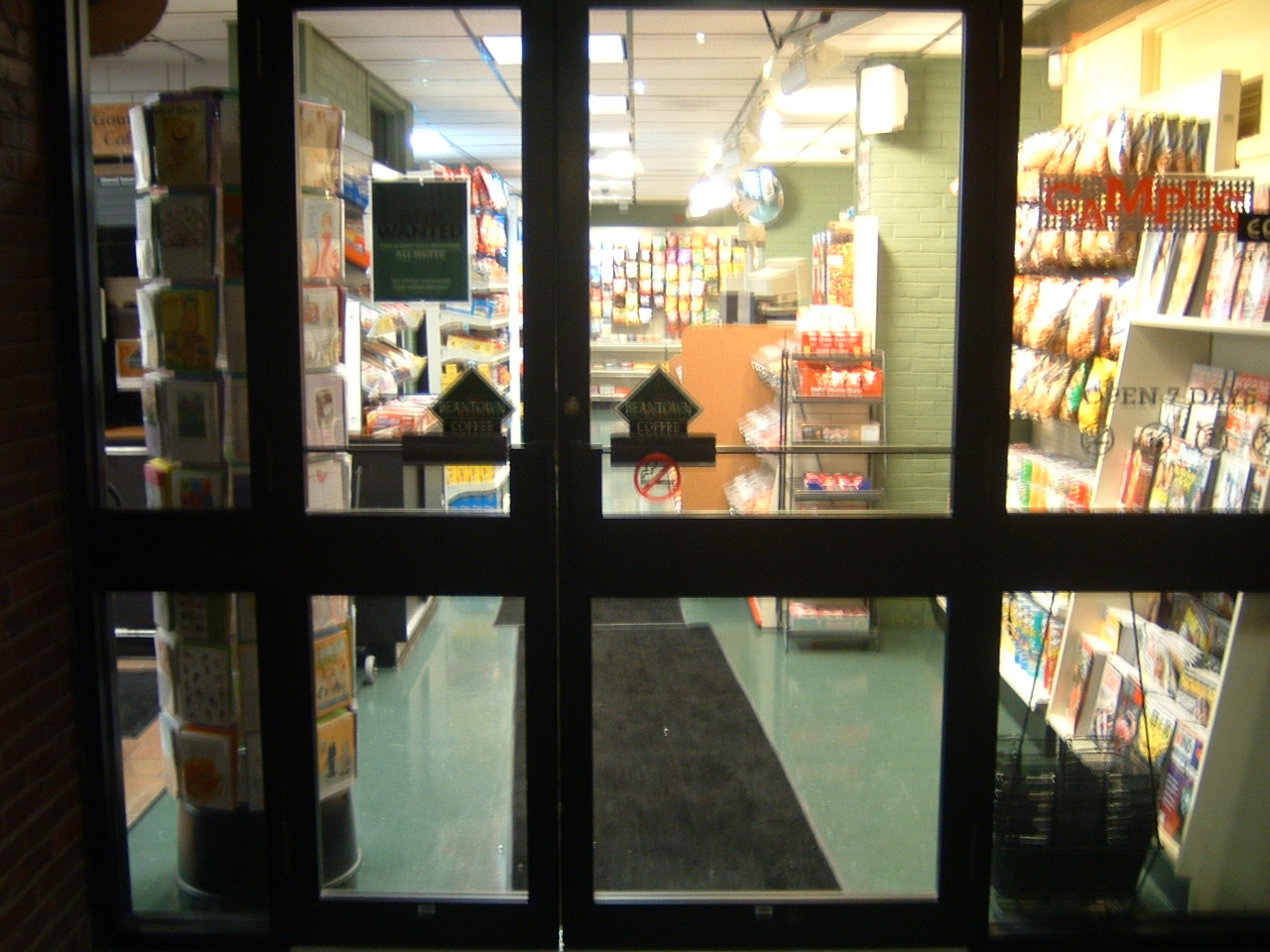 MacGregor is divided into nine “entries”; an entry forms the basic social unit of the dorm. The entries are named by letter — A, B, C, D, E, F, G, H, and J — and there’s no I Entry (because i is imaginary! Bada-bing). As you can see from the picture at the top of the page, there’s a high-rise (16 floors total) and a low-rise (4 floors total). A Entry, B Entry, C Entry, and D Entry are in the high rise (A at the top, B next, etc); the other entries are in the low-rise.

Each entry has between 32 and 48 residents, and shares a common lounge and a nice chunk of money to do with it what they wish. 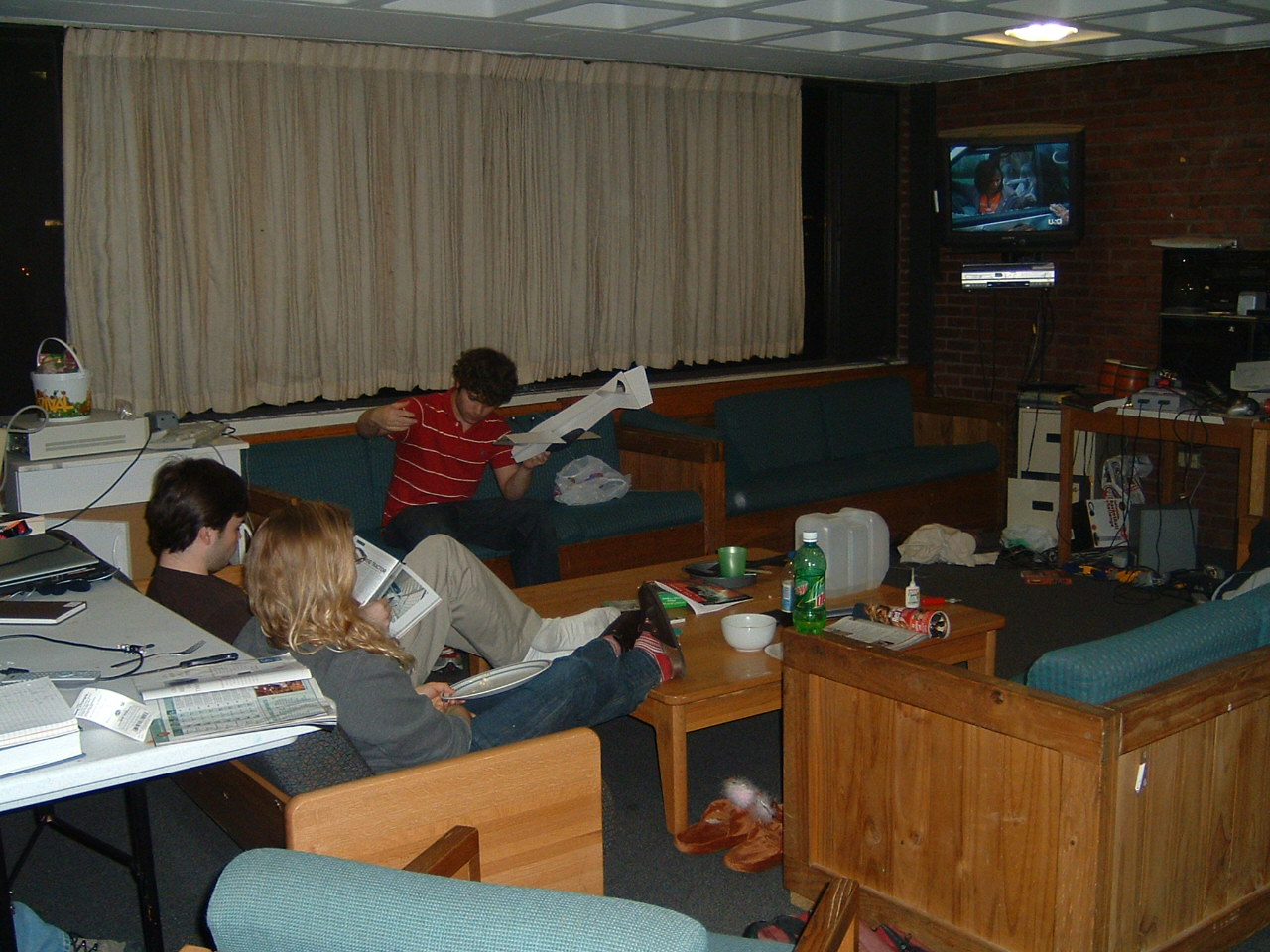 My entry, for example, bought the shiny DVD player, a surround-sound system, the most ridiculous remote control known to man, and a pool table with our entry funds. Entries can also use the money to go out to restaurants or Red Sox games; G Entry bought a big-screen TV a few years ago. Entry lounges are usually a place where everyone hangs out, eats dinner, watches TV, and generally wastes time. (Some people do their homework in the lounge too… I’ve never been good at that.) At any given time, there are usually five or six people sitting in my entry’s main lounge doing some combination of the above.

Entries are divided into suites. Suites in the high-rise are either six or two single rooms, and suites in the low-rise are eight single rooms. Each suite shares a common suite lounge, which can be a place for the suite to study or party. 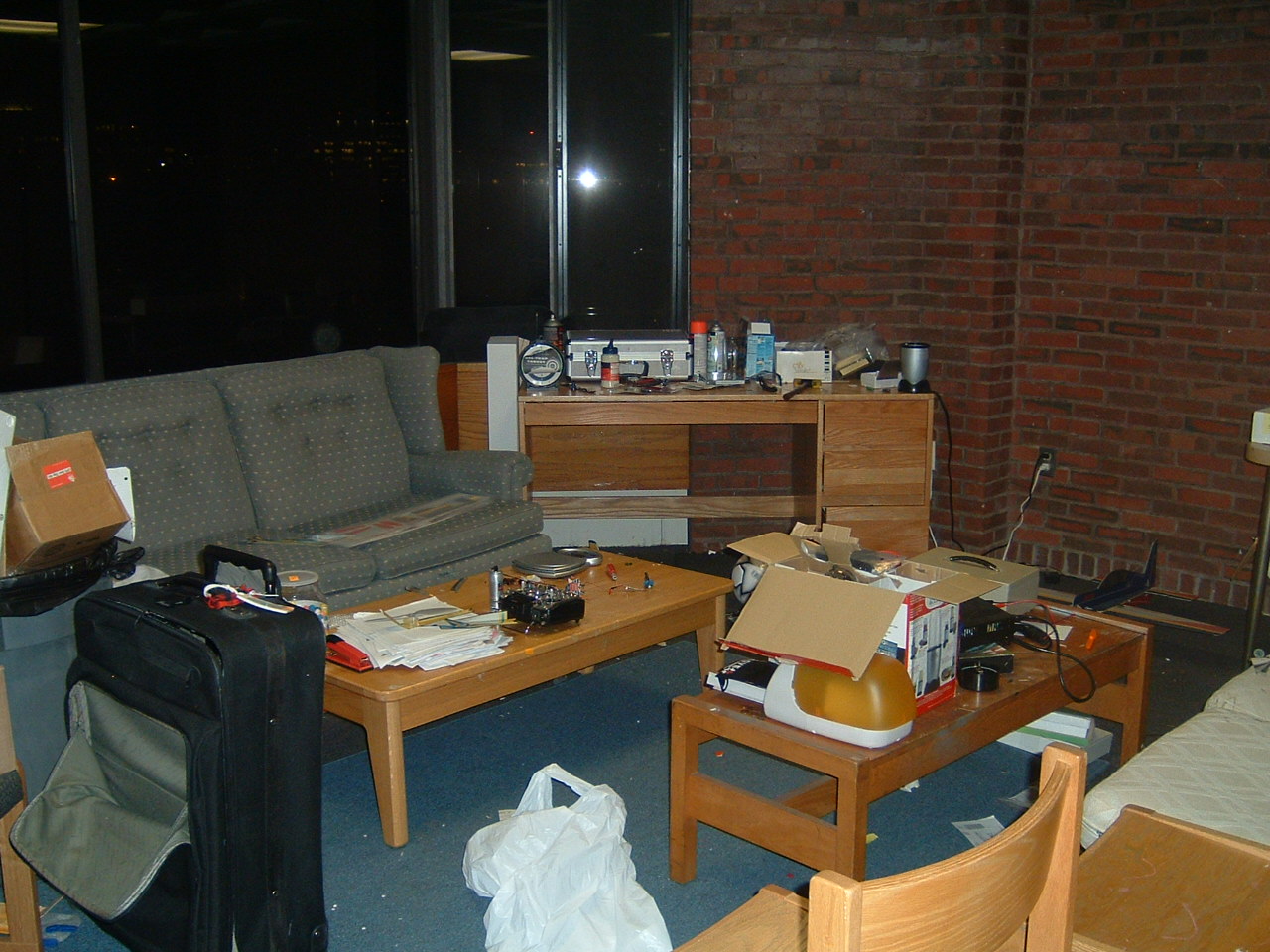 Our suite lounge happens to be a place to store Adam’s planes. 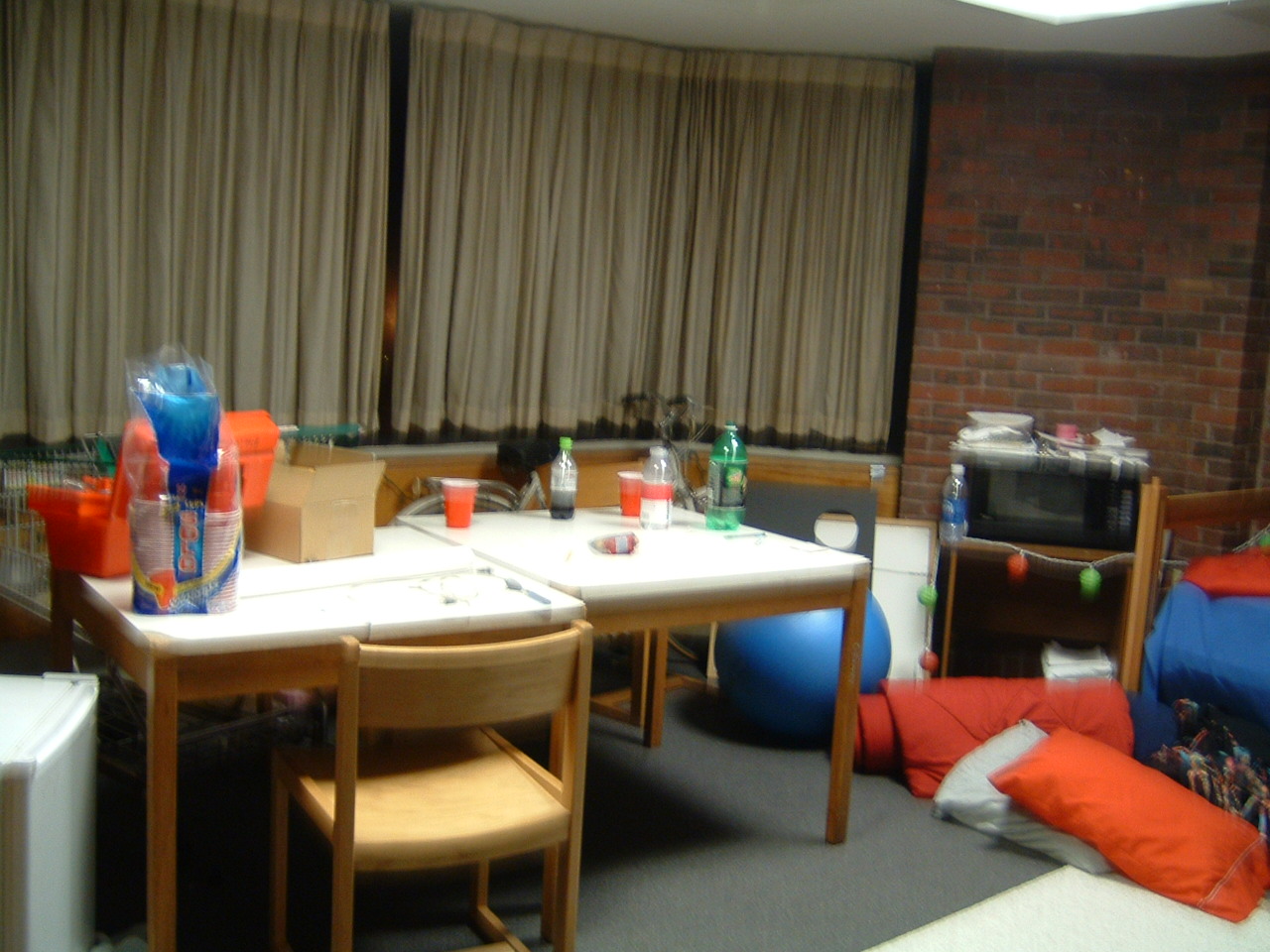 This one, in A Entry, is more a place to eat together and do homework.

Each suite has its own kitchen, and many Macgregor residents cook for themselves at least occasionally. (It’s cheaper and healthier.) 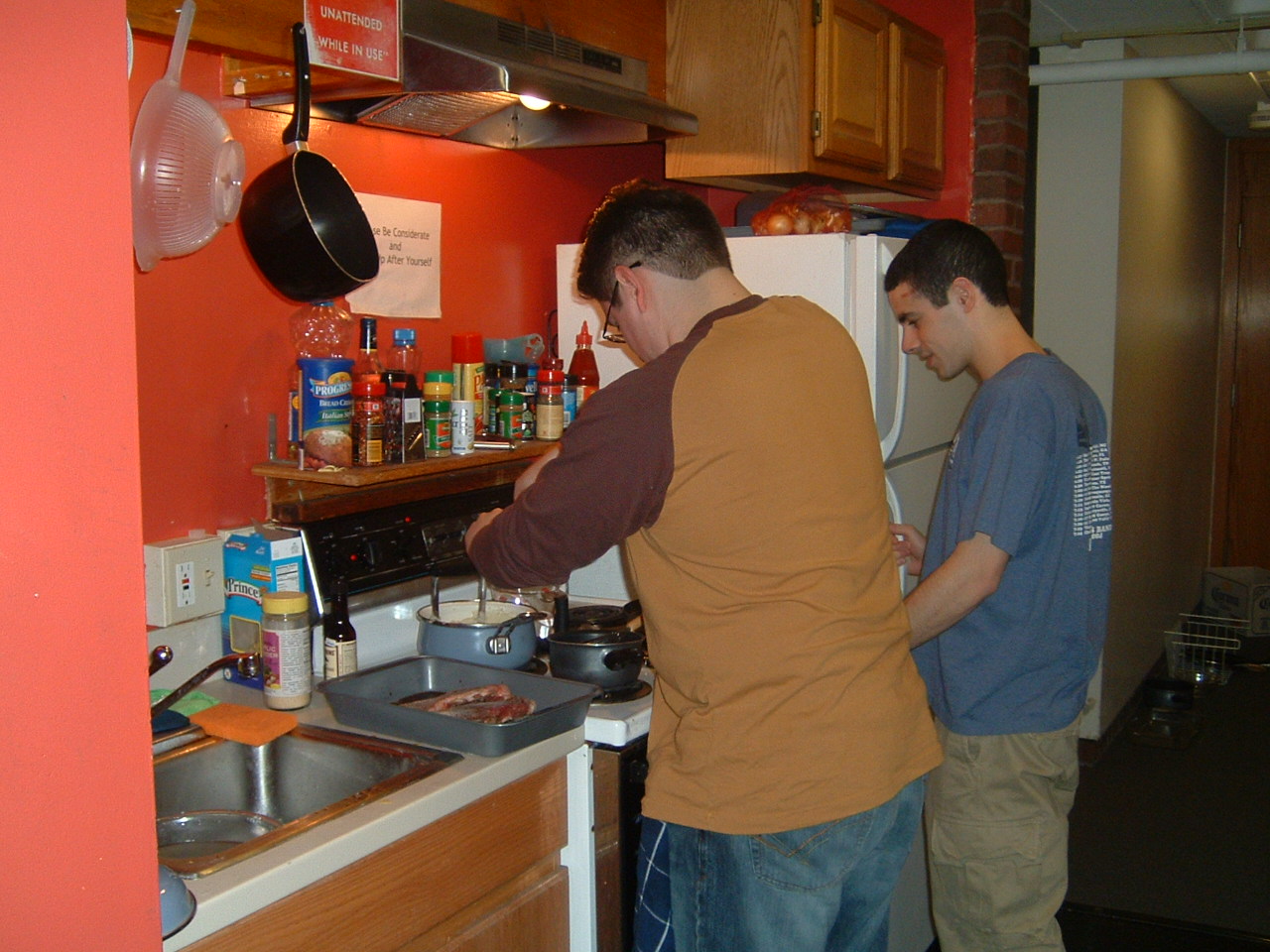 Here Jomar ’06 and Dave ’07 are making mashed potatoes (using my pots, ahem). MacGregor is also in talks to get a dining hall put in (there used to be one in the 80s, but it closed down), but in the meantime, we’re close enough to Next House to go to Next Dining if we have a craving for dining hall food.

Each suite also shares a bathroom, and each bathroom has a shower stall with a small changing area, three sinks, a toilet stall, and a urinal. (MacG used to be all-male back in the day.) 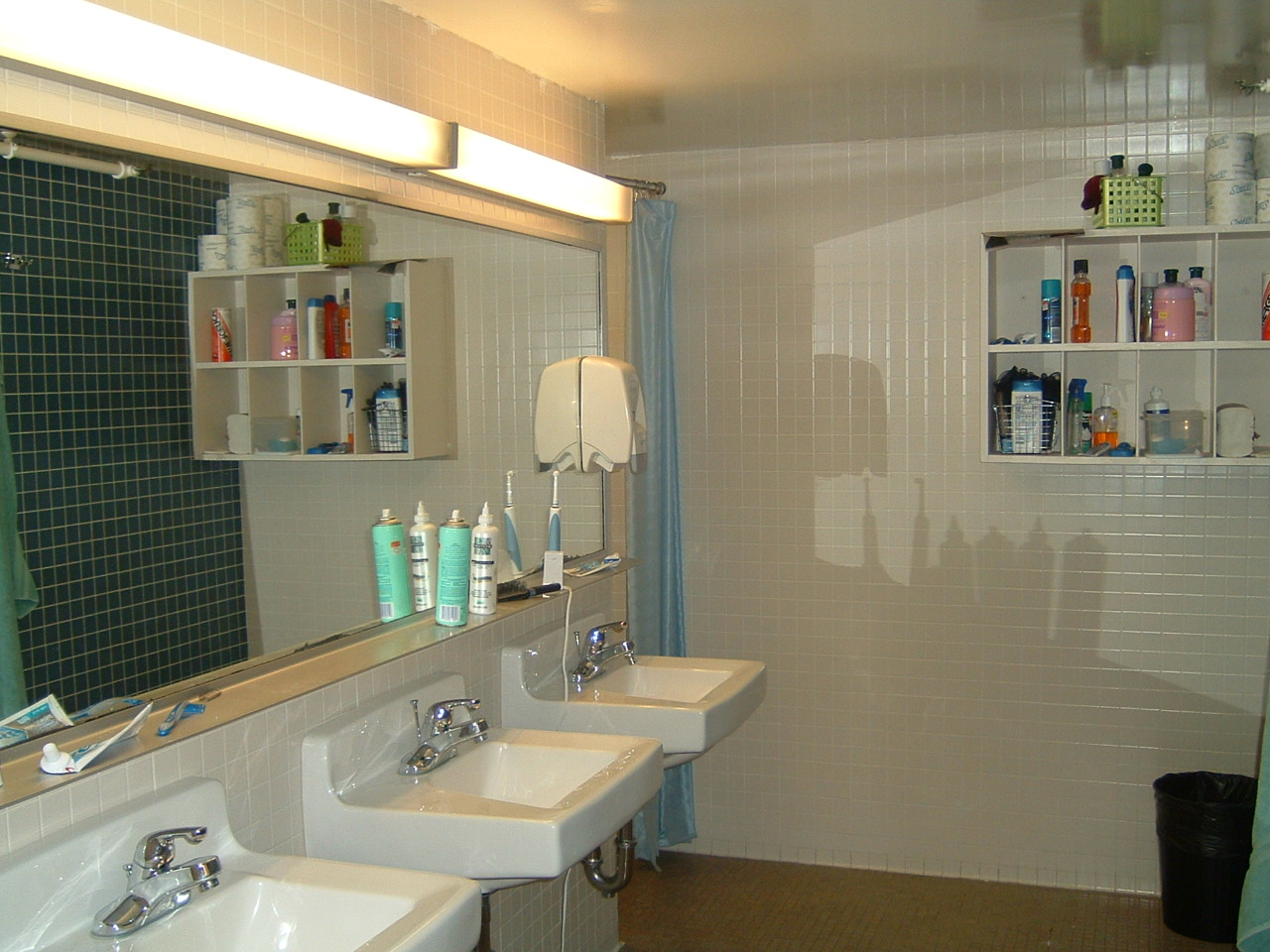 It’s up to each entry how they allocate suites — some entries have primarily single-sex suites (although all the entries are co-ed overall), and some are all co-ed. I’ve always lived in a co-ed suite, and I don’t find anything sketchy about it whatsoever. I mean, you don’t see people naked or anything. But if brushing your teeth next to a guy creeps you out, there are single-sex suites and you can request to live in one. (Note: All MIT dorm bathrooms are cleaned by Housing staff, except the private ones in Simmons.)

Each room has a closet (which you can’t see very well in these pictures because it’s right next to the door). The closet is pretty sizeable, and I can say that because I am a serious clotheshorse. Each room also has a state-of-the-art 1970s radiator. The rooms are not huge, but they’re definitely big enough for one person and his or her stuff, and we mostly use our rooms for sleeping and doing homework; the hallways and lounges are better suited for hanging out and having philosophical arguments until dawn.

If you’re assigned to MacGregor in the final housing lottery, you’ll go through the in-house rush process, in which you’ll go around in a group and visit each entry and meet the residents there. Some entries are quiet, and some are very social, so you’ll want to pick one where you’ll feel at home. Each entry has its own unique personality, and I guess I feel like MacGregor doesn’t have much of a unifying theme to its culture — you end up being really close to the people in your entry, and often you rarely interact with people in other entries, so the entry culture is more indicative of your day-to-day life than the culture of the dorm as a whole.

MacGregor’s i3 video from last year is here. It was made by my friend Seve ’05 (who’s now getting his masters’ in film at USC), and I think it’s a super representation of MacGregor life. Except for the part where I’m in the bathroom not wearing any makeup and look like crap. That part is not accurate.

Stay tuned next time… for some stuff about orientation and about class plans.