Barkowitz and I have decided that today would be a good day to liveblog a Ben Jones info session. Now, we’ve never done a joint liveblog before so be easy on us, but the way this is supposed to work is that we figure we can each only type fast enough to catch half of what he says, so between our two entries you’ll get either ALL of what he says or half of what he says . . .twice. Woo-hoo! Here we go, we’re in 26-100 and Ben is now beginning his pitch.

2:00
He began by asking who was from where, getting a feel for the demographics. There are no international students here so it looks like we get to skip the Intl admissions part of the speech.

He’s now giving a brief history lesson of MIT. In 1861 MIT was founded by William Barton Rogers but it didn’t actually open its doors until 1865. It wasn’t in Cambridge at first, it started right across the river. 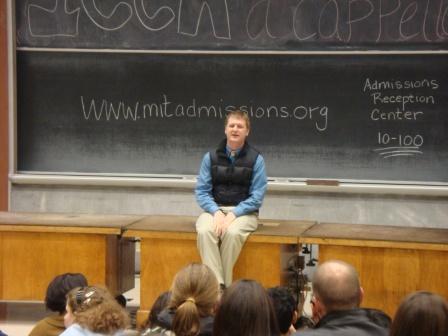 2:06
“MIT is very much a problem solving based approach to education”
“We encourage you to come up with your own procedure to solving problems”

He’s talking about how, for example, in Eric Lander’s Bio class (human genome guy? yeah, that’s him) you will spend the first three minutes learning what would have taken an hour in your AP Bio class and then the next 57 minutes learning stuff that you didn’t even know existed and learning how to actively learn, pursue topics, and be inspired by the education you get.

“Why do you like teaching undergraduates?” Ben asked professors.
“There are two main ways to leave a legacy,” they say, “I could work 24 hours a day coming up with groundbreaking research or I could take some time off from that to touch thousands of people and create the next generation of scientists.”

Humanities!? Look, you can be a great scientist, but unless you can explain your work, you’re pretty much useless to the world. You have to take just as many humanities classes in the humanities as you do in physics/chemistry/math.

You don’t apply to each of these schools, you apply to MIT, that’s all. You aren’t limited to a specific school because it’s important to see what you really are interested in during your freshman year. Yes, that means the “intended major” part of your app is barely considered (so STOP WORRYING ABOUT IT).

What’s IAP? IAP (Independent Activities Period) is the month of January where instead of taking REAL classes, you take awesome classes (completely optional awesome classes) like chocolate tasting, LEGO robots, charm school, and ballroom dancing (there are hundreds of others). IAP is a nice break from academics and a chance to just chill (wouldn’t want a bunch of undergrads going insane would we? No, that’d be bad).

2:18
UROP:
UROPs (Undergraduate Research Opportunities Program) are very popular amongst undergraduates because it allows a chance for young students to get research under their belt and to explore the nitty-gritty of some real topics that they’re interested in. You can start a UROP as a freshman, first semester, by just finding an area you’re interested in and start asking professors. After a quick application process BOOM, UROP. Granted, it’s a bit more complicated, but I’m summarizing because this is a live-blog. As such, on to a different topic, forward ho!

But Ben, I like having a life, if I come to MIT then my life will be boring and suck!
Wrong

MIT has hundreds of clubs and organizations with almost any variety of anything you’d ever want to do. Seriously, everything. Underwater hockey, curling, juggling, it’s all here.

Sports? 41 varsity (most division III, some division I (crew, pistol, fencing)) and many many more intramural. Apparently MIT is a great place to go for water, shooting, ropes, and fencing. That means if you ever want to be a pirate, come to MIT (rumor has it that there is actually a “pirate’s license” that you can earn if you take all the PE classes in these disciplines. Aaargh!).

Hacking is the students reminding the administration that they are smarter than them.

2:29
The rumor is that you need perfect scores to get into MIT.
Wrong

Scores are used in conjunction with many other things (classes taken, academic rigor) to decide whether or not you will be able to do the work here. Take hard classes, do well, and you’ll be in good shape.

He’s now walking through the components of the app (teacher and counselor recs, interview, essays, and all sorts of other exciting stuff).

2:33
Application Component — What is something you do purely for the fun of it?:
They look for a sense of balance, they want to know if you’ll be able to just take a break and do something you enjoy when you get here. If you put something like “I like to go to the nursing home and change diapers” then the admissions office will, um, tilt their heads sideways like a confused puppy and wonder about you.

Application Component — Teacher Recommendation:
Find a teacher that knows you, that you’ve seen outside of class before. Admissions doesn’t want letters explaining the curriculum of BC Calc and why you were awesome at it because that doesn’t help them. They want to know about how you work, they want to know about your learning style and about you as a student, not about how you pwnd math.

2:37
Application Component — Interview:
The interview is an excellent “scale tipper” when two applicants are very well matched. If one person has a glowing interview report and the other has no interview report, the phosphorescent kid will have the upper edge.

Application Component — Extracurriculars:
There’s a reason there aren’t spots for 10 ECs. It’s about quality, not quantity. MIT wants to know about you, not about how much crap you can shove into your day. If 4 or 5 ECs and some room to describe them can oftentimes be more descriptive than listing a bunch of random sports that any one of several hundred other applicants are also listing. What about those sports helped you as a person? Why did you choose to list them?

2:41
Ben just rattled off some admissions stats (all of which are available on this website). Now he’s talking about financial aid, which I’ll leave to Barkowitz to blog while I take a typing break.

2:47
Study Abroad:
MIT has a study abroad office, research abroad, internship abroad, and all sorts of “Get me out of this country” options. There’s a program in Cambridge and Spain that helps MIT students to study there. If you’re interested in Study Abroad, know that there a lot of options, and that you should bug Chris about it because he probably knows much more than I do.

Is it easier to get in as a woman? No, female applicants are much more self-selective while some guys tend to just fling themselves at MIT (I imagine this kind of like “Defend Your Castle” with the castle being MIT and the hordes being the male applicants).

2:57
Class sizes? Freshman classes can be large (lectures upwards of 500 kids) but recitations are much smaller (twenty or less) and that’s where a lot of the learning happens. Don’t worry about class sizes too much, it’s not a big adjustment from high school. Think of lecture as a big talking textbook and the recitations as your typical classroom settings.

2:59
That’s about all I have left to blog. He’s talking about housing now, which isn’t something I’m willing to touch in a liveblog (too much there to talk about, I couldn’t do it justice in a setting like this) and I think everybody is about to be whisked away on tours. If you wait about 15 minutes I’ll get a group shot uploaded, hope you had a good time!