More entries about buildings and food by Sam M. '07

Same as it ever was. I'm still single, but at least I'm in Belgium.

DID YOU KNOW? According to this article, Malaysia recently made it illegal to name children after “animals, insects, fruit, vegetables or colors.” Gwyneth Paltrow, I’m looking in your direction.

Well, I don’t have any big news. But you know what I do have? Pictures of Brussels, Belgium. Because I was in Brussels, Belgium this weekend. if you happen to be in Europe any time during the summer or winter, be sure to check out the Thalys website for “summer offers”–you could get fast connections between Cologne, Brussels, Paris, Amsterdam in first class for the low, low price of 50 € RT, with an included meal and up to three (3) beverages of your choice. As the Thalys promotional booklet puts it, you really do “travel like a lord” in first class.

Wait, actually, I do have some big news–Lance Bass is dating Reichen from The Amazing Race 4!! Really! Well, I was shocked and awed.

I really don’t know what else to write after that, so here are some pictures. 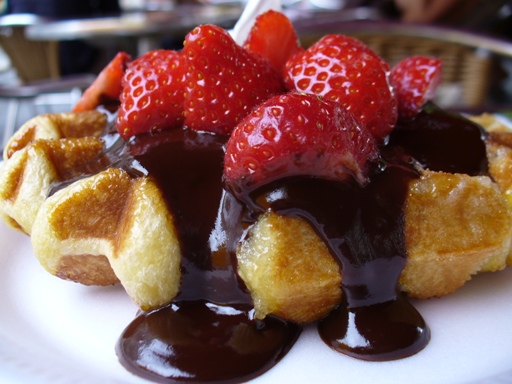 So the first thing we did in Brussels was get some real Belgian waffles, which I used the MACRO function on my digital camera to take some food-pornographic pictures of. And, let me tell you, even though my favorite meal in the world is chicken and waffles, these Belgian waffles were so good that I would say that probably no other waffle I have ever eaten even deserves to be called a waffle. Actually, the waffle shown above is not just a traditional “Belgian” waffle, but actually a “Liège” waffle, with little bits of caramelized sugar on the outside of it. But wherever it’s from, it was probably the best waffle in the world. 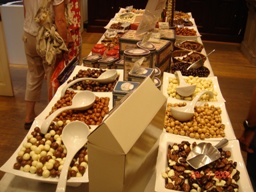 Next, it was time for some real Belgian chocolate, which we spent more time photographing than we did eating. Not that it wasn’t delicious, but just a little more pricey than I am used to for chocolate, growing up 15 miles outside of Hershey, Pennsylvania: The Sweetest Place on Earth. 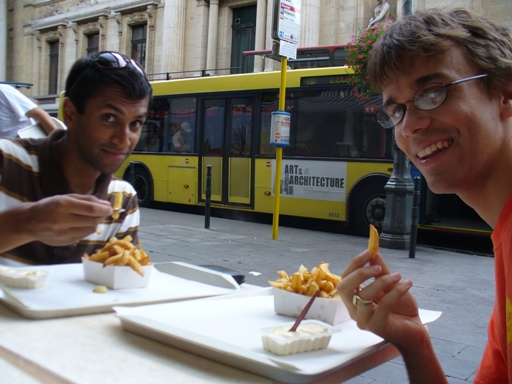 And what would a trip to Belgium be without some pommes frites? As we all learned in January, French fries were (probably) actually invented in Belgium. As I explained to the wonderfully-named Pascal a few weeks ago, they are called French fries in America because “French” refers to the method of cutting the potatoes–not because Americans are stupid and think that Belgium and France are the same country.

Anyway, the fries were about as good as the ones at Pommes Frites in New York, but a little bit cheaper. If you’re in New York, I definitely recommend checking out that little shop and getting some pesto mayonnaise on the side. 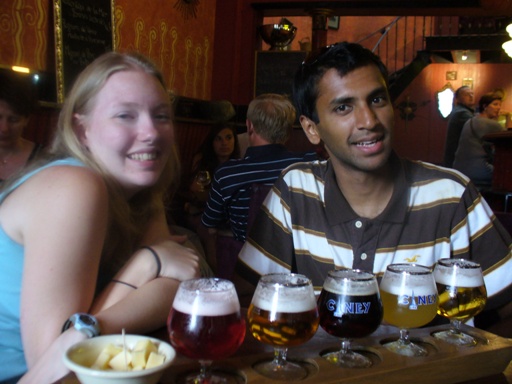 In this photograph, 21-year-old Kendall ’07 and 23-year-old Kunal (my summer roommate from Bombay) enjoy a sampler of Belgian beers at one of the many bars around the Grote Markt. Thus, in our two days in Belgium, we managed to hit four of the five pillars of Belgian culinary fame. The fifth pillar is “mussels from Brussels” which are way too expensive for college students and also make me puke. 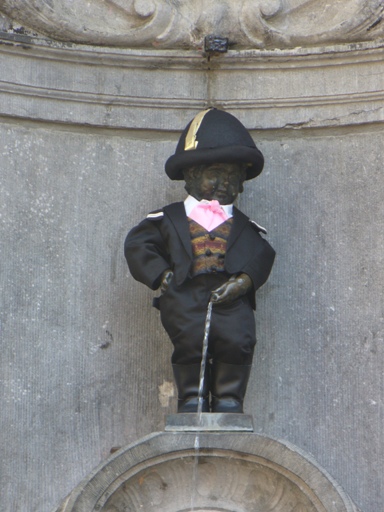 The enduring symbol of Brussels is the 18-inch tall Mannekin-Pis. So, not quite the Statue of Liberty or La Sagrada Familia, but maybe appropriate for such a small, laid-back, and enchanting European capital. Legend has it that the fountain was constructed over 500 years ago when a nobleman discovered his lost son in the woods after two days of searching. The son was performing this most vital of bodily functions when he was found, and probably got beat up at school a lot after his father made this statue in his image.

Another legend, which I like better, probably because I am male, involves the young boy using his quick wits to extinguish a bomb set to blow up the town hall of Brussels.

They sell souvenirs where the stream of water is replaced by a corkscrew for opening wine bottles. I seriously contemplated buying one, but it was a little creepy even for my taste.

Also, I should mention that the little dude is usually naked, but was for some reason dressed as Napoleon for our visit. They have a museum in which they store over 500 tiny little pairs of clothes made for him, the most popular of which is always the shiny white Elvis suit. I’m thinking this should be a challenge on next year’s Project Runway, since they’ve apparently done dog clothing this season. 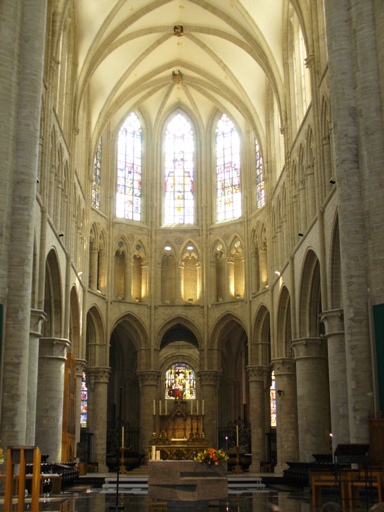 We also went to the cathedral of Brussels, which was absolutely beautiful! Having toured all these European cities, it’s kind of risky to go to an art museum or cathedral, because it might be exactly like the art museum or cathedral in every other European city. But I liked the architecture in Brussels even better than the Kölner Dom, although it doesn’t have quite the same immense majesty. What it does have, however, is an excavation site in its basement featuring the remnants of a Romanesque cathedral originally built under it! They built it on top of another cathedral! It was more exciting when we were there. 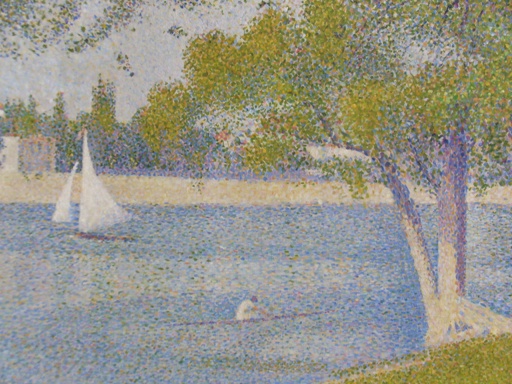 The fine art museum, however, left something to be desired–although the 19th and 20th century art exhibits were great, well-arranged and well-lit, the 17th and 18th centuries were closed for renovation, and the 15th and 16th centuries were not very impressive and set up in a crowded, dark attic. This picture is more of a demonstration of my photographic prowess than an endorsement of the museum.

That’s all. If you live in the American northeast, be sure to stay hydrated in the midst of this record-breaking heat wave.