not to groan at my poor usage of outdated memes. ALSO, CPW!

I assume that the bulk of our audience right now is students who are thinking about joining the class of 2015, and/or those admitted who don’t mind the expense of traveling to boston for the weekend in exchange for free food. Which is totally an okay thing to do, by the way. When Olin College of Engineering asked me if I wanted to attend their candidates’ weekend, an event similar to CPW with the major difference that the attendees have not been and will not all be admitted (in my mind, I viewed it as elimination round 2, and was hoping for Survivor-esque challenges during the weekend), I gave them an answer that somewhat sealed my fate. They were running out of space for Candidate’s Weekend, and so basically asked me “would you like to be considered for a spot, or have you made a decision to go elsewhere?” I had been accepted to MIT about three weeks prior, and my decision was only between MIT and Olin; I asked my friends at Olin about Candidates’ Weekend and sent the administrative d00d something along the lines of the following:

* I do not think this sentence, or anything resembling it, was in my actual e-mail; however, it was on the tip of my tongue at the time.

That was an absolutely stupid thing of me to do, but I guess it reflects the state of my mind at that point in my senior year; I believed I was torn between Olin and MIT, but subconsciously had selected MIT from the moment of my acceptance. Fortunately, they saw that I wasn’t a good fit for Olin / probably not going to go, and gave the spot to someone else; I was that much sadder for my lack of awesome t-shirts.

Still looking for a good reason to be excited SCRATCH THAT I MEAN ABSOLUTELY PUMPED about CPW?

For reasons that make me no less of a manly man, I happened to have two stuffed animals on my bed, conveniently placed in the following arrangement; working at my desk one afternoon, I turned around to observe the following. I present to you: 9000 reasons to come to CPW! 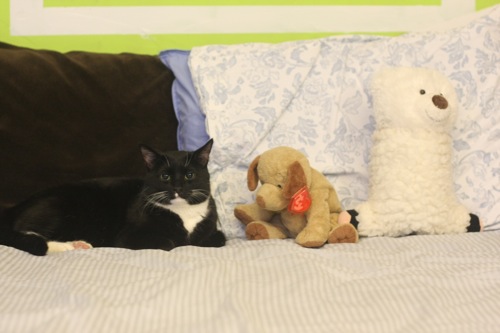 Yes, once again, I am schmoozing you (and incorrectly using that word; please don’t send Chris Hansen and an NBC camera crew after me) with pictures of Vincent’s cat. I still don’t know its name; I still call it ‘cat’.

By the following metrics, this picture is 9000 reasons to come to CPW:

In Internet Currency, this is 9000 reasons! Combined with the other reasons given in this post (which you most definitely read, rather than choosing to skip down immediately to the picture of fuzzy cuteness, right?), that makes for Over 9000 Reasons — the Cardinal Intraweb Number — to be wanting-to-be-at-CPW.

SO WHY AREN’T YOU HERE YET?

See you this weekend!