Illustrated with tons of images and a video, and not *as* many words

Fun fact number 1: I’m a drummer. You probably knew that, but you most definitely didn’t have a gratuitously-added picture – in which I pretend to twirl a drum stick – to prove it. So let me fix that: 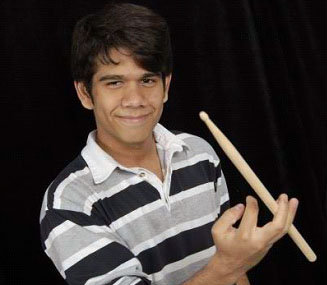 Because Elizabeth ’13 has a good point: we all need some way to show you we’re not robots.Fun fact number 2: I’m an actor, albeit one with an incredibly short, not-so-involved career. I got my start in the second half of senior year, when my high school staged its production of Guys and Dolls (this will be moderately important later).

But let’s get to the heart of the matter. Let’s say you’re a student who’s interested in MIT, and you want to continue doing artistic things – be it performing, singing, acting, dancing, even going to open mic sessions and symphony hall performances – if you end up going here.

Your biggest concern is that MIT, which doesn’t stand for Music and Incredible Theatre, is going to leave you no opportunity to pursue the arts any further. Sure, the admissions website has a whole spiel dedicated to the arts at MIT, but you know that spiels are spiels, not actual testimonies.

What’s worse, maybe the facilities provided for the arts are in bad shape, and maybe the clubs to which MIT refers have only a nominal presence. It’d be sort of like, I don’t know, being a drummer, and going to a music room somewhere and expecting to find a drum set that someone told you about, only to find it’s actually an electric drum set for which there is no power supply.* You’d be justifiably (not to mention, in this purely hypothetical scenario, quite) disappointed.

Since I haven’t yet carved out a good niche for my artistic inclinations to speak from personal experience, I’ll be drawing the following from a few events that I’ve attended. (I’m splurging on the pictures and video, since my last two posts had absolutely no media in them.)

If you’re the type of person who knows of Brahms, Bach, Vivaldi, or Mozart, meet your new best friend: the BSO College Card. 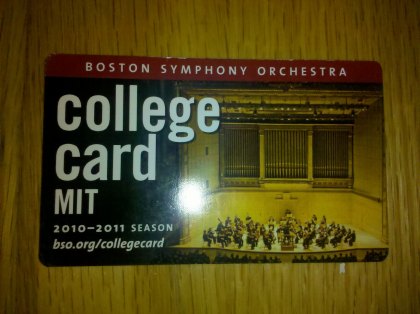 These things exist!Thanks to MIT’s elaborate, completely fictional ruse to have its students get some culture, the College Card is free with your MIT ID. Once you have it, if the Boston Symphony Orchestra is set to perform on a particular week, you can drop by at the beginning of that week and pick up one free ticket to a concert. Unfortunately, these tickets are only available on a first-come, first-served basis, and particular performances may be blacked out.

Given that these tickets are free, you might think the BSO gives students shoddy seats. Not so, jaded reader; my friend and I scored some serious nosebleed seats when we saw Manuel de Falla’s Atlàntida being performed. 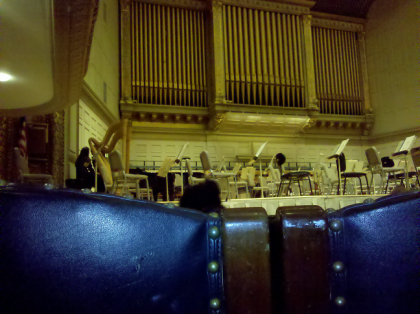 Good thing your nose can’t actually be bloodied from sitting that far up front.But let’s say your thriftiness prevents you from taking public transportation all the way to Symphony Hall, and, like me, you’re too lazy to walk or bike on down. That’s why MIT has the Kresge Auditorium, a popular venue for MITSO, MIT’s own symphony orchestra. 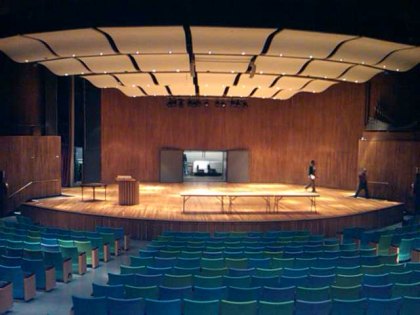 Conveniently, Kresge also has a stage on the lower level, the Kresge Little Theater. 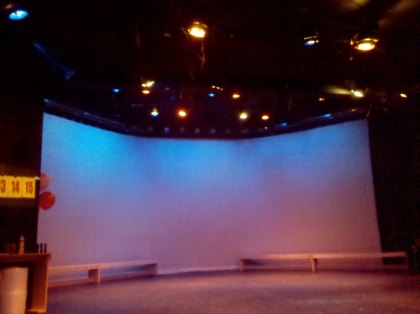 You can’t accuse MIT of false advertisement.Kresge’s smaller venue was where I saw Too Much Light Makes The Baby Go Blind, a dynamic collection of 30 two-minute plays. MIT’s Dramashop went to great lengths to preserve the eccentricity of the show, incorporating many elements of the Neo-Futurists’s avant-garde style.

Some of that includes small details: rolling a six-sided die to determine how much you’ll pay for the show; being notified that any confiscated items of yours will be returned at the end of the show; getting free pizza if the show is sold out, as my showing was; and forcing the entire cast to stay alert, as different members may need to replicate the two minute play that was just performed. But none of that holds a candle to the cast’s level of interaction with the audience and the utter disregard for the fourth wall.

Let’s just say that I was literally yanked from the audience and covered in bubble wrap. (I’d show some photos and/or video of this, but unfortunately, copyright agreements forbade the use of any cameras during these performances…)

If you’re in the mood for musicals, MIT has those. MIT’s Musical Theater Guild put on a performance of Guys and Dolls, presumably because MIT felt like reminding me of my senior year in high school. They made good use of their limited space in the Student Center, and the entire show was well-choreographed. Incredibly, the entire show, as is the case with the MTG itself, was also student-run.

So basically, they had a huge role in constructing this set. Think about that: 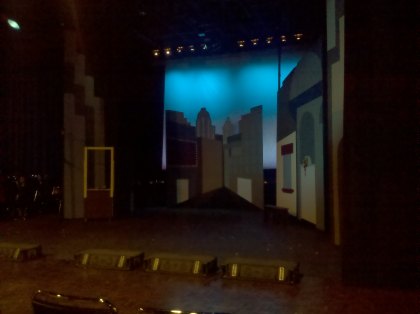 If it weren’t for my urge to make up for lots of copyright agreements, I wouldn’t have used nearly this many pictures in this post.Finally, MIT hosted Ring the Alarm, a hip-hop dance show that brought together established dance groups and young dancers from local area colleges. Teams from Suffolk University, Wellesley College, Boston University, and MIT came on down to perform, with some seeking the top prize, and with others simply out to present their moves.

Thankfully, several people from MIT actually know how to dance, which may or may not be what you expected. Here’s a video of three MIT dance groups: Ridonkulous (who took 2nd place in the competition), Fixation, and Mocha Moves. (Also at the beginning is another dance troupe, Weapons of Mass, which consists of three MIT alum, but otherwise has no affiliation with MIT. So whoops. Ignore my false subtitling.)

Not only was the competition itself a big success, it also raised money and awareness to help the fight against Sanfilippo syndrome.

To give you an idea of how artistically involved MIT can be, those last three things that I listed (TMLMTBGB, Guys and Dolls, and Ring the Alarm) happened in the same weekend. As it is with seemingly anything at this school, doing what you love – and making something of it – is just a matter of carving out a niche. Try not to work too hard at doing all the work yourself, though, as the odds are good that someone, at least in part, shares that very same passion and the desire to build upon it.

* = That means you, Macgregor house >:- But it’s kind of cool…you still have Macgregor Convenience.

3 responses to “Moves and Music(als)”