Moving On, Moving Out, and the Conservation of Freshmen by Paul B. '11

Reflections of a (kinda) sophomore.

As of noon today, I am officially done with my first year at MIT. I turned in my last final, walked out of the exam room into the bright Boston sunshine – and that was it. Part of me is still wondering when my next problem set is due and why I’m not stressing out about it. The other part of me keeps on asking, “Okay, so you finished one year, congratulations…but what now?”

What now, indeed. As I mentioned before, this Saturday I’m heading home to South Bend for a week to recover and recharge before starting my summer UROP. Family, friends, my “real” bed…yes, even though MIT feels like home, I’m definitely looking forward to going back.

Before I take off on Saturday, though, I have to deal with what I think has to be the least glamorous and least enjoyable part of the overall college experience: packing. I view packing as one of life’s necessary evils: it can be tedious and time-consuming, but you’ve gotta do it. And in the long run, I know it’s not only necessary but definitely worth it, since I’m finally moving into my fraternity’s house in Boston. Of course, I’ve had a great time in Simmons this past year (and there are more than a few Greek guys who choose to live in the dorms – like Alan ’09, who lives down the hall from me), but I’m really excited to try living somewhere new this summer. Besides, it’s Boston.

That being said, the actual process packing still makes me sad inside. Right now, I’m sorting all the detritus I’ve accumulated in my room over the past year into three basic piles : Bring Home, Keep, and Junk. (If it helps, you can think of the piles as the fundamental solutions of the system of my room. Or I could stop trying to make jokes about 18.03.)

Basically, everything in the Bring Home pile will eventually end up in one of my big red suitcases (clothes, toiletries, super-secret gift for my parents and sisters) or my backpack (laptop, Starship Troopers, iPod), with a little space leftover in case I want to bring anything back from South Bend. Everything in the Keep pile, meanwhile, is destined for – surprise! – a box of some sort. I’ll be leaving most of these boxes (old textbooks, the majority of my personal book collection) in storage over the summer, but of course some (more clothes, my poker chips, some books I’ve been meaning to read) will eventually be unpacked as I get settled into my summer room in Skullhouse.

As for Junk? Well, most of it is headed for the trash can. I don’t really want to bore you with the details of things I throw away, except that – due to my extreme packrat nature, which I’m trying to fight – it’s a lot. ;) Some things, though, I’ll be donating to StuffFest. What’s StuffFest? Well, here’s a picture of StuffFest going on in Simmons: 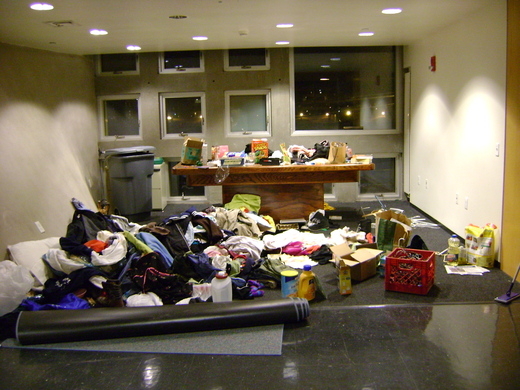 Basically, StuffFest consists of students putting all the old stuff they no longer want – clothes, books, food, and so on – in some central location in the dorm. For about a week, the pile is a free-for-all; any student can take anything they want from it, for free. After everyone’s moved out of the dorms (or into their summer dorm assignments, same difference), a few volunteers from each dorm sort and bag all the leftover “stuff” so it can be donated to charity. In addition to the student volunteers I mentioned, StuffFest is organized by MIT SAVE (Share A Vital Earth), one of the many student groups on campus, with additional support from the Environment, Health, and Safety Office. I’m not a member of SAVE or anything, but I really like how StuffFest takes advantage of the end-of-term rush to achieve a genuinely positive result for the community, so I felt it was definitely worth blogging.

Before I get back to packing, I have two last last tidbits. First off, Neil Gaiman is coming to MIT Friday! I’ve loved Neil’s work ever since a friend recommended Neverwhere to me back in high school – it’s still a toss-up as to whether I like that novel or American Gods more – and I’m incredibly excited to actually meet him in person. Keep an eye out for pictures!)

Finally, according to the upperclassmen, even though I’m finished with my finals for freshman year, I’m not actually a sophomore. Apparently, MIT observes a principle known as the Conservation of Freshmen, which basically states that “there must always be frosh.” Accordingly, although sophomores become juniors and juniors become seniors immediately upon completing their finals, the freshmen are stuck as freshmen until the next class comes on campus for Orientation. So apparently, there just aren’t sophomores between June and August.

Seriously, I couldn’t make this stuff up if I tried.

16 responses to “Moving On, Moving Out, and the Conservation of Freshmen”