My brother is cooler than me by Elizabeth C. '13

The plight of the less-cool older sibling.

A couple weekends ago, the average age on campus suspiciously increased, while “real” adults donning excessive amounts of MIT apparel flooded the Student Center and Infinite. I’d almost forgotten what a pre-teen looked like until I saw them navigating the cooridors and poking around lecture halls with those said real adults. It could only mean one thing… it was Family Weekend!

… which also meant that the average hilarity level of Cambridge, MA increased with the arrival of my 10-year-old little brother, Ryan (who insists on being called a pre-teen).

There are very few things that you need to know about Ryan, and those things are:

You may even recognize The Goober from his appearances in some of my videos. The folks on campus certainly did, as upwards of six people (parents and students) recognized Ry on campus, and I wasn’t even with him. “Guess what, Elizabeth! Someone recognized me from the blogs again!” Do you know how many times I got recognized during that weekend? Zero. Once again, my brother owns me… at my own job.

So here are some pictures from that weekend so more of you guys can recognize him the next time he visits me and he can ham it up even more: 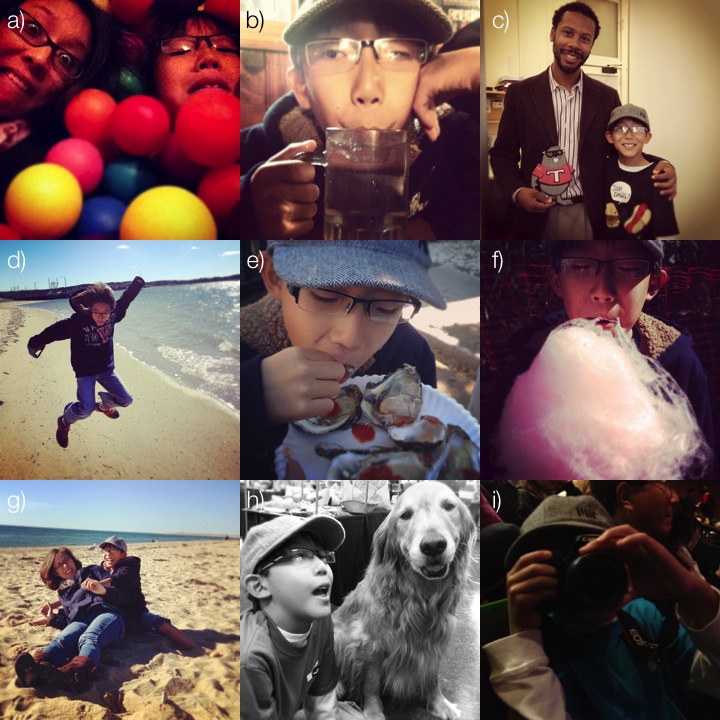 b) Ry and Dad are fans of Diners, Drive-Ins, and Dives (which is one of the few things we disagree on – I personally can’t stand Guy Fieri), so they (read: Dad) begged to have lunch at Mr. Bartley’s Burgers in Harvard Square, which was recently featured on the show. (I seemingly-begrudingly obliged, but secretly rejoiced at the opportunity for a burger. Mr. Bartley’s are awesome. Also, their sweet potatoes. Also, now I am really hungry.) I call this photo, Little boy retires to local tavern after long morning of first-world problems.

c) Ry is a huge fan of Quinton McArthur – he wasn’t able to meet him last year, so this encounter pretty much made the kid’s life. Here is Uncle Q, Tim, and Ry.

d) My family’s experts at the whole Family Weekend shpiel, so the past couple years we’ve shipped up (or is it down? I still haven’t gotten used to New England geography…) to Cape Cod. We drove to Wellfleet for the Oyster Festival, during which…

f) …He soon found something else at the fest that he found more palatable.

h) …So then we drove back to Sandwich. Last year we ended up stopping at the Snow Goose Gift Shop to ask for directions, but ended up talking to the shop owner for a while, who incidentally happens to be one of the nicest people on the planet and also incidentally happens to own the nicest and most photogenic Golden Retriever on the planet. We had to stop by the shop to see if Donna and Donald were still there, and not only were they there, but she remembered us. If you’re ever in the cape area, stop by this store. Good people/dogs.

i) We booked it back to campus to catch the annual Family Weekend a capella show, where Ry showed off his best Asian-Tourist-At-MIT impersonation (except it wasn’t an impersonation, it was real life).

Until graduation, MIT will have to wait for the return of The Goob.