It was quite an experience

This past Monday, I found out that I passed my national EMT exam.  I was so happy – now I am officially a nationally certified firefighter and EMT!  Little did I know, my new skills as an EMT were going to be quickly tested.

It started about 1am that night.  I had been getting in and out of bed and walking around, trying to force myself to fall asleep.  I have been having a lot of problems with sleeping lately, where it takes hours for me to fall asleep and it is really hard to stay asleep.

At 1am, there was a knock at my door.  I am a Medlink in East Campus, and I believe very strongly that if people are sick on hall, they should feel comfortable coming and knocking on my door.  Many of us Medlinks in East Campus feel this way.

That was what the knocking was about.  I asked who it was, and the girl at my door told me that she did not feel right.  I opened the door and let her in.  She sat on my floor, and I sat with her.  She said that she was having trouble sleeping, and felt really awful. A stabbing feeling in her stomach. I palpated her abdomen, like a fancy EMT, and it was fine other than the pain.  But it was the worst pain she had felt, unlike any other.  I helped her to her room.  I got a bowl from the kitchen and put a bag inside in case she felt like throwing up, and then got her a glass of water and some paper towels.

On the way back to my room, I got called over by a friend down the hall.  He told me that he had just thrown up for the second time in two hours and felt awful.  This is when I realized that we might have an epidemic.  I went back to my room, scrubbed my hands clean with soap and water, and put on gloves.  I grabbed a bag, paper towels, some thermometers, and a cup of water.  I brought it back to the second patient, as he started vomiting into his trash can.  He told me to leave.

At about 2:30am, I went back to bed.  There was not much more I could do, and I set my alarm for an hour later so I could check on the two patients again.  At about 3:15am, after trying to go to sleep for 45 minutes, there was another knock at my door.

It was the boyfriend of patient 3.  He told me that she wasn’t feeling well, and I knew exactly what it was.  I got out of bed, climbed down my loft, grabbed a bag, some paper towels, and followed him down the hall to her room.  There she was, extremely pale and feeling extremely sick.  I left her in the care of her boyfriend, and went down the hall to check on the others.

Patient 2 was passed out.  I refilled his water, left him a new bag, checked his breathing rate, and let him sleep.

I considered calling the ambulance. I woke up the other EMT on hall to ask her what to do.  She told me what she thought, and I let her sleep.

Patient 1 was in a much worse state than before.  I got to her room just as she started vomiting, and I helped her make her way to the bathroom, bringing paper towels and helping her feel comfortable.  Afterwards, she felt a lot better. I cleaned up the bowl, and I put in a new bag. I helped her back to her room, where she curled up, still in pain. I encouraged tiny sips of water about every fifteen minutes afterwards. I told her that I thought she should go to the hospital, and she told me that she did not want to.  Nobody wanted to.

I went back to my room. I scrubbed my hands red.  I went into bed.  I sent texts to the ill, telling them to text me if they need me.  I got a text from my boyfriend, telling me that he just threw up and was feeling really awful.

I got out of bed. I went down the stairs, Lysol in hand. I made sure he was okay – I brought him a bag, paper towels, water.  I let him sleep. I went back upstairs, spraying everything with Lysol – the door knobs, the railing.

It was almost 5am.  I sent an e-mail to hall, but only to the residents as to not freak out the rest of the building.

There’s a really bad stomach flu going around right now. Let me know if you are feeling ill, I will try to be around. Try to stay hydrated if you can, and go to medical if you start feeling sick. Mob leaving at 7am after I give them a call.

Stay healthy (and away from other human beings)

I got three immediate messages of new sick people. I went and checked on them – I brought them bags, paper towels, water.  I lysoled their doors, their sinks, their light switches. I scrubbed my hands red.  I e-mailed the GRT’s, warning them.  I e-mailed all the East Campus Medlinks, asking for help with getting Gatorade and Saltines and taking care of my residents – telling them to keep their residents away, in case this is as incredibly infectious as it seems.

At 7am, I called MIT Medical Urgent Care.  I spoke to the triage nurse, and she told me what to do. I sent an e-mail to East Campus residents.

I am sending a warning about a sudden-onset stomach flu that is currently floating around the east parallel.

MIT urgent care recommends that students who present symptoms of nausea, diarrhea or vomiting rest and try to sip clear fluids such as water, ginger ale, gatorade or broth.

Please go to urgent care if you have the following:
– Vomiting/diarrhea that persists for many hours
– Inability to keep fluids down
– You have a fever or feel lightheaded when standing up

If you are sick, please contact S^3 to get help with managing missed classes. They are going to encourage you to go to MIT Medical, but you do not need to go unless you have one of the symptoms above.

The response was worried residents.  I told them to wash their hands, and stay in if they felt sick.  Stay away from my floor – we are quarantined for Tuesday and the foreseeable future.

At this point, there were about 10 sick people on my hall.  The not-sick quickly responded – there were trips to the super market organized.  Polls were sent and taken to try and figure out where this disease came from, and how many were infected. The virus had been found to present symptoms in at least two alum, infecting outside households.  I Lysoled the doorknobs, my boyfriend, the cats.

A friend of the hall and former resident made us a huge pot of chicken soup, as well as a smaller pot of vegetarian soup.  People brought us Gatorade and Saltine crackers. Other Medlinks came and brought me thermometers. I went to Urgent Care to update the triage nurse – she told me to continue what I was doing.  Check the pulse rates and the temperatures.

My floor turned into an emergency room.  I went around leaving thermometers in people’s faces, pouring Gatorade powder here and there.  I missed all my classes.  I started to feel sort of funny, but told myself that there were more sick people and made it go away.  The count was over 15 sick people. I ran up and down the hall over and over again checking on people, until I was forced into my room and to bed and told to calm down and go to sleep.

I scrubbed my hands red, showered, and took a two-hour nap.  I woke up, and I checked on my patients.

People were starting to feel better.  It was the late afternoon, and I could see noticeable changes in mood, skin color, and overall feeling of the first patients.  They could keep down fluids and even some food, and things were looking up.

I finished a problem set.  I tried and failed at studying for my exam on Friday.  I still felt a little funny, but chose to ignore it and, after putting a hosed, but healthy, senior on night duty and putting a sign on my door that I was not on shift, I scrubbed my hands red and went to sleep.

Eight hours later, I woke up for class.  I went up and down the hall, checking on the patients.  There were four new patients over night.  I made sure they had Gatorade and were comfortable, and I went off to class.

I went through the day in a daze, unable to focus on anything at all.  Worrying – just worrying.  I felt off – and I thought that I was doomed to come down with the virus.  I sent more warning e-mails to the Medlinks – the disease spread slightly to a couple people in the other parallel, but otherwise seemed to be winding down.

I got a nice e-mail of thanks from the Medlinks director.  I made an appointment with student support services for the next day.  I freaked out over a problem set that I thought was due that day. It was due the next day, Thursday.

I did the problem set.  I felt off.  I did a case study for marketing. I tried and failed to study for my test on Friday. This is not my week.

I went to sleep.  There were no knocks on my door, no frightening texts or calls in the middle of the night.

I woke up, I went to class. I met with my awesome student support services officer.  I got an extension on my test. I went through the rest of my day in a daze, and I identified the source of my haziness to a new medication I was trying out.  I stopped taking it.  Things are clearer now.

One new patient, patient number 20.  It has been over 24 hours since a new person has presented symptoms.  I hope this is over.

I learned a few things over the past five days.  First of all, I really like being an EMT and Medlink.  Even though it was torturous at times, I really did like being there for my friends, and I think it is important that people have someone to go to when they are not feeling well.  I know that if I was sick I would want somebody checking on me, and I am glad that I can be there for other people.

Second, my community is really awesome.  My hall really came together in the rough times – making soup, bringing Gatorade and crackers to the doors of the ill.  It is amazing how generous and kind these people are, and I am so happy I live here.

All along, the cats provided great emotional support, and probably helped with the spreading of disease. 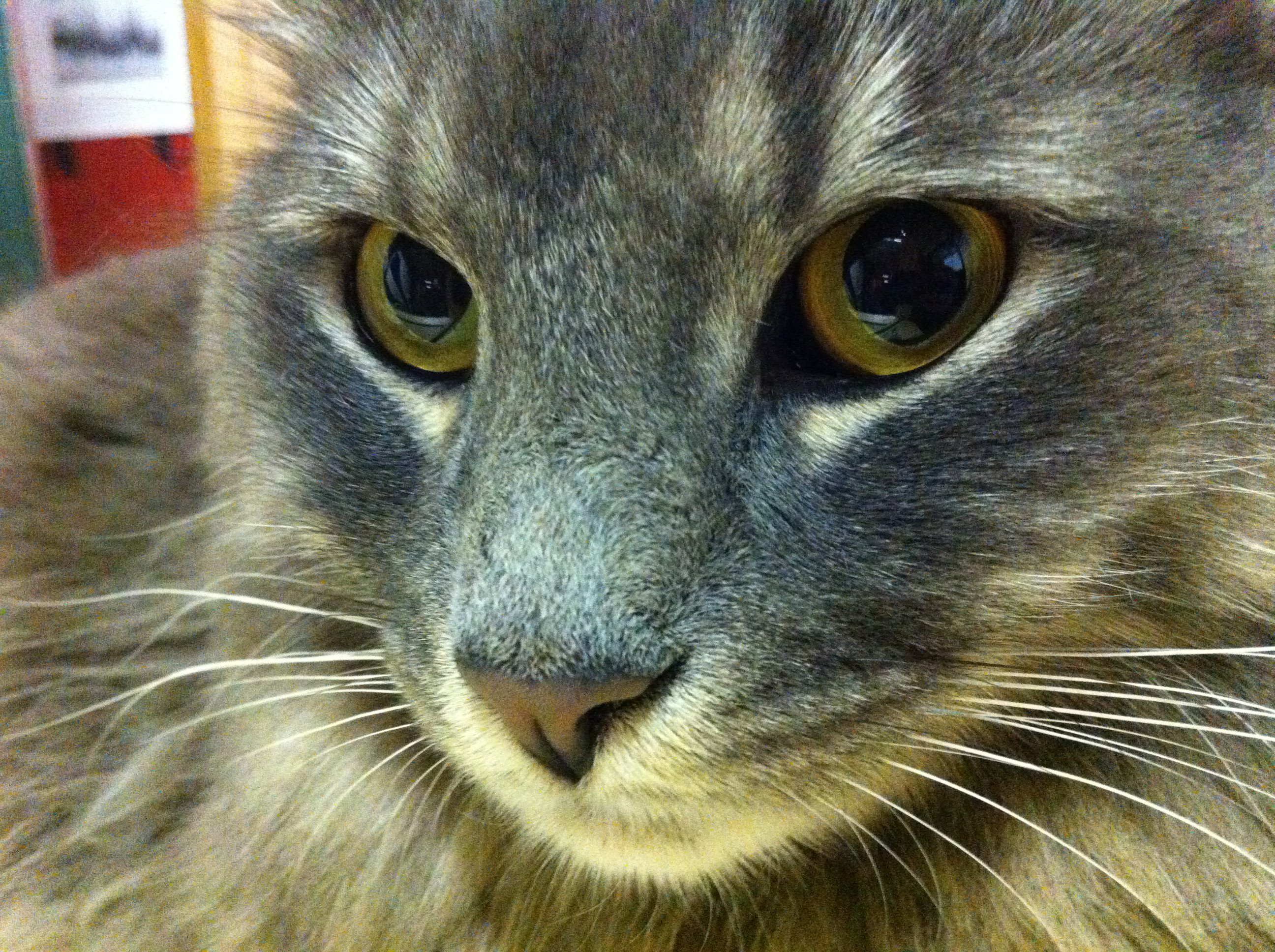