You're in your room doing a pset. I'm in my lab making science happen.

This guy tried to guilt-trip me into writing a blog, but yeah, I haven’t written a blog in too long anyways, so I owe all of you one. :p

Truth is, I have not been doing much this semester other than being in lab. You see, I am taking Project Lab, this 30-unit class (normal classes are 12 units at MIT), and I have been spending well over 30 hours every week in my lab, looking at worms, running gels and blots, and checking out the most beautiful girl in the lab (see below).

My research deals with the characterization of a novel gene in the aging pathway of the nematode Caenorhabditis elegans (a roundworm that is only 1 mm in length as an adult – so NO, these are not earthworms! i can no longer count how many people have asked me that). C. elegans is known as a model organism, because since its characterization by Brenner in the 70s, we have come to understand much of its genetics well and see how it applies cross-species to higher order organisms. You might not know this (kudos to you if you know what this is as a high schooler!), but RNAi, for example, was first fully characterized in C. elegans, and resulted in the 2006 Nobel Prize in Medicine. This is more commonly known – but apoptosis was also one of the biggest discoveries made using C. elegans, and Professor Horvitz of MIT won the 2002 Nobel Prize in Medicine for that discovery (every once in awhile I will see Professor Horvitz at joint lab meetings!). Two Nobel Prizes in five years for a microscopic worm – not bad eh?

Not to get into the science too much here, but the basic idea of worm research is because we know that there are so many different genes conserved between mammals and C. elegans, we can use the worm as a model to see what these genes actually do by knocking them out in the worm and observing the resulting phenotype. In very broad terms, this means qualitatively assessing for traits, but also using molecular biology methods to look at resulting protein expression, gene levels, and molecular interactions caused by eliminating the gene.

As Project Lab expects a long “research paper” at the end of the semester, I have been in lab consistently over 30 hours per week running assays and getting results. I used to dislike research because I didn’t like how all the trials take so long and they keep on failing, but the biggest lesson that I learned this semester is that once you really come to understand your project, like really understand the work that you do, then most of the research doesn’t seem like a chore and you actually start becoming excited about designing new assays and keep pushing towards demonstrating/disproving your research hypothesis. In a sense, I guess I can say that I truly felt like a real scientist this semester, and the fruits of my labor have more than justified all the time that I have been spending in lab (I started keeping a blanket in the cabinet near my desk because I nap on the lab couch so much while waiting for gels to run or blots to transfer :P)

But yeah. I want to show you my bench! (I finally upgraded to a full bench this year – which I’m really happy about :P) 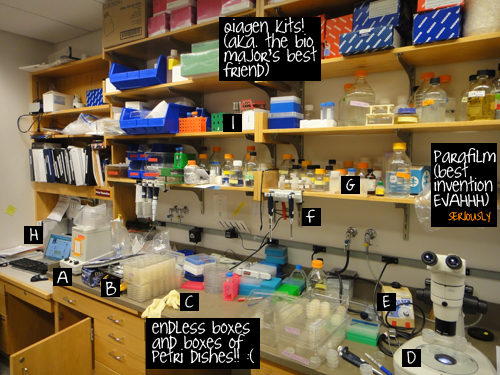 The worms live on petri-dishes and feed off E. coli – one special thing about C. elegans is that they are so easily to maintain. You basically just need to give them food, keep them at a reasonable temperature, and they feed happily off the bacteria and reproduce like mad (most of the time essentially making copies of themselves). This also enables us to run trials with thousands of worms at a time, which is something that is not possible with mice (can you imagine 1000 mice running amok? I think even the Pied Piper will have a tough time with that). Prospective bio majors – you will soon come to know the magic that is Qiagen kits, and Parafilm is honestly up there in my list of “Most Amazing Inventions” – alongside plastic soap boxes for traveling and French fries vending machines. I’m seriously considering asking the lab whether I can keep a box of Parafilm with me when I graduate because there are so many amazing uses for it, haha. I really don’t understand why they aren’t selling Parafilm in stationary stores alongside packing tape – it’s seriously just as useful, IF NOT MORE THAN regular packing tape! :P OK, that’s enough about Parafilm. (disclaimer: I am not employed by the Pechiney Plastic Packaging Company :p)

A – Microcentrifuge. Make sure you keep the lid on to reduce to the noise when you spin samples.
B – Hot plate. This thing is amazing – it goes from like 25 C to 200 C in a matter of minutes. I seriously wish I had one in my dorm to cook noodles with :P (ok MIT Facilities – I’m just kidding!)
C – Gloves. I wear them, but I quickly notice that none of the postdocs in the lab really ever wear gloves unless working with seriously, seriously toxic compounds. Do your years in the lab make you immune to normal chemicals…? o_____o haha
D – Really awesome microscope that I use to do worm work. Seriously, this microscope is like the Lamborghini of microscopes…whereas the one I used in AP Biology was probably equivalent to a Ford Model T – with the wheels falling off, at that.
E – Vortexer. Gives an adequate lower arm massage when protocol calls for vigorous vortexing.
F – Pipettes. Every time I think about it I still chuckle – when I was a wee froshie, my first lesson in the lab was learning how to use a pipette, and literally “practiced” by pipeting water from a beaker to another beaker for a good half hour. Now, I pipet easily hundreds of times every day without even registering it. As a biology researcher, not being good at pipetting is like trying to fight without knowing how to hold the sword properly – hence the pipet is also jokingly known as the biologists’ “sword” (you’ve got to see last year’s Biology Halloween party, where a pirate with a sword faced off against a lab nerd wielding a pipette :P it was a formidable match.)
G – Chemicals. Bottles and bottles of chemicals that I seem to be constantly making. Sometimes I really look up and wonder who figured out that you need to add MgCl2 when you make worm growth media, or that TBST can be used to wash nitrocellulose membranes (where did those membranes come from, anyway?). There’s also a bottle of CHOLESTEROL IN SOLUTION on that shelf. Does drinking from the bottle directly give one an immediate heart attack? ;)
H – My desk!!! Yayy after so many semesters of working in lab I finally feel legit to have my own “space” now in a corner of MIT’s campus. You can see Fuzzy, my laptop, which had always been faithfully with me through the trials and adversities of MIT. She’s getting pretty old though, and the internal keyboard and trackpad no longer work – hence the new peripheral parts, sadly. Even computers get worn out by the labors of MIT :)
I – Eppendorf tube and conical holders. We joke that they’re always brightly colored (check out the neon red, neon orange, and neon green holders on my bench) to make labwork a bit less depressing when it’s 2 in the morning, and you still have more than 100 PCR reactions to run. :P

My results for the lab class are due November 9 (less than two weeks from now!) so I’ve been putting in a ton of extra work into lab to start wrapping up loose ends. A few days ago, I was counting worms under the microscope for an assay that I was doing, and after 3 hours I had counted the equivalent of almost three thousand worms manually by physically removing them from the plate (not estimation!) 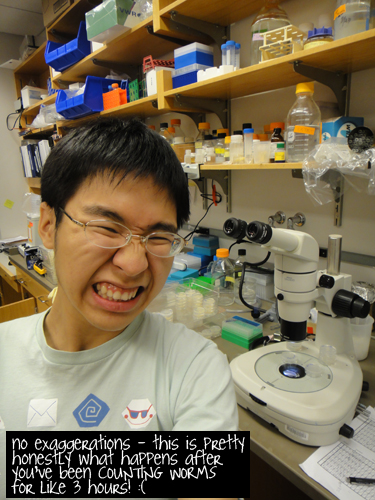 ps. All jokes aside, working in a lab is awesome at MIT. There are very few institutions that will give undergraduates such full access to wet lab work, and what I am doing is conceptually on the same footing as any work done by the graduate students and postdocs in my lab. Yes, I may run less trials and progress at a slower speed because I’m still a student and I have to go to lecture, do my problem sets, and take exams, but at the end of the day, my results are still taken seriously by the other members of my lab, and I’m not just a random “clueless undergrad” who is simply in charge of washing beakers and pouring plates. I really appreciate how MIT professors and researchers view undergraduates as an integral part of the research team, even though we are decades younger than they are in most circumstances. I have always thought that pure molecular research is not necessarily the right future career path for me, but I can’t help falling in love with the excitement of obtaining a critical result at midnight after several days of running experiments. It gives me an adrenaline rush like no other. :P

(even if you don’t take a lab class, most MIT students work in the lab through the UROP Program, which pays students to work in MIT laboratories (at least at the base rate of $9.25 per hour) – it’s a win-win situation: laboratory work teaches students many vital skills not covered in normal biology lab class (I didn’t know how to use a flourimeter or how to cultivate large populations of worms and perform assays until I joined a research lab), the labs get extra manpower, and the students get fed very comfortably through the pay (several of my friends make upwards of thousands of dollars per semester just by working in lab). I have yet to see a university that is so supportive of undergraduate research as MIT – honestly, MIT realized long ago that instead of telling you and belaboring the peculiarities of Western Blotting to you in somnolent lecture halls, you should just go and run a Western for yourself, and you will fill in the gaps along the way. It always comes down to our motto – Mens and Manus – and I can’t agree with this aspect more :P)

pps. Since I look at thousands of worms every day, the first thing I thought of for Halloween was C. elegans -______-” (I’m very nerdy, I know) – but I quickly dismissed that thought because how does one dress up as a featureless, semi-transparent, microscopic worm? :( haha. Why didn’t I work with Drosophila?! HAHA – that would be a sweet costume ;)

12 responses to “My Second Home”